A subscriber had some questions about the Percent Buy Index (PBI) versus the Bullish Percent Index (BPI). The PBI is my creation, and it tracks the percentage of Price Momentum Model (PMM) buy signals for the components in a given index. (In the case of this discussion we will be looking at the PBI for the S&P 500 Index.) The BPI was, I believe, created by Tom Dorsey, who is a highly regarded expert on point and figure (P&F) charting. The BPI tracks the percentage of P&F buy signals in an index.

To clarify, as far As I know the BPI was introduced long before we got the idea for the PBI, but we started collecting data on the OEX PBI many years before we even heard of the BPI. I think that is called "reinventing the wheel." Nevertheless, there are significant differences between the timing models that drive the BPI and PBI.

As I said before, the BPI uses buy signals generated on P&F charts. I'm not going to go into how P&F charts are made, but suffice it to say that they are nothing like a standard bar or line chart that we normally use for charting, nor are the buy signals they generate. I don't use P&F charts because I don't find them intuitive enough for me, but many people do use them with great success, and more power to them.

On the chart below we can see how both have performed over the last three years. I think they are remarkably similar, except for the period I have highlighted in the red rectangle, which was during the last six months of the bear market and prices were getting thoroughly hammered. As you can see, the BPI was quite volatile, showing a spike of over 70% of buy signals well ahead of the final price low. Conversely, the PBI correctly stayed flat during that time and did not start a strong up trend until the final price low was in place.

As I have said many times, every mechanical model has its weaknesses, and in this case we can see the weakness in the P&F model. Specifically, expect volatile signals during periods when there is severe price decline -- the P&F model apparently triggers too easily in these circumstances. 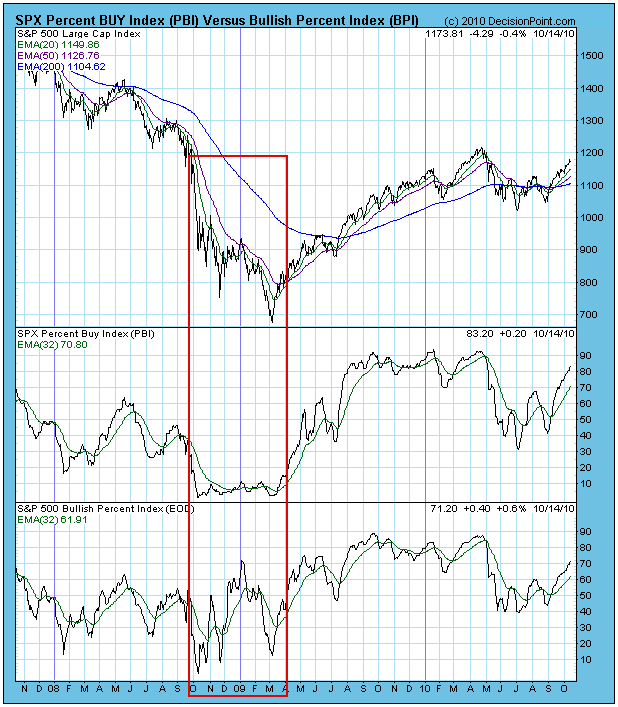 We use a PBI 32-EMA crossover to generate buy and sell signals, but the PBI has a finite range, and these crossovers will generate some noise when the PBI is near the top or bottom of its range. It is most reliable in generating buy signals from the bottom to the middle of its range.

Currently, both the PBI and BPI are becoming overbought. If we are in a condition similar to what we were in mid-2009, I don't think that will be a problem. In other words, the indicators can remain overbought for some time while prices move higher.

Conclusion: The PBI and BPI have a similar objective of tracking the number of buy signals for the components in a given index, so we can estimate the kind of participation is behind price moves. The PBI seems to be more stable, particularly during severe price declines.