The ability of any stock index or group to clear its April high is a sure sign of strength. In case you haven't noticed, the Semiconductor Holders are doing just that today. I point that out because, up until a couple of months ago, chip stocks were market laggards. Chart 1, however, shows that's no longer the case. Not only is the SMH clearing its April, high, but the SMH/SPX ratio (below chart) has been rising since early September. A number of individual stocks in the group have hit new 52-week highs including (in order of size) Texas Instruments (TXN), Analog-Devices (ADI), Altera (ALTR), Linear Technology (LLTC), Broadcom (BRCM), KLA-Tencor (KLAC), and Novellus (NVLS). One of the biggest chip stocks (which is often viewed as a group bellwether) is Intel which has been a group laggard. But it too is is starting to look a lot stronger. Chart 2 shows Intel trading at a new three-month high after clearing a six-month down trendline and its 200-day moving average. The strong upturn in semiconductors also carries good news for the broader market since it's a big part of the technology sector. And the market is usually stronger when the technology sector (and the Nasdaq) are leading it higher. Another heavily weighted chip stock, Applied Materials, has also just cleared its 200-day line (Chart 3). 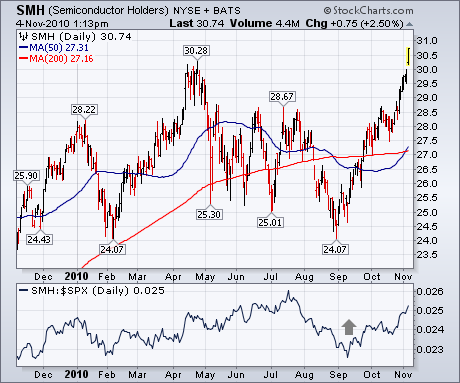 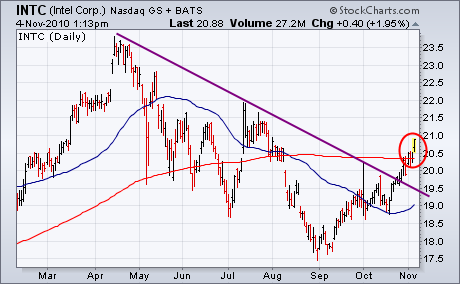 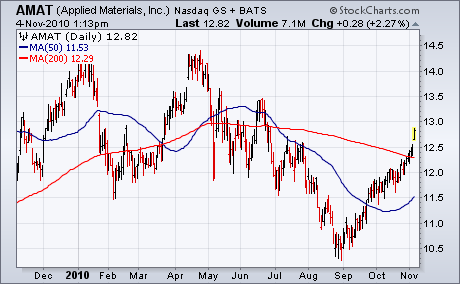