We have written several messages of late about the recent upturn in financial stocks that had been lagging behind the rest of the market since the spring. I expressed the view that a sustained upturn in the stock market was unlikely without some help from the financial sector. Fortunately, financial stocks have finally turned up and have actually shown market leadership during December. Another market group that's been weighing on the overall market has been housing. And even that sector is beginning to show some improvement. The first three charts show three measures of the housing sector and all three have risen to seven-month highs after clearing their 200-day moving averages. Chart 1 shows the PHLX Housing Index (HGX) having broken through its July/November highs. Chart 2 shows the S&P Homebuilding SPDR (XHB) breaking clearing its November high on rising volume. Chart 3 shows the Dow Jones US Home Construction iShares (ITB) having just cleared its 200-day line. The relative strength lines below Charts 2 and 3 actually show a little leadership during the month of December. I'm not necessarily expecting housing stocks to show much upside leadership. Any signs of strength in that group, however, should be a further hint at an improving economy and a stronger stock market. 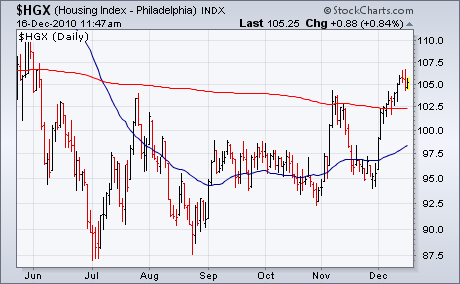 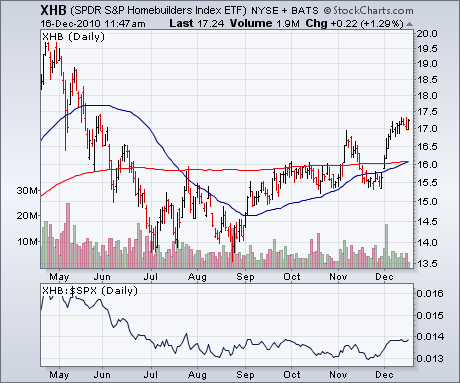 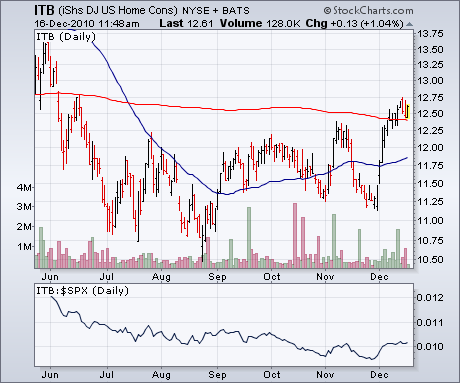