The recent gold price rally to new highs has paled in comparison with silver's seemingly parabolic move higher. While many "johnny come latelys" play in the silver pit, we are rather interested in the manner in which the Gold Stocks ETF (GDX) has performed relative to Gold itself. And we what we see is that GDX has lagged the gold rally badly. However, we believe this is about to change and perhaps on a very material manner. 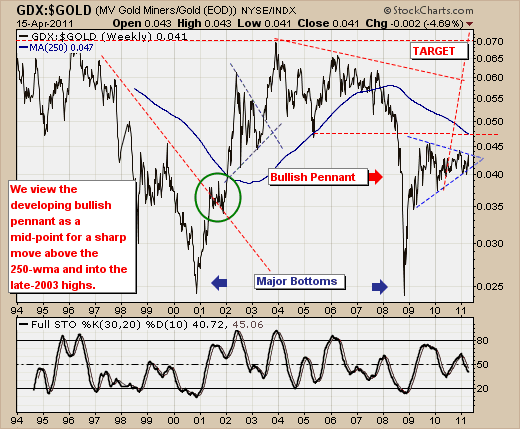 The GDX:GOLD ratio chart is very instructive, for this weekly chart shows a very well built and very bullish "pennant formation", which generally resolves itself in a sharp thrust higher. If this were to occur, then GDX could outperform GOLD by 2-times, which would be similar in nature to the move off the late-2008 lows into the late-2009 highs before the pennant began to take shape. Of course, this chart would resolve itself in the manner anticipated, with GDX moving lower, although not to the same extent as GOLD prices. So, while we do believe GDX is poised to move higher - it could simply consolidate lower as GOLD prices moved sharply lower.