Relative weakness in small-caps remains a concern for the broader market. Smaller companies are less diversified and have less exposure abroad, which makes them more vulnerable to changes in the domestic economy. As such, small companies are like the canaries in the economic coal mine. They are the first to benefit from an upturn in the economy, but also the first to suffer from a slow down. Chartist, therefore, should keep an eye on small-cap performance for clues on the economy. 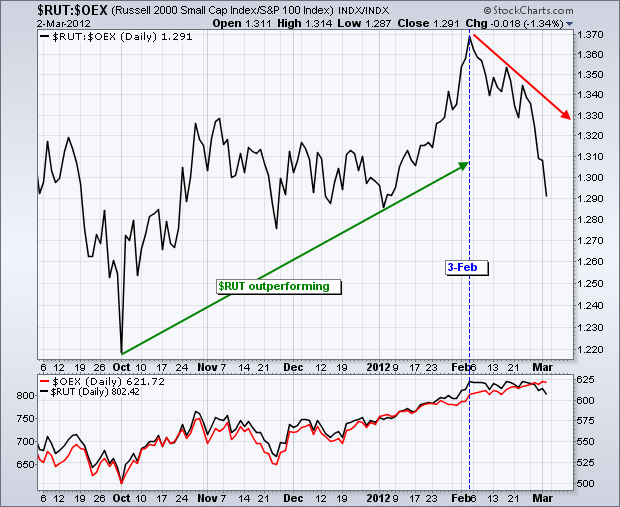 The chart above shows the performance of the Russell 2000 ($RUT) relative to the S&P 100 ($OEX) using the Price Relative ($RUT:$OEX ratio). This ratio rises when small-caps outperform and falls when small-caps underperform. Small-caps outperformed in October and January with a bout of flat performance in between (November-December). February was a different story as the $RUT:$OEX ratio fell rather sharply and continued lower the first two days of March. Life is tough for indices that do not include Apple, which features in the Nasdaq, Nasdaq 100, S&P 100 and S&P 500.The blue dotted line marks the start of underperformance on February 3rd. With the Russell 2000 breaking its February lows on Friday, it looks like small-caps are starting a correction that could extend to the broader market.