The S&P 500 rally continues unabated, although it has shown some signs of wear and tear given the less-than-hoped for volume patterns as well as advance/decline patterns. However, it is clear that this type of market condition does not preclude prices from moving higher and forming major negative divergences over time. Presently, we should note that the 160-week moving average has bottomed, which suggests the rally has further upside left in it, with any and all corrections - at this point - seemingly nothing more than garden variety corrections. 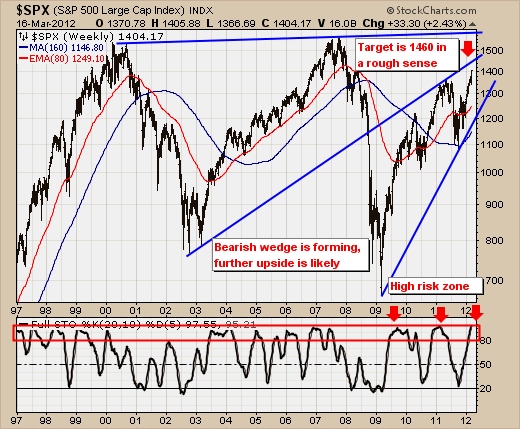 However, note that prices are now overbought via the 20-week full stochastics; which simply means the rally is growing more risky by the week. The simple speed resistance trendlines we've drawn indicate that the rally could take prices higher towards the 1460 level before any real weakness materializes. Moreover, and not shown on this chart is that prices are roughly +21% above the 160-week moving average - which is about 2 percentage points below its "speed limit" of +23% that has resulted in corrections over the past 2 decades. If prices exceed +23-to-+25%, then the past 2 instances (1985 & 1995) have shown prices to be in an upward "bubble-like" advance. So, if the S&P rallies much more off current levels - then we'll have to look for a massive spike higher towards the 1700 level in the next 2-years. This would be fed by funds leaving US and world bond markets in search of higher yields. This is the risk at present; and we'll give it more than "even" shrift of occurring given the massive amounts of liquidity force-fed into the world monetary system.