In my last article, I featured a weekly NASDAQ chart and pointed out that the MACD was coming up off the centerline and pointing higher.  I indicated this was a very bullish signal for the intermediate- to longer-term and supported my belief that equity prices would continue to rise in 2012 - at least until technical indicators begin to change.  I received several responses to that particular chart, with readers correctly pointing out that there was a long-term negative divergence present on the chart.

I won't argue with the fact there was a negative divergence - by definition.  After all, prices were higher and the MACD was lower.  But I interpret divergences different than most.  Momentum moves back and forth like a pendulum.   As this pendulum moves back and forth, the MACD "resets" at the centerline in my opinion and we start the game all over again.

First, let me show you the negative divergence that readers were referring to on the weekly chart of the NASDAQ: 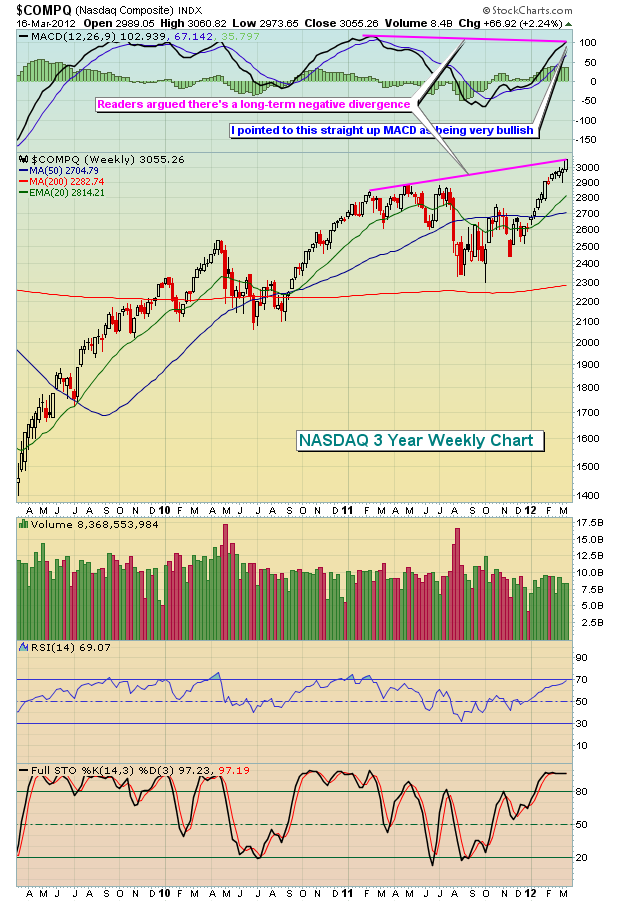 Again, by definition, that's a negative divergence.  But is it really a sign of slowing momentum?  Think about what the MACD represents.  It's the difference between a 12 period EMA and a 26 period EMA.  On a weekly chart, that means that once 26 weeks elapse between MACD readings, there is ZERO common data in the two MACD calculations.  I think it's back to that old adage "comparing apples and oranges".  In late 2010, we had exactly the same situation on the weekly chart of the NASDAQ.  Take a look: 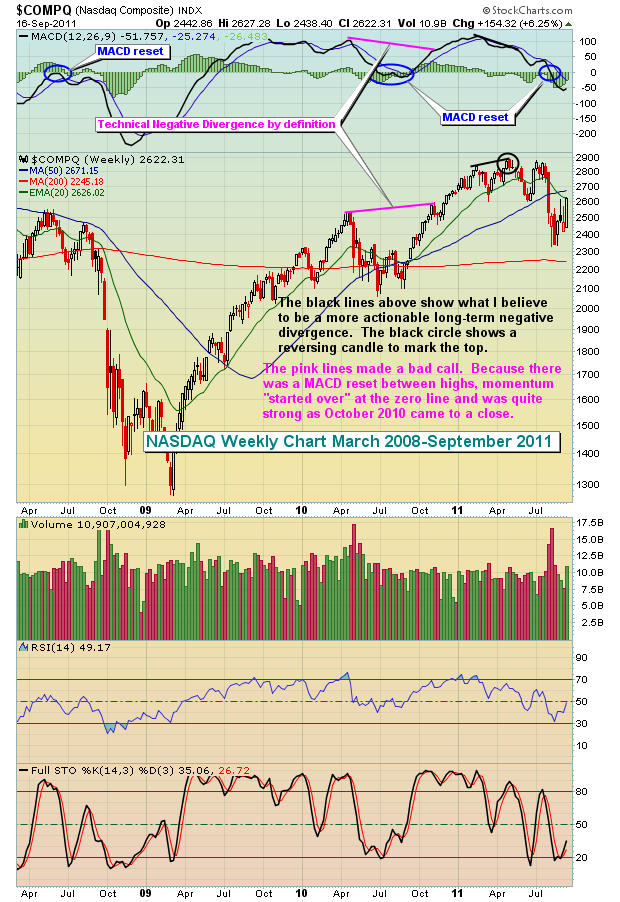 Again, this is MY interpretation and what makes sense to me.  Feel free to disagree.  Like I said before, by definition there is a negative divergence present.  But it doesn't indicate slowing momentum in my view.  Instead, I see strengthening momentum.

If you followed the technical definition of a negative divergence, you'd have missed another 10% move higher in early 2011 before the REAL negative divergence printed.  As we look ahead to the balance of 2012, we have a very similar MACD on the weekly chart.  The MACD has moved up from the centerline and is pointing higher as new price highs are reached.  It's telling us that the shorter-term 12 week EMA is "diverging" away from the 26 week EMA.  This represents strengthening momentum, not weakening momentum.  A pullback can occur anytime, but it's unlikely that we'll see anything stronger than a normal correction during a very strong uptrend.

I am hosting a FREE webinar on Wednesday, March 21, 2012, to discuss the concept of the "MACD reset" and how it impacts momentum analysis.  If you use the MACD in your technical analysis, you'll find this session to be invaluable.  To learn more, CLICK HERE.