Even though the S&P 1500 Index ($EIS) is trading near its spring highs and within a few percent of a 52-week high, Net New Highs have shown less strength since early July and divergences have formed. Keep in mind that less strength is not the same as weakness. New highs are still outpacing new lows, just at a lesser rate. The chart below shows US Net New Highs ($USHL) in the indicator window, the cumulative Net New Highs line in the main window and the S&P 1500 Index. $USHL equals NYSE and Nasdaq new highs less NYSE and Nasdaq new lows. Think of it as new highs and new lows for the market overall. The S&P 1500 Index combines the S&P 500, S&P MidCap 400 and S&P SmallCap 600 into one large index. 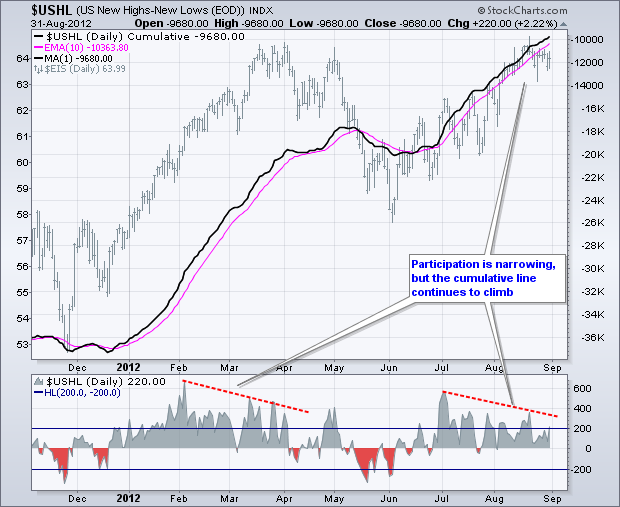 Net New Highs remain bullish overall, but a bearish divergence is brewing and this should be watched closely. Notice how US Net New Highs peaked near +600 in early July and then formed lower highs. Even though the index is up significantly since early July, Net New Highs have not expanded past +400 since early July. This indicates that participation in the advance is narrowing. Nevertheless, the bulls still have an edge as long as new highs outpace new lows. The cumulative Net New Highs line continues to rise and remains above its 10-day EMA. A break below this moving average would reflect an increase in new lows and turn the indicator bearish.