Last's week's early market rally seemingly disavowed all the bad news; which is of course what this market has been doing since the summer. However, we may be premature - but we are certain the market is changing its stripes from focusing upon "benefits" and tail-wind of QE-3; and focusing more upon the poor earnings and revenue reports coming out of corporate America. Quite simply, the European and Chinese slowdowns were bound to have an impact upon US stock prices; it was only a question of "when" within the context of an increase in monetary liquidity. Note the Google (GOOG) debacle this week; note the poorly received Microsoft (MSFT) figures - and one gets the sense that Technology in general has already made its bull market highs and lower lows lie ahead. 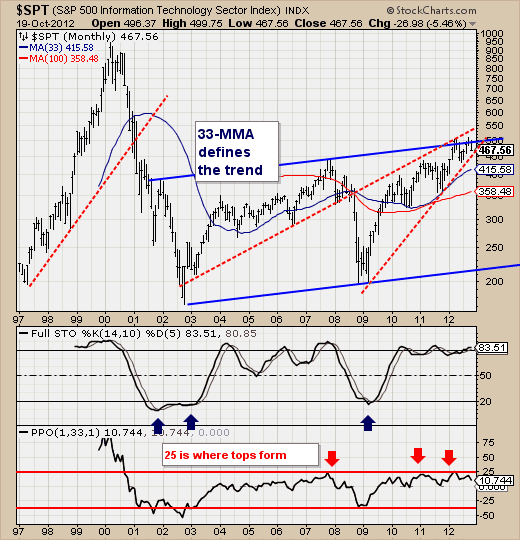 To that end, we've provided a monthly chart of the S&P Technology Sector, which is a longer-term outlook of where we have been, and the critical resistance/support levels that are in play. First, note the bearish rising wedge off the 2009 lows, which failed into overhead trendline resistance from an amalgamation of highs and lows. This seems to be rather important, for prices aren't likely to breakout above the highs forged in September. And if that is the case, then we must be worried about rising trendline support off the 2009/2011 lows...and prices are hard upon it. Further weakness will break this important support level, which would put the 33-month moving average in play at 415 as well the 100-month moving average at 359...a full 20%+ below current levels.

Therefore, technology buyers beware...there are lower prices upon which we'll be able to be comfortable buyers...but not here and not now.