It has been 25 years since the 1987 Crash, and I thought it would be a good time review a few things that probably won't be covered elsewhere in the media. I may have covered these issues in the past, but a refresher can't hurt.

One thing that some analysts like to do is to note the similarity of past price patterns to current price patterns, implying that the current pattern will resolve similarly to the historical example. In 1987 we have an example of how dangerous such assumptions can be.

On the chart below I have circled two price patterns that are remarkably similar. Each has a double top, then a double bottom, then a rally out of the double bottom, which fails, then a pullback to the support level. At that point what follows is radically different. In example #1 prices rally to new, all-time highs. In example #2 prices dive into one of the worst crashes in history. Lesson: Just because history rhymes doesn't mean that the ending will be the same.

Next, one might ask if there were any technical warnings? For the answer, let's look at a chart of our Intermediate-Term Breadth and Volume Momentum Oscillators (ITBM and ITVM). On the price line there is a top in August 1987 that is higher than the previous top in June. Corresponding tops on the ITBM and ITVM show a negative divergence, a bearish indication.

A more serious negative signal occurs at the final top in October before the crash, when the ITBM and ITVM both top below the zero line (see arrows). 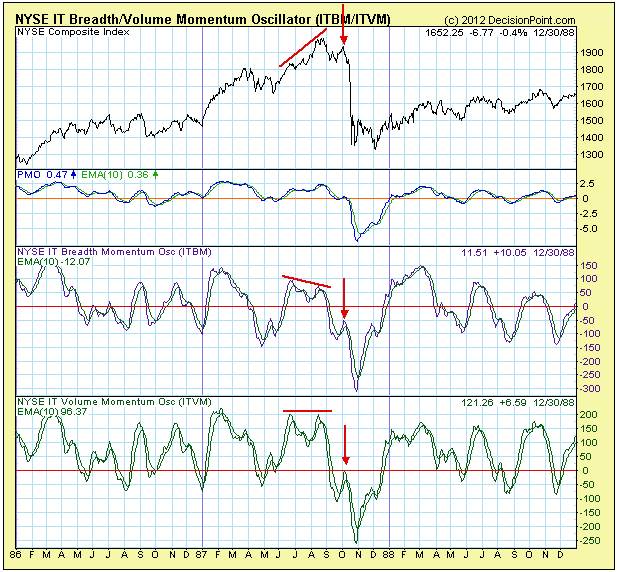 To be fair, in hindsight the signs are always obvious, and there is a lot of ambiguity in real time. Nevertheless, negative indicator signs viewed in the context of the final breakdown of price below support just before the crash is pretty strong evidence, and there was adequate warning to take action.