Click here to see the live version Click here to see the live version
×
The Directional Movement Indicators have equalized as trading turns flat for the Dow SPDR (DIA), but the overall trend remains up as the ETF tests its first support zone. Let's look at support first. DIA hit 144 on March 11th and then traded flat the last few weeks with several crosses of this level. DIA dipped to 144.05 in early trading on Friday, but rallied after the weak open and closed above 145. Support in the 144 area extends from the mid March consolidation. A move below the consolidation lows would break support and argue for a deeper correction, perhaps to the 138-140 area. 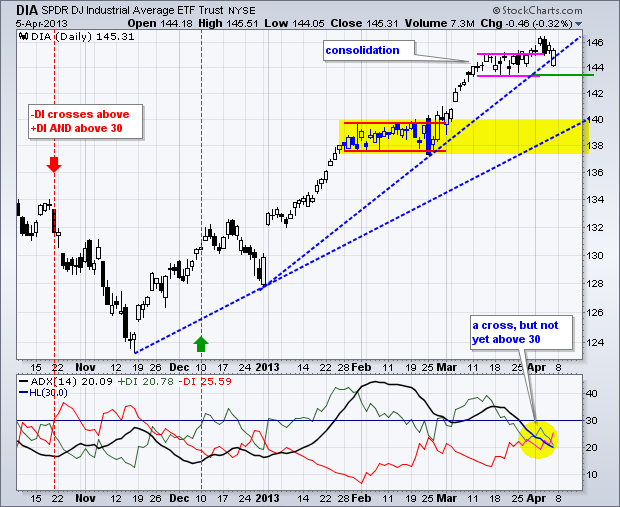 The indicator window shows the Average Directional Index (ADX) along with Plus Directional Movement (+DI) and Minus Directional Movement (-DI). +DI (green) crossed above –DI (red) on December 5th and exceeded +30 to kick off the current uptrend. I am using 30 to confirm crossovers and reduce whipsaws. Notice how +DI has moved above/below 30 since December, but –DI has yet to exceed this level. Most recently, the indicators converged in the low 20s as directional movement flattened and –DI crossed above +DI this week. Even so, the bulls still have the edge because +DI was the last one to exceed 30. –DI would have to break above 30 to confirm this crossover and reverse this edge. You can read more about these indicators in our ChartSchool.

Made in Manhattan!
--Arthur Hill CMT