The 7-10 YR Treasury Bond ETF (IEF) is challenging resistance and a breakout would have negative consequences for stocks. Stocks and Treasury bonds are negatively correlated because they march to the beat of different drummers. Treasury bonds move higher because of deflationary pressures, signs of economic weakness or both. We could be getting a little of both recently. Gold, oil and copper fell sharply in April and this is more deflationary than inflationary. Economic reports have been soft over the last few weeks and first quarter earnings have largely disappointed. After earnings season, our next big batch of economic reports will hit in early May. 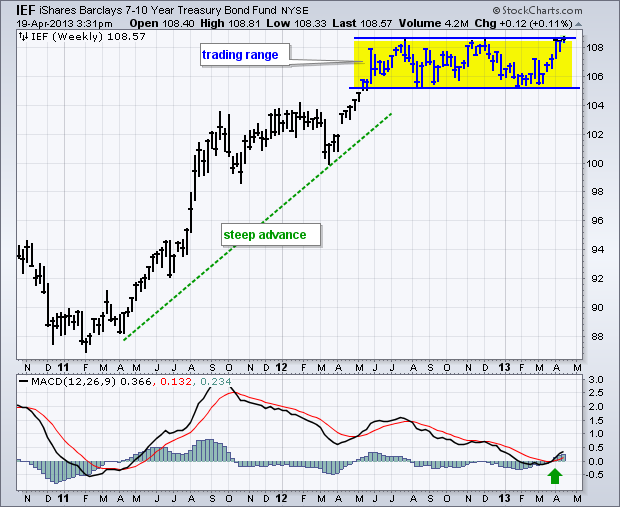 The first chart shows the 7-10 year T-Bond ETF (IEF) moving to the top of a trading range that extends back to June 2012. The ETF moved sharply higher from February 2011 to June 2012 and then traced out a flat trading range. Technically, a flat range after an advance is a bullish continuation pattern and a breakout here would signal a continuation higher, which would be negative for stocks. The indicator window shows MACD turning up, breaking its signal line and moving into positive territory. Momentum is bullish. The second chart shows the 20+ Year T-Bond ETF (TLT) breaking above the upper trend line of a falling wedge. This surge and breakout signal a continuation of the bigger uptrend. It would take a quick move below 120 to negate this breakout. 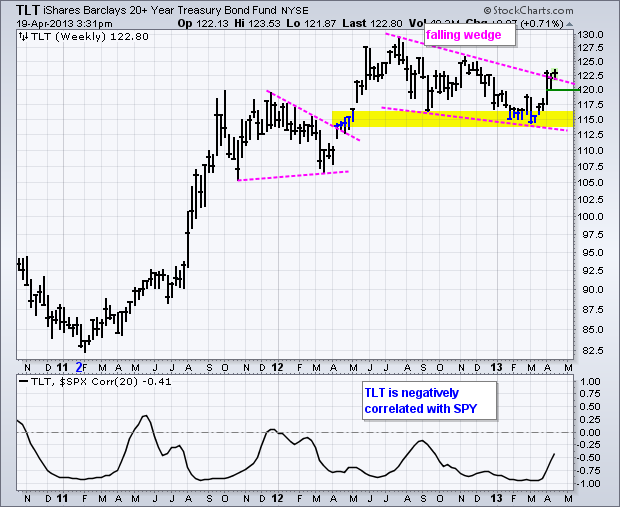