This past week, the monetary policy world shook once again as the Bank of England and the European Central Bank provided the markets with "dovish" comments regarding leaving o/n funding rates low "for an extended period of time." This was clearly reminiscent of the Fed's proclamation some years ago; and served to buttress a move into risk assets. Whether or not this is the case this time is up for debate, and will be known in the fullness of time. 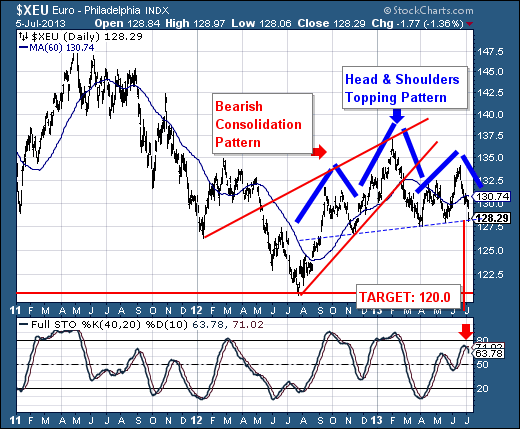 However, what we do believe to be true is that the British Pound Sterling and Euro are embarking upon declines that will carry them very sharply lower. In particular, our focus is upon the Euro chart, and the fact that a larger bearish consolidation was confirmed in February, with prices simply consolidating since then. But, the fact of the matter is that during this time, a right shoulder of a bearish "head & shoulders" top pattern has formed, of which neckline support is on the verge of being given. We believe the odds are rather good for such a decline given the 40-day stochastic is just now turning lower from less than overbought levels.

The downside target measurement is 1.2000...a full 8 "big figures" from current levels. However, let us forewarn our readers, a move to this level would cause significant long-term technical damage on the monthly chart (not shown). Quite simply, this would break the neckline of a 10-year "head & shoulders" top pattern, which would then target the 2001-2002 lows near .9000.

In any case, the bottom line is that it is proper to be sellers of Euros at current levels - now and into the future as both the fundamentals and technicals are lining up in proper order.