Last week's trade was rather bearish from a technical perspective, for many of the US and world indices forged "bearish weekly key reversals" to the downside. To us, this suggests that a larger correction is underway - perhaps -10%...but perhaps a greater percentage. For now, one can only say that a correction is warranted; it appears here - the question is only one of depth. 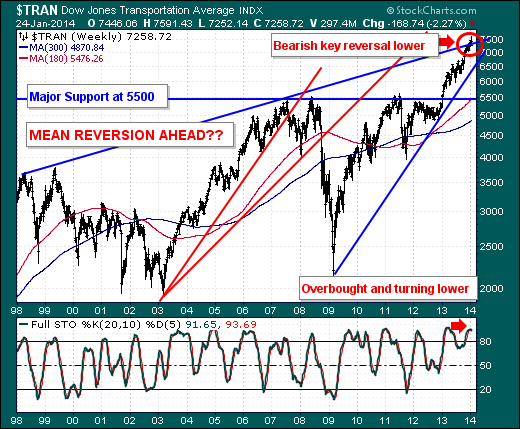 To this end, we are focused upon the Dow Jones Transportation Average ($TRAN), for it was a leader for the rally higher. Quite simply, longer-term trendline resistance connecting the 1998-2007 highs has been tested, and a bearish weekly key reversal lower has formed. Moreover, the 20-week full stochastic has turned lower from overbought levels, which supports further weakness. In terms of next-level weekly support, we have to drop all the way back to the January-2013 breakout point above the previous highs at 5500 - as well as the 180-week moving average. A return to this level would imply a rough -27% decline...which would classify as a clear bear market. A signal this scenario is underway would be a breakdown of trendline support at roughly 6500.

Hence, there is risk in being long at the present time - and rarely does one have the benefit of weekly key reversals to the downside to manage one's risk. Be prepared.