Make no mistake about it, I prefer to be bullish.  History supports this notion because the stock market has always tended to move higher more than it moves lower.  Dating back to 1950, the S&P 500 has moved higher over 53% of trading days.  Did you know that the S&P 500 has finished lower only 6 of the past 32 calendar years?  Three of those down years were consecutive years from 2000 through 2002.  Of the other 29 years since 1981, only 3 were lower.  There's an undeniable bias to the upside in equities over the long-term, so you really have to pick your spots and limit your overall bearish views to periods where the market is literally beating you over the head with warning signs.  I don't yet have a concussion, but I have to admit I'm getting a little "woozy" from the recent market body blows.

This is NOT a healthy market advance and unless it changes soon, I'd continue to grow more and more cautious.  The good news is that volume trends and momentum remain primarily in the bulls' corner and that could support higher prices in the very near-term.  Before we look at charts to see the issues visually, just consider the numbers.  Last week, the S&P 500 and Russell 2000 both set all-time closing highs, but I have to question the leadership of this rally.  Here is your sector performance leaderboard in 2014:

I grow uneasy when the four aggressive horsemen - technology, industrials, financials and consumer discretionary - lag when the stock market moves to fresh highs.  It's an indication that there's really not a lot of faith in the move to the upside.  If those investing and creating the breakouts have no faith in the advance and are not willing to take big risks, why should I?  And why should you?

Money is flowing towards safety.  It's moving towards income-oriented investments.  I want to see money flow into areas where investors seek capital appreciation.  That's not apparent right now, however, as treasuries, healthcare and utilities are all attracting much more than their fair share of investment dollars.

While the S&P 500 gained 4.3% in February, the 10 year treasury yield ($TNX) didn't budge higher.  Put another way, a true equity market rally should see a selloff in treasuries (and higher yields), but it didn't happen.  In fact, the yield is significantly lower now than it was to start the year, despite a rise in the S&P 500.  Investors are keeping their umbrellas out.  They're not trusting this rally.  Check out the $TNX chart: 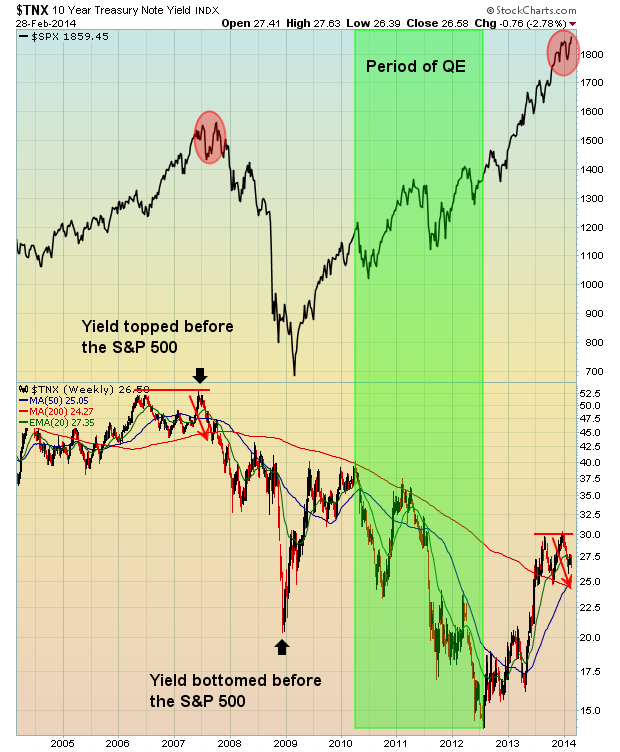 Financials have significantly underperformed the defensive healthcare and utilities sectors in 2014.  What I find most interesting is that if you break down the industry groups within the financial sector, you'll see that financials are being held up by the REITs, which are big dividend payers, or safety stocks.   Look at this chart of the Dow Jones U.S. Financial Index and the relative performance of banks ($DJUSBK) and REITs ($DJR) vs. the S&P 500:

While the XLF (ETF that tracks the financial sector) remains in an uptrend, note that this influential group has not broken out like the S&P 500 and, if we dig a little deeper, we see that what strength the financials are showing, it's from REITs, not banks.  The relative charts in 2014 are eye-popping.  REITs, on a relative basis, lagged the S&P 500 badly throughout 2013 and that makes sense during a sustainable bull market rally because traders are seeking capital appreciation.  They take risks.  But fast forward to 2014.  The S&P 500 once again breaks out, but REITs are now in favor.  What does that tell you?  It tells me that there are a lot of investors that are not backing this rally in equities.

Finally, banks are the backbone of any period of economic strength because they provide the credit to businesses needed for expansion.  When banks struggle on a relative basis, I get nervous.  2014 has not been kind to banks.  Take a look at the relative strength line of banks vs. the S&P 500 over the past two months.  It made sense for banks to take a hit in January, but the February rally did little to get traders excited about banks again.  That's bothersome.

On Wednesday, March 5th, I'm hosting a FREE webinar to discuss ALL of the warning signs currently in play, along with potential future warning signs that could corroborate that a bear market is approaching.  For more information, CLICK HERE.