In my last article, I posted a chart of the Russell 2000, identifying a potentially bearish head & shoulders pattern.  This pattern, however, requires a high volume breakdown to confirm the likelihood of future weakness.  That breakdown never occurred and small cap bulls used historical bullish tendencies from late May and early June to send small caps spiraling higher.  From the May 15th low to Friday's high, the Russell 2000 delivered spectacular gains - rising 7.64% in just three weeks!  The question now becomes, "Can small caps sustain their recent rally?"  That's where it gets interesting.

First let's take a look at the updated technical outlook: 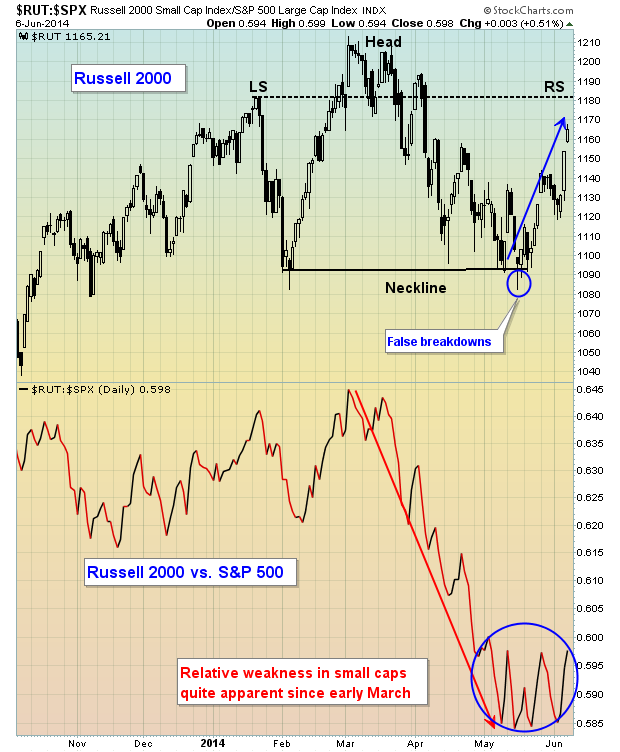 The blue arrow shows the price spike over the past few weeks, but note that the blue circle shows that, on a relative basis, the Russell 2000 still has a LONG way to go to regain its leadership role.  That is somewhat bothersome.  It's more bothersome when you realize what a lagging small cap market can mean to future equity prices.  Check out this relative chart going back 10 years:

In 2007, money began flowing away from the aggressive Russell 2000 BEFORE the S&P 500 actually topped.  That same defensive money flow took place in consumer stocks as the XLY:XLP ratio never printed a new relative high in 2007.  Again, market participants were posturing in defensive names PRIOR to the bull market top.  Fast forward to 2014.  The S&P 500 keeps setting all-time highs, which on the surface appears to be quite bullish.  But under the surface, there's been considerable deterioration in a couple of key indices/ratios that question the duration of this advance.  I'm not saying that equity prices cannot go higher because many times bull markets rage on much longer than any of us would think possible.  Clearly, however, there are question marks regarding this advance.  Over the past several weeks, there's been a massive rotation in consumer stocks with staples (defensive) names in demand.  Their discretionary counterparts have been very weak on a relative basis and that needs to change to improve the chances for sustainability of the current bull market.  Also, the Russell 2000's recent performance has been strong, but there's much more relative work to do before declaring this bull market in full swing again.

The European Central Bank (ECB) came to the defense of global equity markets on Thursday, lowering key interest rates and spurring across-the-globe buying.  Fund manager David Tepper appeared on CNBC, suggesting that the ECB's actions help alleviate some of his concerns about equities.  That combination helped equity prices climb steadily the balance of the week right up to Friday's close.

Personally, I'd still approach the stock market with a great deal of caution.  Year-to-date, the S&P 500 is up 5.47% and we still have the historically bearish summer months ahead of us.  And despite the S&P 500's modest gains, the other major indices have not fared as well with the Russell 2000 up just 0.13% for 2014.  So if you've remained cautious in 2014, you really haven't missed much.

On Wednesday, June 11th, I'll be hosting a 4-5 hour trading webinar with emphasis on using many of the features here at StockCharts to identify high reward to risk trading candidates.  For more information on this webinar, CLICK HERE.