A combination of factors pushed U.S. (and global) stocks sharply higher during the second half of the week. One big factor was the Wednesday Fed statement that it would be "patient" in raising rates next year. Another was a bounce in a very oversold oil market late in the week which gave a big boost to energy shares (which make up 8% of the S&P 500). Energy shares rose 9.5% and were by far the week's strongest sector. Material stocks (led by copper and aluminum) came in second with a weekly gain of nearly 5%. All other sectors gained on the week as well. Chart 1 shows the S&P 500 rallying sharply and nearing a test of its December high. Small caps also had a strong week. Chart 2 shows the Russell 2000 Small Cap Index breaking out to a new six month high. I wrote on Thursday that small caps usually start to do better in mid-December in anticipation of the traditional January Effect. Traders were also buying in anticipation of the traditional yearend Santa Claus rally. [Friday's unusually heavy trading was due mainly to the quarterly expiration of futures and options]. Foreign shares also jumped. 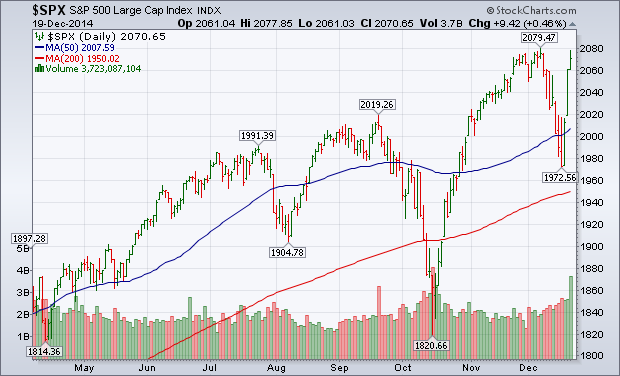 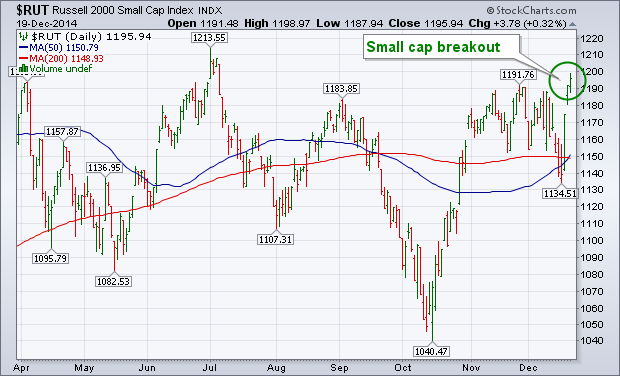