As traders, all of us hope that each new position we take on becomes a winner. Realistically, we all know that some trades will turn out to be losers. In fact, one could argue that there are really three things that are certain in life; death, taxes and losing trades!

There are way too many reasons to list why some trades turn into losses but a few of the most common include:

In looking at those above it's hard to fault someone for an out of the blue event or a sudden analyst downgrade. But misreading a chart, holding a stock into its earnings report and not taking a profit are all fixable.

Since we're right in the middle of earnings season it's a good time to remind everyone that holding a stock into an earning's report is a very risky proposition. In fact it's an unnecessary risk because there is no way of knowing how the market will respond to an earnings report. This makes it a 50-50 gamble at best, not very good odds when your capital is at risk.

In fact, to illustrate, I went back to last quarter as I vividly remember when LinkedIn reported its numbers and it missed badly. You can see from the chart below how much the stock fell when it opened for business on May 1, and how much it has continued to struggle since that big miss. 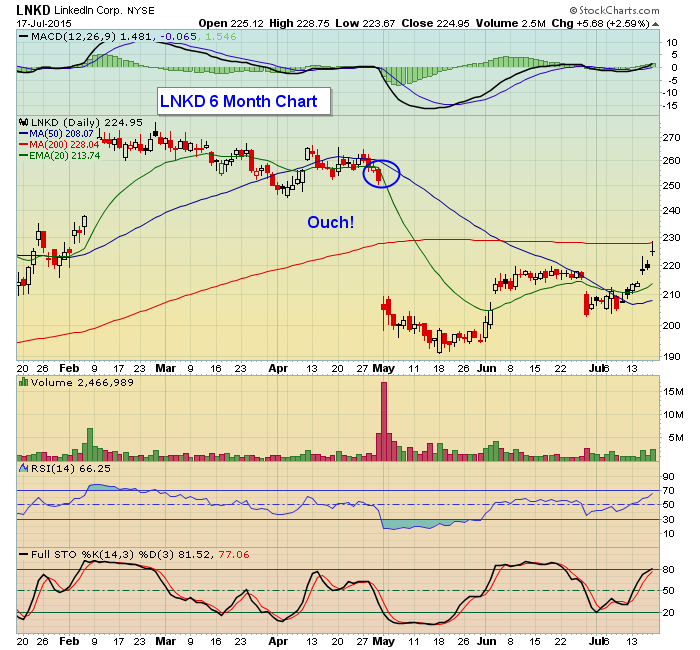 One of the reasons we've fine tuned our service at Invested Central is to avoid unnecessary risks as much as possible. It's why we've adopted our EarningsBeats.com model where we scan the market for stocks that beat earnings plus have strong charts. This way the earnings event is already out of the way and then it becomes a matter of being patient as we watch market reaction to the numbers and seek optimal entry points. There must be something to it as we've kept track of performance for several quarters now and the numbers don't lie. If you want to see for yourself just click here and I will send you full results. In the meantime, make sure you are doing everything possible to reduce your risks as a trader, including moving aside at the right times instead of standing in front of a possible train wreck.