After sharp declines the first two weeks of the year, the stock market turned into one mixed up beast the last three weeks. The PerfChart below shows three-week performance for the seven major index ETFs. All seven were down 6+ percent the first two weeks of the year, but four of the seven are up the last three weeks. These include the S&P 500 SPDR, S&P MidCap SPDR, EW S&P 500 ETF and Dow SPDR. The S&P SmallCap iShares, Russell 2000 iShares and Nasdaq 100 ETF are the losers and these three represent the high beta, or riskier, end of the stock market. Relative weakness in these three tells us that the stock market is in risk avoidance mode. QQQ is the biggest loser with a 2.7% decline over the last three weeks and IWM recorded another 52-week low this week. 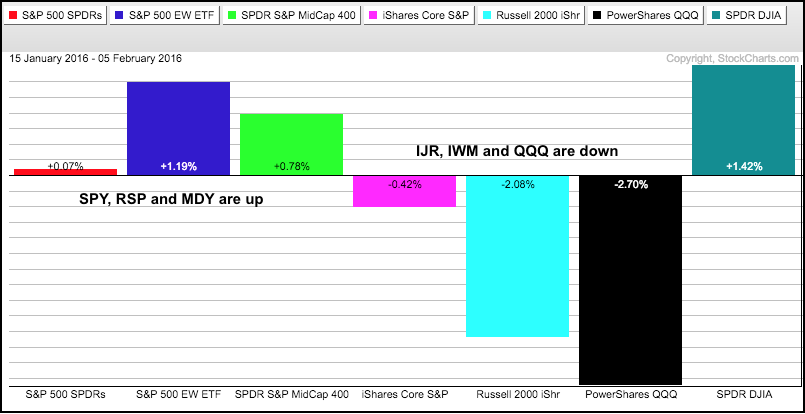 Equal-weight sector performance is also quite mixed over the last three weeks, but we can clearly see where broad market weakness is coming from. First, note that six of the nine sectors are actually up over the last three weeks. The EW Materials ETF (RTM), EW Energy ETF (RYE) and EW Utilities ETF (RYU) are leading the market with the biggest gains. These three account for 20% of the EW S&P 500 ETF. Of these three, only RYU is in a long-term uptrend. RTM and RYE are just getting big oversold bounces and remain in long-term downtrends. 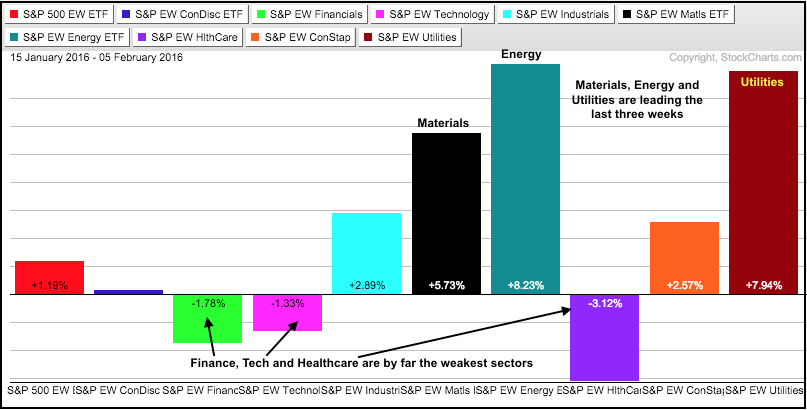 The EW Finance ETF (RYF), EW Technology ETF (RYT) and EW EW Healthcare ETF (RYH) are leading the market lower. The EW Consumer Discretionary ETF (RCD) is up fractionally, but it is underperforming its benchmark because it is up much less than the EW S&P 500 ETF. Note that these four sectors account for 57% of the EW S&P 500 ETF and this explains weakness in the broader market. Also note that it is especially bearish that the finance and technology sectors leading on the way down. Finance represents the health of the financial system and technology represents the high beta end of the stock market. Weakness in biotechs, another high beta group, is weighing on the healthcare sector.