BOND YIELDS DROP ON LACK OF INFLATION ... June's CPI report showed no change from the previous month, reflecting the absence of inflation. Its annual gain of 1.6% was the smallest since last October. Excluding food and energy, the core CPI saw a modest monthly bounce of 0.1% (for an annual rate of 1.7%). The main reason why the core CPI is slightly higher than the headline number is the exclusion of food and energy. While food prices were flat, energy saw a June drop of -1.6% (more on that later). Given the Fed's growing concern with low inflation, those numbers are lowering market expectations for further rate hikes. As a result, bond yields are falling as bond prices rise. Chart 1 shows the 10-Year Treasury Yield dropping in Friday trading. Stock prices are rising along with bonds. Utilities, which usually rise with bond prices, are one of the day's strongest sectors. Bank stocks, which suffer from falling yields, are the weakest. Foreign stocks are also rising, especially in emerging markets. The dollar is falling along with bond yields (more on that shortly). The combination of a weak dollar and falling rates is boosting gold along with most other commodities. 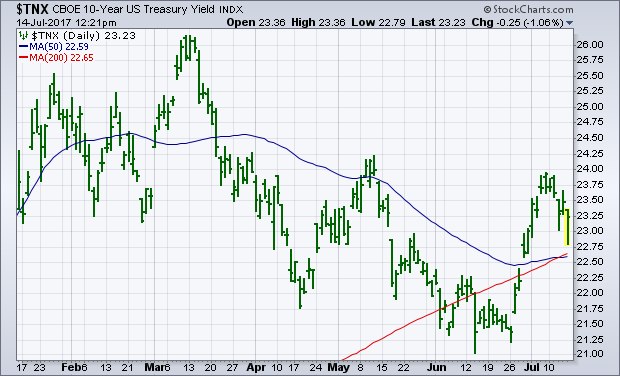 FALLING RATES ARE BOOSTING TECHNOLOGY STOCKS ... One of the lesser known intermarket relationships is the inverse link between bond yields and technology stocks' relative performance. That make some sense. Growth stocks like technology don't need a stronger economy to thrive. In fact, they do better in a slower economy which is usually associated with low interest rates. Value stocks (like banks) do better in a stronger economy with rising bond yields. Let's take a look. The black line in Chart 2 is a relative strength ratio which divides the Technology SPDR (XLK) by the S&P 500. The green line plots the 10-Year Treasury Note yield. The two lines have tended to travel in opposite directions over the last fifteen years. The upturns in bond yields in 2003 and 2013 resulted in tech underperformance (red arrows). [The Fed's taper tantrum during 2013 pushed bond yields sharply higher and hurt tech performance]. Downturns in yields during 2008 and again in 2014 boosted tech performance (black arrows), which continued into the second half of 2016. 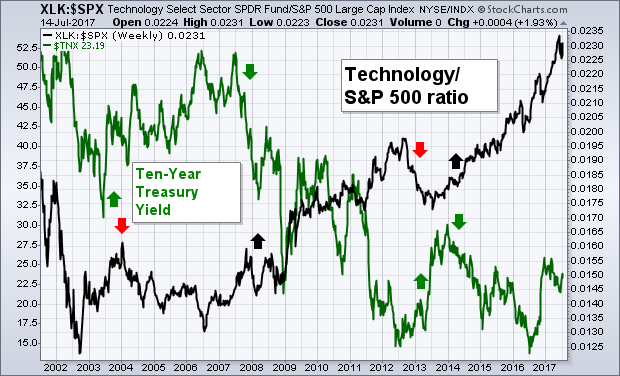