Ultimately, the U.S. stock market lives and dies by the performance of its economy and how that translates into earnings growth of U.S. companies.  Nearly every economic report that we've seen of late has been strong or strengthening.  The number of companies that are performing well on their top and bottom lines has been growing.  It's evidenced by the number of stocks that we currently have on our Candidate Tracker at EarningsBeats.com.  We have nearly 300 companies on this Candidate Tracker ChartList and it's by far the most we've ever had.  It tells us a few things.  But before I go into that, let's take a quick trip down memory lane.  Here are two charts of the S&P 500 since this bull market began.  The first is a chart of the first half of the bull market and the second highlights the action over the second half: 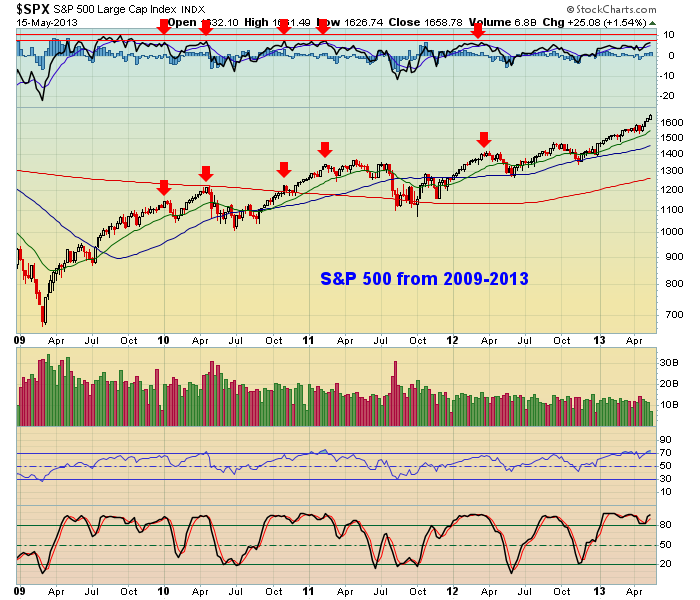 Despite the strength into the first half of 2013 and the overbought conditions, the S&P 500 rallied into 2015 before finally consolidating. 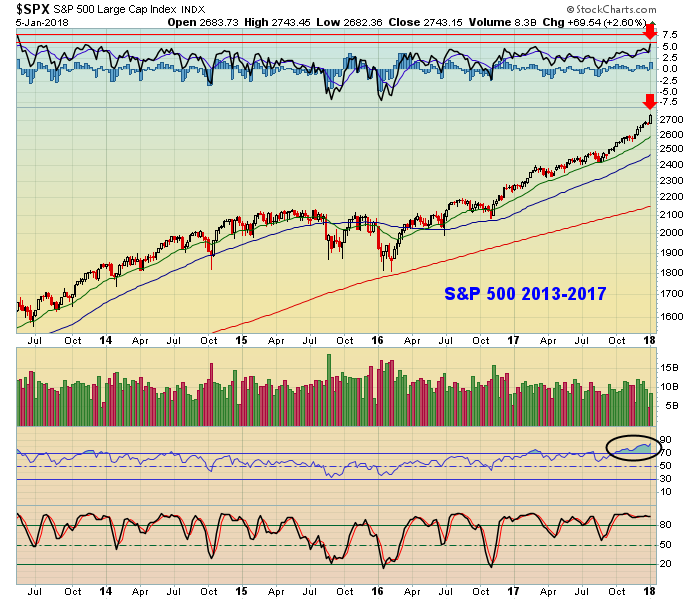 The PPO indicator at the top of each of the charts was set to 1,20,9.  So that line is telling you the percentage that price action is above its 20 week EMA.  Stretched levels can be indicative of the need for a pullback or a period of consolidation.  The red arrows highlight those stretched conditions.  While the PPO shows that the S&P 500 currently resides approximately 5.5% above its 20 week EMA, we've seen higher readings during this bull market.  Therefore, don't be shocked to see this advance continue longer, even though some selling would be healthier for the long-term.

So while it seems like selling into the current rally might feel better, I believe just the opposite.  The stock market will tell us when it's had enough.  From our record number of Candidate Tracker stocks, I just don't see a major top in the foreseeable future.  Consolidation?  Probably.  Test of 20 week EMA?  Maybe.  Here's what the large number of stocks on our Candidate Tracker tells me:

For those of you unfamiliar with our strategy at EarningsBeats.com, it's very simple.  Our tagline really says it all.  Better timing.  Better trades.  But we limit the number of stocks in our trading universe to the "best of the best".  What does that mean?  Well, it first means that we will not trade a company that doesn't meet our very specific Candidate Tracker criteria.  To make our final cut, a company MUST beat Wall Street's consensus estimates as to revenues and earnings.  That is step #1.  Step #2 - its price chart must also be top notch.  A company that beats estimates but is in a death spiral on its chart won't be considered.  We don't bottom fish, we momentum trade.  Big difference.  We would much rather own companies where management under promises and over delivers, rather than the other way around.  Don't you agree?  Finally, step #3.  We look for a certain level of liquidity.  We won't consider a stock that doesn't trade at least 200,000 shares a day on average.  Higher liquidity helps to prevent manipulation on stocks where just a few market makers might reside.  Once the ChartList is set, we exercise extreme patience and buy only at our price.

2. Technical price conditions are strong on a larger number of companies

This simply gets back to Step #2 above.  If the stock market is not performing well, not as many companies will have strong technical price action.  The fewer the number of strong charts, the more likely we're consolidating or beginning a possible bear market.  While we only consider being long during a bull market, our strategy shifts to shorting when companies under deliver and technical price action rolls over.  In other words, during a bear market, our Candidate Tracker would be filled with companies that have missed both revenue and EPS estimates and have bearish charts.  We would consider shorting those stocks as prices rose to test overhead price resistance.  But during a bull market, shorting strategies are simply a big waste of time and money - in our opinion.

3. More sectors are now participating in our strong economy

Just a few months ago, we had zero energy stocks on our Candidate Tracker.  And for good reason as that sector was not performing well.  That number is growing by the day now though as the energy sector has exploded higher the past few months.  This group is the poster child of why technical analysis works so well.  Price action is turning higher and we'll soon find out why when many energy companies beat top and bottom line estimates and raise guidance.  Inevitably, many of these stocks will pull back into key support zones or test rising moving averages, and when they do, we'll pounce on them.  Recently, we alerted our members to three separate energy stocks - NFX, DO and DVN.  All three became significant winners for us as strengthening fundamentals and technicals told us to begin scouring the energy space. The stock market tells us what areas of the market and which stocks to consider, we add them to our Candidate Tracker.....and then we simply wait for a solid reward to risk trade setup.  It's what works for us.

On Monday, January 8th at 4:30pm EST, Tom Bowley, Sr. Technical Analyst at StockCharts.com, will join me to host a 2018 Stock Market Forecast webinar.  I'll discuss more of our strategy at EarningsBeats.com and analyze several of our past winners and losers, highlighting the reasons for our entries and exits.  I'll also provide some of the stocks that really have my attention right now as I await pullbacks for entry.  Tom is planning to provide his forecast for 2018, including industries that could be the really big winners.  It should be a very informative webinar and we'd love for you to join us.  The webinar is FREE.  To register and to find out more information, CLICK HERE.