If there's one thing I've learned over my many years trading in the market, it's to avoid chasing a stock, especially if it's overbought. This might seem like an obvious strategy but many traders are drawn to those stocks that are ascending which I can understand. But if you end up buying near the top you might find yourself holding a position which has little prospect to rise further while your capital remains tied up.

As an example, take a look at the chart below on Meritor which soared after it reported strong earnings at the end of January. Someone bought that stock just above $29.50, perhaps with expectations that it would continue its march higher. Instead, that turned out to be the peak on the stock and since then it has pulled back a whopping 35%. Ouch. 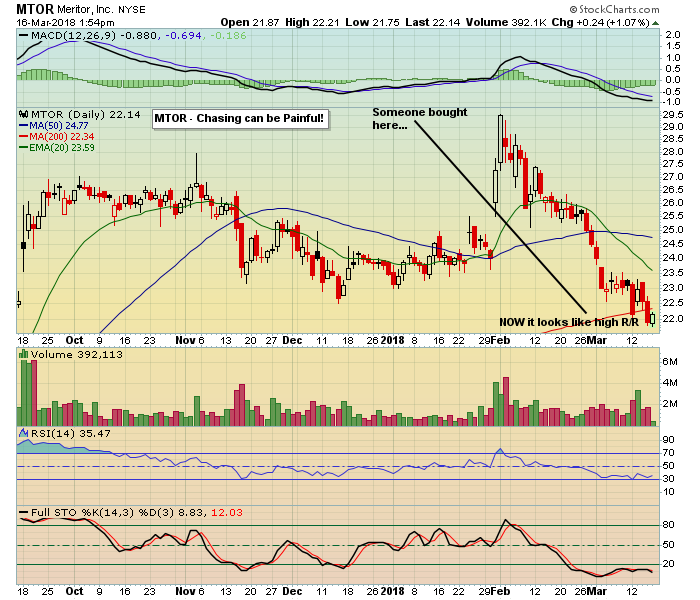 Of course there would have been no way of knowing if that was the top at the time. However, after the company reported earnings the stock climbed 25% in two days making it a poor decision to chase. And in fact, the stock pulled back almost 15% a week later.

There's no way of knowing how the trader who bought at the top handled things after that. If they had a tight stop in place then it might have just been chalked off as a bad trade. But if they continued to hold with expectations that it would turn around quickly then they may have burned through a lot of capital, and that capital could most likely have been put to better use.

I'm very familiar with this stock as it became a trade alert to members of EarningsBeats on March 1 when it looked like it might have bottomed. But guess what? It hadn't! But we had a very tight stop that resulted in a loss of just over 1% and since then the stock continued to move even lower. In fact it became a trade alert for a second time on Friday with an entry price of $22.11 with a price target of $23.65 and a stop of any Intra Day move below $21.75, the day's low. So if the trade goes against us it would represent a loss of roughly 1.5%, but if it works out the way we think it could, a gain of 7%, so almost a 5 to 1 reward to risk.

I'm pointing out our trading strategy on MTOR to show that we're going to have losing trades. But when we do we're going to contain the losses, one of the most important elements of a trading strategy. Otherwise you could find yourself on the always painful side of a double digit loss while missing out on other, better opportunities.

One thing I would like to mention is I will be conducting our Quarterly Earnings Webinar on Monday, April 9. I will be joined by StockCharts.com's Tom Bowley. During this event we will be discussing the upcoming earnings quarter, how to strategically position yourself to take advantage of stocks that report strong earnings and the importance of maintaining "defensible stops." You can mark your calendar and I will have more details in my next ChartWatcher's article. In the meantime, go out of your way to NOT chase stocks that have already made big moves, don't let losses get out of hand and stay disciplined at all times.