Most analysts would agree that overall, 2017 Q4 earnings were superb. For quite a while we saw one company after another beat earnings expectations and they were rewarded for those results as well. But recently, as the market has come under fire, responses to many earnings reports have been brutal.

For example, last week MNST, BOX and JCP got slammed after disappointing the street. And WTW reported as well with a nice after hours pop only to get hammered after the numbers sunk in.

I bring this up since I know there are traders who are willing to hold positions into earnings reports; there's nothing like a big beat and subsequent rise in the stock to help boost the portfolio. On the flip side, if you happen to be holding a stock that misses its numbers, it can be beyond painful.

For a great example, take a look at the chart below on BOX. Just prior to releasing its numbers on last Wednesday, the stock was looking great! In fact, one would have guessed the response to their earnings would be positive given the behavior of the stock. But guess what? That would have been a bad guess. 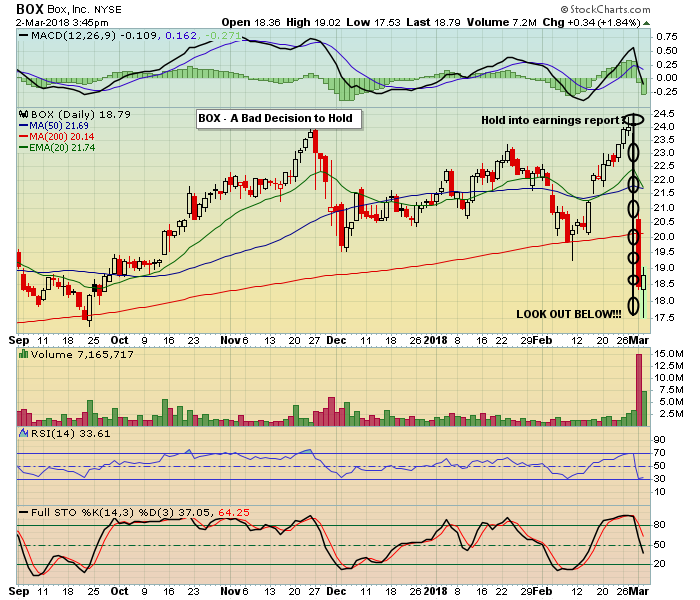 As you can see, the stock went from a high on February 28 of $24.50 to a low of $17.53 on Friday which resulted in a loss of over 28%. So imagine if you were holding the stock into its earnings report; would you have been prepared to lose almost 30% over the course of a day or two? I think that would have been hard to stomach.

It's why we suggest to members of EarningsBeats to sit on the sidelines when a company reports its earnings, watch the market response and then get involved in those stocks that had strong earnings and pulled back to key support. For example, look at the chart below on INVA. This company reported solid earnings, move higher on strong volume and then pulled back to key support near its 20 day moving average. That was when we issued a trade alert to members with an entry price of $15.51, a price target of $17 and a stop of any Intra Day move below $15.07. That presented a 4 to 1 reward to risk ratio which made it an attractive candidate. 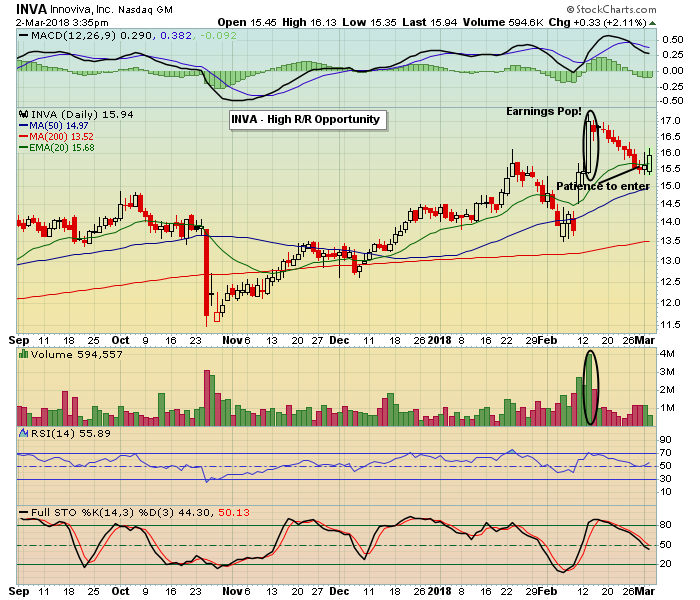 The point is there's no need to put your capital in harms way ahead of an earnings report. Instead, watch to see which stocks beat earnings expectations, wait to see how the market reacts and then put on your patience cap and wait for a high reward to risk trading opportunity.