There are plenty of reasons why we should be cautious given the current market environment, but I'm not in the camp that believes we've entered a bear market.  It's simply too early to make that call, in my opinion.  Most corrections and bear markets begin similarly, with expanding volatility and fear, short-term price breakdowns and rotation from aggressive areas of the market to more defensive areas.  As I look back at the past month, check, check and check.

The January 2018 top and subsequent breakout look very similar to the what we saw back in Q3 2014.  Here's a chart to show the similarities in terms of price action: 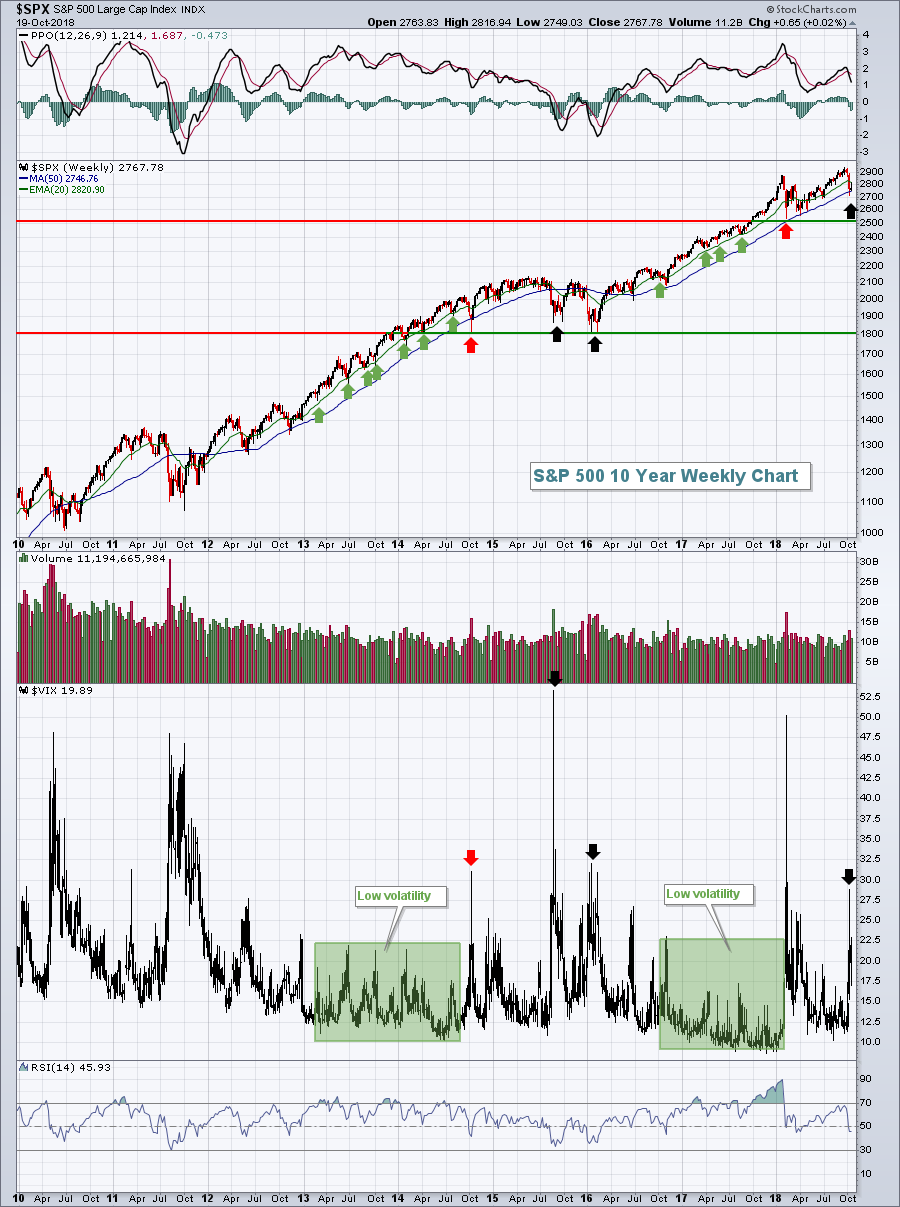 The green arrows in 2013 and 2014 highlighted a rising 20 week EMA that provided great support and the green shaded area on the Volatility Index ($VIX) shows that there was little fear throughout this uptrend.  In October 2014, price action moved swiftly beneath the 50 week SMA and a surge in the VIX above 30 marked a very significant price bottom (red arrows).  After the market rallied and higher highs printed, we saw more market weakness with rising VIX levels and retracements toward earlier price support (black arrows).

I am definitely short-term cautious.  It makes a lot of sense to allow the market time to settle down.  The VIX is currently near 20 and elevated VIX readings (those above 15-16) can lead to very swift, impulsive selling.  Furthermore, next week is the worst historical period of the year.  Since 1950, the S&P 500 has produced annualized returns of -41.24% from October 22nd through October 27th.  That spans all of next week.  The 2532 low in February is very significant because buyers finally showed up at that level after panicked selling.  It also was retested two months later and held.

But here's the real problem I have with this being the start of a bear market.  Aggressive sectors have been rising on a relative basis all year.  Check out this chart:

Wall Street normally sees bear markets coming before they're here.  We typically see plenty of rotation to defensive areas as we're making the final highs.  Over the past quarter, we've seen significant outperformance by technology, consumer discretionary and the newly-created communication services.  That generally does not precede a bear market.

So I'll simply remain cautiously bullish for now.  I do believe there's a better than 50-50 chance we're heading back to those February 2018 lows and that could be a scary ride similar to what the stock market experienced in late-2015 and early-2016.

On Monday, October 22nd at 4:30pm EST, I'll join John Hopkins, President of EarningsBeats.com for an educational webinar discussing recent market action and my trading strategy during such a volatile trading environment.  The event is for EarningsBeats.com members, but they are offering a one week FREE trial that'll get you a seat.  To sign up, CLICK HERE.  All EB.com members will receive the latest Strong Earnings ChartList (companies that topped Wall Street estimates as to both revenues and earnings and whose chart looks bullish) at no additional cost, assuming you're also a StockCharts.com member.