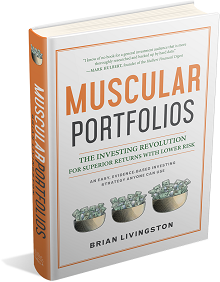 To kick off the new month, I'm thrilled to announce another all-star addition to our StockCharts commentary team. Brian Livingston, author of the recently-released book Muscular Portfolios, will be sharing his investing insights and money management wisdom through a new weekly blog, Muscular Investing.

Brian's background is quite unique, and his unconventional path to the investing world is a fascinating one. Before turning his attention to the markets, he was a successful dot-com entrepreneur and an award-winning business and financial journalist. From 1984 through 1991, he served as the assistant information technology manager of UBS Securities in New York City, a computer consultant for Morgan Guaranty Trust Co. (now JPMorgan Chase) and technology adviser to Lazard Freres. As a consumer advocate exposing the dark side of high tech, he wrote more than 1,000 articles from 1991 through 2010 for such publications as PC World, CNET, InfoWorld, PC Mag and eWeek.  He co-authored 11 books in the Windows Secrets series (1991–2007) with over 2.5 million copies sold. In conjunction with the book series, he also founded the Windows Secrets Newsletter in 2003.

After more than two decades focusing on information technology, Brian turned his attention to the investment industry. He is now the CEO of MuscularPortfolios.com and has recently authored the book Muscular Portfolios: The Investing Revolution for Superior Returns with Lower Risk. Additionally, he serves as president of the Puget Sound regional chapter of the American Association of Individual Investors (AAII).

As both Brian and StockCharts are based in the Seattle area, I've known him and followed his work for some time now. What I've always appreciated about Brian is his data-driven, yet also very understandable approach to investing and personal finance. I've seen firsthand the amount of research and hard work that went into his new book, and it blew me away to get my hands on a pre-release copy this past summer. The attention to detail that Brian brings to his work is immediately clear to anyone who reads it. I can't wait to see him bring that same quality of content to his new work at StockCharts.