Today, we had a new Intermediate-Term Trend Model (ITTM) BUY signal trigger on the Dow Industrials ($INDU). Additionally, the SPY (which is not on the Scoreboards) triggered a new ITTM BUY signal as well. Be sure to read Carl's DP Weekly Wrap for this week to read about that signal change in more detail. The other three large-cap Scoreboards will add similar signals next week unless price falls below the 50-EMAs. 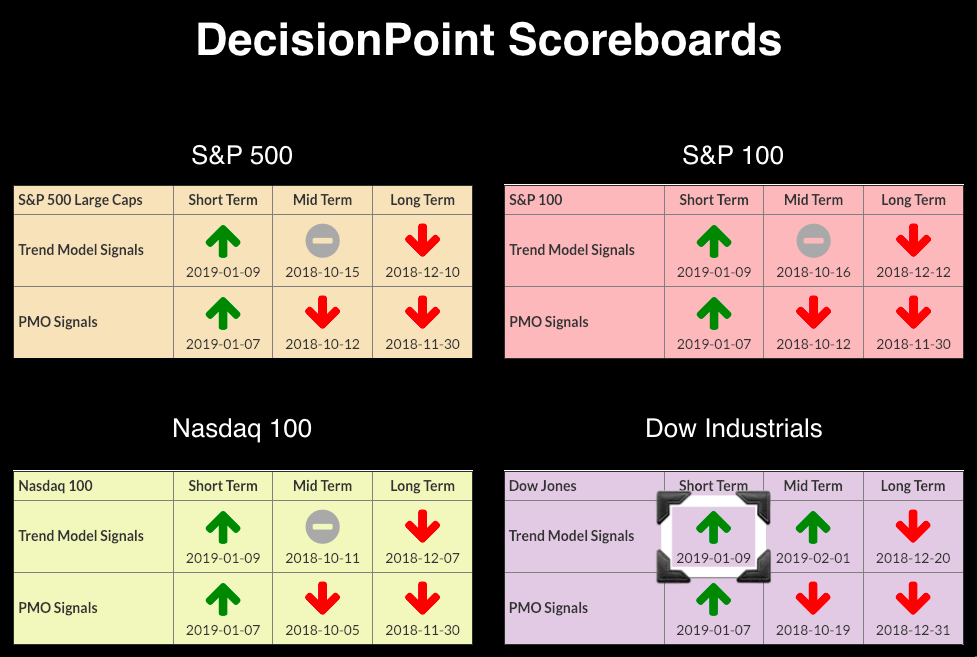 Not only are we seeing several ITTM BUY signals appearing or nearly arriving, but the bearish ascending wedges have morphed into rising trend channels, which is certainly bullish. I've annotated on some of the charts below, using thick red lines to depict the previous rising wedges. While these are bullish indications, I would use caution; the PMO is overbought for a bear market configuration and the rising trend channels are all fairly steep in their ascent. That type of rising trend is difficult to maintain. On the Dow below, the declining tops trend line is holding up as overhead resistance. 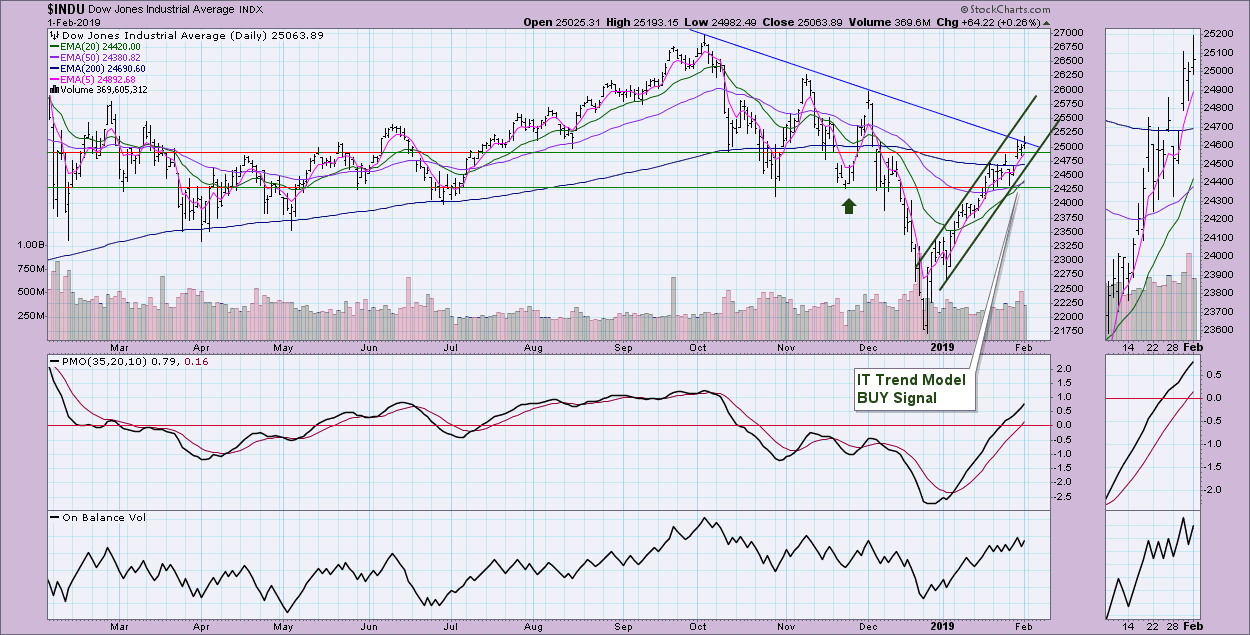 The SPX missed an ITTM BUY signal by only two-tenths of a point. The only way for this signal to not trigger next week is if price falls below the 50-EMA, which is highly unlikely. The OBV is showing a reverse divergence (something that is on all four charts). We saw a pick-up in volume, putting the OBV tops at the same level. However, price did not follow suit, unable to push to similar tops despite good volume. 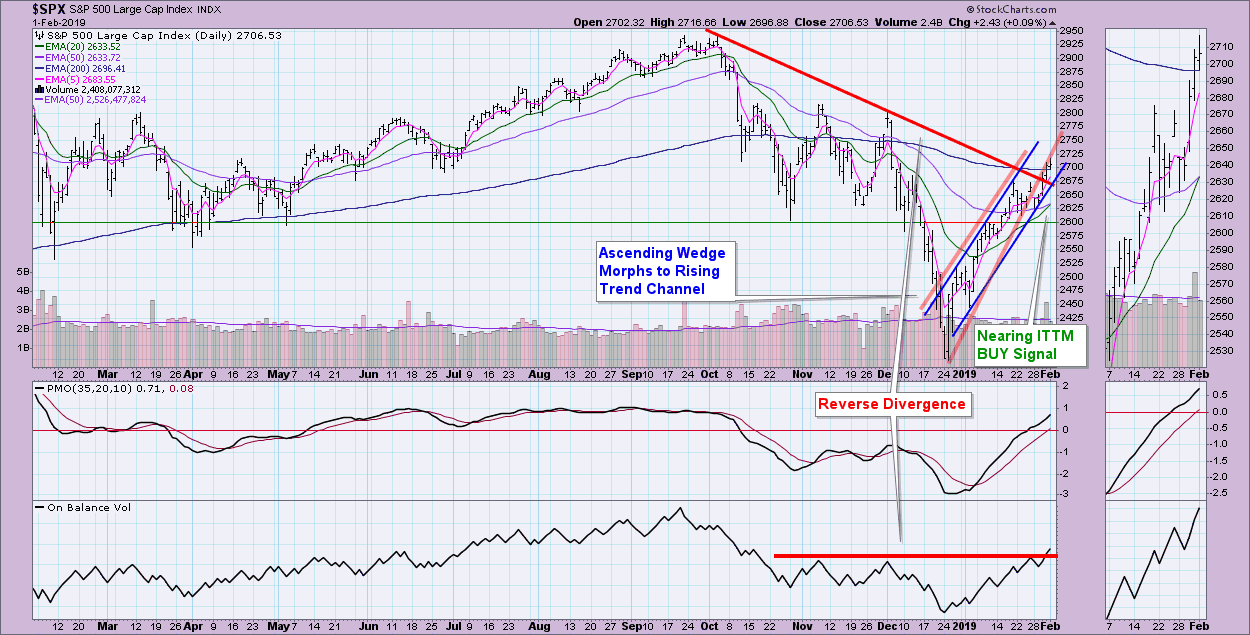 Another rising trend channel is on the NDX. The NDX looks pretty healthy in that we saw a breakout above the declining tops line in mid-January. The resistance level that price pushed through on Thursday links to the mid-January top, mid-December top and mid-October bottom, as well as the 200-EMA. Like the other Scoreboard indexes, the PMO can be considered overbought. 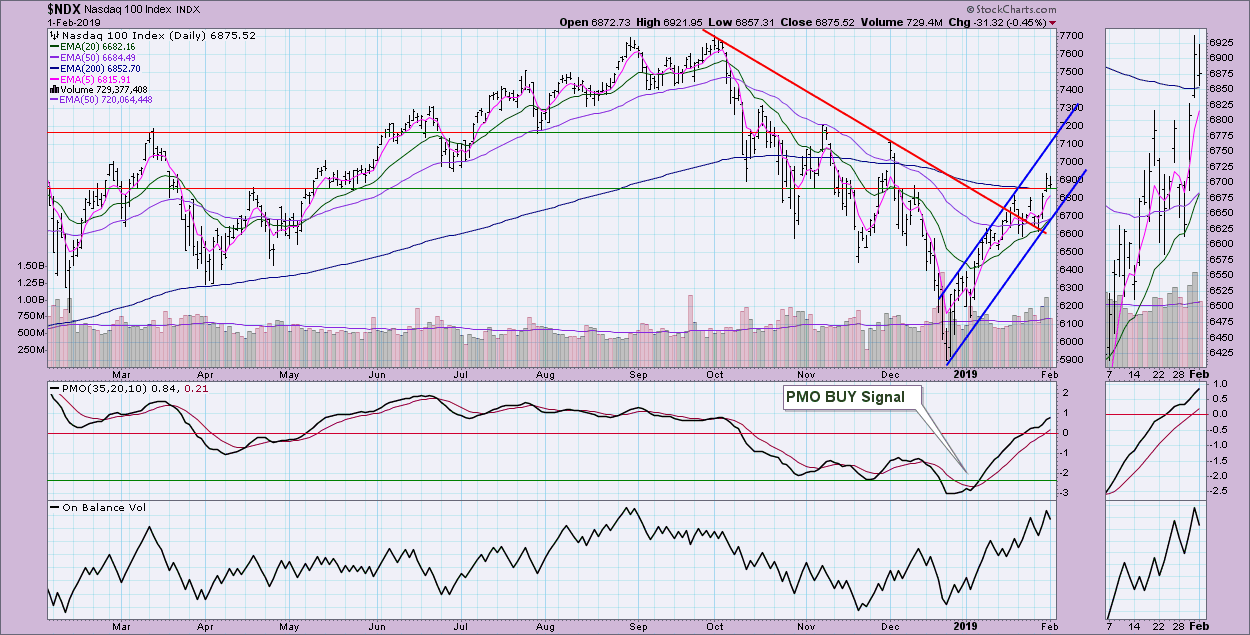 OEX barely broke above the declining tops trend line and is now hung up with the resistance of the 200-EMA. The PMO isn't as overbought as some of the others, but it's getting there. A new ITTM BUY signal is approaching (though it is not as close as the other three indexes) as the 20-EMA reaches toward the 50-EMA for a crossover. OBV tops are similar, having risen to the same level. Unfortunately, price tops did not follow suit. 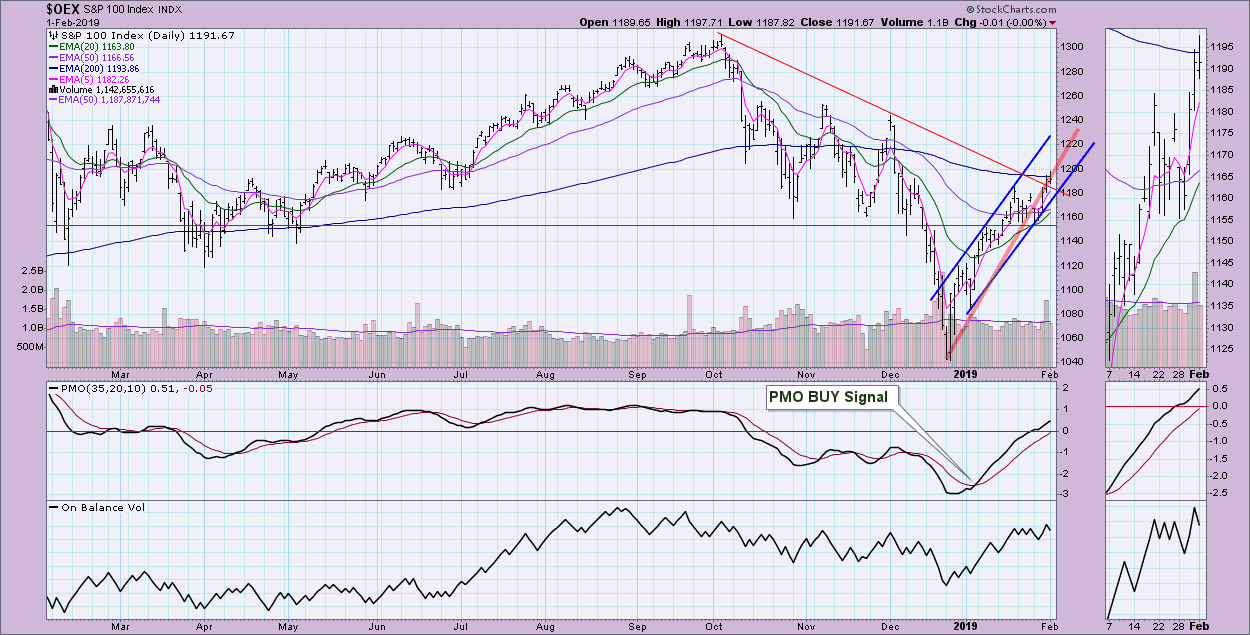 Conclusion: Carl's Weekly Wrap is a must-read this week. During Friday's DecisionPoint show, I asked Carl if the new BUY signals are coming in on not only the DP Scoreboard indexes, but also on our Sector Scoreboard this week. There were 5 new BUY signals in the following sectors: XLC, XLF, XLB, XLI and XLB. This adds to the three ITTM BUY signals we had on XLRE and XLY. It's hard to deny that we could be looking at a buying initiation, which would lead to higher prices. There's also evidence from the OBV and VIX that there is a buying exhaustion lining up. Carl and I favor the exhaustion.