We’re in a difficult period with the markets at the moment, as uncertainty surrounding U.S.- China trade talks is weighing heavily on stocks. With both sides throwing barbs and a resumption of talks not due until later this month, the pressure on the markets may very likely continue.

With daily reactions to the latest trade-related headlines, there’s been an increased risk in equities, which, in turn, is pushing Interest rates down as investors seek the relative safety of U.S. Treasuries. In fact, yields are now down to levels not seen in over a year.

Income investors, as well as those looking to buffer their portfolios from any sharp gyrations in the U.S. Equity markets, may want to consider these four technically sound stocks, which can act to buffer you against continued volatility while providing growth prospects that should keep them attractive in the long run.

The first stock is in the Utility sector, which is hitting a new high in price. In addition to offering an attractive yield, Utility stocks don’t have exposure to China, which is another reason we’re seeing money flows into these defensive stocks.

Entergy (ETR) is a utility that delivers electricity to almost 3 million customers in the Louisiana/Texas area. The company made a strategic shift 5 years ago to enter the more regulated area of its industry; that move is now paying off with a bounce back to profitability in 2017, which has continued to expand since then. Given its growth prospects, this 3.7% yielder was touted as one of the few relative bargains among Electric Utilities by a major forecaster at this month’s Money Show.

As you can see in the chart below, the stock is in a confirmed uptrend, finding support at its upward-trending 10-day simple moving average following a breakout on a 2-month base. A quick look at the money flow characteristics tells us that this stock is poised for further outperformance. 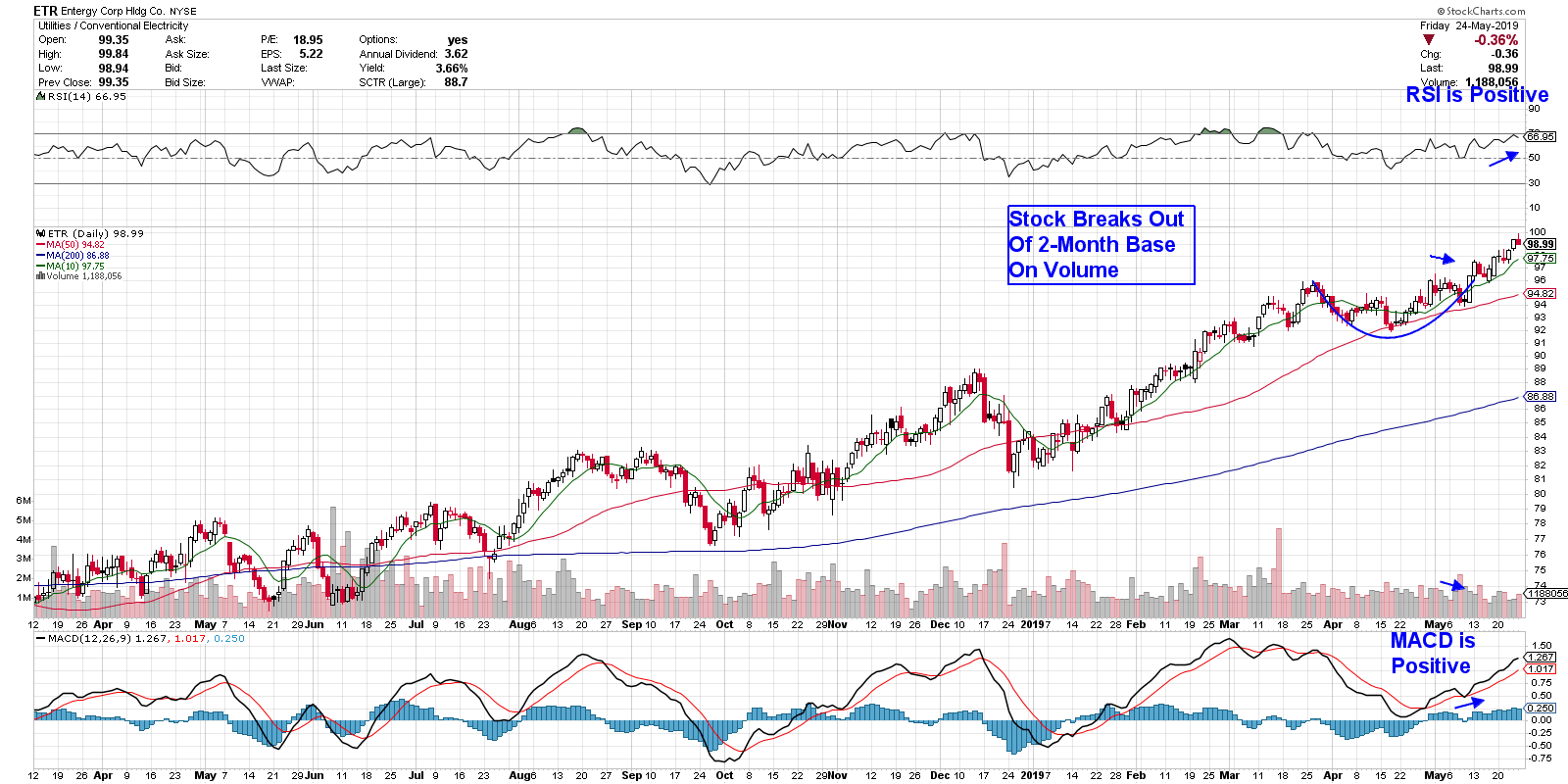 Our next stock is in the Consumer Staples. In addition to being in a defensive sector, this high yielder bought out a company that’s in an explosive growth area of the food industry, which should continue to help them grow.

That stock is General Mills (GIS). Although most investors may think that this 100-year old company is washed up, you may want to look closer. The company has been selling off some of their older, non-performing brands while simultaneously acquiring companies with new brands that appeal to evolving consumer tastes. One such company is Blue Buffalo, which produces and distributes premium food for dogs. The pet product industry is a $30 billion per year space and GIS is expected to participate heavily.

As you can see in the chart below, the stock hit a new high in price this week following positive remarks from a Wall Street analyst. This bullish move followed last week’s break out of a 1-month base. In addition, this 3.8% yielder remains in an uptrend as the stock continues to find support at its upward-trending 10-day moving average. 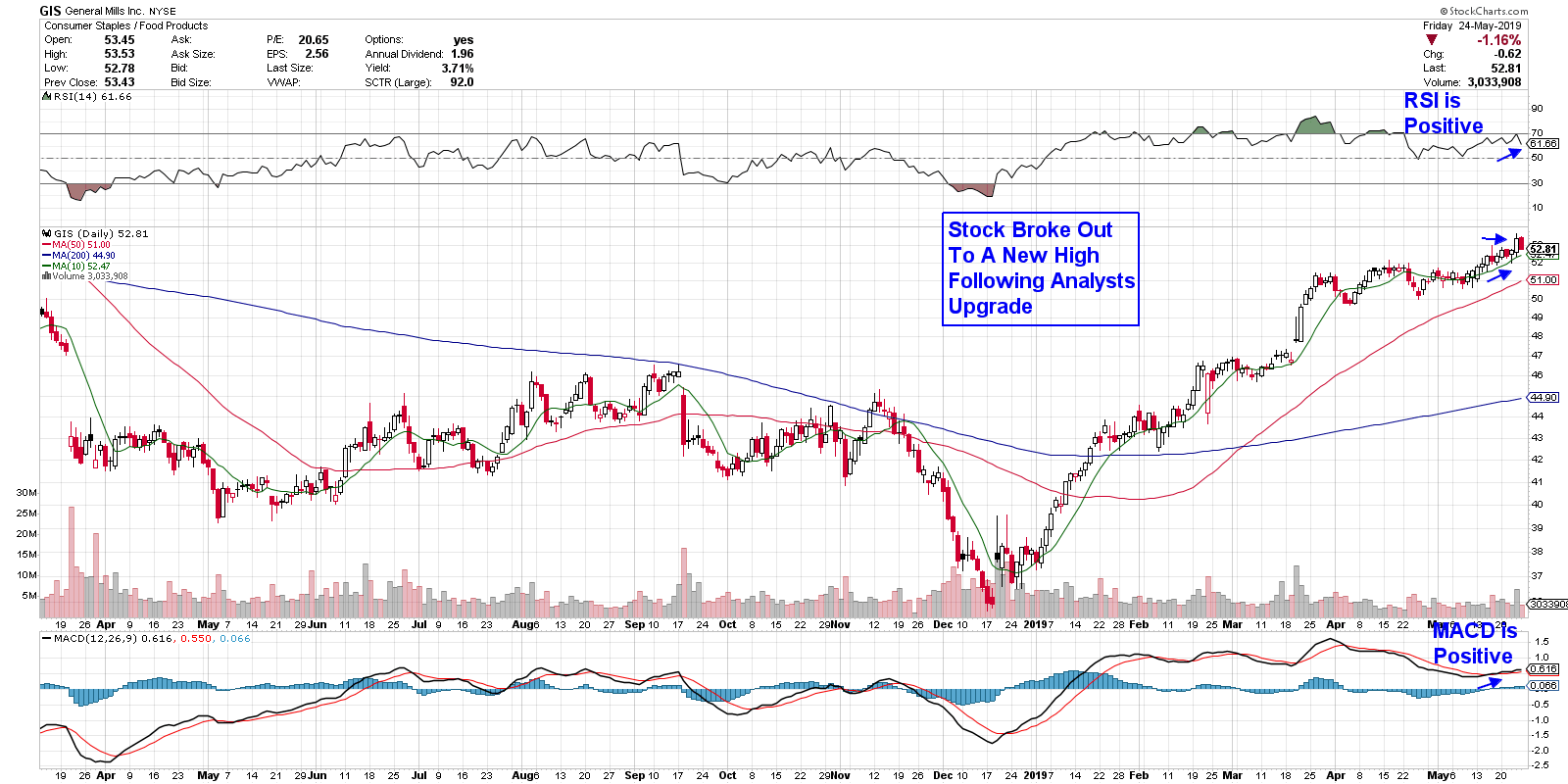 Next, we’ll turn our focus on a Real Estate related play, which is benefitting from an expanding economy as well as lower interest rates. The company we’re highlighting is one of the few truly diversified REIT (Real Estate Investment Trust) stocks, with properties spread across office, retail and industrial segments, as well as overseas properties.

The company is W.P. Carey (WPC) and this fast grower has managed to increase their annual dividend every year for 22 years running. Additionally, the company’s 5.2% yield is higher than most of its peers.

Currently, the stock is a bit extended following last week’s explosive move to a new high in price. As you can see on the chart below, a pullback to the 10- or 50-day moving average has historically presented itself as an ideal buying opportunity. 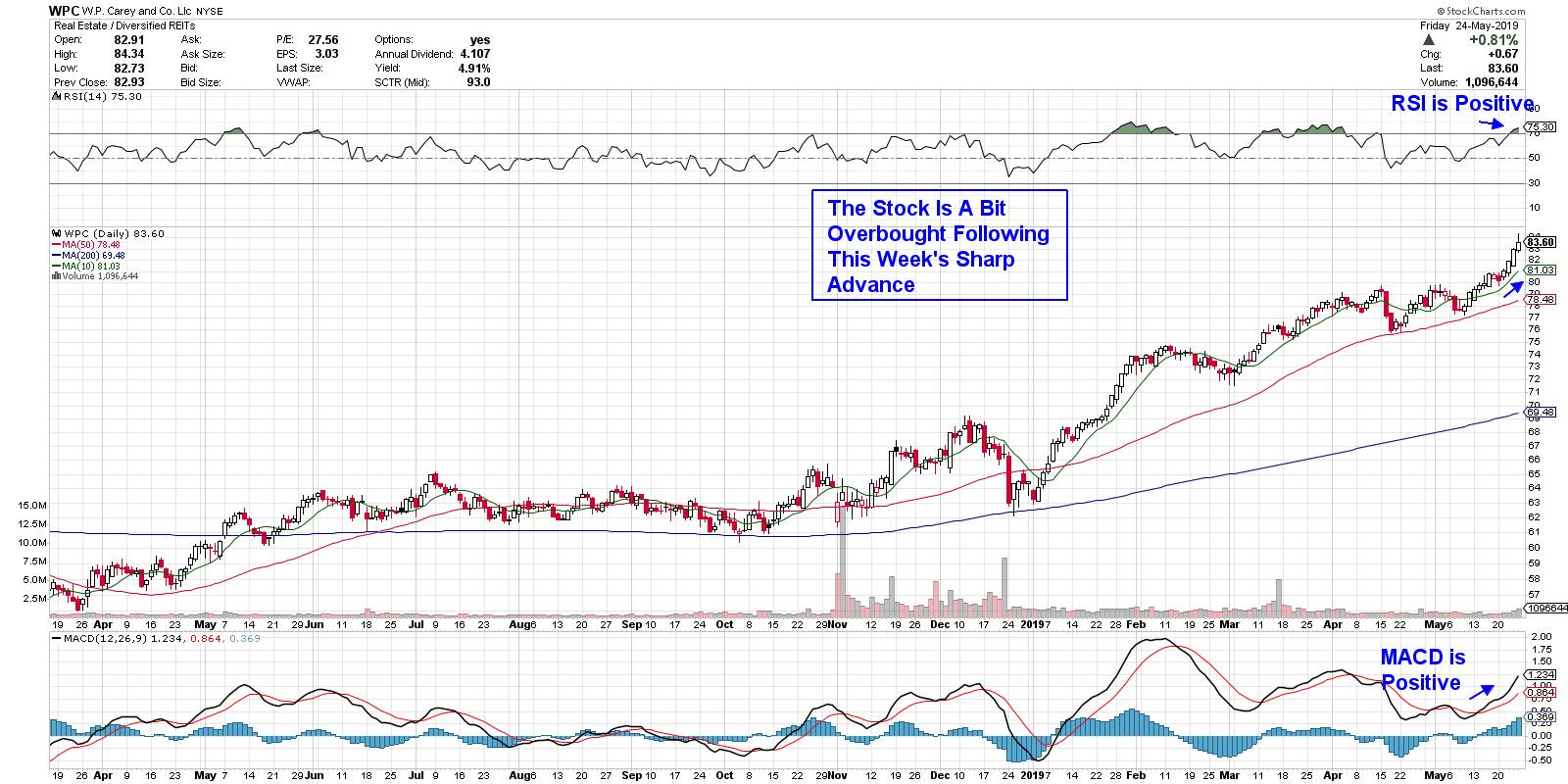 Lastly, I’ve highlighted an asset management firm that is reversing their recent downtrend with positive performance results, coupled with recent announcements that has analysts raising their guidance.

Ozh-Ziff Capital Management (OZM) is one of the largest alternative asset managers in the world, with over $32 Billion under management. Their main fund is consistently cited for outperformance relative to its peers, as it seeks investment opportunities in all asset classes and throughout the world. Of note is the company's late-December release of strategic policies that will restructure the company to create more visibility for shareholders.

The stock is currently in the throes of reversing a 5-year downtrend, as their new initiatives as well as favorable global market conditions begin to positively impact the company.

The daily chart below shows that the stock is in a clear uptrend as it continues to find support at its upward-trending 10-day simple moving average. In addition, both the RSI and MACD are positive. While the stock currently looks attractive, it’s important to note that it’s had an explosive run-up in May and, with a 29% gain for the month, we'd wait for a pullback before entering the stock. I would suggest buying on a pullback, as this 7.9% yielder appears poised for further outperformance. 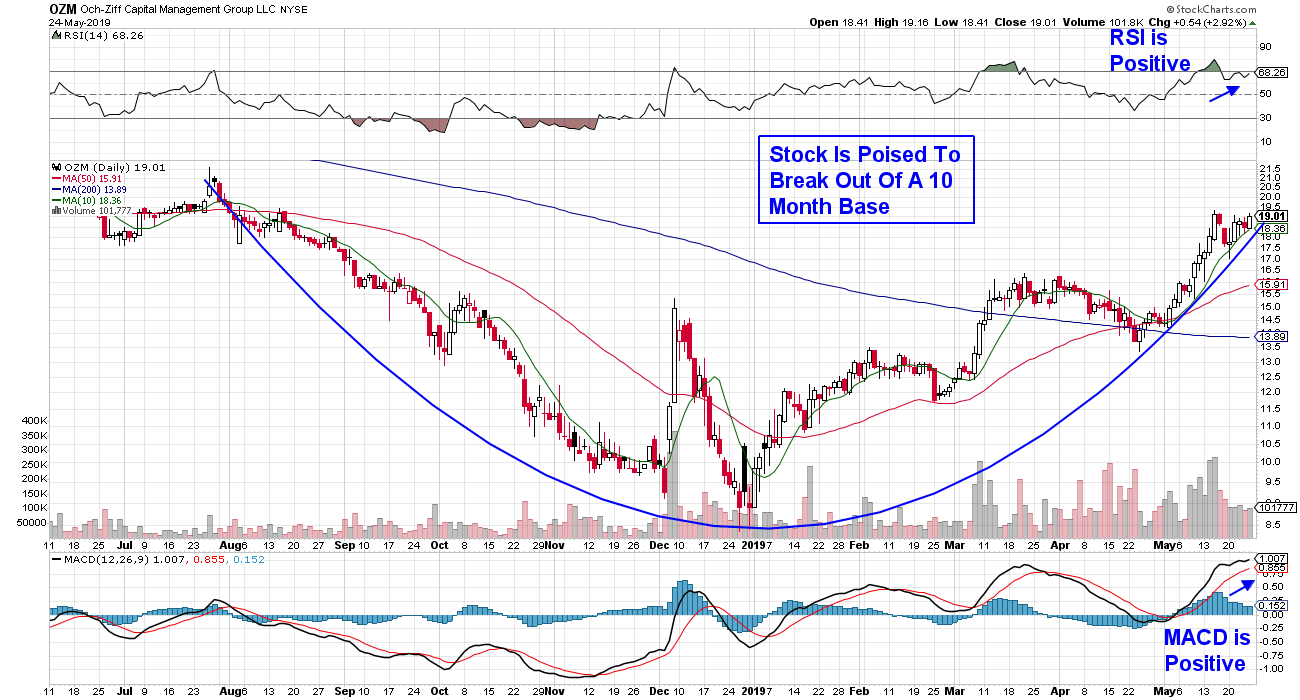 While my first three picks highlighted stocks that are in defensive areas of the market, which may outperform more during uncertain periods of the market, each of these companies has a growth prospect that should keep them attractive even after the market pressures lift.

Subscribers to my bi-weekly MEM Edge Report were alerted to these stocks a while ago. If you'd like a trial of this report, email me using the link below.