While the overall market was working its way to new highs, the entire investing world (and many who had never been involved in the market before) was tuning in daily to see what the price of Gamestop (GME) was. A stock that was trading at just over $19 a share on January 12 doubled overnight to $38. That, in and of itself, was worthy of a headline. But it didn't stop there. Just over a week later, the stock had doubled again to just under $77 per share. By then, things were just starting to heat up. In fact, when the weekend was over and Monday came around, it doubled again, getting as high as $159 before coming back down to earth and closing near $76.

Now it's "Game Over", right? Nope. By the next day, the stock had risen to $414 per share. Finally, a week later, the stock had simply run out of gas, pulling back to the $60 range - but still a triple over a very short period of time. 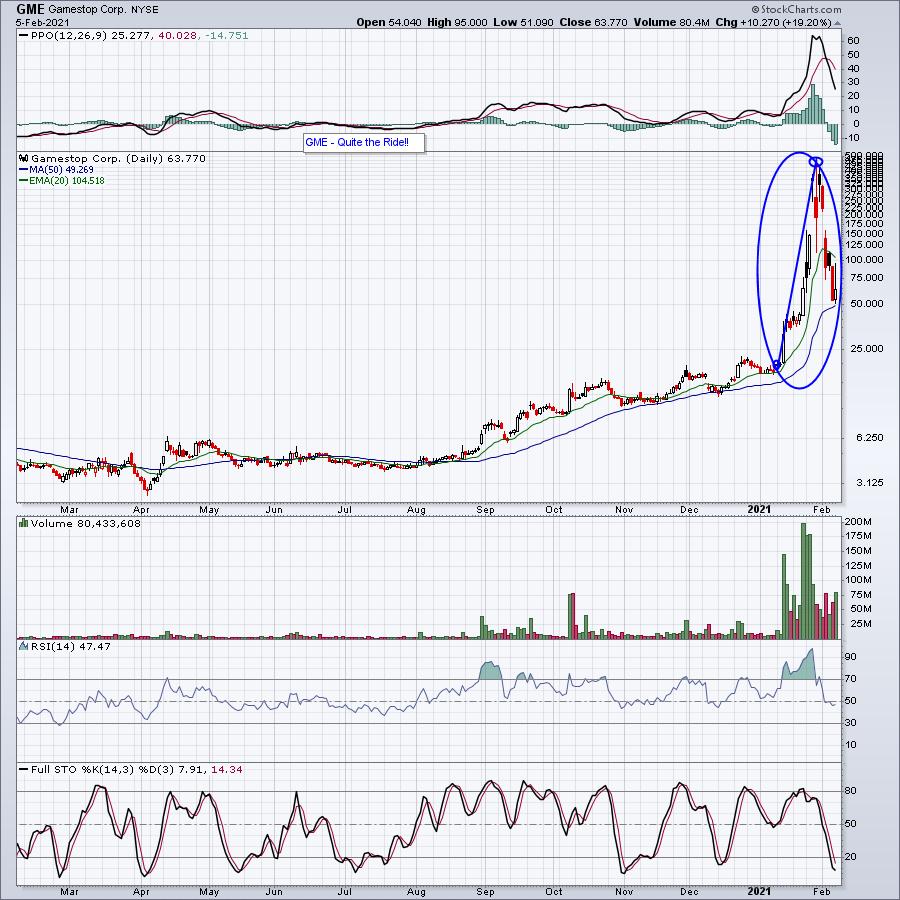 Of course, anyone who has been investing/trading in the market long enough knew that this wild, awe-inspiring ride would come to an end. Or has it? What's to say GME won't rise again after coming back down to earth? No one really knows. And what stock might be next - to the upside or downside - if Herd Mentality and Social Media continue to play an outsized role on the success or failure of a company? What I do know is the meteoric rise in GME caused substantial pain to some very sophisticated Hedge Funds. Chalk one up to the little guy/gal. And it's likely to happen again.

The good news is that the off-the-charts volatility we've seen in stocks like GME and other heavily-shorted stocks is not likely to have the kind of negative impact on the overall market that many pundits have forecasted. How do I know this? Take a look at the record highs in the S&P and NASDAQ, which shows investors have shrugged it off.

However, there's always going to be great opportunities if you know how to spot them. For example, well before "short squeeze fever" kicked in, our Chief Market Strategist Tom Bowley had already provided our members with a "Short Squeeze ChartList" that included those stocks with a short float of at least 20%. And from that list, he narrowed it down further to 10 "hot stocks" he felt were primed to move higher, which included GME. And of those 10 stocks, the "worst" performer (based on the lowest price of a stock from the date added to the list to its high through this Friday) was 9.4%, with three of the stocks rising by over 100% and the Granddaddy of them all - GME - up a whopping 2400%. You can see the entire list and learn more about our biggest event of the year, where Tom will unveil his Top 10 Stock Picks in our 4 portfolios, 40 stocks in all, by clicking here.

Also, you can sign up for our FREE EarningsBeats Digest that comes out every M, W and F with market insights and expert analysis by our own Tom Bowley. Get started by clicking here.

Fundamental and technical analysis will continue to play a vital role in determining the value and possible direction of a company's stock price. But we should no longer be surprised when we see a situation like we did with GME pop up again. Just make sure you are on the right side of any trade involving a stock like GME or it could become devastatingly painful.