A number of winning stocks that performed well last year and into the first quarter of this year have seen dramatic drops in price. A decline in high-multiple growth stocks amid increasing interest rates was one reason, while a shift away from lockdown stocks caused other areas to drop.

I'm on the lookout for turnarounds in these areas simply because when a stock reverses a downtrend, the potential upside can be very rewarding. I was tuned onto this years ago while working with a top-performing fund manager, who used a screen I helped develop called "hockey stick." The hockey stick screen would search for stocks that were at least 20% below a fairly recent peak in price. From there, the stock would need to break back above its key moving averages on volume to signal the beginning stages of a potential reversal of its downtrend. 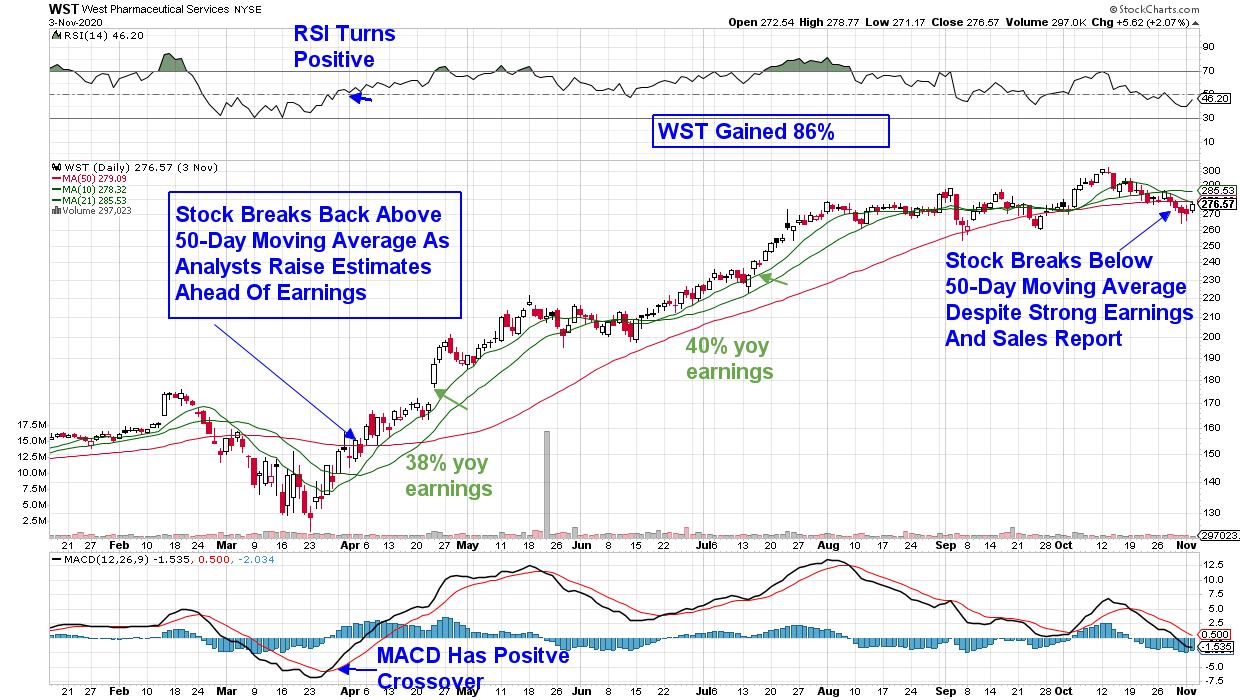 Above is West Pharmaceutical (WST) - a stock I added to my MEM Edge Report last year after screening with my updated hockey stick screen. The new version has additional characteristics, such as positive RSI and MACD signals. Last April, WST broke back above each of its key moving averages on volume after a 3-week pullback.

As you can see highlighted above, the MACD also posted a positive signal, with the black line crossing above the red, while the RSI above simultaneously moved above the 50 level and into positive territory. WST went on to gain 85% before it was removed from my MEM Edge Suggested Holdings List after breaking below its key 50-day moving average on volume.

Let's take a look at two stocks that are beginning to show signs of reversing recent downtrends, but are not quite in a buy zone. 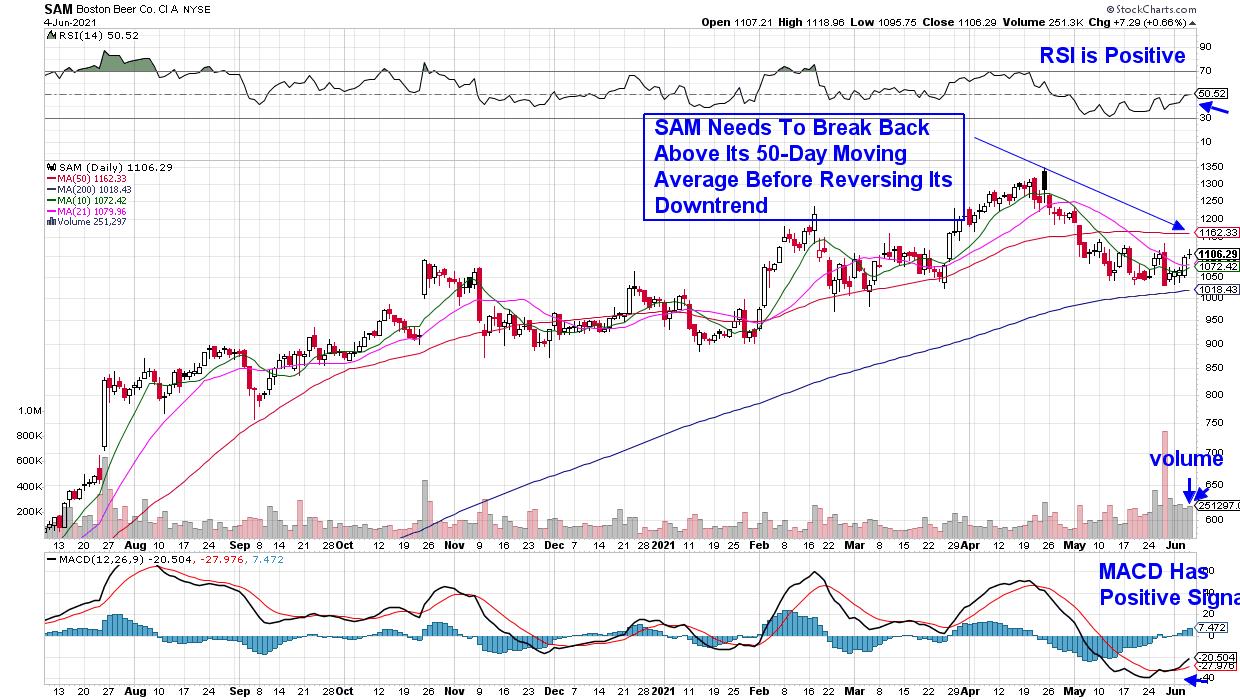 First up is Boston Beer Company (SAM), which peaked in price 6 weeks ago after posting quarterly earnings that were 246% above estimates. The company has seen great success with their hard seltzer product, which has been particularly popular among locked-down imbibers who were stuck at home.

SAM broke back above both its 10- and 21-day moving averages on news last month that they've set up a research lab in Canada to explore moving into cannabis beverages. While encouraging, the stock still has work to do before reversing its recent downtrend.

In particular, a break of SAM back above its 50-day moving average would be very constructive coupled with a positive RSI and MACD. The high volume last week indicates that we may be on our way to seeing these bullish signals very soon. 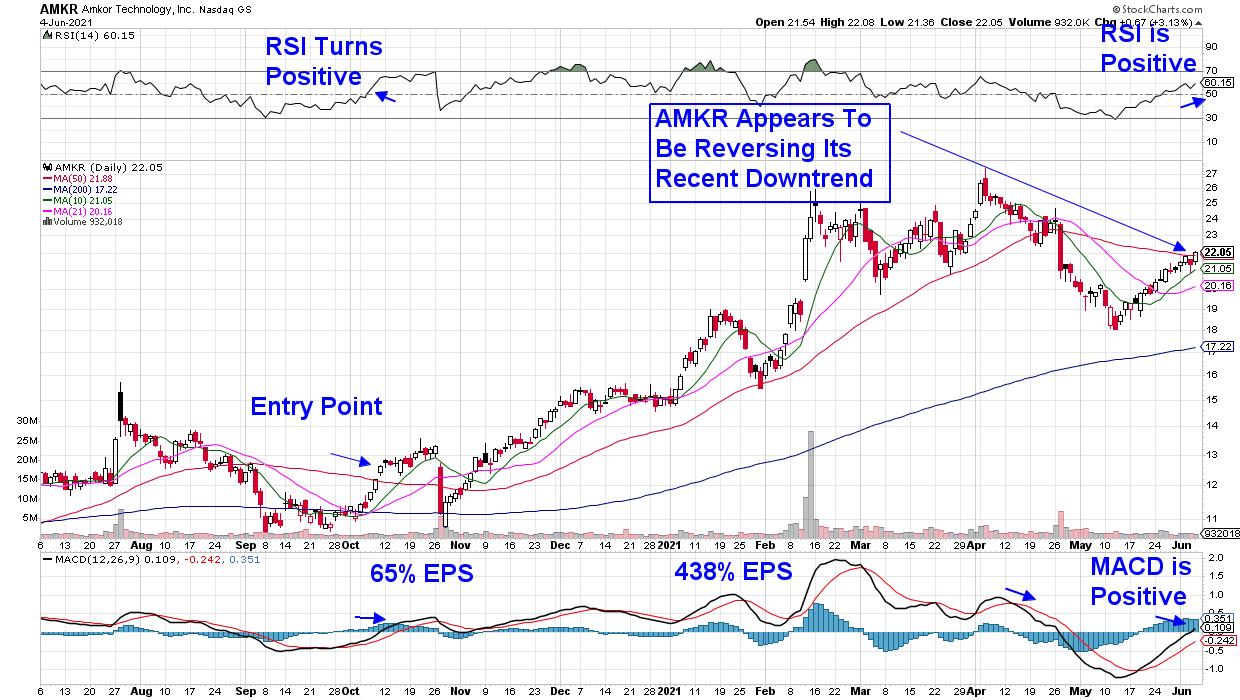 Next up is Small Cap Semiconductor stock Amkor Technology (AMKR). This stock first hit my hockey stick screen last fall, where I picked some up for my personal account after its break back above its 50-day simple moving average on volume following a sharp pullback. The stock went on to gain 85% before I sold it in April.

AMKR made the list again today following its break back above its 50-day moving average, after falling from an early April peak in price. Semiconductor stocks turned bullish 2 weeks ago as increased chip demand amid a shortage is improving the growth prospects for these stocks.

Amkor Tech is one of the largest providers of semiconductor packaging and test services with exposure to the smartphone and automotive spaces. The stock is not primed for further upside just yet as I'm on the lookout for high volume as the stock advances a bit higher.

While the move back into these formerly leading stocks is compelling, I'd keep new positions lighter than usual given the fact that the near-term outlook for inflation remains mixed. Higher-growth stocks, such as those highlighted above, tend to underperform under inflationary periods, as their future earnings will have a reduced value.

At this time, I'm keeping stocks on my MEM Edge Report diversified among cyclical areas, such as Energy, Industrials and Financials, that have strong growth prospects, while also highlighting select Technology stocks that are in confirmed uptrends. If you'd like access to this list of stocks as well as industry group and sector insights not found elsewhere, trial my bi-weekly MEM Edge Report for 4-weeks using this link here. You'll also receive Alert Reports throughout the week that point out sector rotation and stocks poised to benefit.

In the latest episode of my StockCharts TV series The MEM Edge, I reveal an area of the market that's benefiting from a shift in government spending. In addition, I also examine how to identify uptrends vs. downtrends in well-known stocks.