For a very long time, I have avoided holding stocks that I own into an earnings report. I should explain that I am more of a short-term trader, so I don't like the risk that goes along with holding a stock when they are about to report. And that goes for both the long and short side.

The primary reason I opt to wait until numbers are reported is that I have no way of knowing how the market will react once earnings are released. For example, a company could beat both top- and bottom-line results, guide higher and still move lower. Or a company might miss all expectations and still move higher. It's a crapshoot at best.

So what I like to do is look at a chart on a company that is about to report its earnings - say, after the bell - and identify key support and resistance numbers while allowing for an exaggerated response higher or lower. I then make my move once I assess what is going on. As an example, take a look at the chart below on Docusign (DOCU), which reported its earnings after the bell this past Thursday. 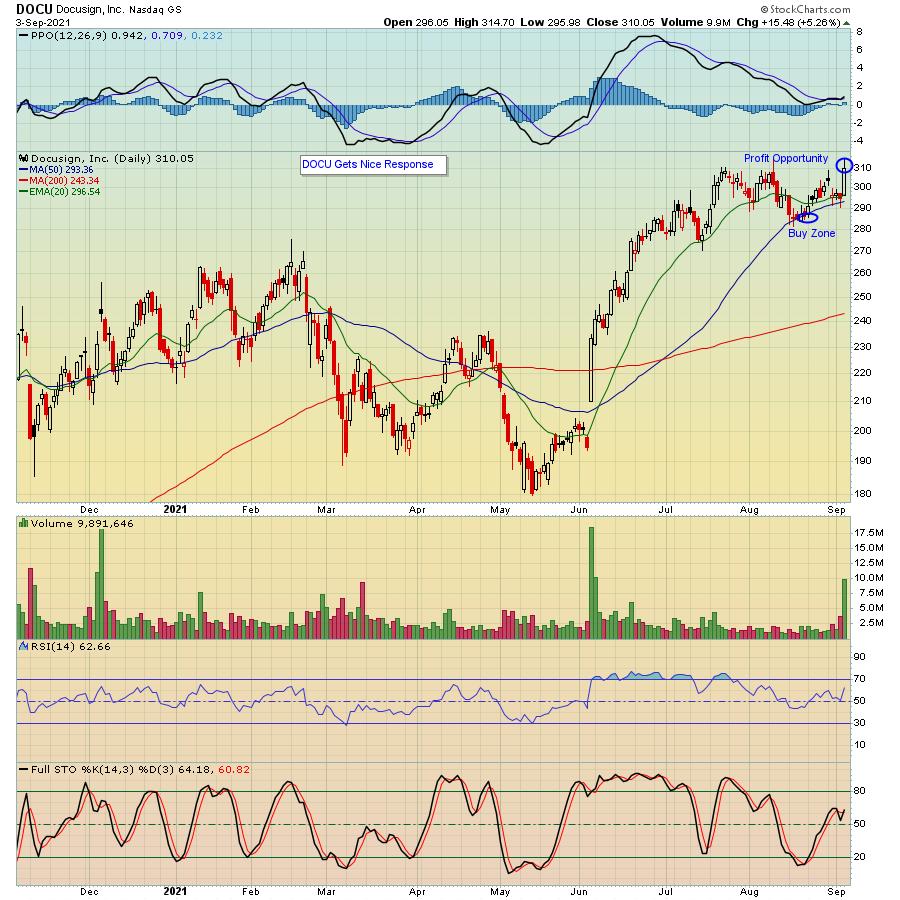 In this case, I waited until the numbers were announced, watched the market response to see if there was any heavy buying or selling and waited to see if it made any sense to go long or short. What I saw, after the dust had settled some, was the stock pulling back into the 280s, in spite of a strong report. Accordingly, I started buying some shares on the pullback and felt comfortable holding the stock overnight, feeling confident it would be sought after once the trading day began. I was not disappointed, as the stock started strong out of the chute, climbing as high as $314.70 before settling down some, and turned into a nice score.

Now, getting back to my original premise. Let's say I owned the stock into the earnings report, it pulled back $9-10 but didn't rebound? I wouldn't be happy! Instead, I waited for the report to be announced, watched the initial market reaction, and felt comfortable buying some shares on the knee jerk selling. This allowed me to take some risk out of the trade - I got it at a lower price than where the stock closed - and I had a tight stop-loss in mind if it continued lower once I owned the stock.

For sure, there are many stories of stocks that soared after a strong earnings report. AMBA comes to mind, as it climbed almost 35% within two days of its recent report, as you can see below. 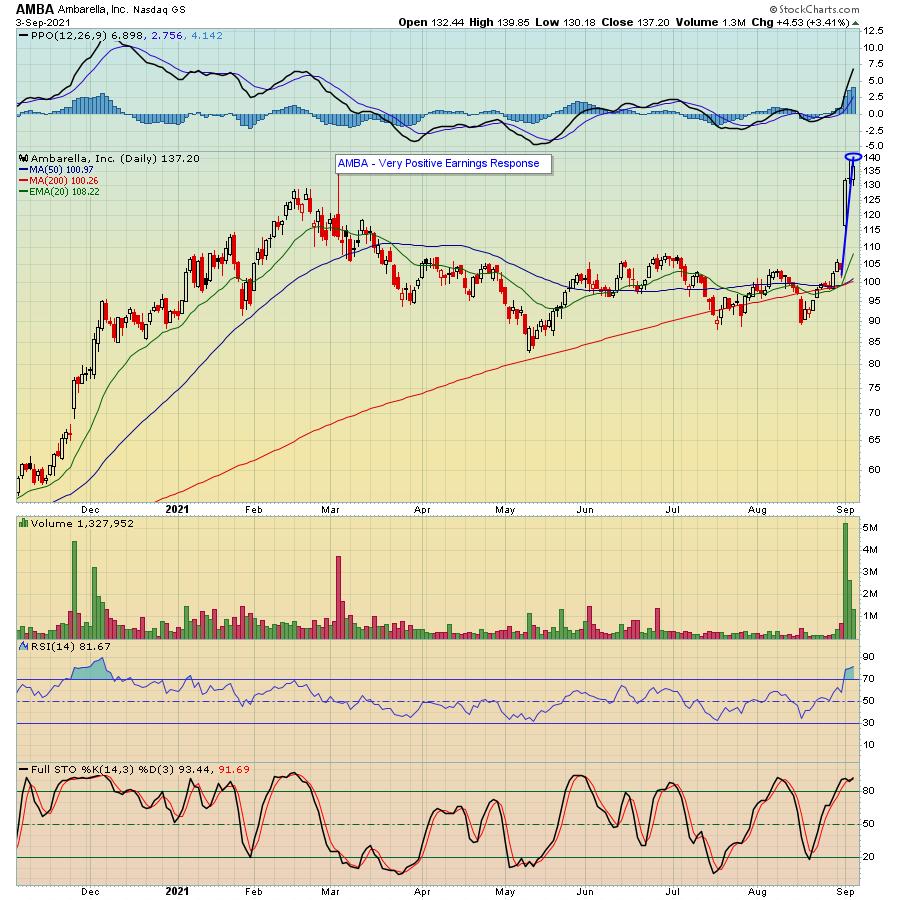 On the flip side, ZM got clobbered when it reported its earnings this past Monday, with the stock losing almost 17% the following day. 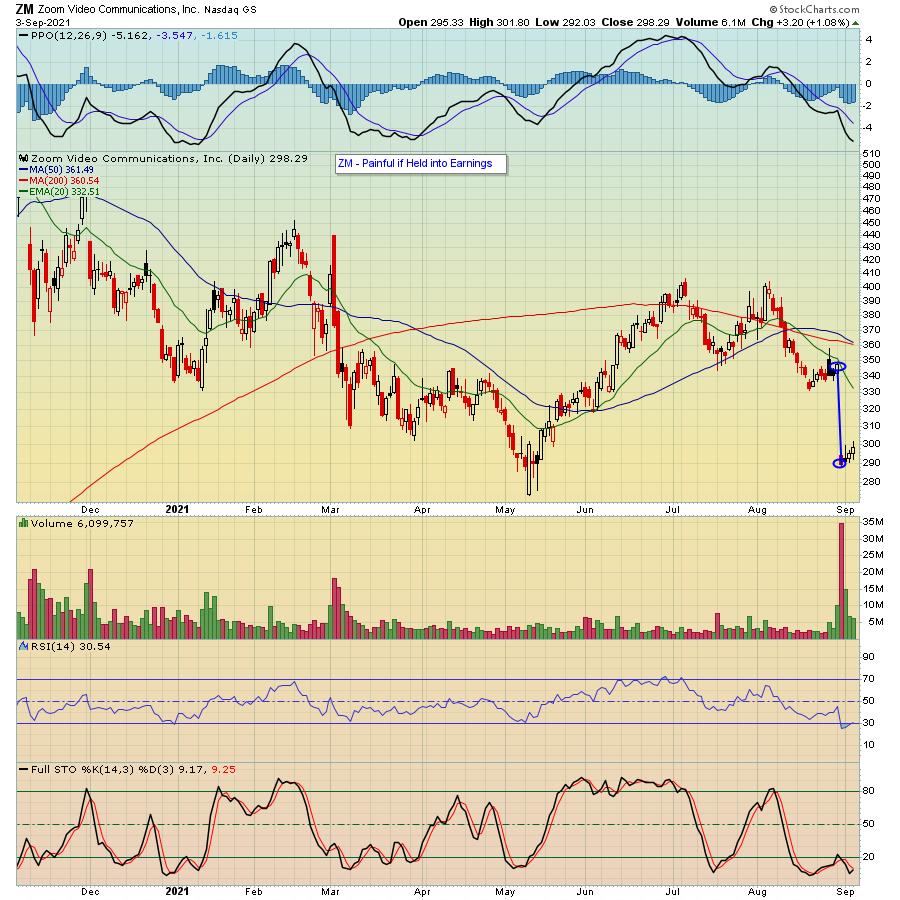 The point being, you never know how the market will react to an earnings report; witness the three charts above. You would have LOVED owning AMBA into its report but HATED giving up 17% if you owned ZM when it reported its numbers. Instead, if you watched the reaction on each of the stocks once their numbers were released, you might have been in a better position to make a smart decision while reducing potential risk.

I want to wish everyone a restful holiday weekend and, if you would like to receive our very informative newsletter, the EarningsBeats Digest, just click on this link and you will receive our FREE earnings/market related updates from our Chief Market Strategist Tom Bowley every Monday, Wednesday and Friday.