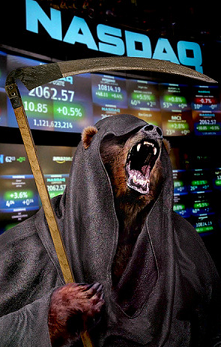 Is this a market correction?  Generally accepted levels (-10%) that most deem as a correction versus just a market pullback (-5%).  Is this going to become a bear market (-20%)?  First, there is not a person on Earth that knows the answer (despite what you hear on TV), and I do not even attempt to claim that I do.  I read a great deal, too much maybe.  Many believe this is just a correction in an ongoing bull market.  Many technical analyst friends of mine strongly offer evidence that a bottom is going to be soon.  And just as many think we are at the top.

There is ongoing comparison with the current situation with 1987 (program trading and portfolio insurance was blamed), 1989 (bailout of savings and loan industry), and 1998 (Asian and Russian crisis along with collapse of Long Term Capital (you remember, the genius-managed hedge fund?)).  And you know what I think about those goofy analog charts – see here.

One constant that is prevalent in all of these periods, is increased volatility.  This feeds on itself and the risk of being in an invested position in the market gets higher and higher.  The arguments for and against the market’s direction are strong, concerns about the high level of short interest, margin debt, Brexit, the theatrics on financial television, and many more.  The age and experience level of guests on financial television is downright scary.  War is never good.  Oil does not seem to want to do anything but creep up now.  Oil does not seem to day anything but creep down now.  The immigration situation is nothing more than social unrest.  Will the government need to bail out the mortgage industry again?  Moreover, homeland security and its stepchild, the transportation security agency (TSA), is just another giant bureaucracy.  Been to the airport lately?

Will the market go up to new highs?   Or will it enter into a long overdue bear market?  I have no idea, but I do know that my “weight of the evidence” approach to trend analysis will put me on the right side of it.  In other words, my opinion and concerns about the market is not how I manage my money.  Periodically a bear market is a necessity to overcome the excesses created during protracted bull markets.  These excesses cause otherwise intelligent people to say things like “this time is different” or they just totally ignore the lessons they learned during the last bear market.  It is not unlike a recession being medicine for the economy.  Moreover, the stock market leads the economy.  Oh no!

OK, if I have you concerned or at least thinking that all is not well with the world, then let me offer you some solace.  I have written numerous times in the past about how the markets love to climb a wall of worry.  My one deviation this time is that it is the last new high that can cause all the problems.  With each new high, the odds of it being the final one become greater.  Almost all the stuff mentioned above is for entertainment, I do not utilize any economic analysis or research, I do not utilize political or worldly situations to make investment decisions, and I do not concern myself with all the fundamentals that are so widely hyped on Wall Street.  Sometimes I feel like I should just put on a pair of bib overalls, a straw hat, and stick a hay straw in my mouth when I describe what I do.  I’m just an old dumb trend follower!  I cannot say it any clearer or simpler than that.  If my “weight of the evidence” trend measure says I should buy, I buy; if it does not, I do not.  And I always use stops.  For the past week, it has me 100% in cash.  Losing money is worse than not making money.  Unfortunately, I think many are going to learn that in the not too distant future.