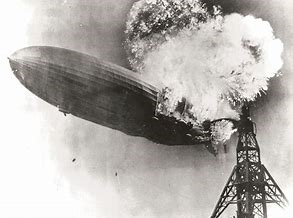 The Hindenburg Omen has been touted often lately.  I thought I’d share with you information about it that I obtained directly from its creator, James Miekka.  Most of the below came from the second edition of my “The Complete Guide to Market Breadth Indicators.”  It is only available from Amazon.

Description: This indication of market tops was created by James R. Miekka and dubbed “the Hindenburg Omen” by Kennedy Gammage of the Richland Report.  You’ll recognize Kennedy as the former provider of the McClellan Oscillator and Summation Index numbers on FNN and now, CNBC television.

The Hindenburg Omen is a sell signal that occurs when NYSE new highs and new lows each exceed 2.8% of advances plus declines on the same day. In addition, the NYSE index must be above the value it had 50 trading days (ten weeks) ago. Once the signal has occurred, it is valid for 30 trading days. Any additional signals given during the 30-day period should be ignored.  During the 30 days, the signal is activated whenever the McClellan Oscillator (MCO) is negative but deactivated whenever the MCO is positive. The signal starting point was originally calculated to be when NH and NL equaled or exceeded 2.4% of total issues traded but was later simplified to 2.8% of advances plus declines. This signal was developed as an improvement upon the Split Market Sell Signal developed by Gerald Appel.  Appel’s signal used a fixed number of new highs and new lows (45 of each), which was not indexed for increasing numbers of shares trades, and his signal did not require validation by the MCO being negative.

Interpretation: This signal generally occurs after a rising market when the number of new lows is rising rapidly, but when new highs are still quite numerous. The large number of highs and lows suggests that the market is indecisive and probably at a turning point. Of course, a similar scenario can occur during a falling market when new lows are numerous but new highs begin to rise rapidly. The latter condition would suggest that such market indecision could be a buy signal in a falling market. This has not been studied, at least not by James Miekka, other than to note that the sell signal is not reliable when NYSE is below its ten-weeks-ago value. To utilize the Hindenburg Omen signal, Miekka suggests the following:

Note: Jim Miekka has provided a significant indicator of market danger.  An indicator developed from a logical point of view is usually one that will serve you well.  This one does just that.  In Chart A I have tried to recreate this indicator as closely to Miekka’s parameters as I can.  Any difference between the chart signals and Jim’s actual are a fault with my programming.  Click on the chart to see updated version. 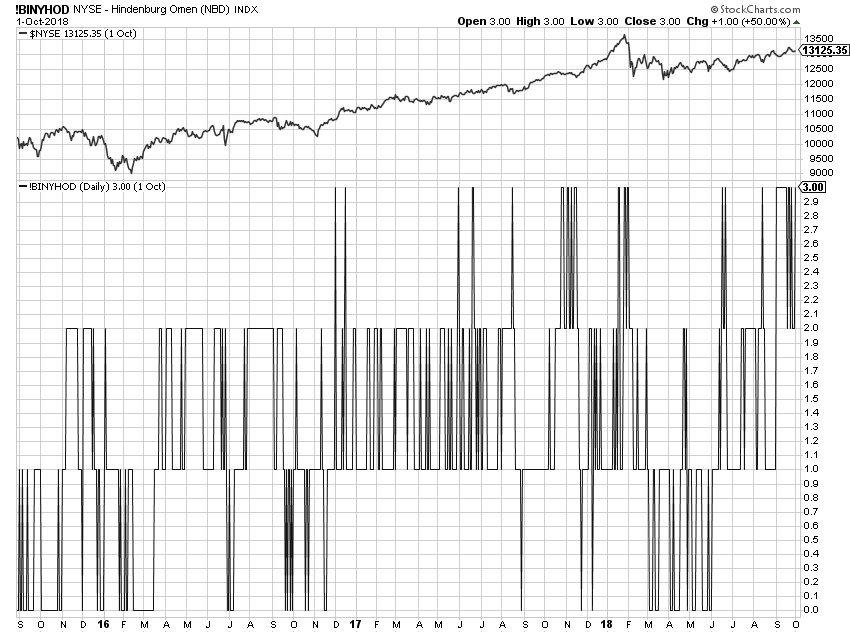 While it is not the purpose here to discern performance of these breadth indicators, Jim provided this for me and I want to deviate from that purpose just this once.  Table A gives a history of the Hindenburg Omen from 1993 to 2004, using the old NYSE as the index. To convert to new NYSE, multiply the points by 10.78. 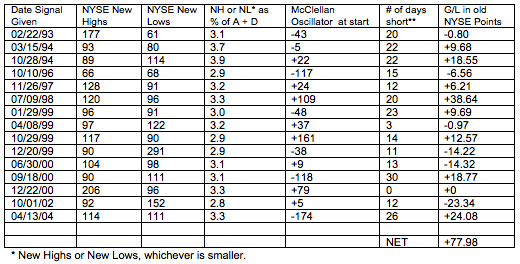 ** Short only when the McClellan Oscillator is negative for 30 days after signal is given.

My friend Tom McClellan has often written about this concept at The McClellan Market Report.

Jim’s Father, Richard provided me with Jim’s Obituary.  I spoke with Jim on the phone many times; what a tragic loss.  He shared his work with me without concern.

James Richard (Jim) Miekka who was blind, was walking on the side of a road on the morning of August 19, 2014 with his guide dog, Zoey, when he was struck by an SUV. He was pronounced dead at the scene. So ended a fascinating career that spanned 54 years and encompassed periods of both glory and tragedy.

James was born in Massachusetts on July 21, 1960. He had a rather ordinary childhood that was punctuated with glimpses of special abilities. He started to talk at 8 months and began to read when he was three. At the age of 8, his teacher accused him of cheating on an arithmetic exam because he wrote down the answers without showing any calculations. When his mother was called it to discuss his wayward behavior, mom asked that he be brought into the conference room to demonstrate his ability to do the calculations mentally. The interrogators were asked to pick any two 3-digit numbers and to write them on a blackboard. Jim stood at the blackboard and correctly wrote the answer without making any other notations, absolving himself of the cheating accusation.

Jim became intensely focused on any subject that caught his fancy. After the usual absorptions with dinosaurs, plants (especially cactus plants), and planets, he became enthralled with bicycles, and eventually made two transcontinental round trips from Massachusetts to California by bicycle when he was 16, then again when 20. He was also very proud of getting a speeding ticket (vehicle model Schwinn) for going 55 MPH drafting behind a truck.

In college, Jim earned a BS degree in Environmental Science with a minor in education and then became employed as a high school science and math teacher in Brawley, California. James lost his eyesight in 1986 following an explosion from a chemical experiment. He and his brother were trying to find a better way to extract minerals from rock, but the chemicals caused an explosion that damaged his hands and eyes. He ultimately was blinded by complications during an ensuing eye operation. “The last thing I saw was the eye chart going into surgery,” he told WSJ journalist Steven Russolillo in 2010.

As he recuperated, James began listening to television shows that focused on investing. He became interested in technical analysis while following Kennedy Gammage on FNN. He then started actively trading stocks and began writing a financial newsletter under contract from a local financial adviser.  He met and became a close correspondent with Gammage who had derived some of his own indicators from the work of Sherman and Marian McClellan, creators of the McClellan Oscillator and its associated Summation Index. Eventually Jim began selling his newsletter, which he named the Sudbury Bull and Bear Report, to a number of interested investors and financial advisors. His greatest reason for the SBB report, though, was to help organize his own thoughts for personal investing. Since Jim was blind, he dictated the weekly updates to his father, Richard, who acted as secretary/editor for the newsletter.

It turns out that nobody had previously noted that there was a simple direct mathematical relationship between the MCO and the MCOSI, so when Jim published the formula, it was quickly tested and then adopted by virtually everybody using those indicators. It is now known as the Miekka Formula.

Jim made numerous modifications to the published mathematical indicator formulas of other technicians, some of which he published in his newsletter, and some of which he had not disclosed at the time of his death. He found that, on average, short term indicators remained valid for more years than did longer term indicators, so studied stringing together groups of short-term indicators to create investment systems. Some of these worked well for a time, but most faded as stock market indexes and investment vehicles changed (evolved) over time. The necessity to create timely new predictors/indicators was an incentive for Jim to continue the newsletter. Because he could not see, Jim seldom used charts or graphs, but concentrated on formulas.

His most famous indicator was the Hindenburg Omen, a modified and restricted version of an indicator earlier published by Martin Zweig, then tweaked by Gerald Appel.  The Omen (activated when NYSE daily new highs and new lows each exceed a threshold level and also meets several other criteria) has shown up within 60 days before every major stock market plunge but has given so many false alarms that it is usually ignored by investors (but makes many nervous nonetheless). Jim sought ways to reduce the false alarms, such as restricting the types of stocks in the signal, but never found a magic fix.

Jim's favorite hobby was target shooting with pistols and rifles. As with everything he pursued, Jim immersed himself wholeheartedly in this leisure time activity, and developed the ability to score in the 90's (perfect score 100) shooting at standard NRA rifle targets from a distance of 100 yards, and occasionally at 200 yards. To accomplish this feat, Jim designed, with some sighted help, a custom apparatus that converted light into sound, and allowed him to "hear" his targets.  Now this scope is being studied by Michigan State University as an aid for the blind. Jim with his shooting apparatus can be seen in action on You Tube by Googling "blind marksman."

Jim was active in charitable activities. He spent time as an unpaid tutor at a local high school, and he raised more than $3,000 for the Florida-based organization Blind Americans by walking 130 miles from its headquarters in Hernando to St. Petersburg. He used a global positioning system and Zoey, his guide dog, and completed the walk in a week and a half.

As an advocate for the blind he was vice president of Blind Americans in Hernando Florida, once walking 130 miles from his home in Homosassa to Saint Petersburg to raise funds for the organization. Channel 9 TV documented his effort.  At other times Jim’s activities have appeared in The Tampa Bay Times, The TAMPA tribune, The Bangor Times, Der Spiegel in Germany, and BBC in England and on CNBC television, but his most important legacy came from the way he lived his day to day to day life replacing fear with faith and despair with hope with a message that others can do it too.

James is survived by his girlfriend Susan Tate, parents, Richard and Jeanette Miekka, a brother, Frederick Miekka, and a sister, Cynthia Bordas.