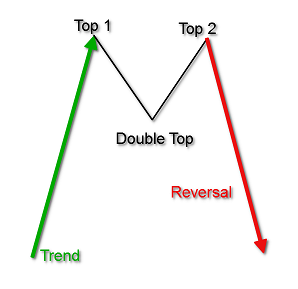 I developed this method primarily for candle pattern identification when I wrote my book, Candlestick Charting Explained (the book was first published in 1992 and now is in its third edition).  The reliability concept equally applies to any type of pattern, including the many chart patterns widely used in technical analysis.  My argument and complaint about most technical analysts, is that for a reversal or continuation pattern to be identified, you MUST first identify the trend.  How can you have a reversal pattern if you do not know what the trend is?  What is it reversing?  Below I show the analysis process I used.

The following three assumptions were used in measuring the success and/or failure of the many different patterns:

1. The pattern must, of course, be identified based upon its open, high, low, and close relationships.

2.  For the pattern to be identified, the trend must be determined.  This is interchangeable with the previous assumption; each must exist in the methodology.

3.  Some basis of measurement must be established to determine the success of failure of the pattern.

To make a creditable prediction, you either know the current trend of you do not.  Both assumptions and possibilities have been used here.

The Trend is Known

Once a trend starts, the odds are that it will continue.  Every student of science or engineering will recognize that this is nothing more than Newton’s First Law of Motion, which says, a body continues in a state of rest or of uniform motion in a straight line unless it is compelled to change that state by forces applied to it.  Simply said, it is easier for a market to continue its direction than to reverse its direction.

Therefore, the continuation of a trend is more common than the reversal of a trend.  Remember, we are talking about the short-term future here. 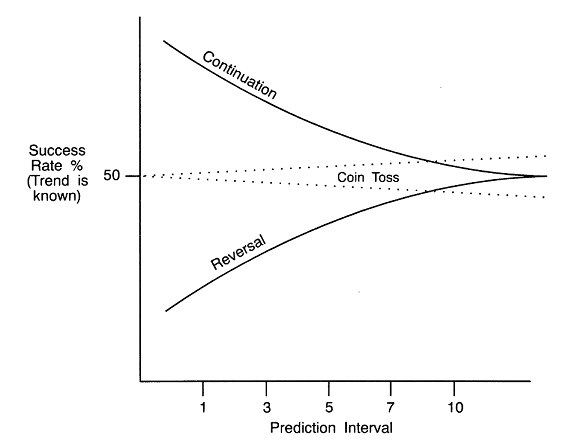 The Trend is Not Known

Sometimes you do not know what the trend is before making the prediction.  In such cases, a coin-toss type of prediction is made about whether the price will go up or down.  If you do not know the trend, the odds of its continuing or reversing would fall into the area of 50%.  The difference above or below 50% would reflect the directional bias of the data used in the analysis.  Again, the success or failure is based upon the price at the prediction interval relative to the change in trend.  This fact is also shown in Chart A.  Remember, most patterns require that the trend be identified.

Reversal patterns (which most are) are compared to Reverse Current Trend and further broken down into upturns and downturns.  Since reversal patterns must go against the very trend that defines them, their measure of success would not be as rigid as that of a continuation pattern.  In fact, their measure of success could actually be less than that of a coin toss, since they are predicting a change in the current trend, a trend which is supposedly known.

Bottom Line:  Come up with a method to identify the short-term (less than 10-12 days) trend and then the pattern identification process will work much better for you.

Late Note: I was on the treadmill this morning watching Bloomberg when the job numbers were released.  They came out well below analysts' expectations and the futures markets sold off.  A technical analyst should never fall victim to watching guesses about economic numbers; they will fade away in a few days if not less.  I used to show a chart without dates or names and ask folks to point out the earnings reports for the security.  They, of course could not do it.  Neither can anyone else. They are nothing but short-term noise.

Her Majesty and I are leaving on a 4-week golf, sight-seeing, and grandkids vacation tomorrow.  I do have one article ready that I will publish in a week or so and then nothing until our return in early April.  Stay well.