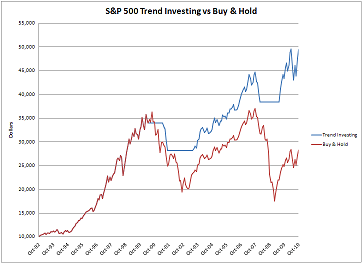 The timing of this article is appropriate. Part of this was written by Tim Chapman who was a founder of PMFM, the company I worked with and later became Stadion.  I liked its message so am updating it with this article.  I remember back when I was managing money, I had an interesting conversation with a longtime client. He was appreciative that I was able to protect his retirement account and produce a positive return over the past three years (2007-2009 bear), but he almost felt guilty mentioning it to friends who've lost 50% or more of their money. He had a great line when he said, "I know that friends shouldn't let friends buy-and-hold, and I want to tell them there is a better way. But now that the damage is done, is it too late to help them?"

I told him I have this conversation several times a week with prospective clients who feel trapped in their investments. While it is true that if we are at the bottom, and if the positions they are holding are future winners, then they have a chance to recover faster by hanging on. But those are some pretty big "ifs." Here are some thoughts his friends should consider.

They must accept the fact that they've lost money. I've written many times about bear market "traps" that keep investors fully invested all the way down. These traps are all based on emotion - not fact. To break out of this trap, the first step is to come to grips with the fact you've lost money, the past is the past, and the only thing that matters is the future. Don't get caught in the "breakeven" game. Instead, focus on the money you have left and how you can reach your financial goals.

Is the worst over yet? I've heard this line more times than I can count. There are two FACTS you can count on: The market will not go down forever; but NO ONE knows when it has hit bottom until well after the fact. Consider 2018, which started with a bang and then we have two big sell-offs followed by a good up move until September and the consensus opinion was "the worst was over" and good times lay ahead. But once again they were wrong, and the remainder of 2018 was downright scary.  Currently, the market is a little scary.

It always makes sense to avoid losing money. It seems irrational for someone to say, "I've lost most of my money, but I'm comfortable losing some more." But that is exactly what many investors are saying, not with their words but with their actions. They're so caught up in the "If I sell now, I'll take a loss" syndrome, that they completely lose sight of the fact they might well lose more, and they don't understand how difficult it is to recover losses. Remember, if you lose 50%, you need to double your money just to get back to even.

How can you be sure your losers will be winners when the market turns around? Have you ever heard of Solitron Devices, Syntex, Teledyne, National Video, and Dome Petroleum? They were considered "go-go" stocks in 1968, the Amazon and Yahoo's of that era, but they didn't shine so bright after the 1973-74 bear market. I can give you examples of all the bear markets when some stocks just disappeared. There is absolutely no guarantee anything that was once really good will ever return to glory. Many have already folded the tent and many more will follow. When the market does start going up it is important to have a way to identify leaders, to make sure your money is as productive as possible.

Stocks are not always good in the long-term as noted economist John Maynard Keynes said, "In the long-term we're all dead", so it is necessary to define long-term in the context of the market. A couple of years ago, many advisers told clients that if they had a 3-5-year time horizon they were "long-term investors" and should buy stocks because stocks were always good in the long-term. Too many clients have learned the painful truth that stocks are NOT always good in the long-term. Consider the Dow Jones Industrial Average from 1966 to 1982 a "long-term" sixteen-year period. Again, from October 2007 it took 5.5 years to get back even. Over those time frames the stock market provided a return of exactly zero. Actually, it was a repeating sequence of good years followed by bad years, with the net result being zero. How many investors are prepared to ride a financial roller coaster for 16 years and have nothing to show for it?

My rules-based trend following model works in all types of market conditions. I constantly tell people that there is no such thing as a perfect investment strategy. I certainly do not believe that my approach is perfect, but it does allow me to do okay in all types of market conditions. When the market is going up in a meaningful way, I  participate as much as possible. When the market risk is too high, or the trend is down, I protect against major losses with stop loss protection. If the long-term trend is sideways, I can capture some gains when they come along and then hang onto them during the bad times.

My goal is not to "beat the market." I just want to make sure I get a reasonable, decent return over time, and have an investment strategy I can live with.