Apple reported earnings yesterday after the close, missing the 1.33 estimate by five cents. This set up a fundamental reason for the market to punish the stock, and there is a technical situation also pointing toward a potential decline. AAPL is challenging the all-time highs set in 2012, but there is a PMO negative divergence, which undermines the potential for price advance. Nevertheless AAPL is currently up about +3% for the day, indicating that the market is not worried about the earnings miss. With a P/E of about 16, the stock is still fairly valued, which leaves plenty of room for a rally to about 119, where it would be at the overvalued level.

While AAPL has punched through the resistance at the 2012 high, it is not yet a decisive breakout. A move to about 99.16 would provide technical evidence that the breakout is secure. Until then, the potential for a long-term double top, leading to a decline, is not entirely erased. 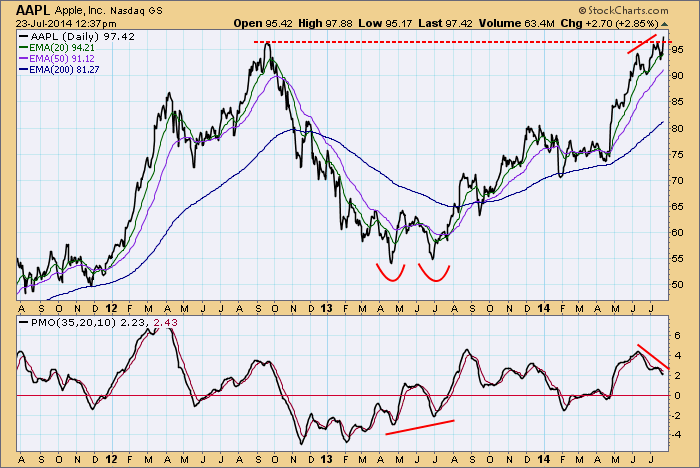 While the double top is our immediate concern, there are other lessons to be learned from the chart. Most will remember how AAPL was universally loved at the 2012 peak, and from there it experienced a -37% decline into the double bottom in 2013, at which point it was universally hated. Of course the double bottom with a PMO positive divergence provided an excellent signal to go long the stock. This chart and its story belongs in a textbook.

Conclusion: In spite of an earnings miss, AAPL continues to make all-time highs and has broken through long-term resistance. That is definitely a bullish reaction. Fundamentally, it has room to go higher; however, it is not completely out of the woods technically, and the double top could emerge. At this point it seems unlikely.