I receive technical alerts whenever there are DecisionPoint signal changes on the ETFs and Indexes that we cover in the DecisionPoint Market/Sector Summary. Today, while there were only a few, they were centered around the Utilities sector. The two utilities ETFs that we cover are the Utilities SPDR (XLU) and the equal-weight version RYU. Today, XLU generated a Short-Term Trend Model (STTM) Neutral signal and a Price Momentum Oscillator (PMO) SELL signal. RYU generated a Long-Term Trend Model (LTTM) SELL, a PMO SELL signal and a STTM Neutral signal.

It took until today for XLU to breakdown below rising bottoms support. Support at the June low is nearing. XLU is still technically in a Bull Market that began when the 50-EMA crossed above the 200-EMA, but it appears that won't hold up much longer. The next area of longer-term support is at the October low (as with most issues right now). The PMO topped and generated a negative crossover SELL signal in overbought territory. The crossover was clean and there seems little hesitation in its move lower. The SCTR value is fading fast and OBV shows high volume on the declines. 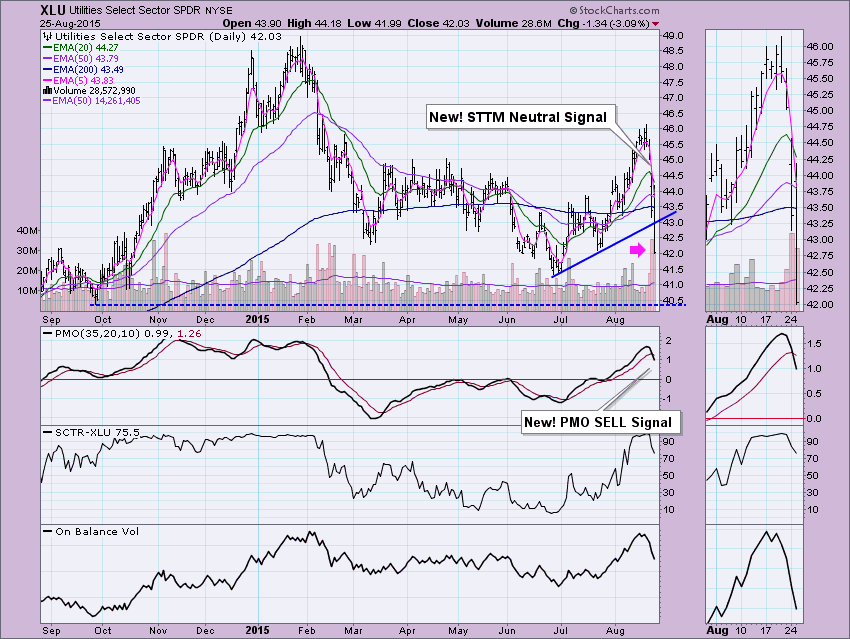 The equal-weight version of the Utilities sector is doing more poorly. Unlike XLU, RYU is now technically in a Bear Market because the 50-EMA crossed below the 200-EMA. It is barely above support at the June low. Given the new STTM Neutral signal, I would suspect that will not hold. A new PMO SELL signal in overbought territory is also very bearish. 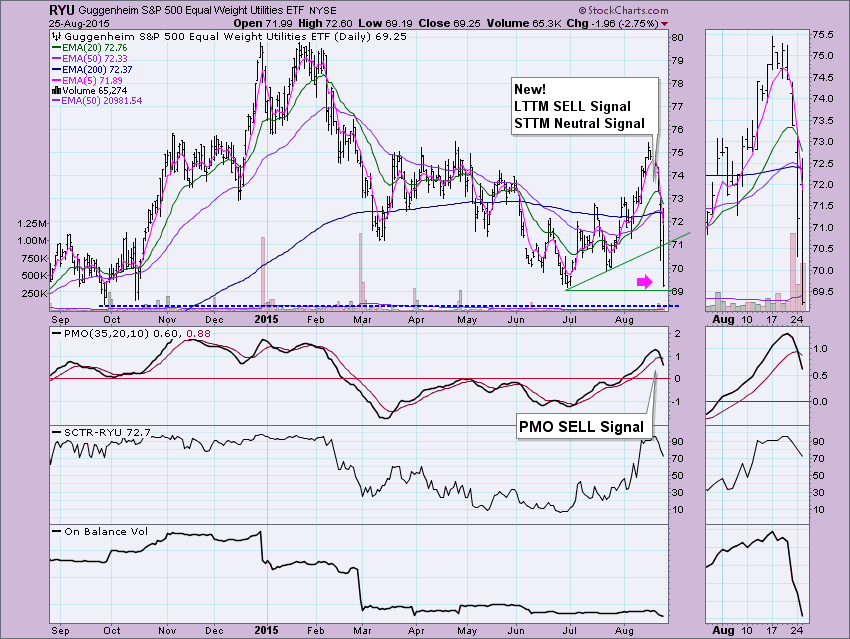 Conclusion: I recommend you take a look at today's DecisionPoint Alert. You'll note that not only did the Utilities sector get hit hard today, but the Consumer Staples SPDR (XLP) and the equal-weight version RHS also received Intermediate-Term Trend Model (ITTM) Neutral signals. Sector rotation is not my specialty, but I find it interesting that the "safe" sectors during an economic slow-down are now beginning to fail. Generally this would suggest that the economy is going to start turning around. However, I'm suspect of that conclusion. All of the sectors are suffering due to the large market correction. Also, note that while both XLU and RYU are turning over, they aren't being hit as hard as other indexes and sectors. After the crash on Monday, support at the June lows for XLU and RYU are still intact while we are seeing most other issues breakdown below the March and October lows.