No new signal changes to report, but I do want to mention that the PMO for the NDX continues lower with no hesitation. For the other three indexes, the PMO BUY signals are intact, but short-term PMOs are now all declining. 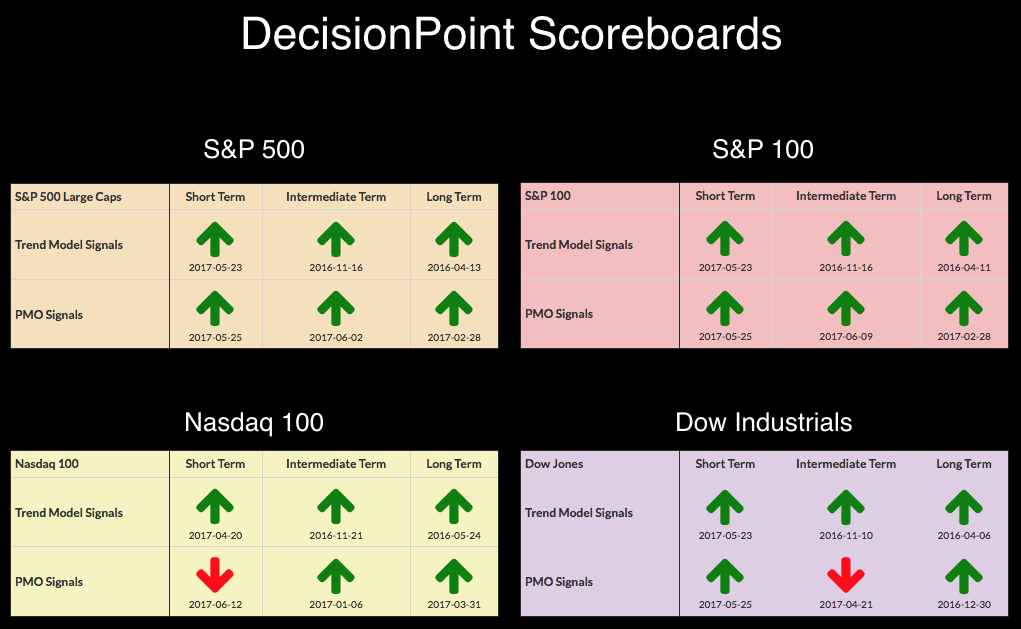 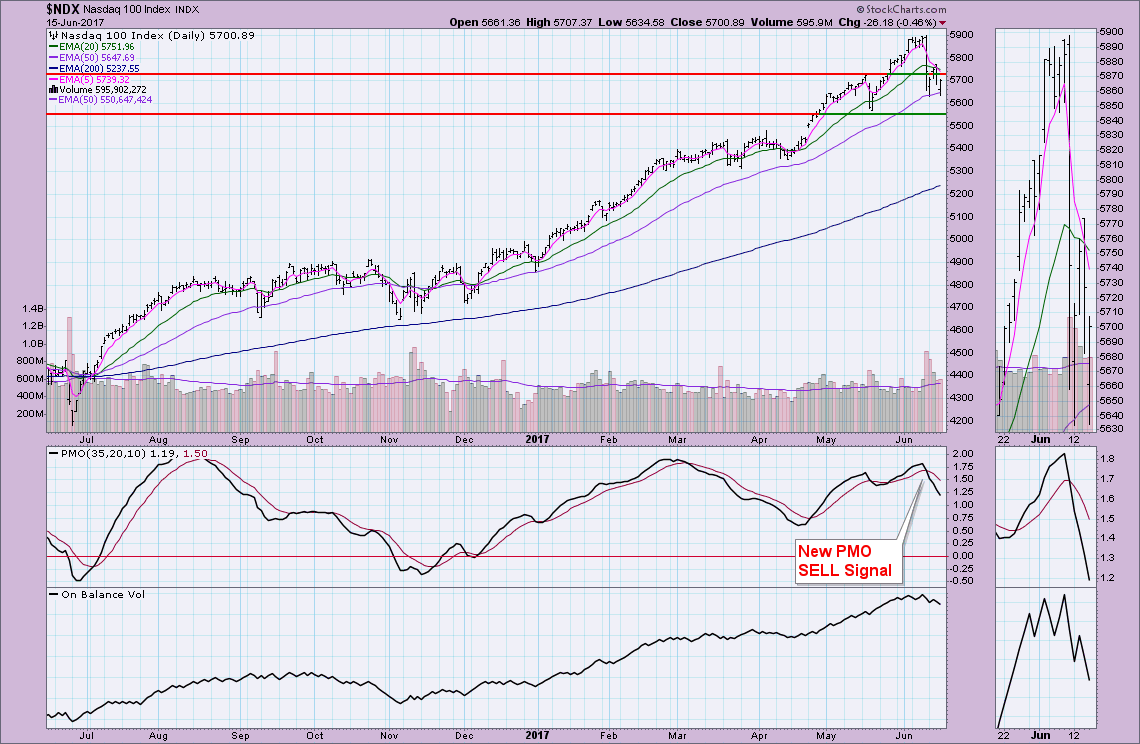 Prices gapped way down on the open after what seemed to be a recuperation from the Fed decline at the end of yesterday. The previous gap was closed as price continued to rise and erase big losses from earlier in the day. Technically, the opening gap today has not been filled, though prices seem to be ready to push past yesterday's close fairly soon as a nice rising trend channel is in play.

As you can see, the PMO has topped and OBV is beginning to slide faster than price which is a concern in the short-term. Overall, I still believe that the $240 level should hold as support if the decline continues. There is still a bullish confirmation on the PMO with rising tops matching rising price tops. If we see the PMO dip below its previous bottom, that would set up a dangerous negative divergence, but we're not there yet and the SCTR is still quite healthy. 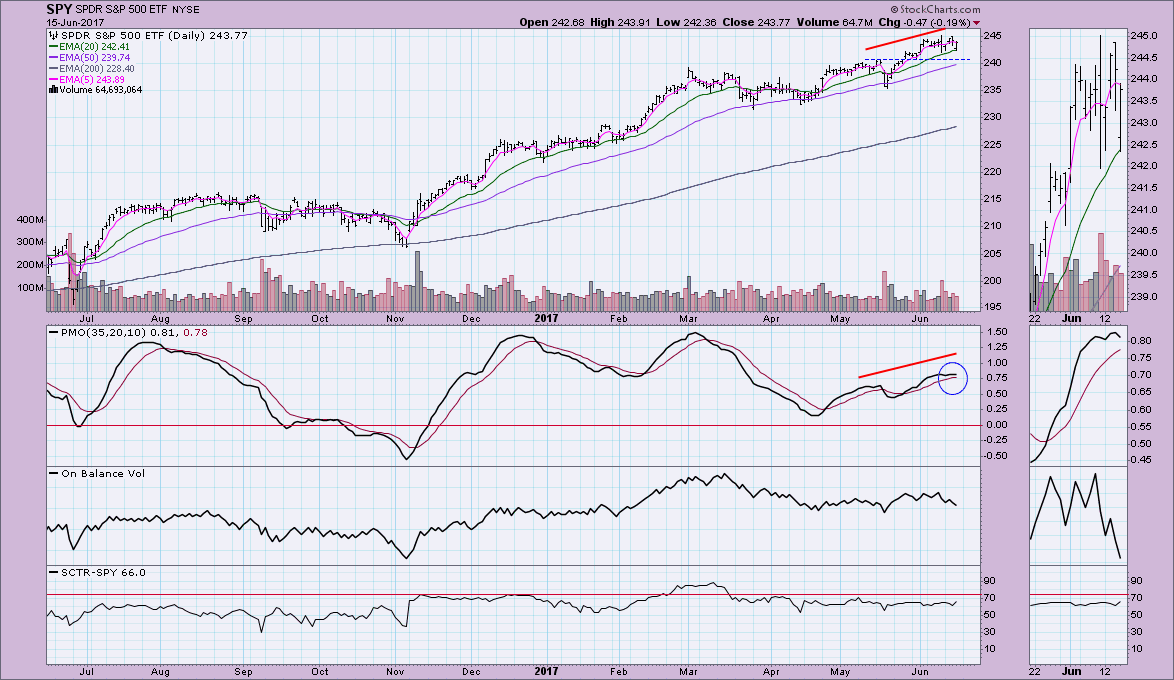 Ultra-Short-Term Indicators: I'm waiting to see some climactic readings on breadth, but not so. Net A-D Volume spiked slightly, but not enough to call this a selling exhaustion. The Bollinger Bands on the VIX have closed up again, so it may not be that helpful given BB penetrations will be easier to accomplish and could be misleading. 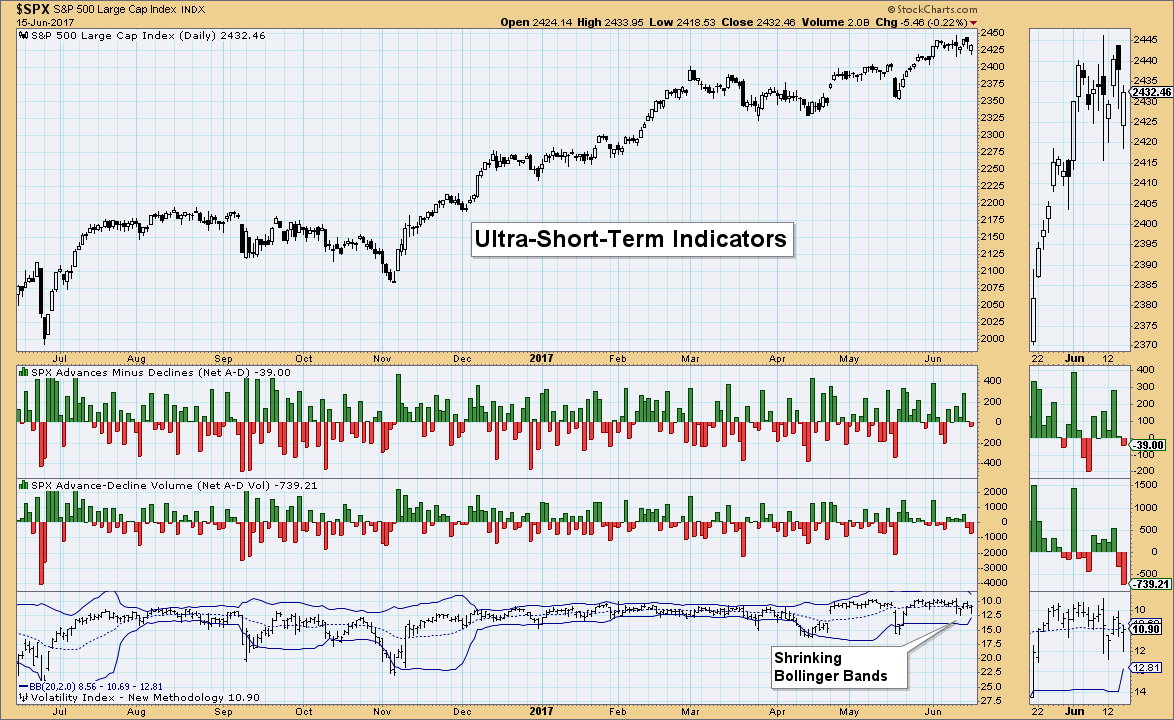 Short-Term Indicators: Consolidation managed to clear overbought conditions on these indicators which suggests internal strength. However, we are seeing some issues with the STO-V which makes me think that volume is not confirming price right now. If we see the STO-B begin dropping, I'd then expect a test lower than the $2400 level. As you can see, there are plenty of possibilities. 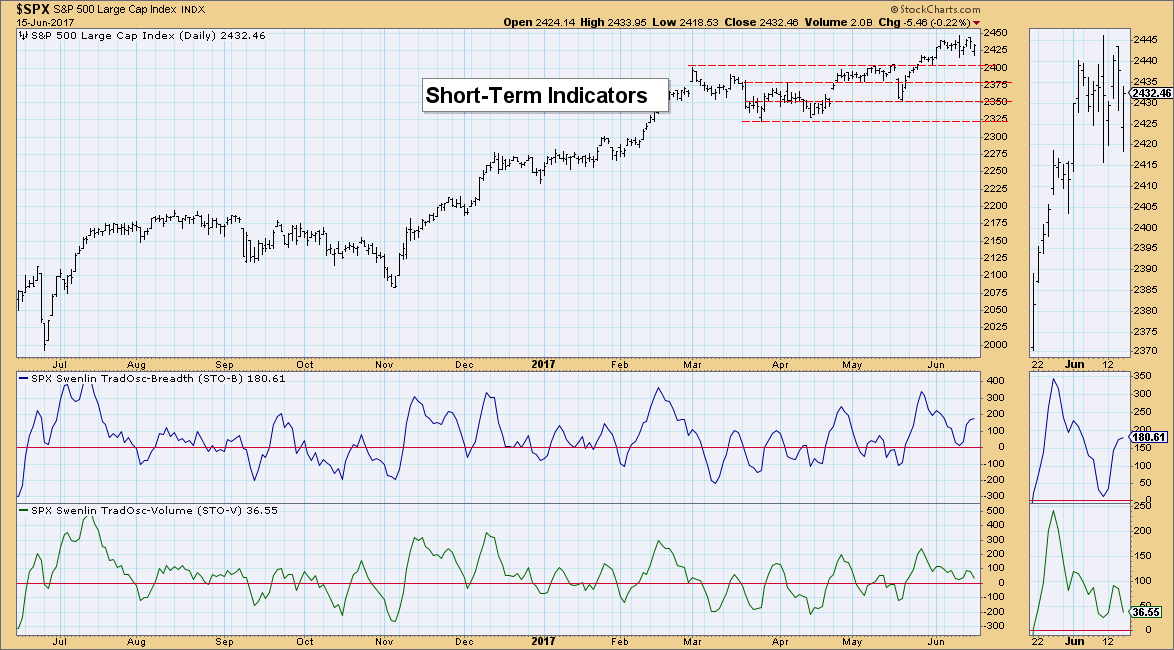 Intermediate-Term Indicators: These indicators have been quite bullish but are now showing some signs of deterioration. As always, I won't read too much into this until we start seeing negative crossovers the signal lines. 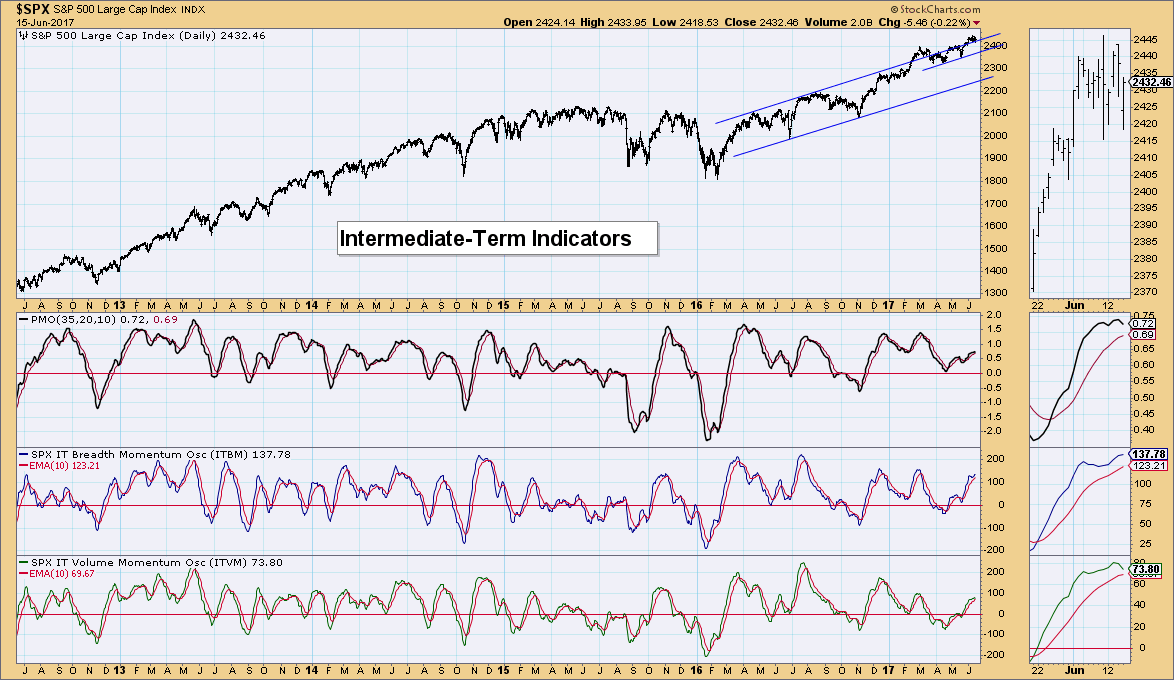 Conclusion: I've had emails from some of my bears about impending doom, but I'm not seeing our indicators spelling out a major crash or correction for the future. Tomorrow will tell us quite a bit, as our weekly charts go final and we can see what the weekly PMOs are doing. They typically give us nice warning before a crash, but price shocks are always a risk. Be sure not to miss Carl's "DP Weekly Wrap" this weekend where he will review the weekly charts of the SPY and the "big four".

I got to have a chuckle or two with some Twitter followers about the timing of my blog article on Tuesday night with the headline that the Dollar was finding favor, while Gold and Bonds were not. Of course, the next day saw a sizable hit on the Dollar and nice rallies on Gold and Bonds. Well, the article may not have been timed well as far as Wednesday's trading was concerned, but I believe the analysis is being confirmed now. While it was a deep decline yesterday, it still managed to bounce off support nicely and has managed to erase yesterday's losses and breakout above last week's high. The PMO gave us a timely BUY signal and you'll note that the SCTR, while reading just above 10, is still improving. I'm looking for a move to test overhead resistance at about $25.50. 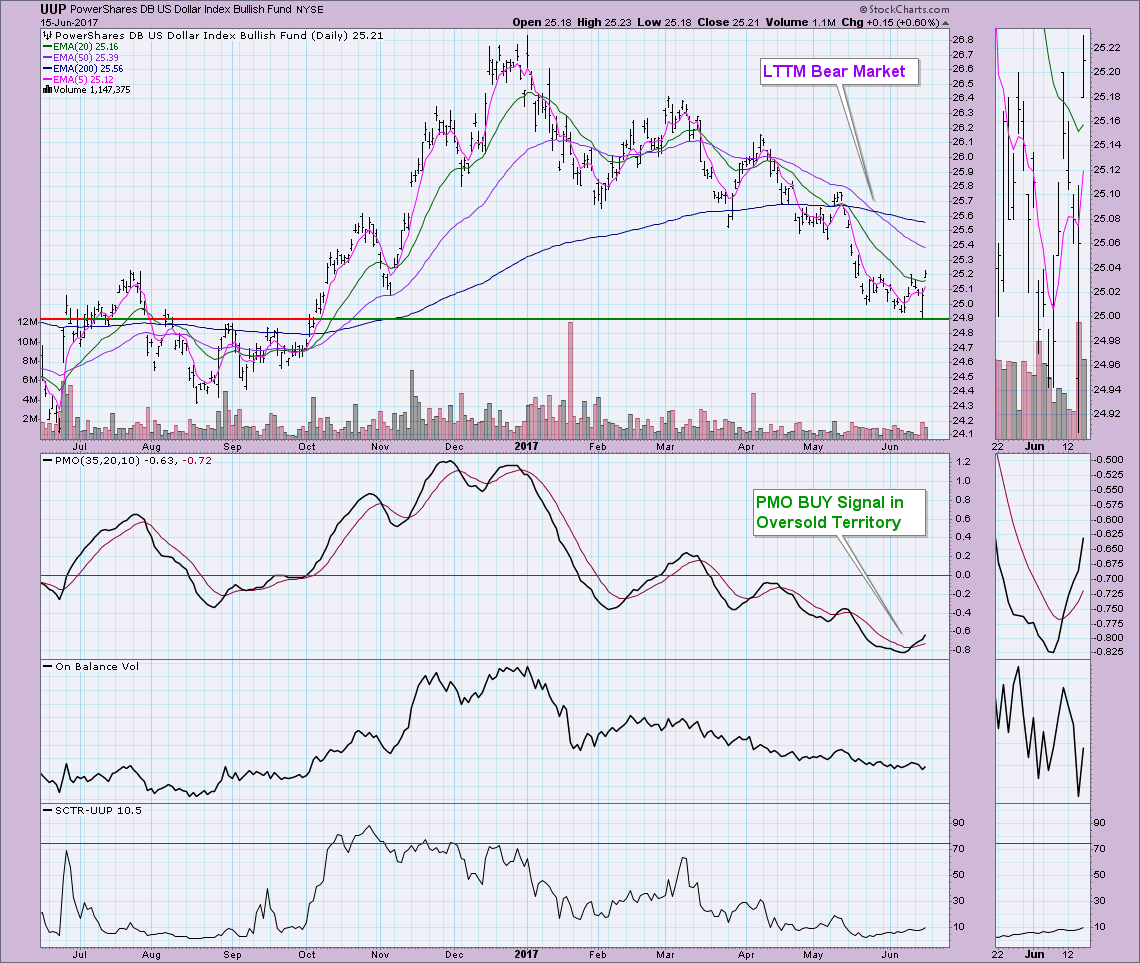 Gold continues in its declining trend and today the PMO posted a new SELL signal. I don't like it at all, especially when you look at what could be a double-top and the negative PMO divergence with price. A ST Trend Model Neutral signal nearly triggered today. Sadly, I would look for Gold to at least test the neckline or rising bottoms trend line in the $1215 to $1230 area. 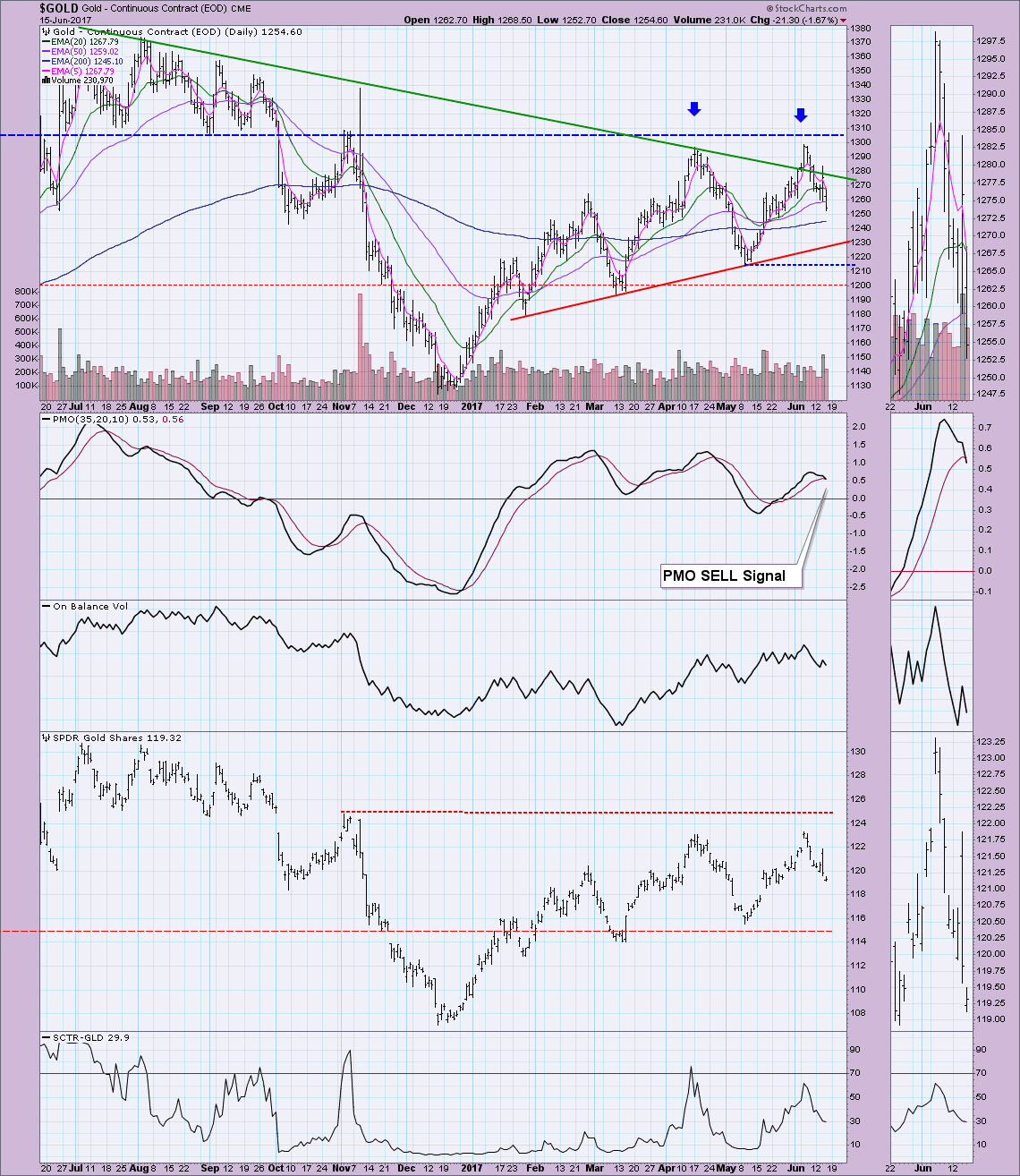 While price has been trying to convince us a bottom is in on Oil, the PMO, OBV and SCTR have all prevented me from believing it. Annual support at $9.23 has now been broken. Oil looks like it could easily fall to $43/barrel so I'm still not convinced a bottom is being put in right now. When the PMO switches direction, then we can talk. If a $9.18 close is not the bottom, where is support for USO? 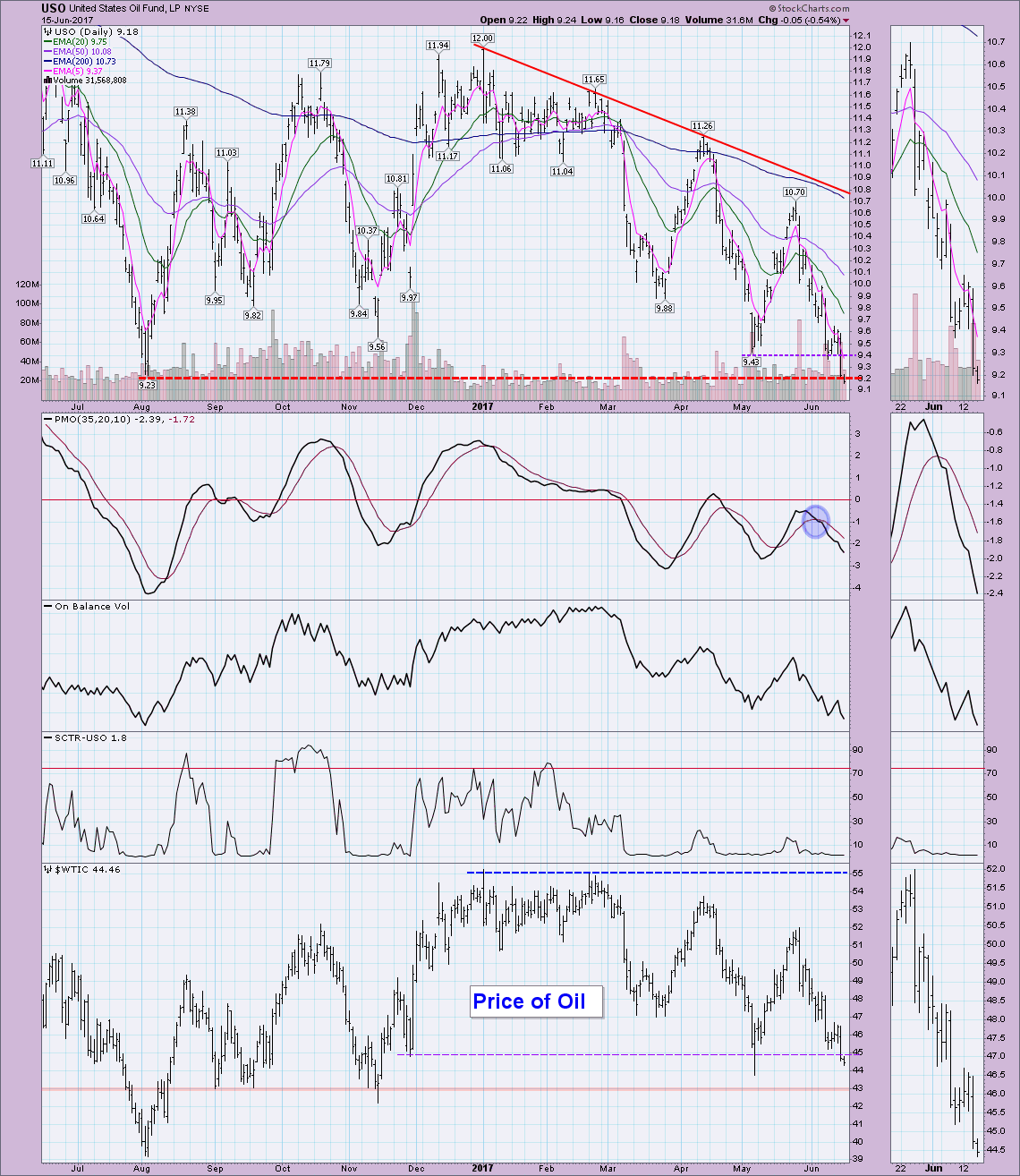 You have to move to the weekly chart. The PMO is on a SELL signal and still dropping like a rock. You can see that $9.18 is not really as low as it can go. Risk is still high when you see that the next support level is $8. 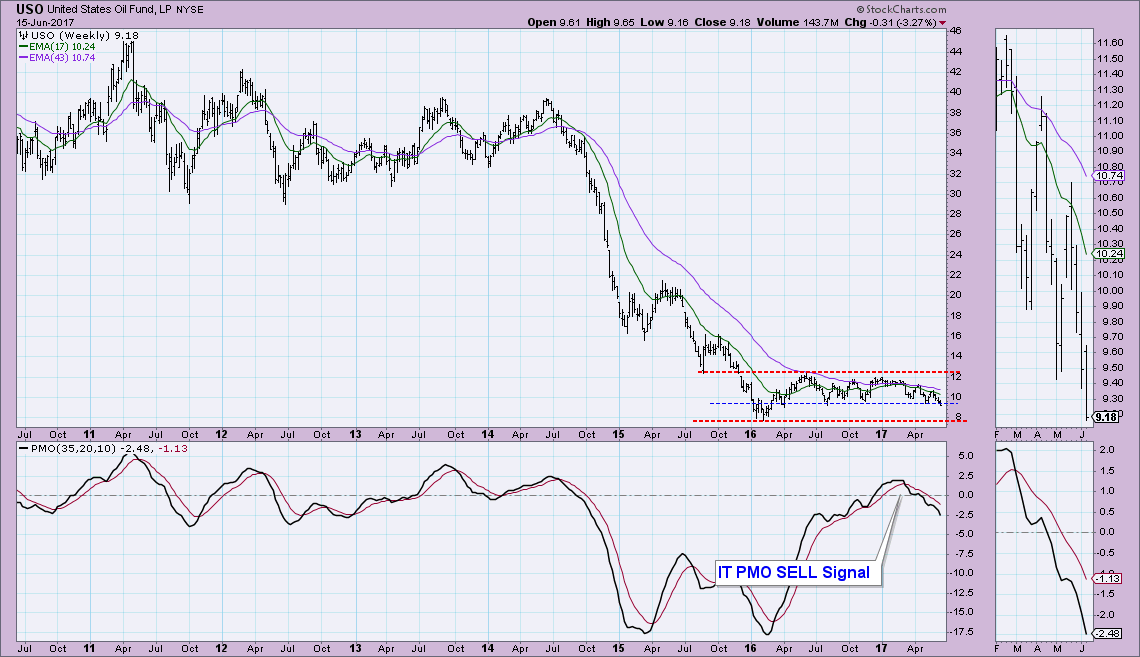 Bond appear to be finding favor after all, but... we still haven't seen that original gap close and I think that is critical if bonds are going to move into a strong rally. TLT is very close to a positive 50/200-EMA crossover which would trigger a LT Trend Model BUY signal and effectively move TLT into a bull market configuration. The PMO head-faked and is rising again after avoiding a negative crossover SELL signal. The SCTR is rising and healthy; however, the OBV did just put in a negative divergence, with OBV tops angling lower while corresponding price tops are rising. This could portend another test of the 20-EMA before the rising trend continues. 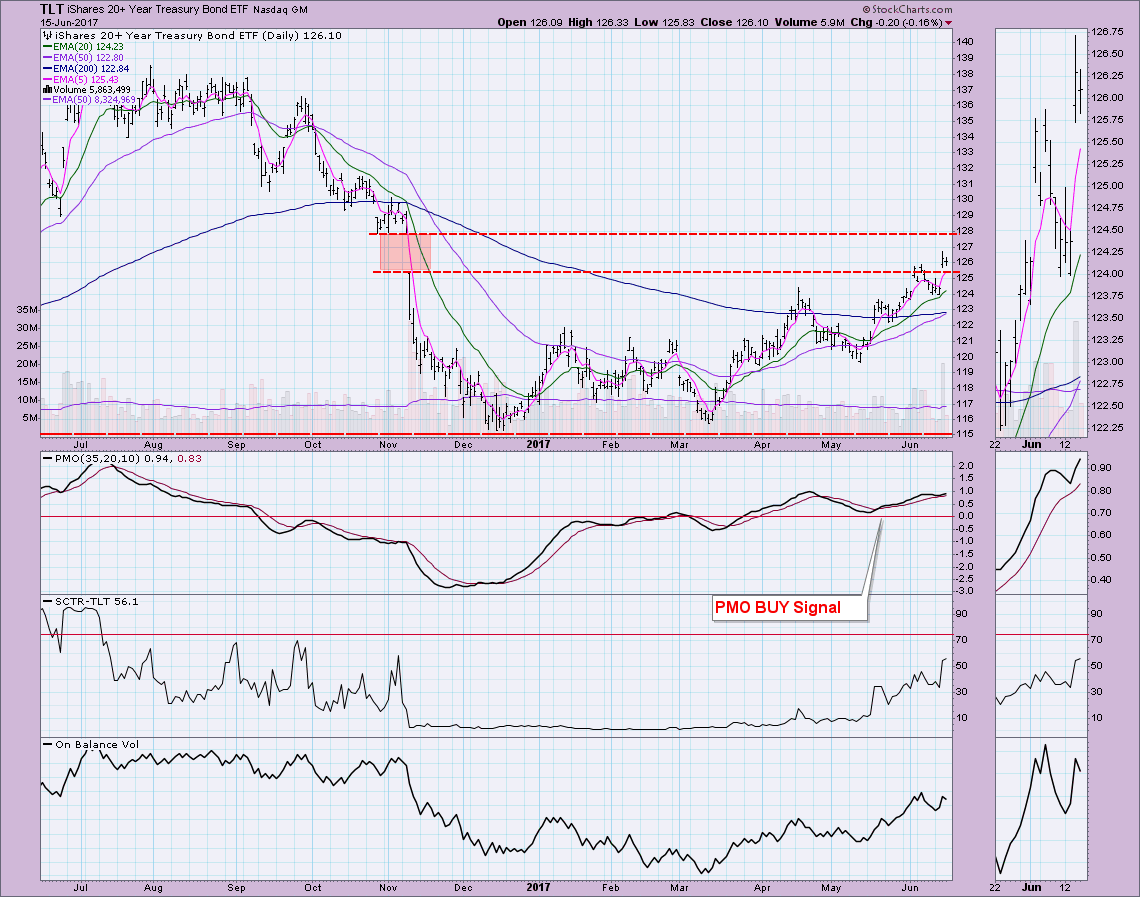