The S&P 500 triggered a new PMO SELL signal yesterday at the close. Today, the S&P 100 joined in with its own PMO SELL signal. At this point, the Dow is the only one holding onto a PMO BUY signal, but a quick peek at the chart and we can see the PMO has topped and is heading down. 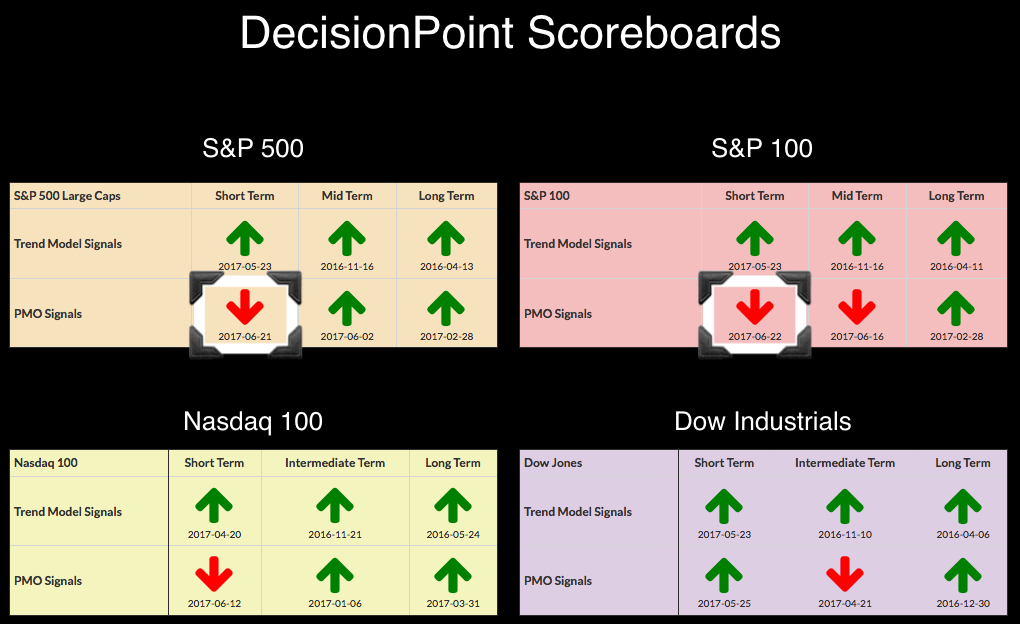 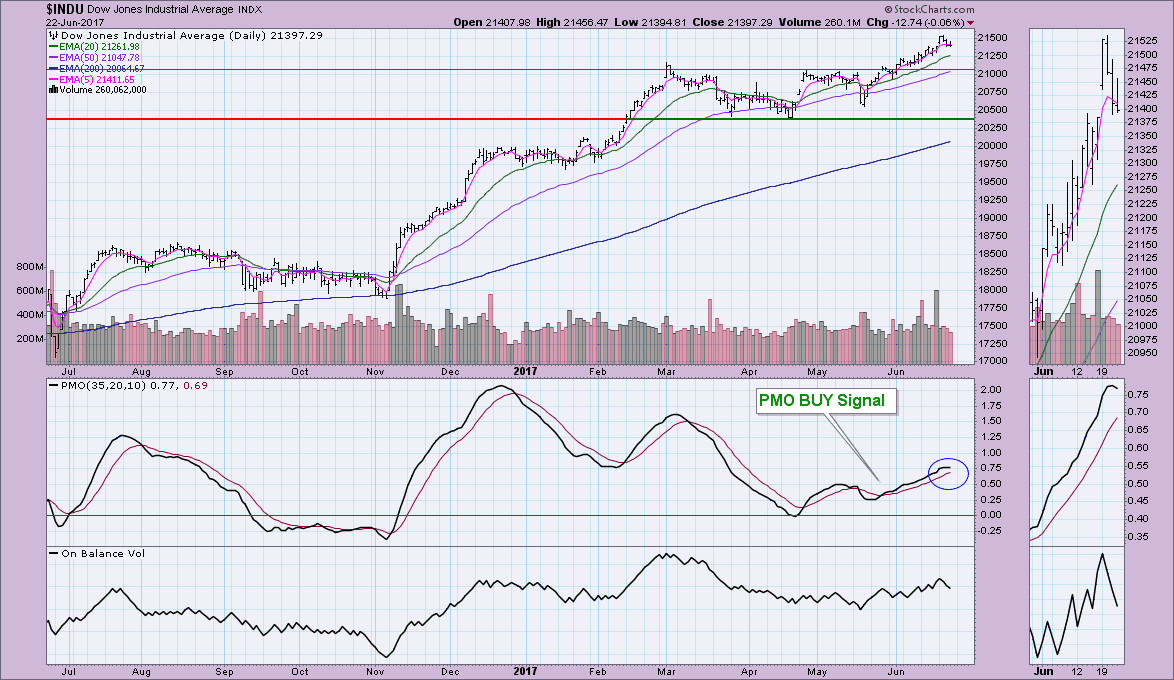 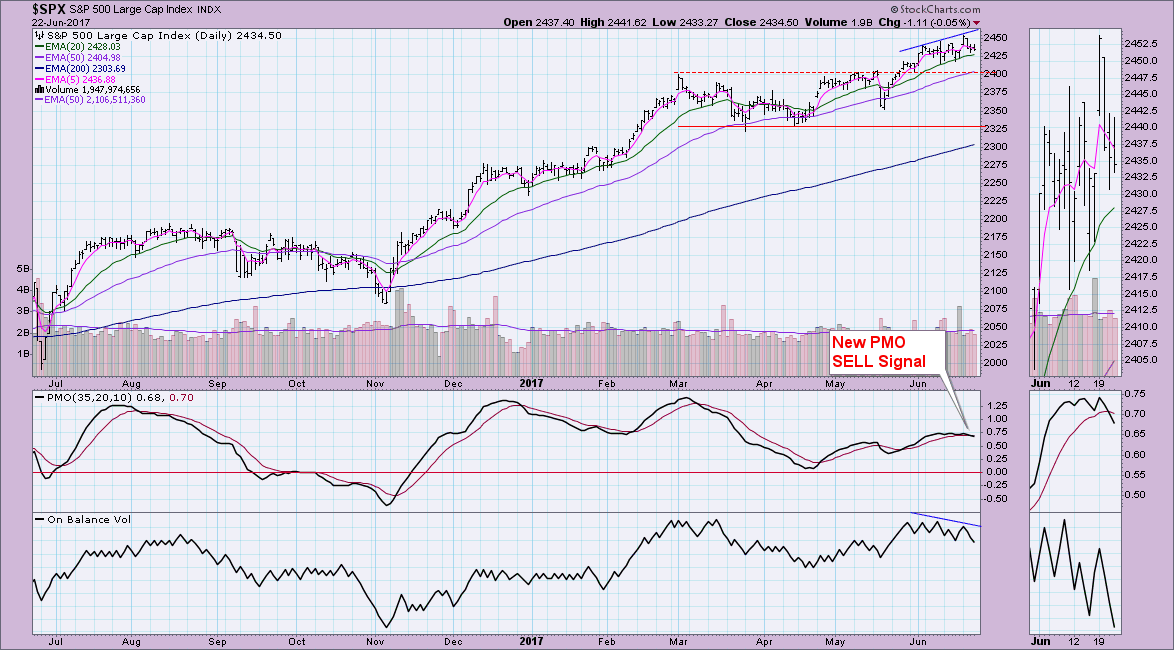 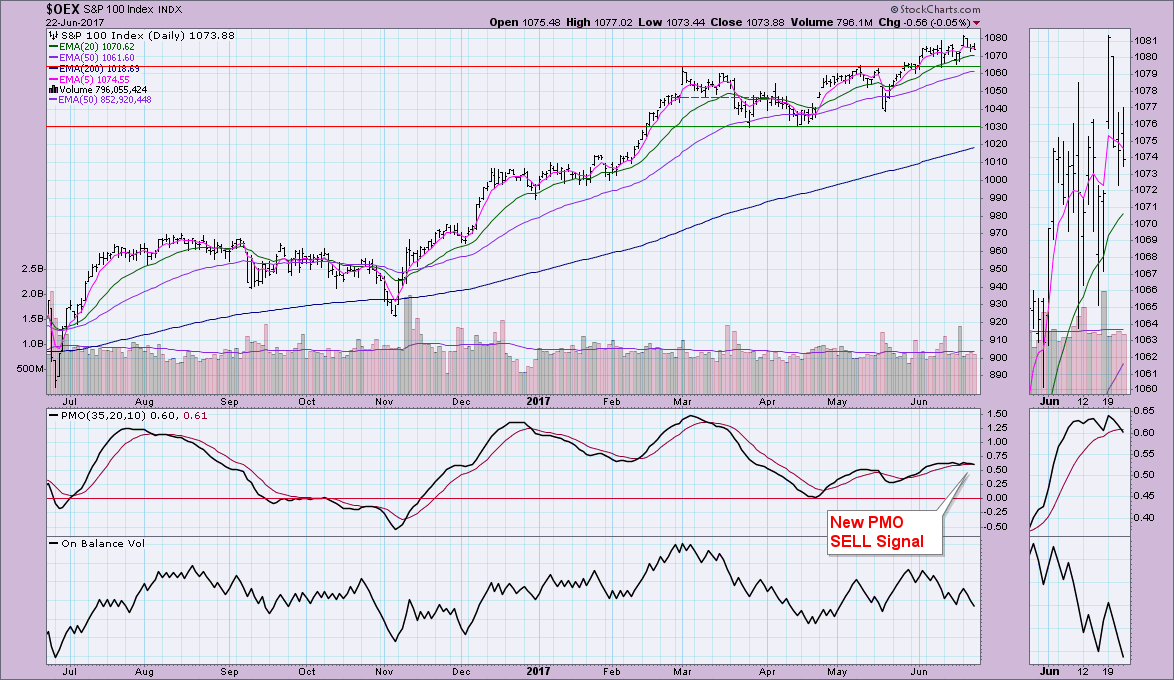 The declining trend channel looked as if it would stay intact this morning, but price did rally enough to breakout. Unfortunately, by the end of the day, it was back in negative territory, making a move down toward the declining tops line that formed the top of the channel.

I've annotated the new PMO SELL signal. Note also that we have a clear negative divergence between the OBV and price tops. The SCTR remains healthy which is why I am looking for more sideways movement or even possibly a pullback of some sort. The SCTR tells us that there is still internal and relative strength within the SPY so I'm not looking for a correction past $240. 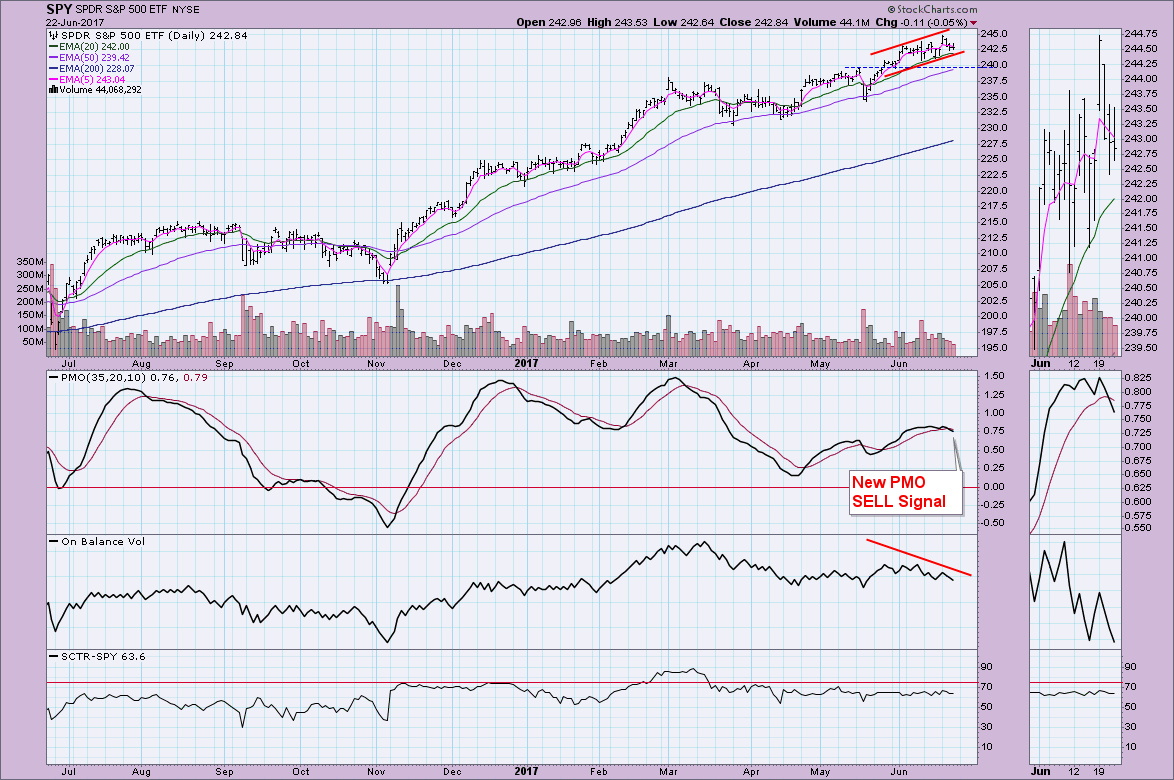 Ultra-Short-Term Indicators: Not much to say here except to note that negative breadth is declining as price moves lower. This is actually bullish for the next few days. 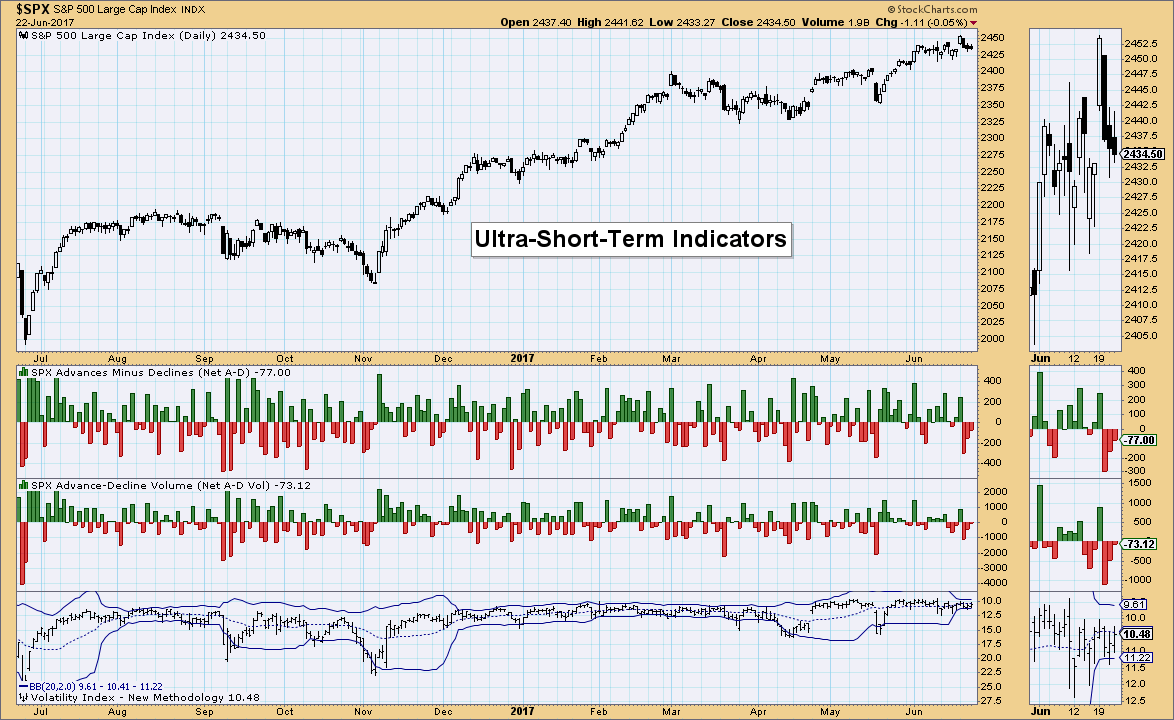 Short-Term Indicators: Good news here is that the STO-V has turned up. It's only tick up, so I'm not going to get really excited, but it is an improvement. These indicators are now in somewhat near-term oversold territory, so a turn back up here would still give us plenty of upside to support a rally. For now, they are in a declining trend and suggest more consolidation or some downside movement. 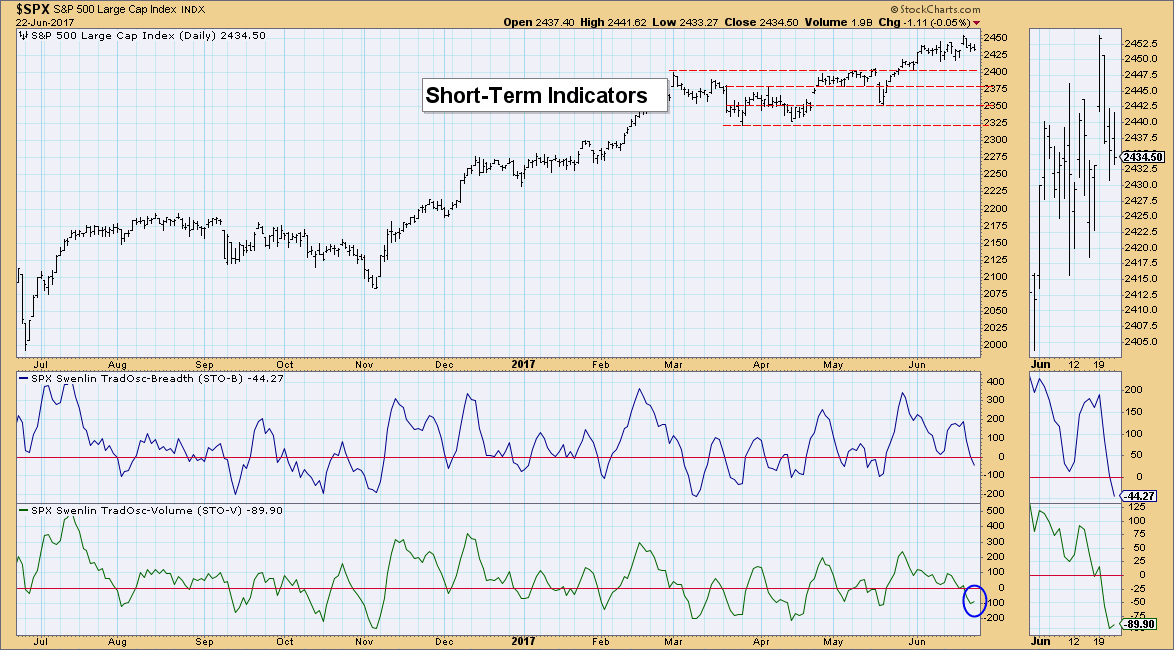 Intermediate-Term Indicators: These indicators have the bastion of hope for a continued rally higher, but they have topped and are negative in my opinion. I've held off judgement, but two negative crossovers are hard to ignore. Realizing that the market is still relatively strong, I'm not expecting a serious decline just yet. Remember the short-term indicators are thinking about getting bullish. 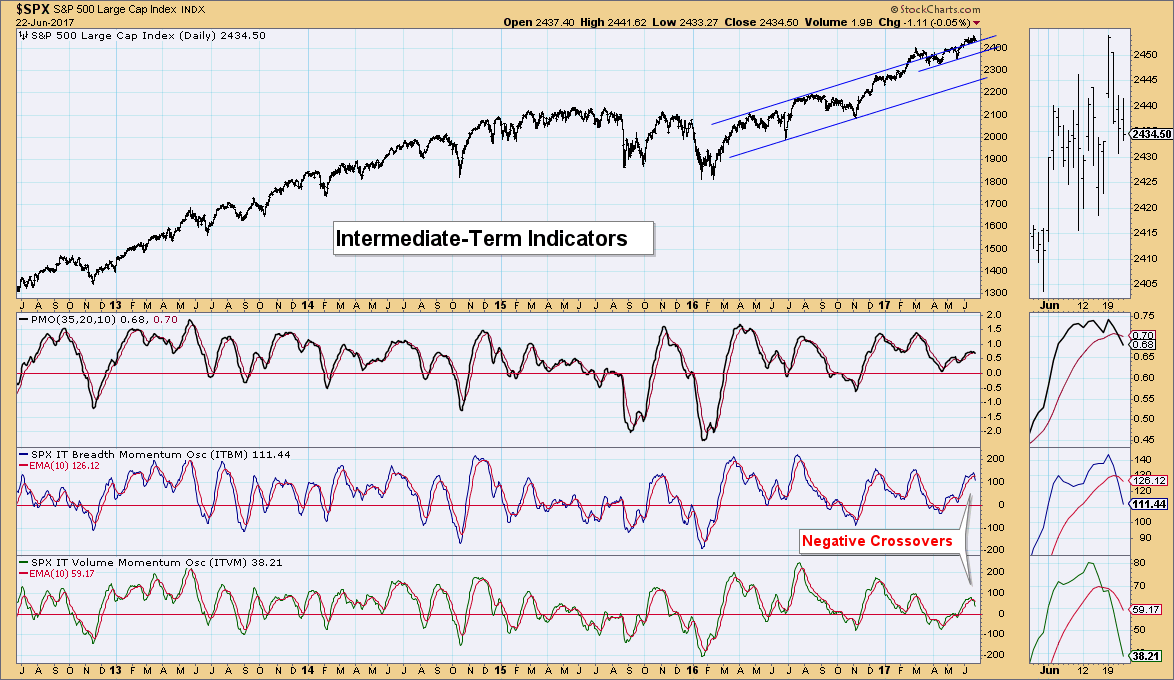 Conclusion: Indicators are somewhat mixed. Breadth seems to suggest this decline is ready to subside already and short-term indicators are considering bottoming in somewhat oversold territory. However, the intermediate term is a concern. If the market would cool, I would be looking for a correction, but it simply has not. It will pullback somewhat and travel sideways and that, has helped indicators unwind back to oversold territory. So despite bearish intermediate-term indicators, I am still not yet looking for a serious correction. A pullback and some consolidation around $240 for the SPY seems about right.

UUP is slowly rallying off support at $24.90. The PMO is rising strongly and the SCTR is in a very slow rising trend. Volume needs to start getting that OBV to rise. In the meantime, a slow crawl higher seems the plan. The 50-EMA is the first area of overhead resistance UUP would face. 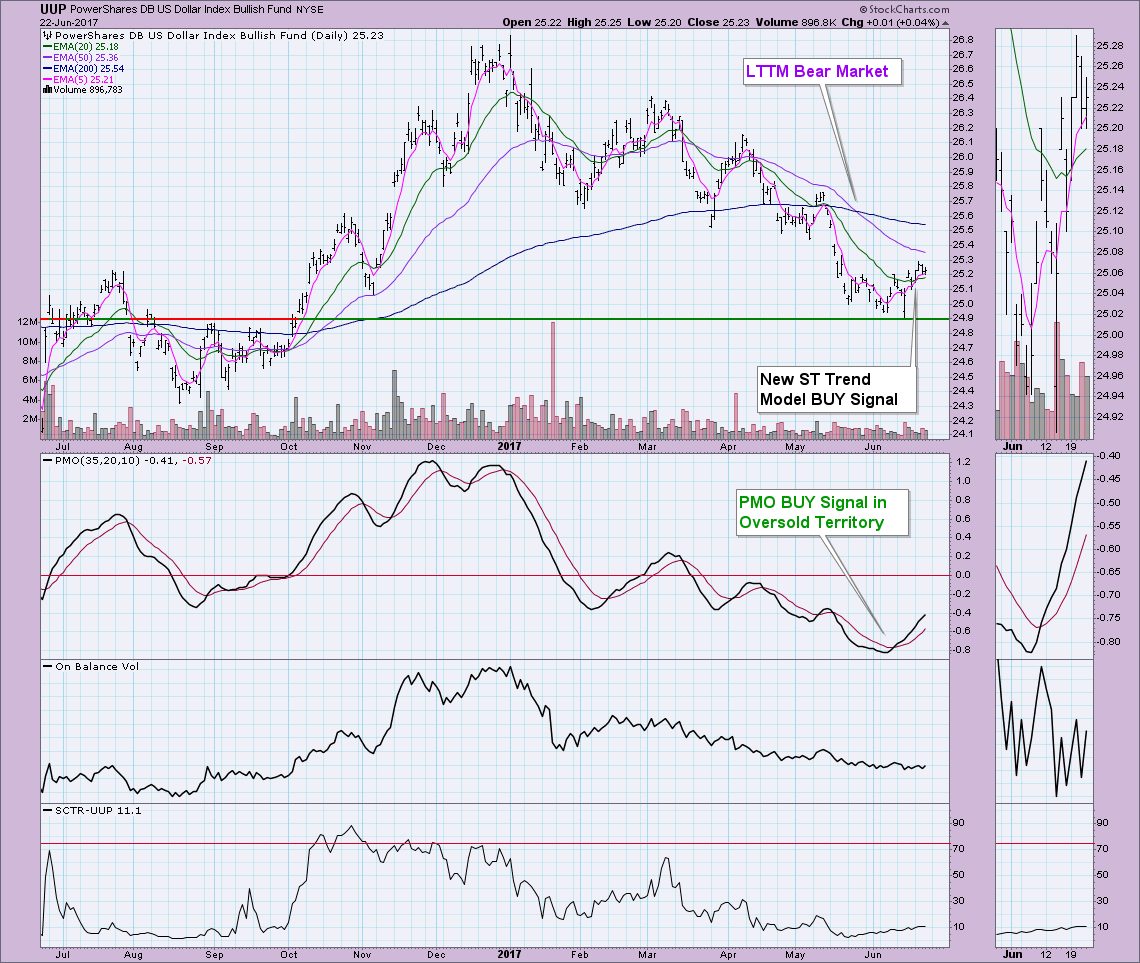 After a steady decline, Gold rallied somewhat today. It's not enough to erase the declining trend, but it could save Gold from a LT Trend Model SELL signal. With price above the 200-EMA a negative 50/200-EMA crossover isn't possible. Unfortunately with indicators looking so negative, I do expect this decline to continue to at least the rising bottoms trendline, but I think a drop to test the double-top neckline is highly likely. 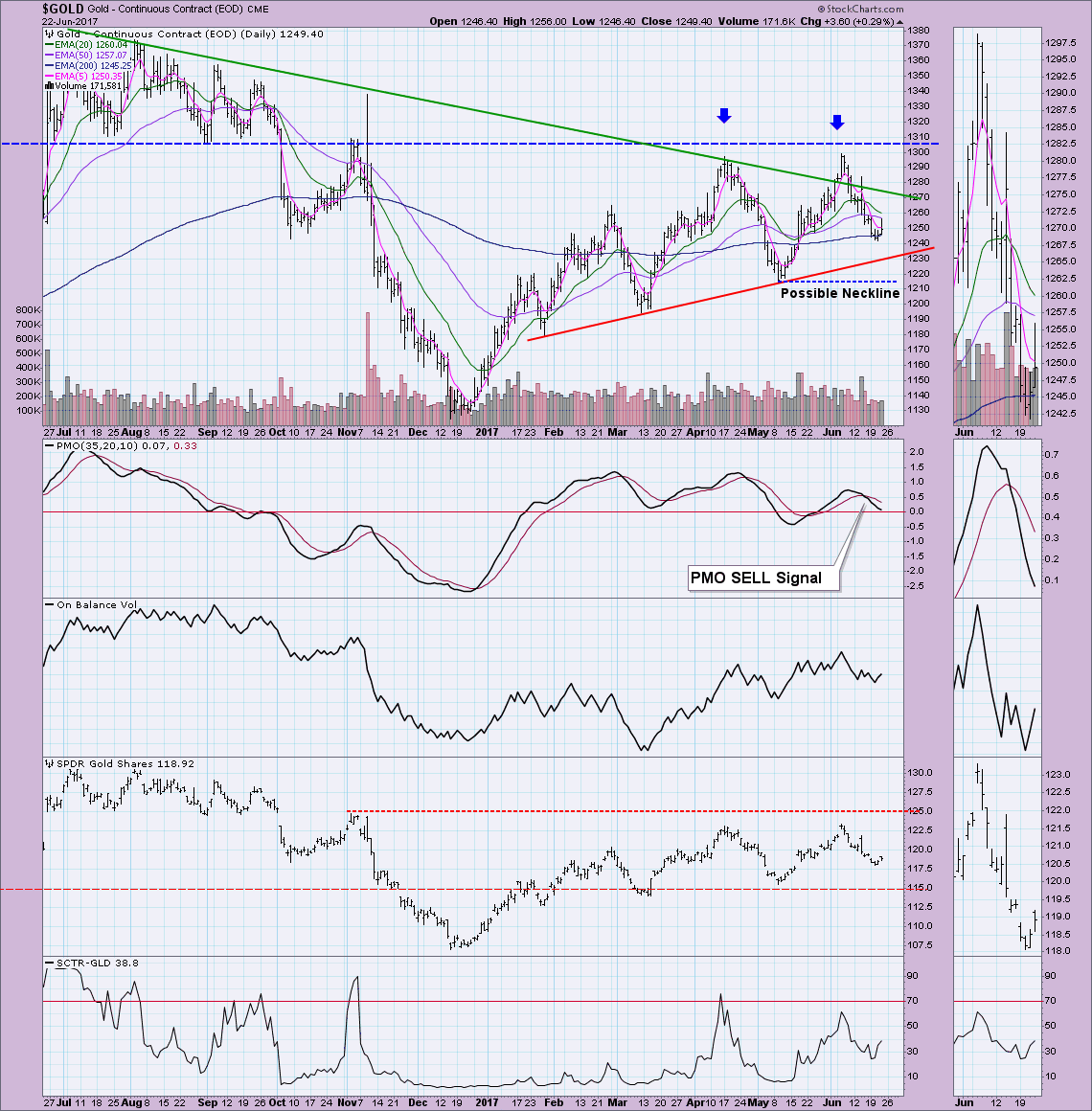 Everyone has been waiting for a bottom on USO to get in, but indicators have never wavered in their bearishness. Oil may have found a bottom at $43/barrel, but with supply so high, there is a real possibility Oil will end up testing support at $39. This is like trying to catch not a "falling knife" but a "falling ax" when comes to USO as the declines have been especially painful on a vehicle that trades below $12/share. I don't think the bottom is here just yet. 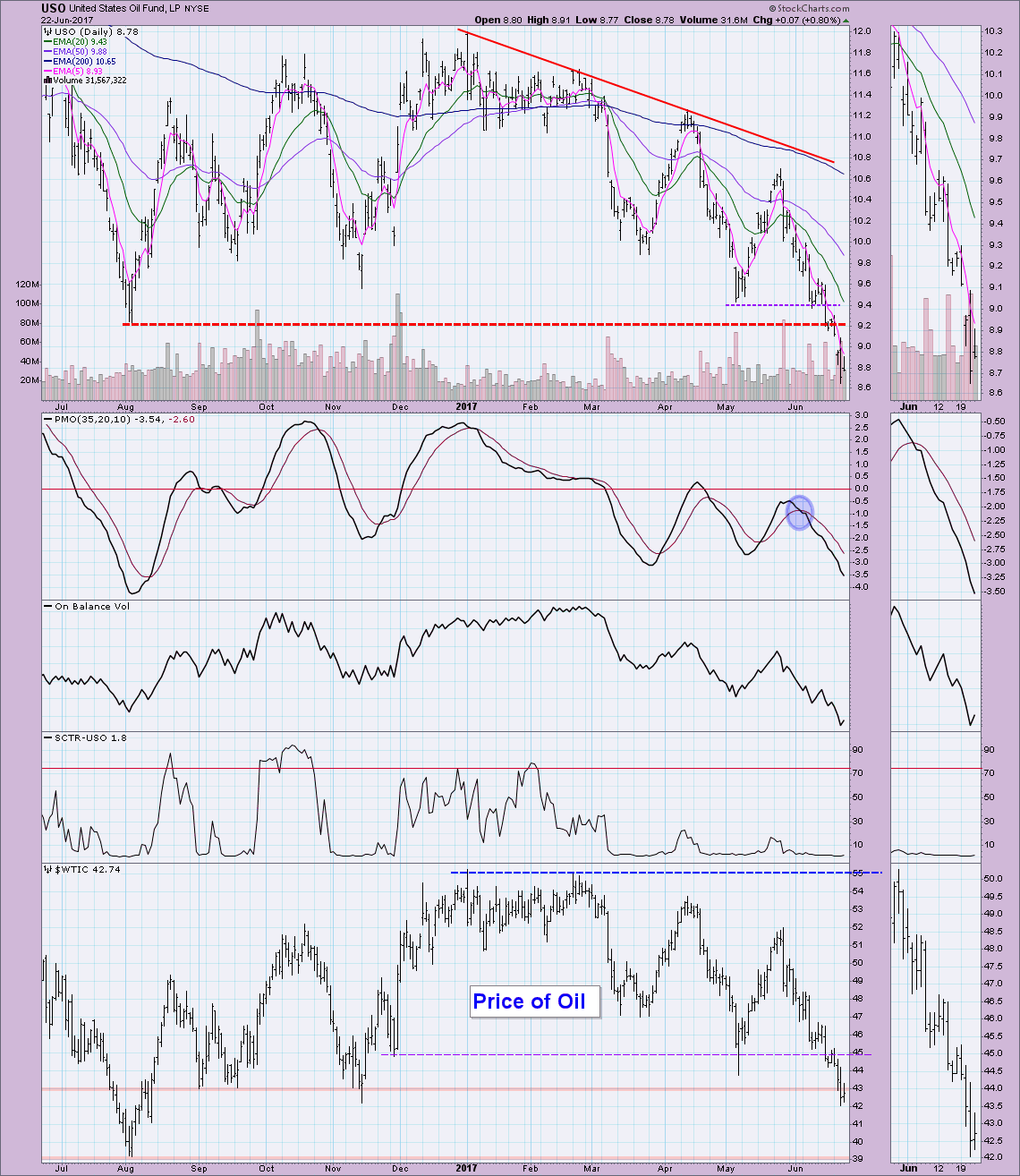 TLT finally is closing the gap at the $128 level. Indicators are all bullish and with the gap closing, it suggests higher prices. The curiosity will be how well it is able to rally with the Fed raising interest rates and the likely rise in yields. Not taking any of that into account, the indicators look fantastic and the closing of the gap with a breakout would be very bullish. 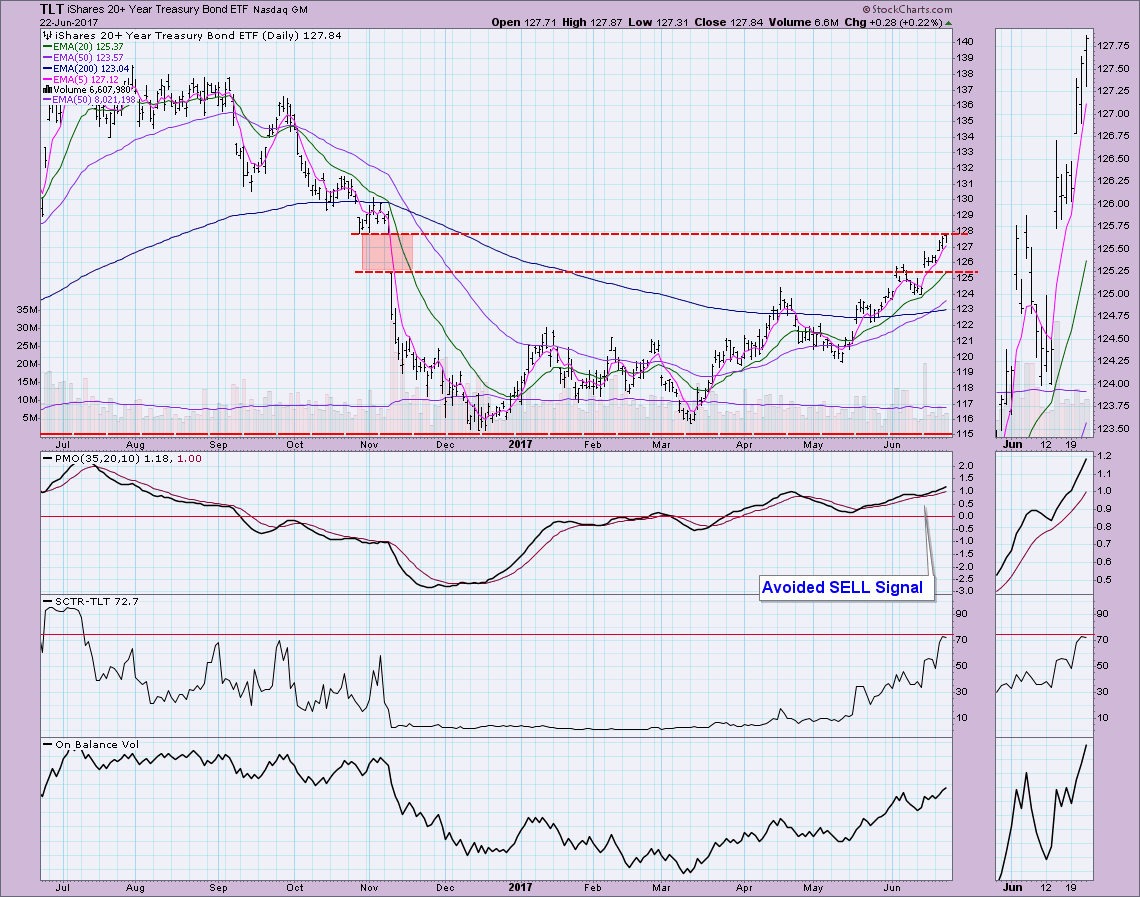