No new signal changes on the DecisionPoint Scoreboards, but we did see three new Intermediate-Term Trend Model (ITTM) Neutral signals generate on three different sectors. Utilities, Consumer Discretionary and Consumer Staples. It's odd to see both Consumer Staples and Discretionary hitting bearish signals, but I think that is a symptom of the rotation of money throughout the various sectors. 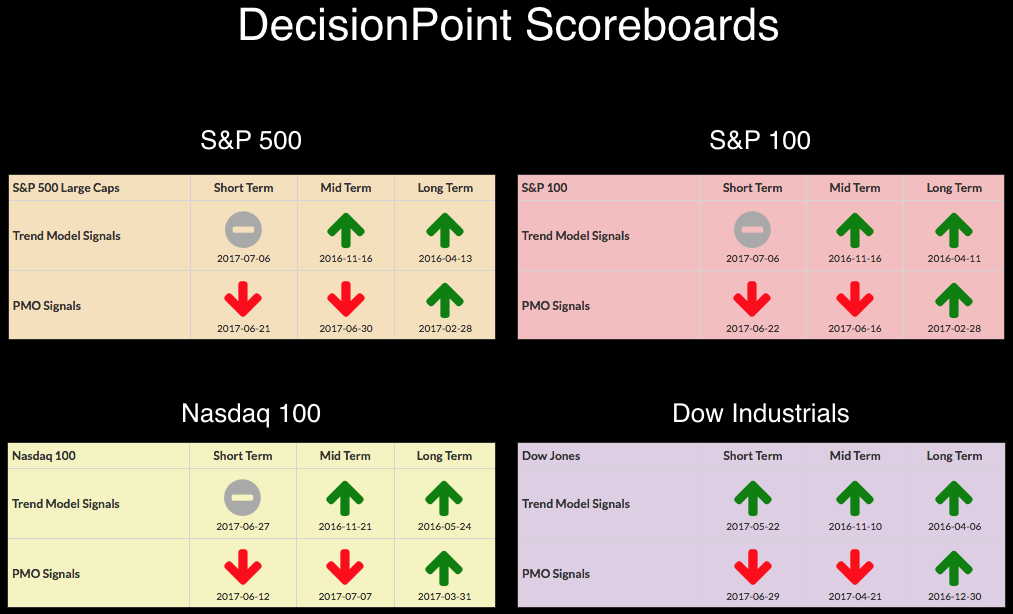 RCD probably has the most opportunity to wiggle its way out of this Neutral signal. The 20-EMA is very close to the 50-EMA, so another crossover is certainly possible. However, I like that price is now at very strong support and I see a positive divergence between OBV bottoms and price bottoms. 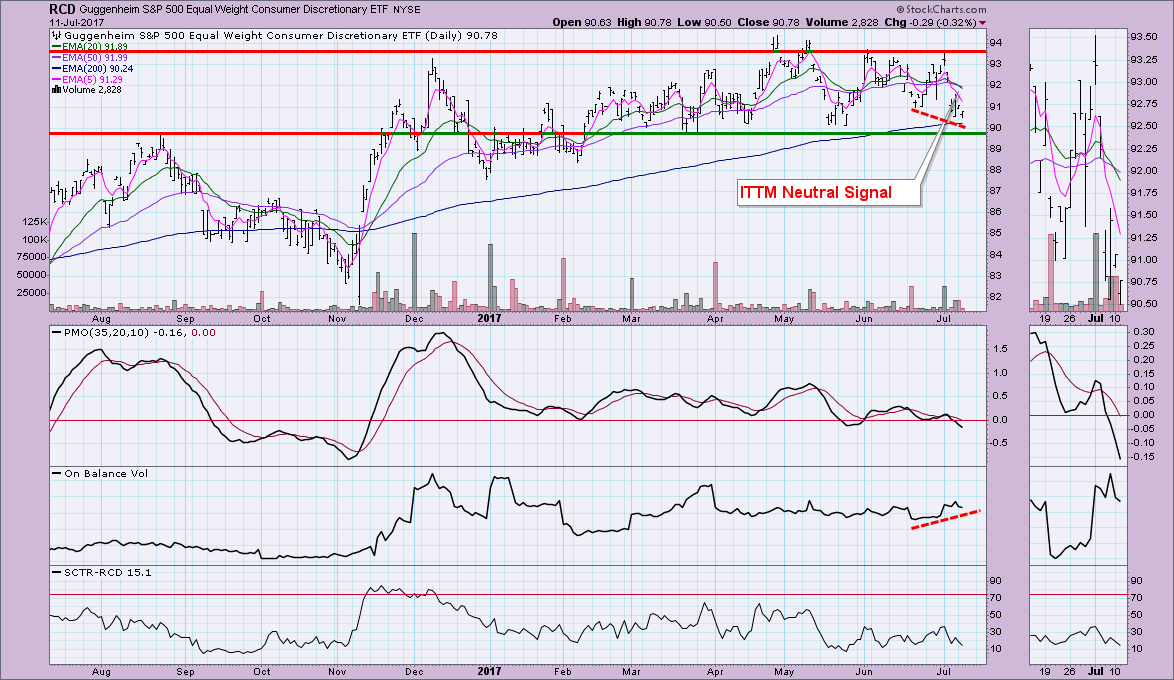 Neither RYU or XLP look favorable. At least RYU is nearing important support that could possibly hold. You can see the negative 20/50-EMA crossover that generated the ITTM Neutral signal. 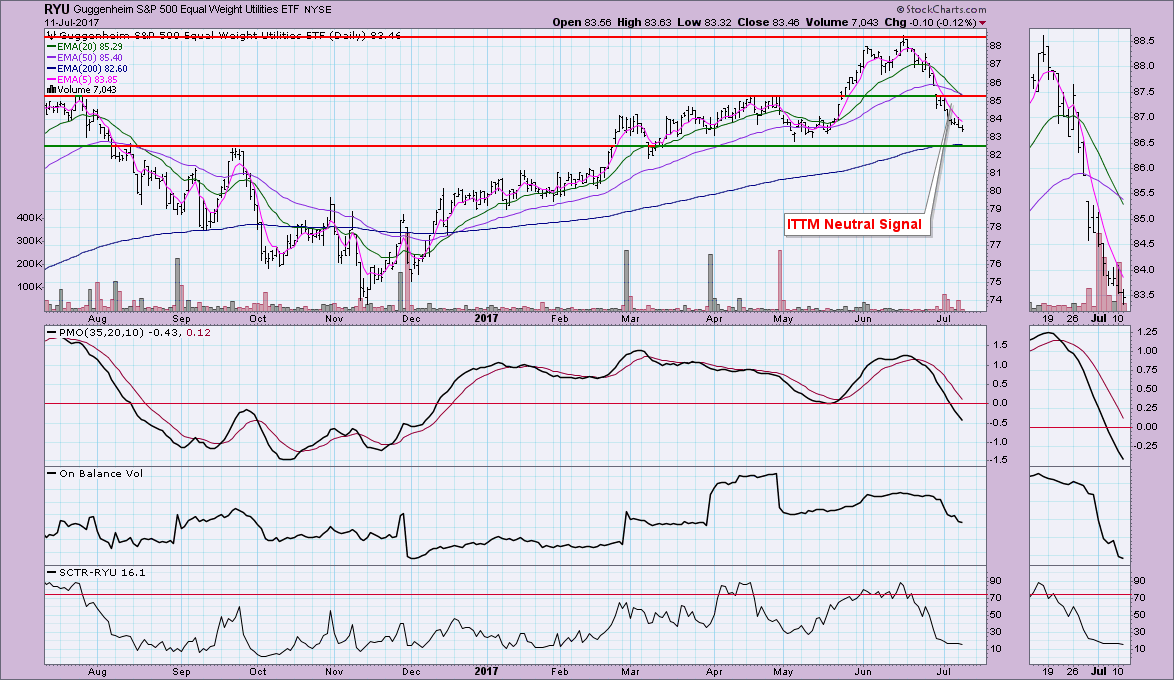 Like RYU, there's nothing very positive about this chart. It appears that strong support at $54 is about to be broken. The indicators are all very negative. 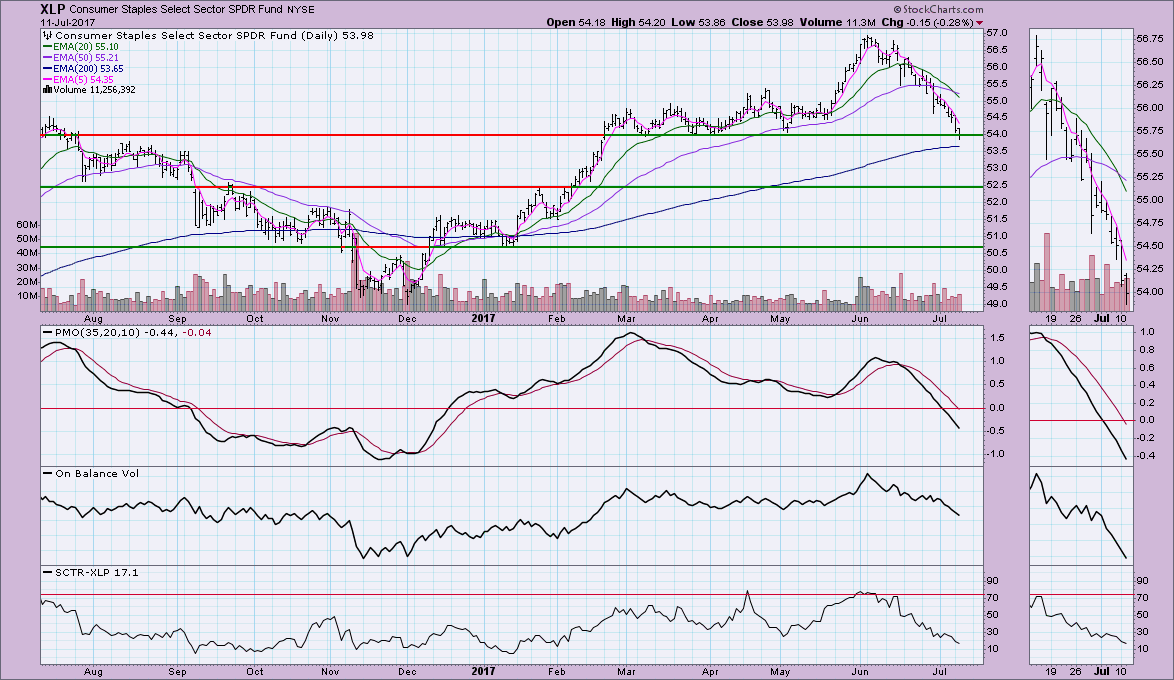 There is a rounded top on the SPY right now that suggests we will see support at $240 broken. The PMO has now traveled past its previous bottom which will set up a negative divergence when it turns back up. 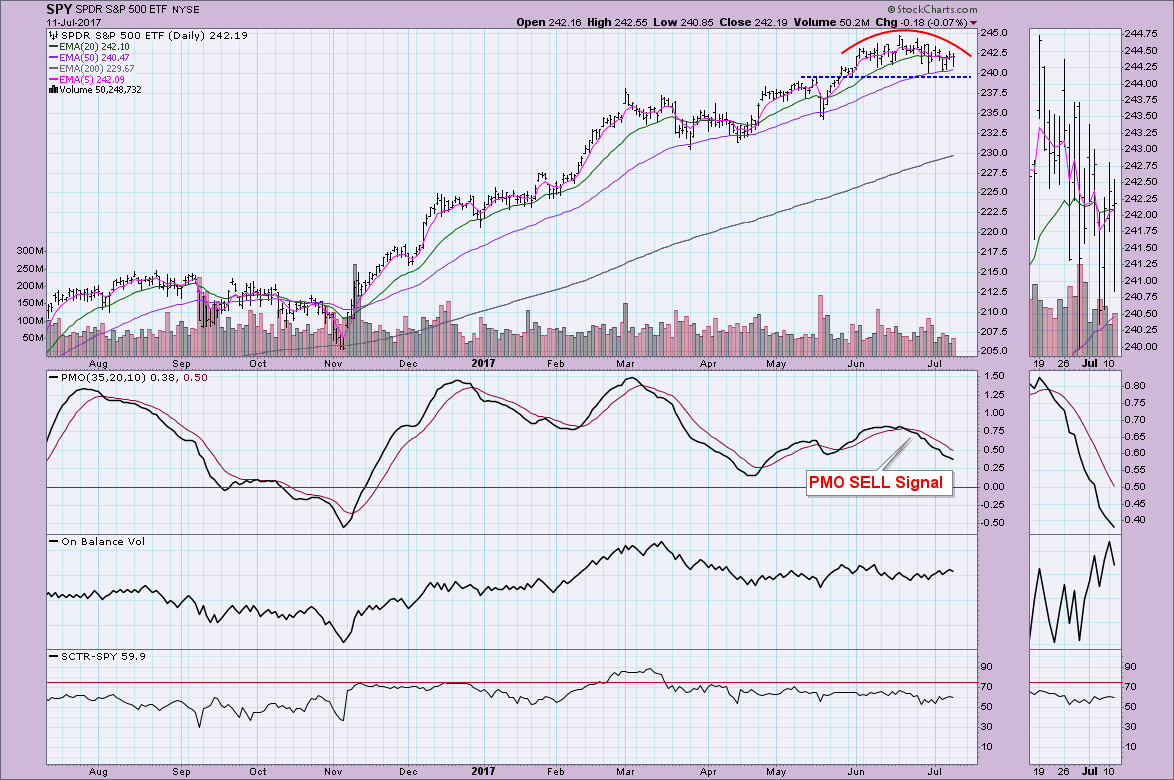 Ultra-Short-Term Indicators: No climactic readings to talk about, although the VIX did penetrate the lower Bollinger Band intraday which could speak to higher prices for part of tomorrow's trading. What we want to see is comparable climactic breadth readings like we had last Thursday. Since we don't see that, I don't think we will see a sustained bounce. 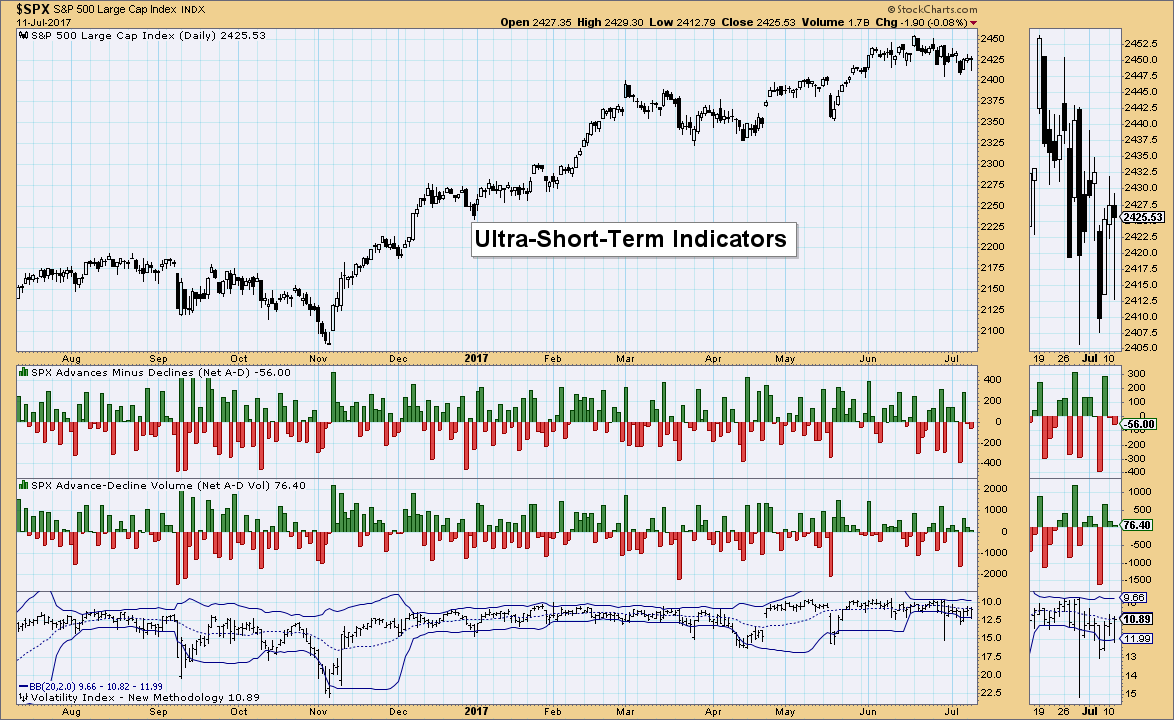 Short-Term Indicators: The market is consolidating so the short-term indicators are replicating that as they wiggle and twitch sideways. We've seen in mid-April and mid-May similar consolidation which concluded with a rally. They're pointed down right now, so I wouldn't be looking for much of a rally just yet. 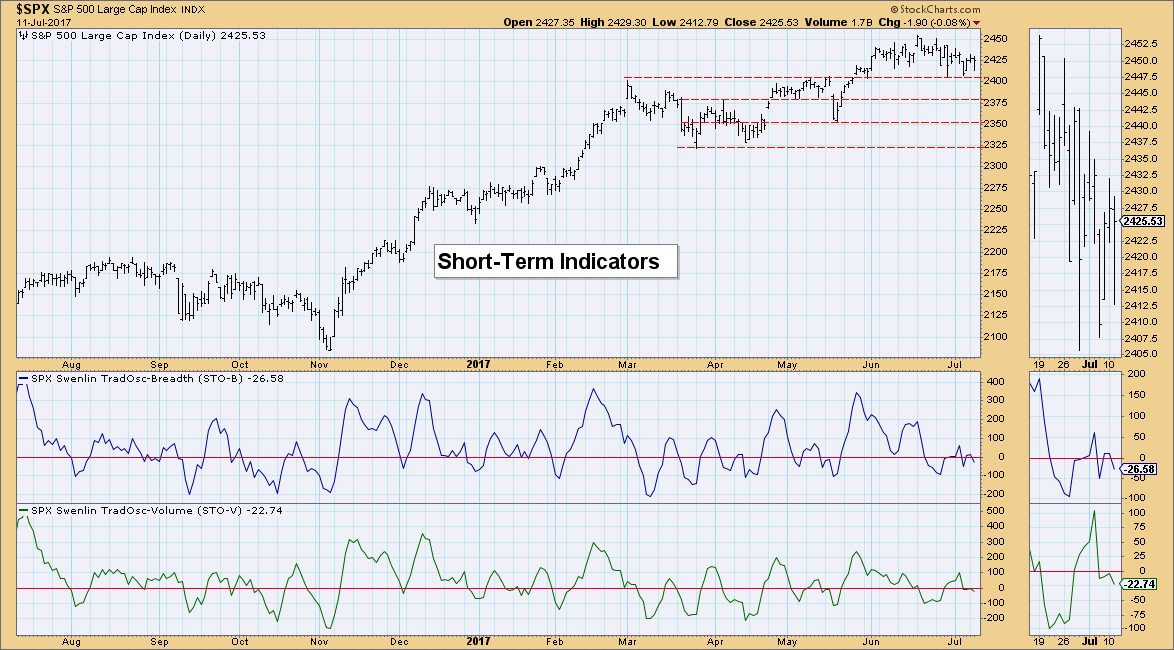 Intermediate-Term Indicators: Although the ITVM is trying to turn up, the overall trend is down. I suspect it will continue to fall until we see readings reach somewhat oversold territory. Until then, I view these as bearish. 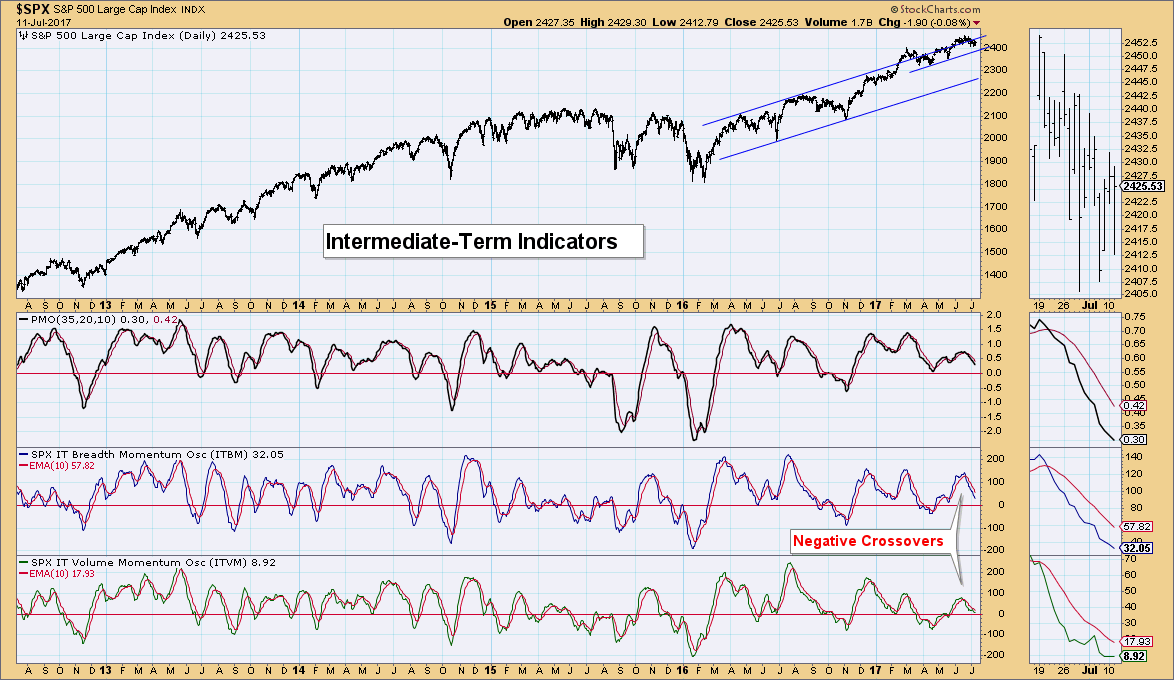 The Dollar started to mostly consolidate after its difficult journey at the end of June. Unfortunately, I see that as a possible bearish reverse flag formation. The minimum downside target would take price at least to support at $24.30. Given the negative indicators, I would say that support has not yet arrived for UUP. 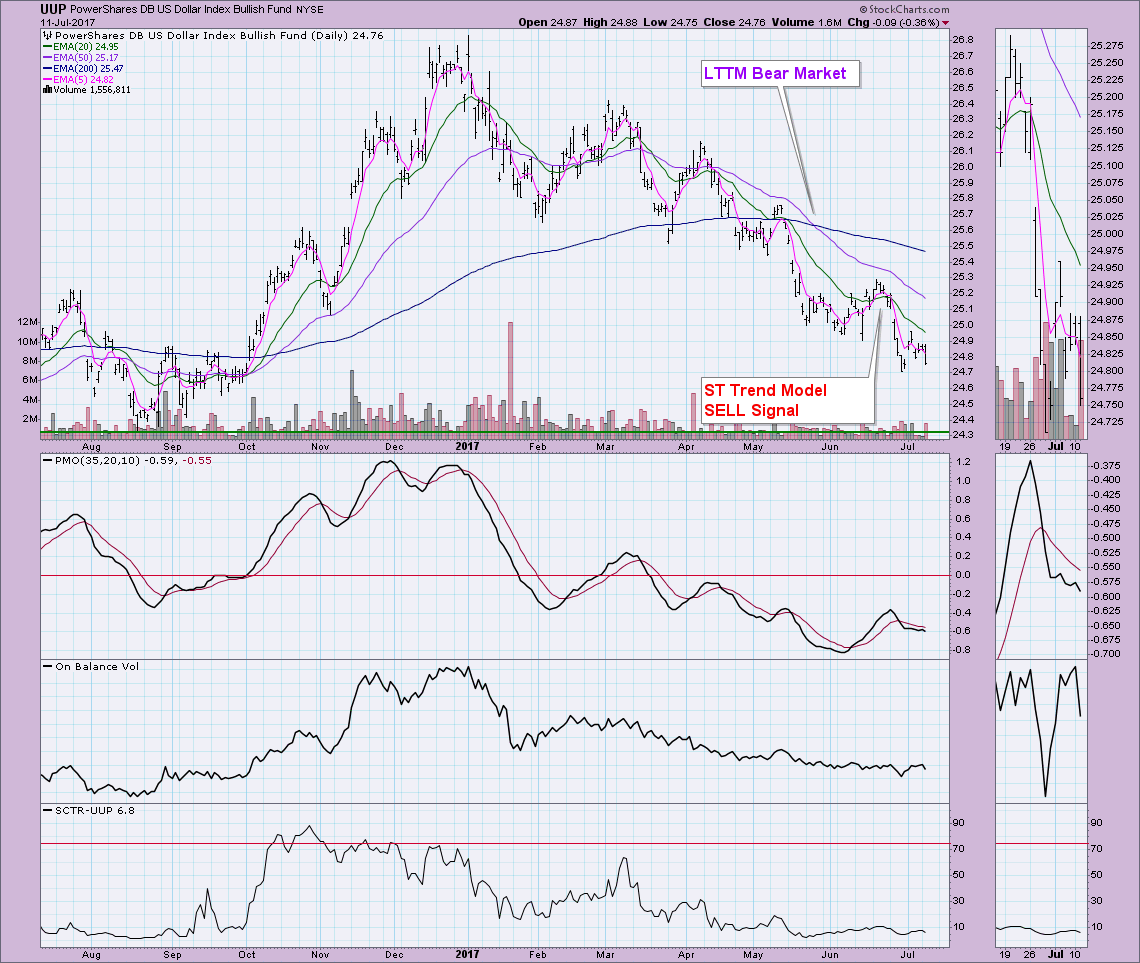 The double-top neckline has been penetrated, but it appears that Gold wants to bottom here, not continue lower. In the thumbnail, you can make out a positive divergence between the last two OBV bottoms and price bottoms. The PMO and SCTR are bearish, so I doubt that support is going to hold here. 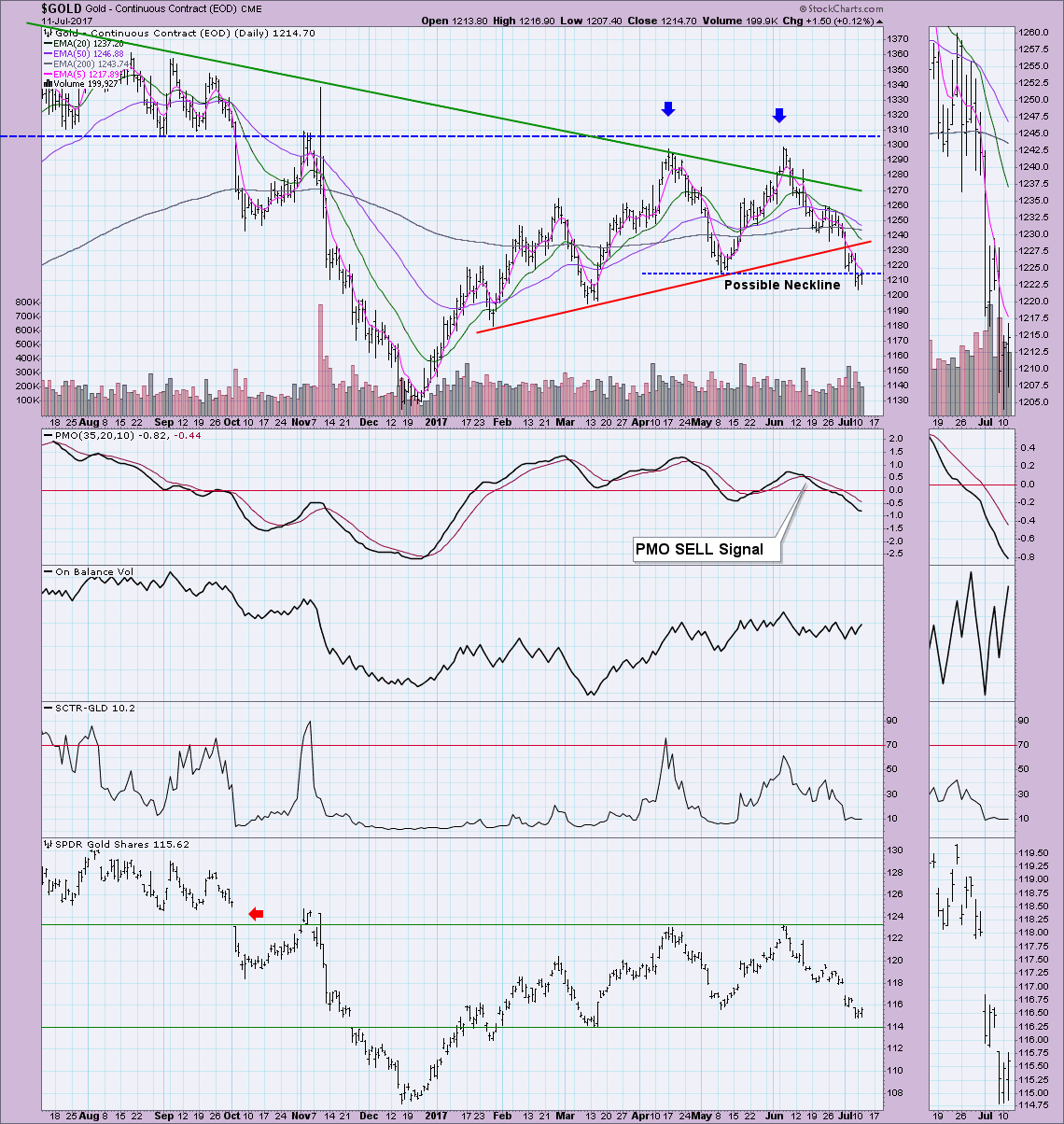 USO has been very volatile and I don't think it is over yet. It put in a bottom at $8.60. What's frustrating is that price keeps breaking slightly above resistance and then it falls apart. Right now $9.00 is forming support and $9.60 is overhead resistance. The PMO looks good, I'd just like to see volume patterns with the OBV improve. 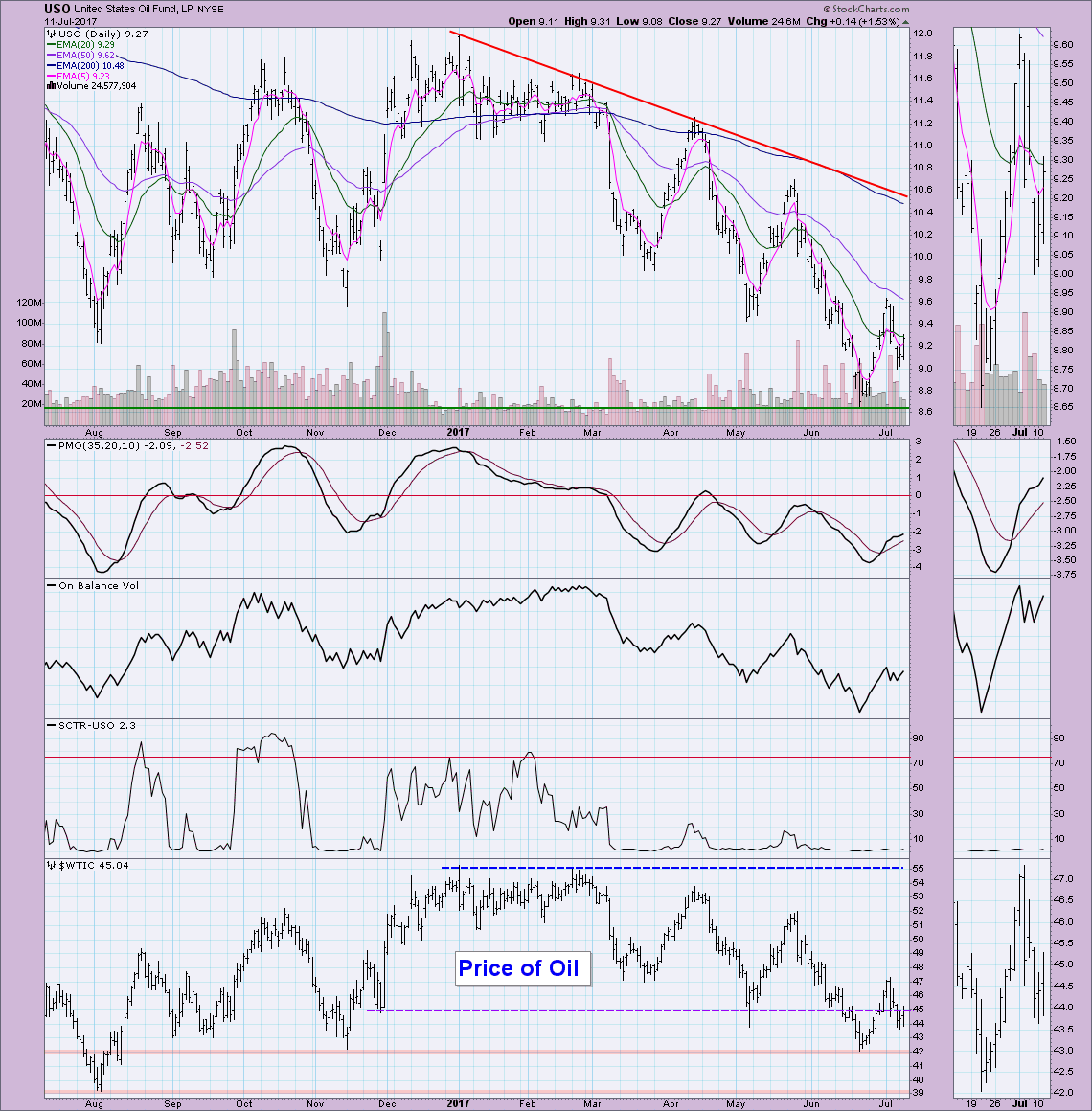 TLT is pausing just above support at $121.50. Given the ugly indicators, I have to say this support level will likely collapse. The next area of short-term support would be at the March low around $119. Unfortunately, I think we will see it drop down to the $115 level next. 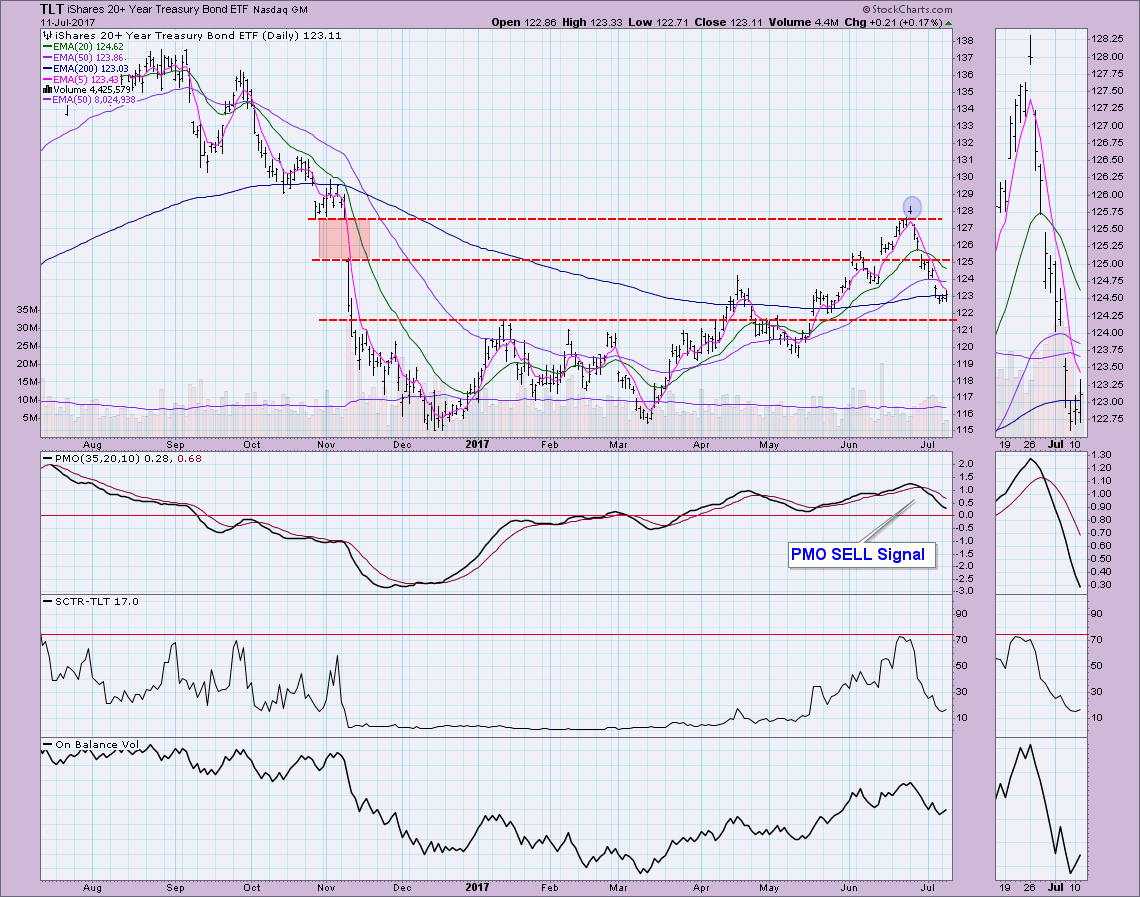