Last week I wrote: "I would like for the correction to continue for a while, but honestly, we may have just hit bottom." Well, the market did make a bottom, but it was just for a short bounce prior to this week's failed retest of last week's low. It was not the enduring intermediate-term bottom I had imagined, and it may be a while before we see that. As I watched decelerating price movement on Tuesday and Wednesday, it became apparent that a retest was more likely than an upside breakout. Similar to last week, this Friday was a day of rest to digest Thursday's collapse and to process options expiration. 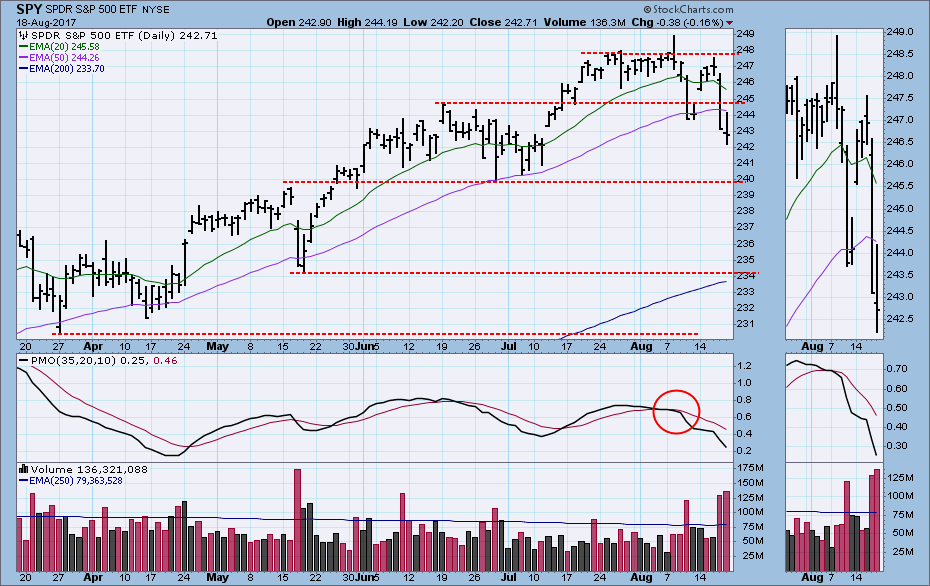 The most compelling change to this daily chart since last week is the break below the rising bottoms line going back to December. This is far from being a decisive break, but it is significant in its singularity. The next horizontal support is SPY 240 (SPX 2405). Just below that is the cyclical bull market rising trend line. As long as that line holds, my opinion would be that no serious technical damage had been done. 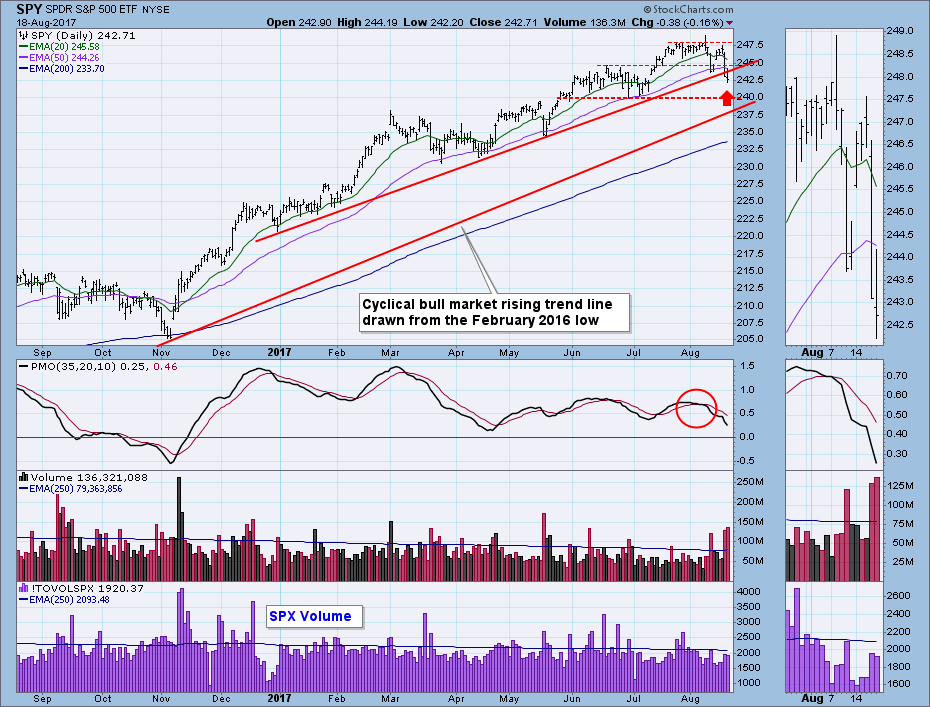 On the weekly chart price remains within the rising trend channel, but the stress of the correction has caused the weekly PMO to drop below the tight horizontal pattern it has held for at least four months. 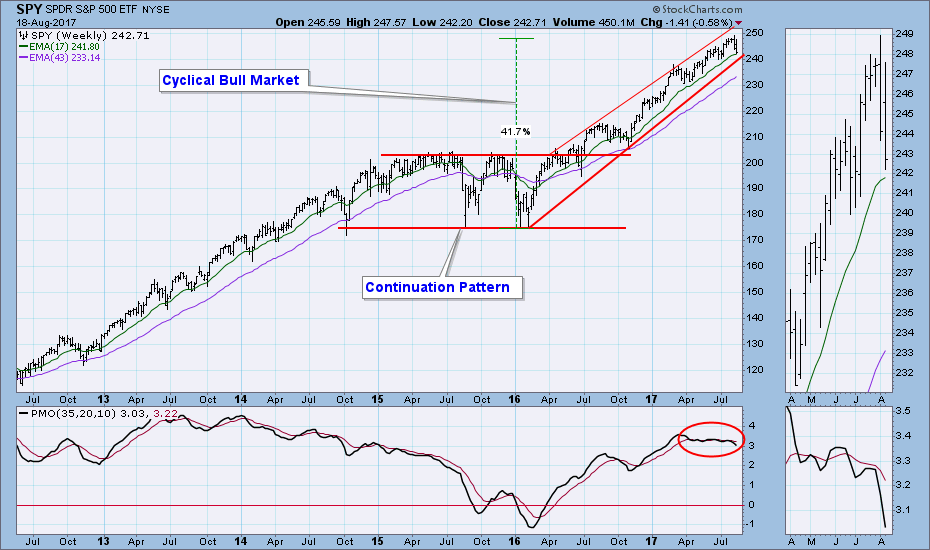 Climactic Market Indicators: There was a downside climax last Thursday that resulted in the short price bounce this week. This week there was a more severe downside climax on Thursday, and Friday's price action was similar to the prior Friday's. Maybe we'll get another bounce next week, or maybe the decline will continue, but expanding New Lows make me think that a rally to new, all-time highs is not in the cards. 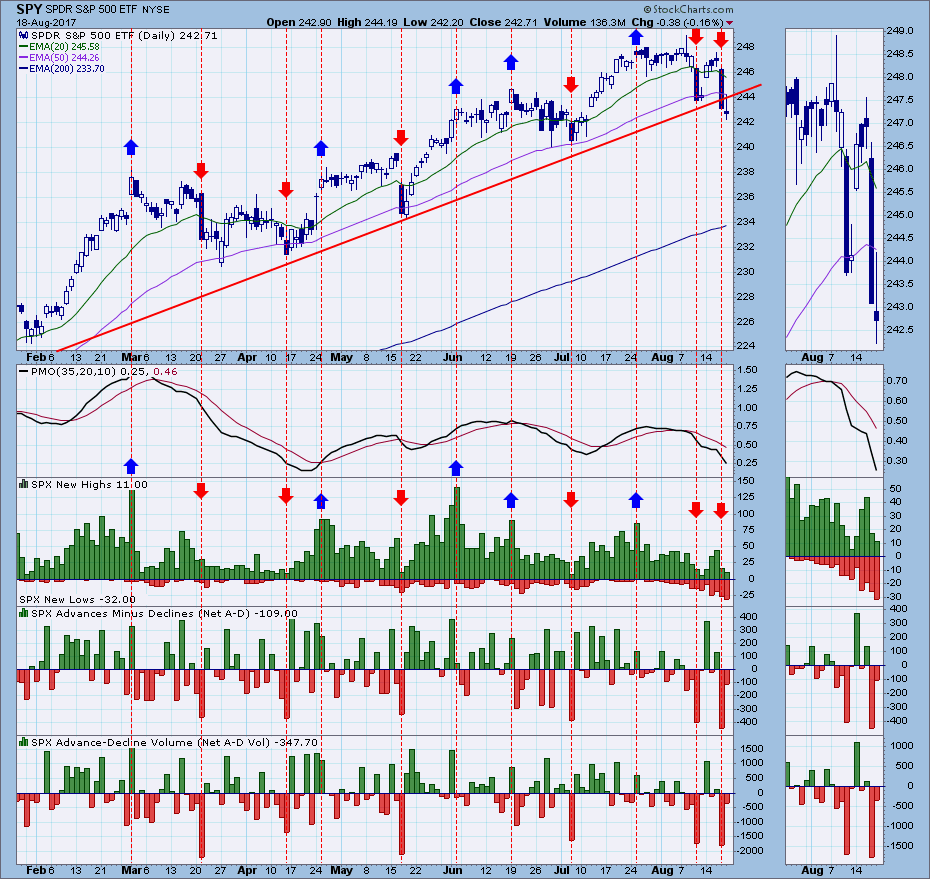 Short-Term Market Indicators: These indicators have topped below the zero line. Very negative. 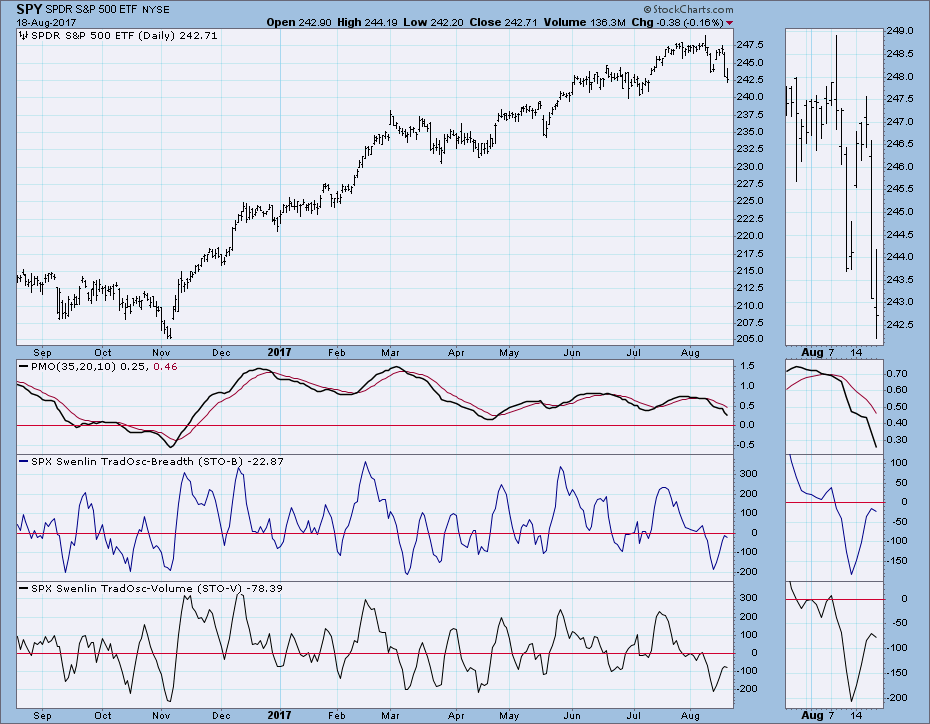 Intermediate-Term Market Indicators: At this point I am less confident that these indicators will find support at the same level as they have for the last 18 months. I am now more interested in potential downside -- about -250 on the ITBM and ITVM scales. That is not necessarily a target, rather it allows for a healthy decline. 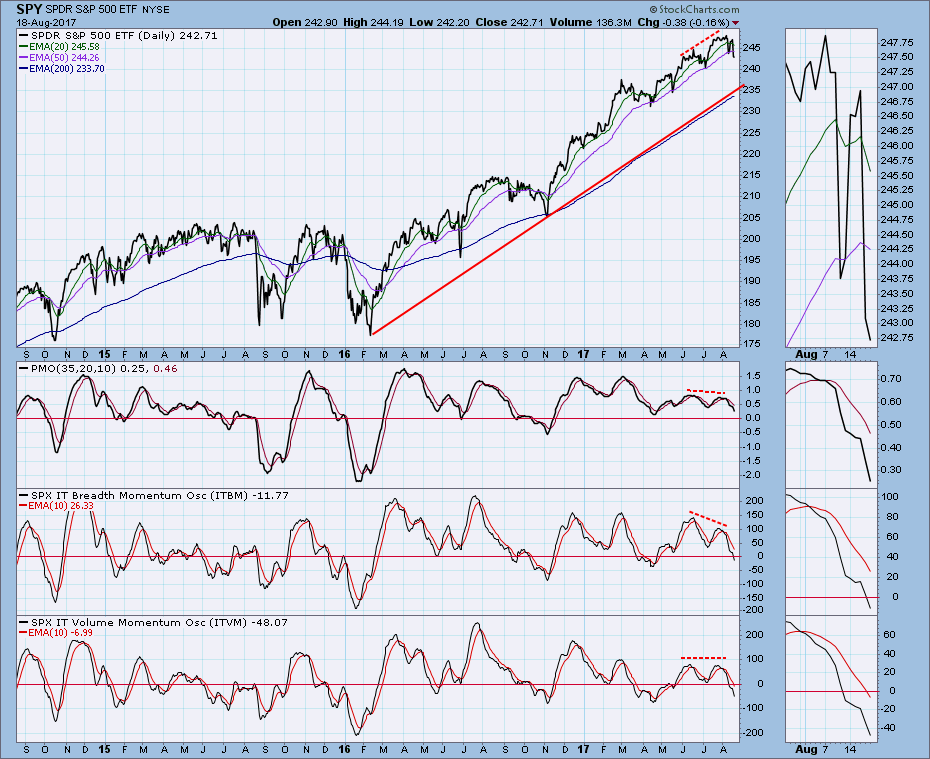 Conclusion: We have had only two days in the last two weeks where there was some enthusiastic selling. It was a nice change, but losses were small. The loss was only -2.7% from the August intraday high to Friday's intraday low, and only about -2.0% from the all-time high close earlier this month to Friday's close. The most encouraging thing for bears would be the fact that price finally broke below the 'Trump Rally' rising bottoms line that goes back to January. This was not a decisive breakdown, but I will be looking for follow through next week. There is still plenty of room for downside correction before the cyclical bull market rising trend line is challenged. If that line is violated, I would be concerned that the bull market was over; however, let's first wait to see if we get there.

UUP has broken above the steepest declining tops line, and a short-term rally has begun. 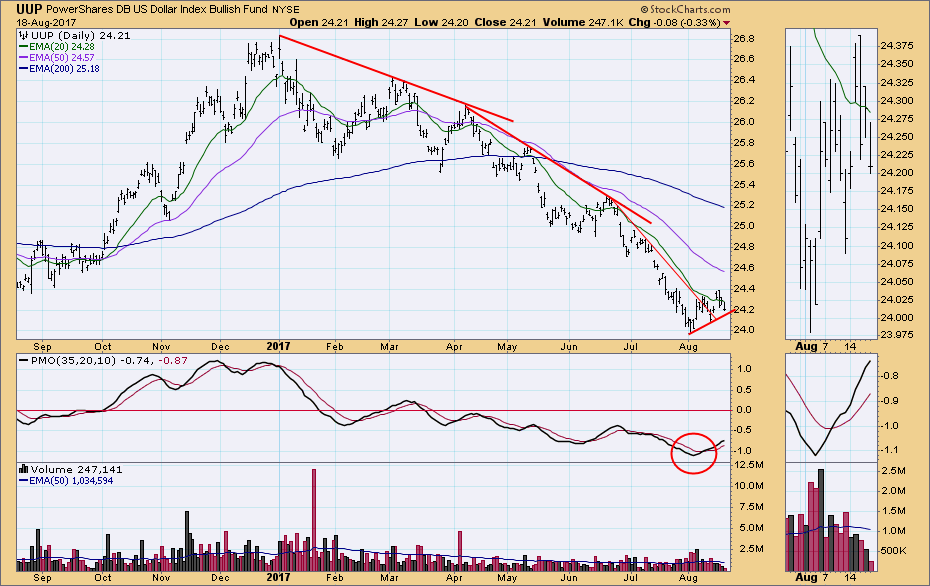 On the weekly chart UUP is currently holding above long-term support drawn across the 2016 low, but the weekly PMO is still falling. 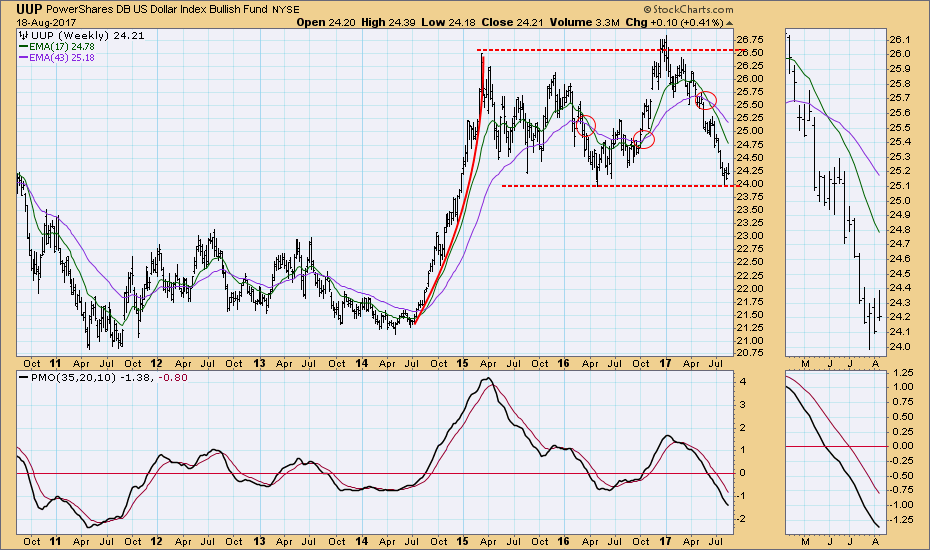 While gold broke down at the beginning of this month, the NoKo crisis helped gold to resume its up trend and moved it to the top of the four-month trading range. Gold broke out of the range on Friday, but still closed below the line. One problem is that sentiment is still bearish, creating a drag on the rally. The daily PMO is overbought, as is price in this time frame. The main obstacle is the dollar, which is firming and may be starting a rally. Gold was barely able to hold its own while the dollar was falling, and it won't be pretty for gold if the dollar rallies. 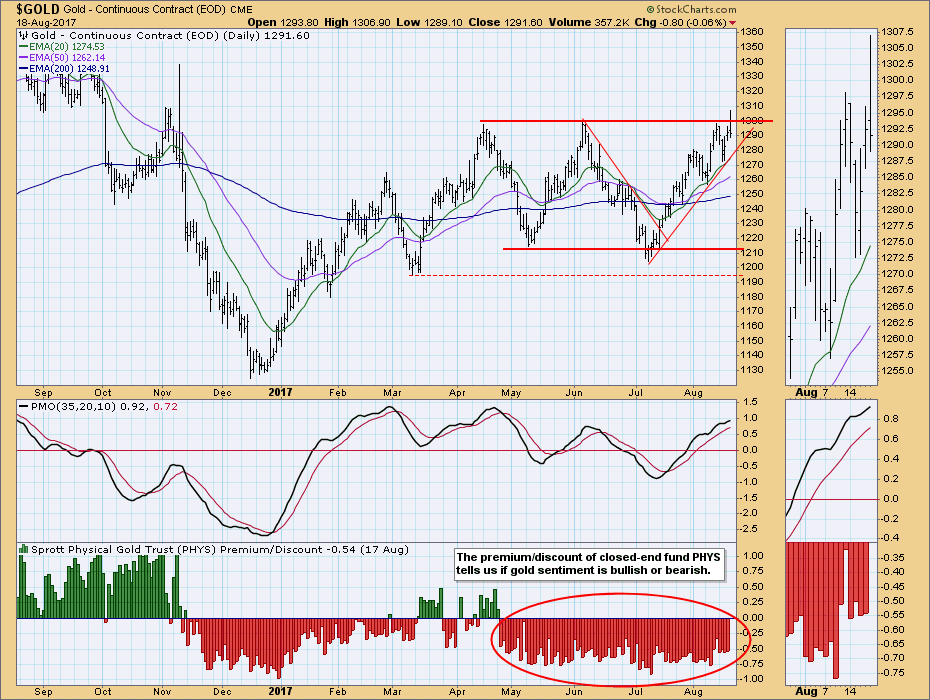 Gold has clearly broken above the bear market declining tops line. The breakout will be considered decisive when price reaches about 1313. 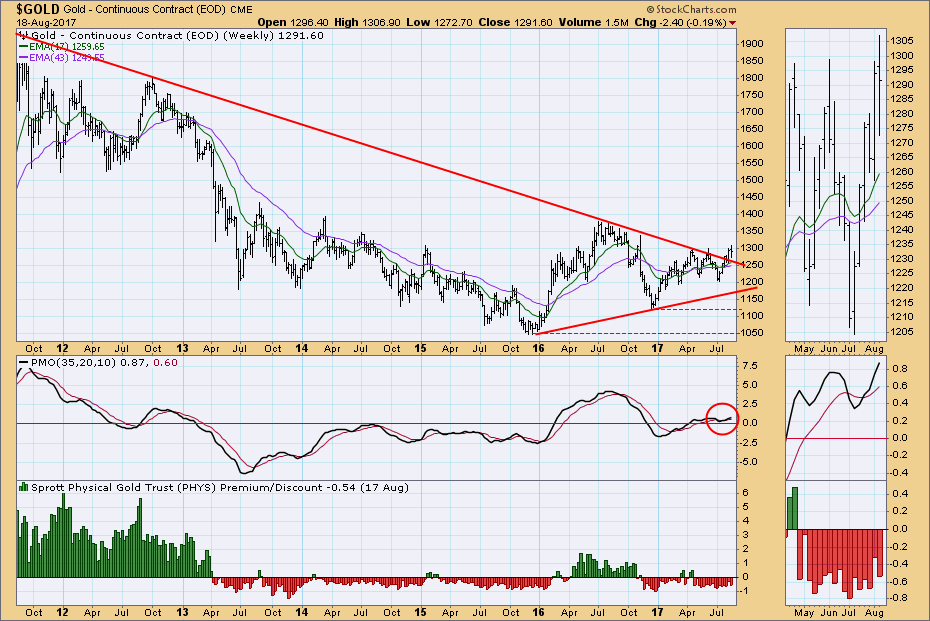 USO seems to have found support on the declining tops line it broke above last month, and it has also gotten back above the rising trend line drawn from the June low. The PMO has turned up, so another breakout attempt may be starting. 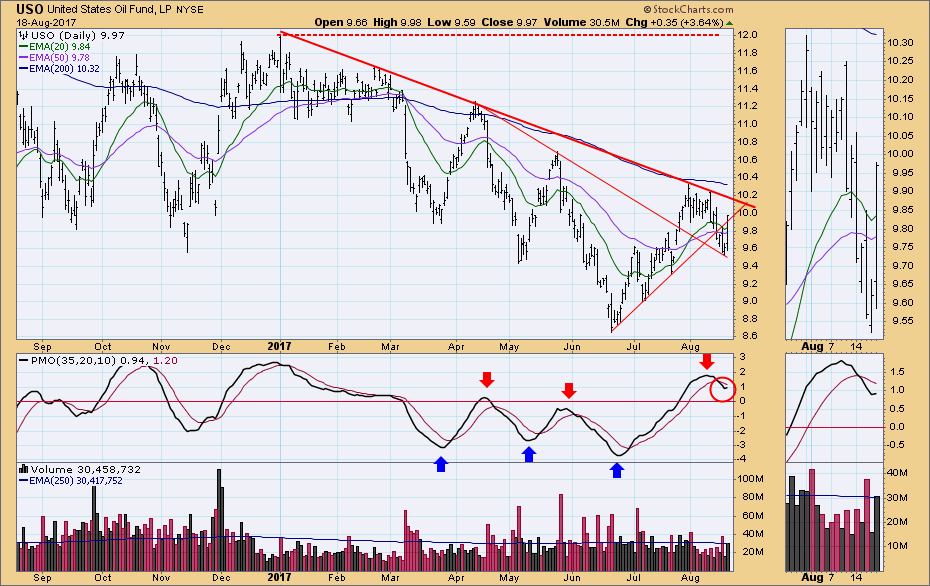 On the USO weekly chart price is currently being contained by a declining tops line, which is within a trading channel. The weekly PMO is rising above its signal line, so the outlook is positive in this time frame. 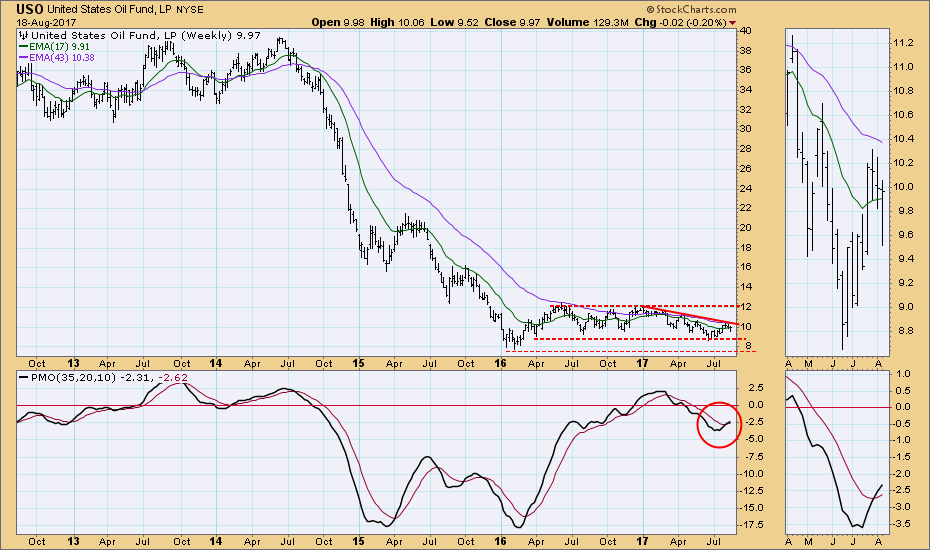 A short-term rising wedge has formed on the TLT daily chart. This formation usually breaks downward, but price attempted an upside breakout today. 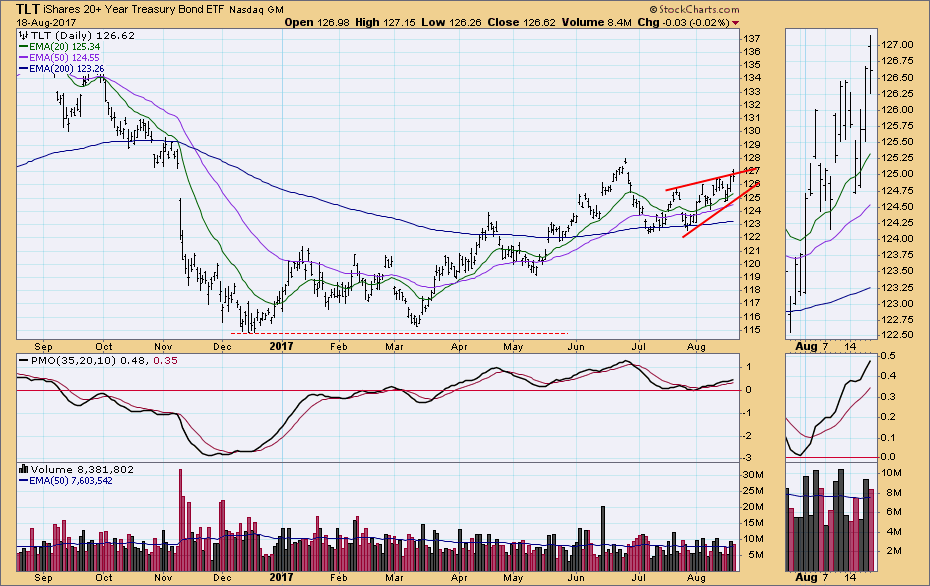 It appears to me that TLT has successfully broken above the resistance of the declining tops line. The breakout won't be termed 'decisive' until price reaches about 128.0, but it looks pretty good at this point. 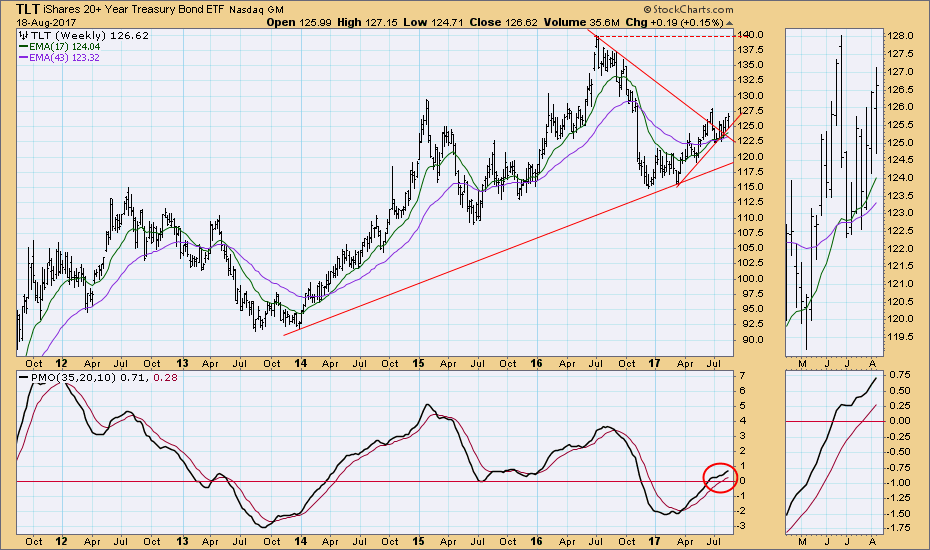