I am often asked first, "What's the difference between the PMO and the MACD (or PPO)?" which is usually followed by, "Why do you prefer the PMO?". I'll answer the second question right now. As a mother loves her child, so do I love the PMO--I was involved in its development. However, that's only part of it. The main reason is that having studied all three indicators, I believe the PMO is the most robust. The best place to start is by looking at each indicator and how it works. By understanding the basics of the equations and meaning of each, you can make an informed decision about preference.

I really appreciate the simplicity of these related indicators. Borrowing from ChartSchool:

The concept is fairly simple. Take the 26-EMA and subtract it from the 12-EMA to get the MACD value. The signal line is just a 9-EMA of the MACD values. 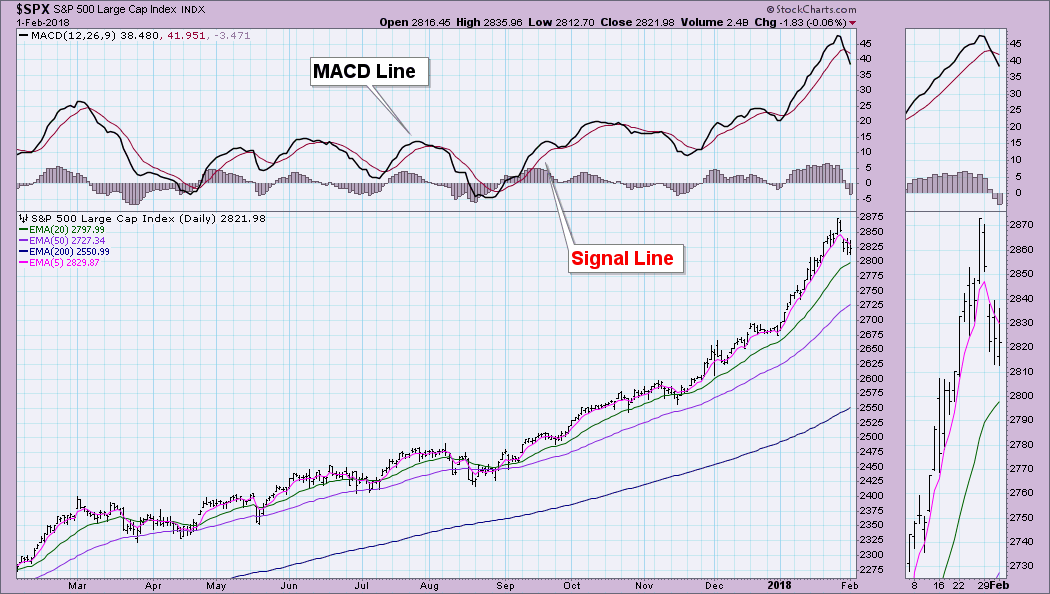 As noted, the MACD is unbounded. Problem #1 is that you can't use it for overbought/oversold analysis and Problem #2 is not being able to use it as a relative strength tool given every stock/ETF/etc. MACD value is not comparable to others. Another problem with the MACD is the values aren't helpful on a long-term daily chart. 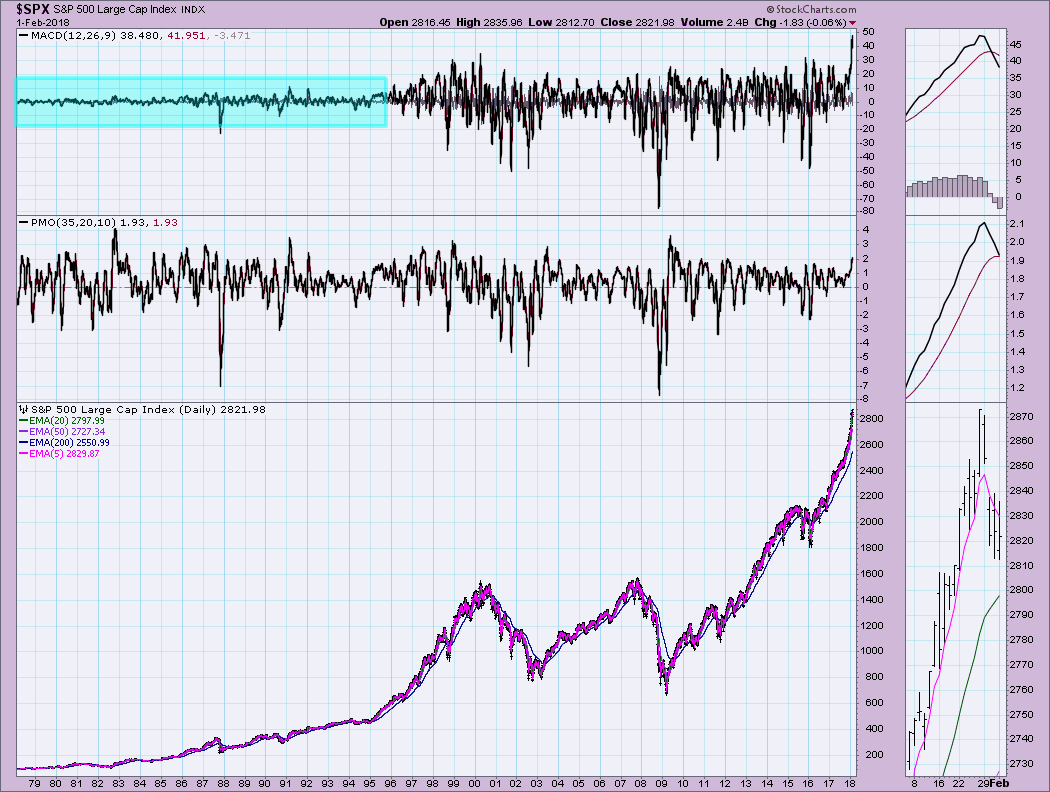 A fix was come up with to help with those problems with the MACD--the development of the PPO. Instead of raw MACD values, the PPO calculates the percent change in the MACD value. By turning it into a percentage, you can now use it for overbought/oversold conditions, it is 'bounded', as well as compare PPO values against other PPO values for relative strength analysis. 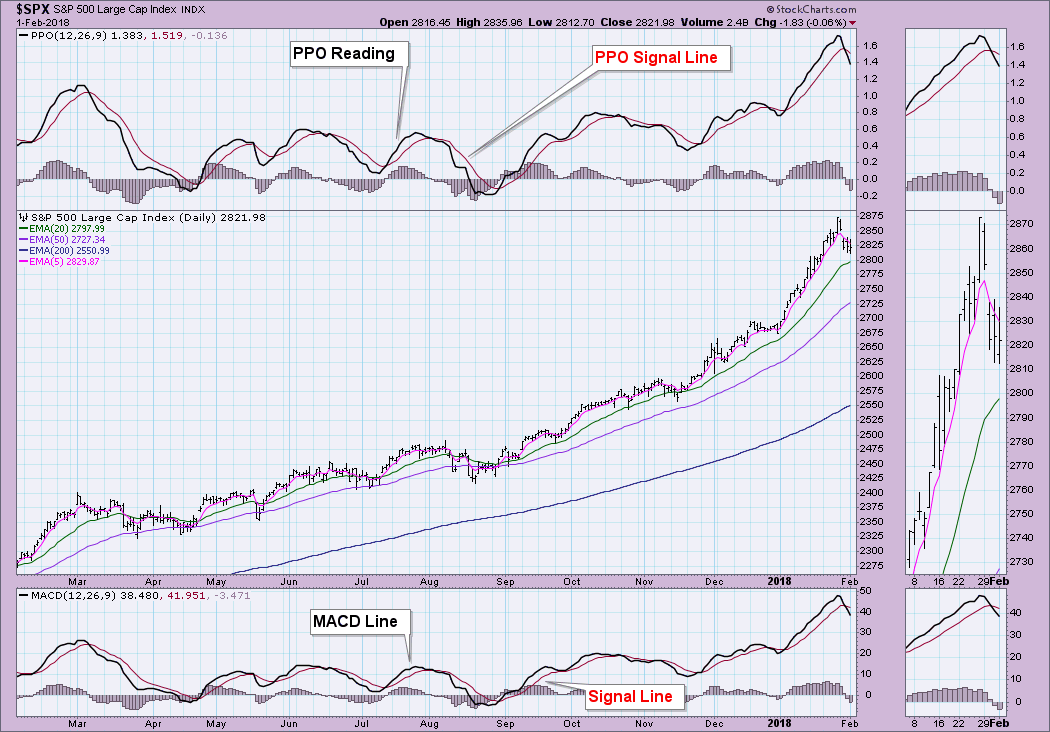 That brings us to the PMO. While it may appear almost the same as both of the above indicators; there are subtle differences. I'll leave the MACD out of this discussion as it is unbounded and very different from the PMO. The PPO is best compared to the PMO because it is similarly bounded. The main difference is the calculation and smoothing process. While both are based on price and rate of change (momentum), the PMO reacts somewhat differently and will crossover, top and bottom at different times when using the default values.

So let's make a comparison of the PPO and PMO. Below is a chart with both the PMO and PPO. While the undulations and crossovers are quite similar, the tops and bottoms sometimes are different which can result in a bullish confirmation vs. a negative divergence. 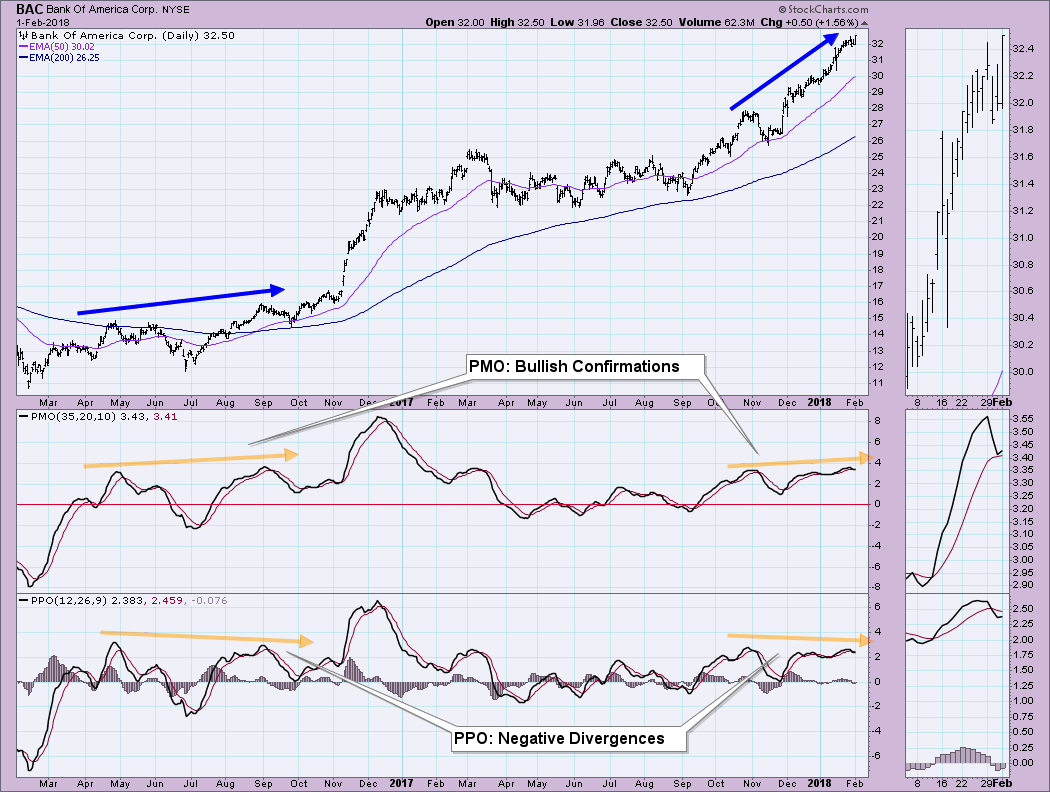 It is important to note that in the chart above, we are using the standard defaults for the PPO and PMO. They are different time period settings (i.e. PMO is (35,20,10) and the PPO is (12,26,9). If you use the same settings, the two are almost identical, so you should keep that in mind. However, using the standard defaults as users generally do, you will see differences in divergences.

I hope this has helped in your understanding of these three indicators. I recommend you do some extra reading on these in ChartSchool so that you can become more comfortable using any indicator. While I may be very biased toward the PMO, I completely understand comfort levels using what you've used for many years. For example, I prefer using the OBV vs. Accumulation/Distribution line. While the calculation may be more precise on the A/D line vs. the simple OBV all-or-nothing calculation, I grew up using the OBV and understand it inside and out. So maybe the PMO is more complex and you're used to the simplicity of the MACD/PPO, I totally get it. If this article piqued your interest, try adding the PMO to your charts and see how it reacts. You may like it or you may not. In any case, make sure you understand the differences, especially between the MACD and the percentage-driven PPO and ratio-driven PMO.