The technology sector (XLK) switched from NEUTRAL to BUY on Thursday, but reversed from BUY to NEUTRAL on Friday. The problem is that recent sideways price movement has squeezed the 20EMA and 50EMA very close together, and price movement above or below the EMAs can cause whipsaw signals. To review, our Intermediate-Term Trend Model (ITTM) changes to BUY when the 20EMA crosses up through the 50EMA. The signal changes to NEUTRAL when a 20/50EMA downside crossover takes place above the 200EMA. If XLK rallies above the EMAs on Monday, a new BUY signal will be generated; however, the daily PMO has topped, leading me to believe that the decline will continue. 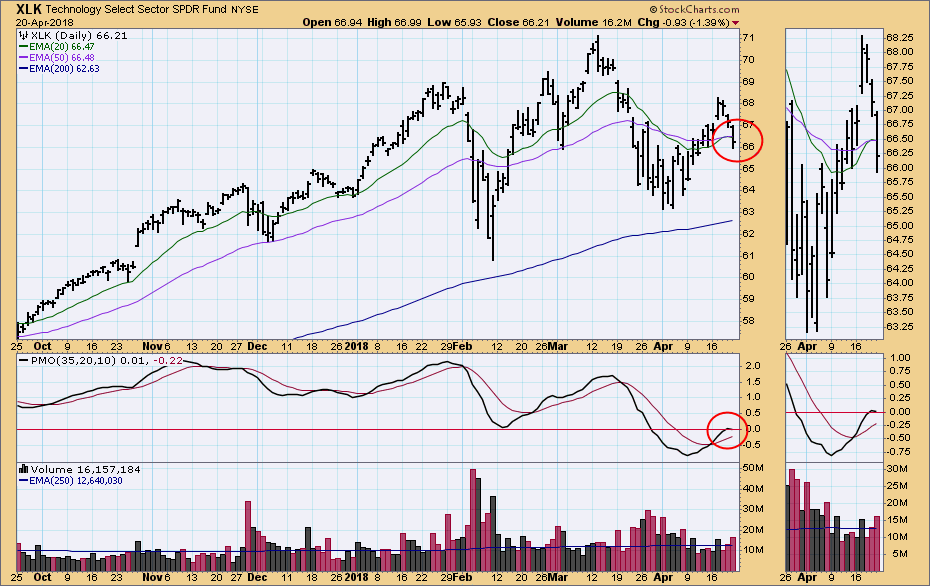 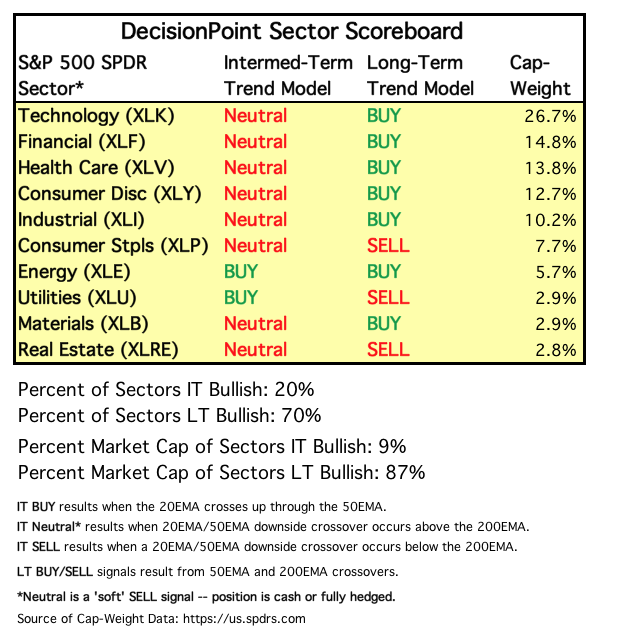 SPY Daily Chart: Notice that this month's rally failed before it reached the top of the triangle formation, and the daily PMO is getting ready to top. Volume faded into the rally, but it was stronger on Thursday and Friday. This almost certainly has to do with options expiration this week. 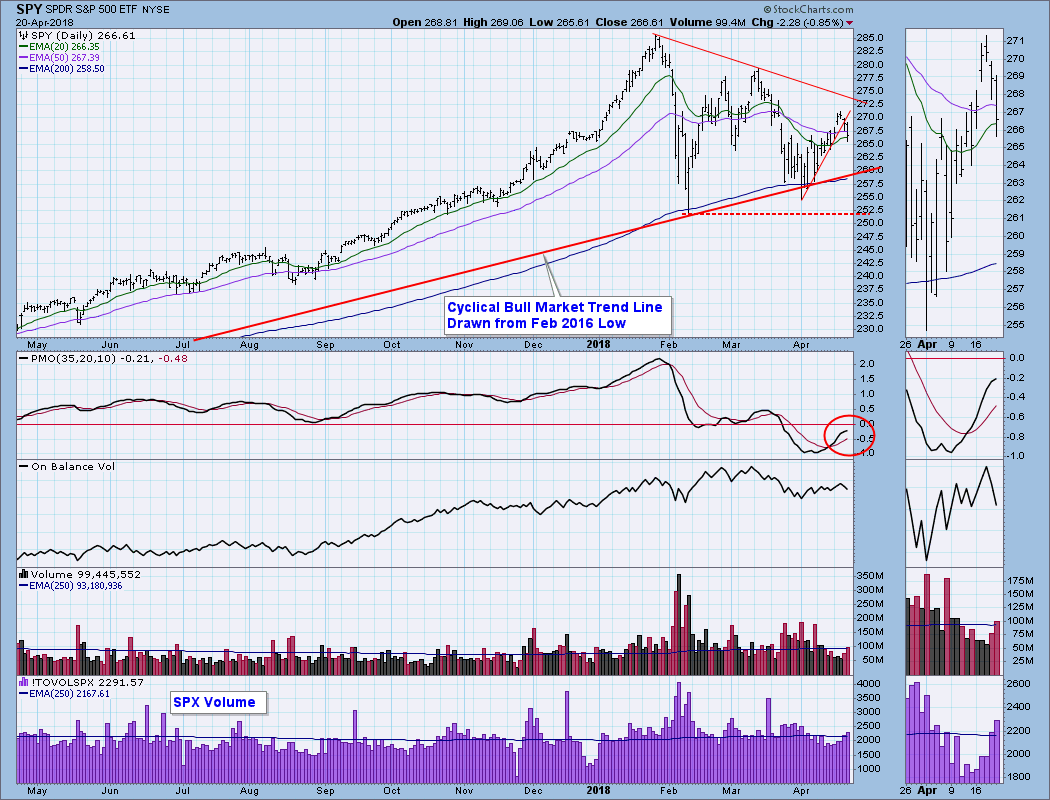 SPY Weekly Chart: This week's price bar looks like a top, and the weekly PMO is still falling. The cyclical bull market rising trend line remains intact, but I think it will be challenged again soon. 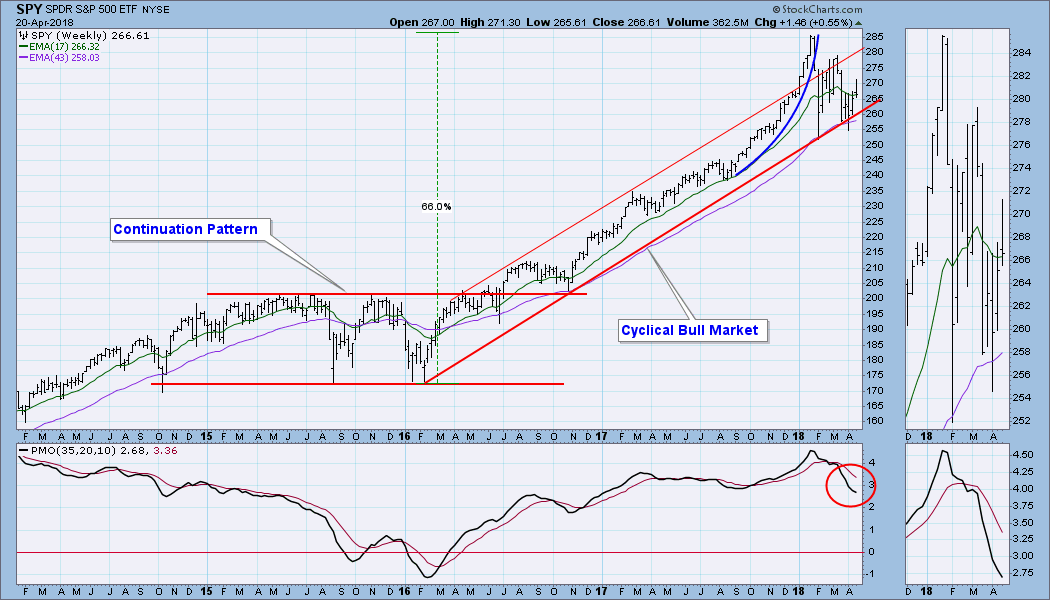 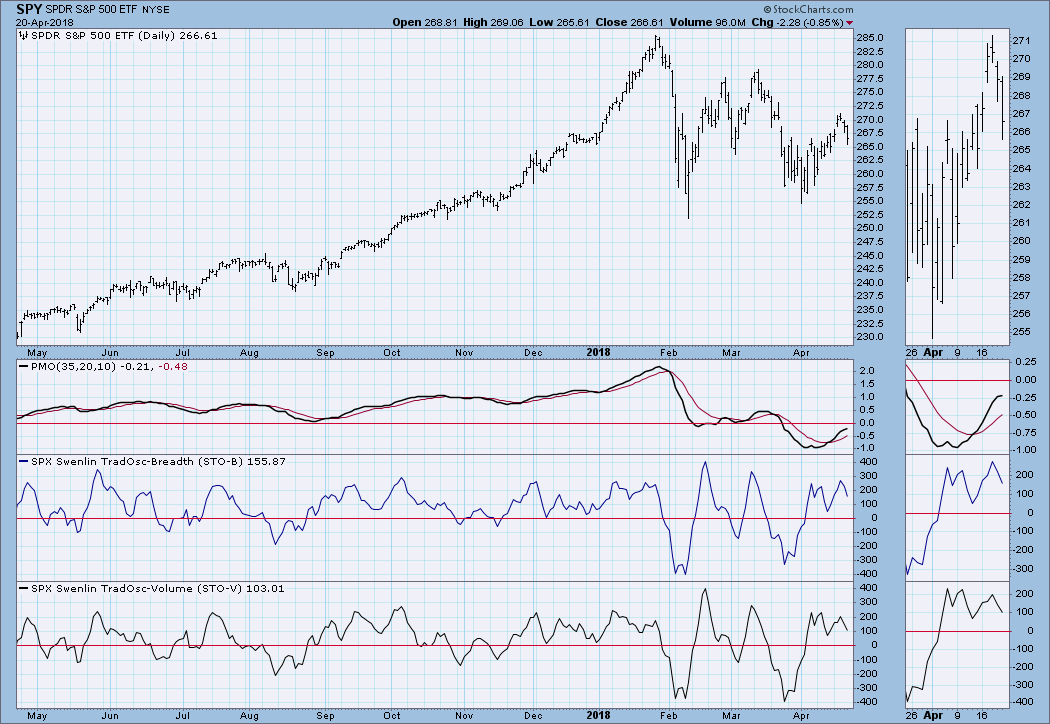 Intermediate-Term Market Indicators: The ITBM and ITVM had become somewhat overbought, and they topped on Friday. There are some pretty profound reverse divergences in place, which is actually a positive sign -- a lower indicator low versus a higher price low shows that price is resisting an internal blowout. 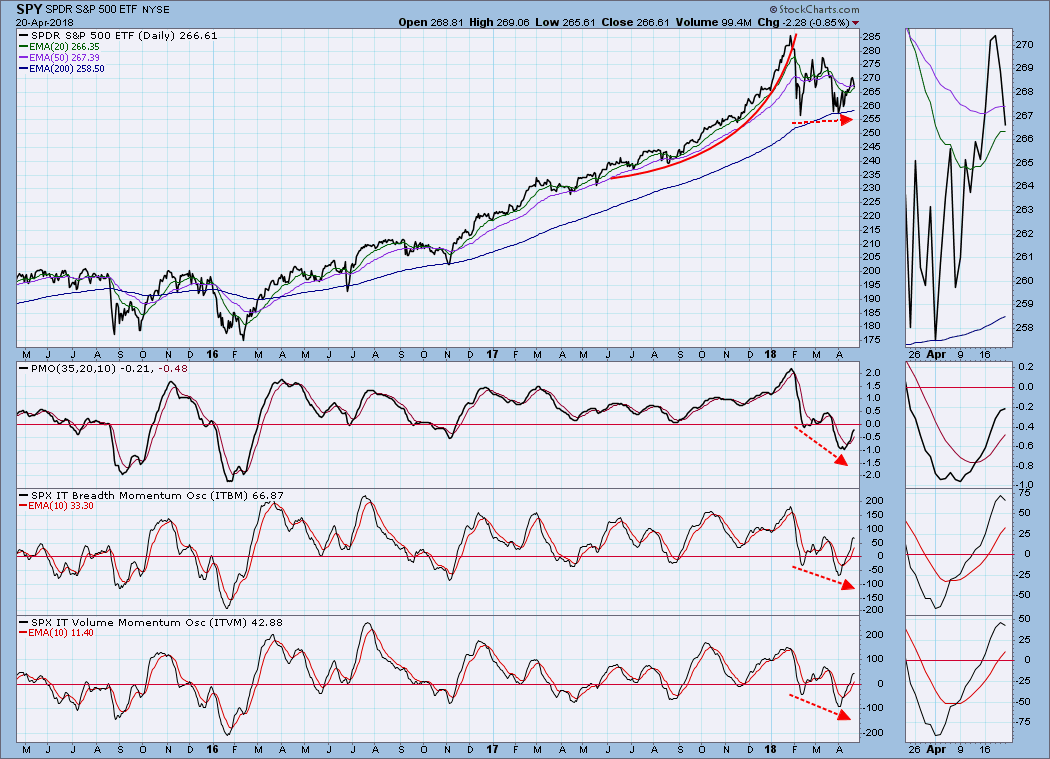 Conclusion: I continue to believe that we are in a bear market. We still need to see a 50EMA/200EMA downside crossover (death cross) to make it official, but the parabolic rise into January caused extreme separation between the EMAs, and that kind of broke the long-term model temporarily. Short-term and intermediate-term indicators have topped and they will accommodate a substantial decline before they become oversold. Obviously, I can't know what the future holds, but it looks to me as if the market is poised to retest this year's lows.

UUP Daily Chart: On Friday UUP attempted to break above the declining tops line, but the price action appears to have more to do with the three-month trading range than the falling wedge. By that I mean Friday's action resembled two prior failed breakouts in March and April. 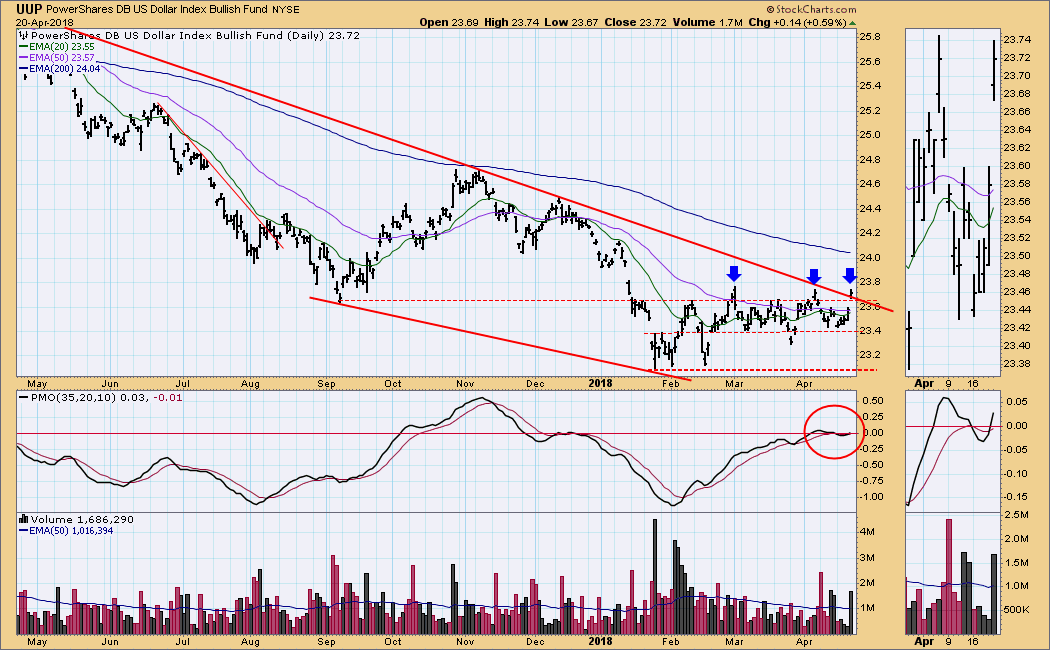 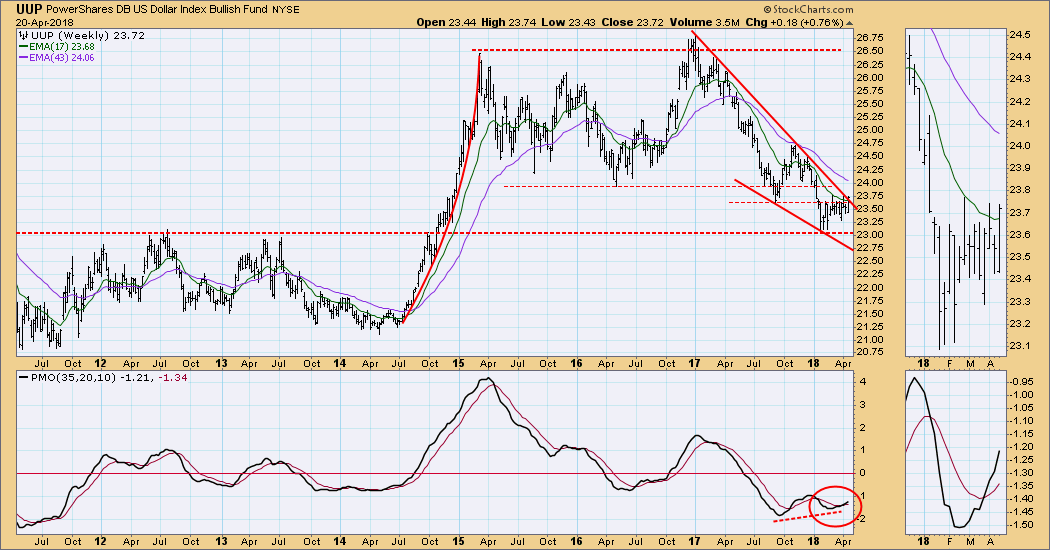 GOLD Daily Chart: Gold remains within a four-month trading range, and the EMAs are positively configured. The problem is that sentiment remains negative, and it will take stronger price action to to flip sentiment to the positive side. To clarify, extremes of sentiment can be associated with turning points; otherwise, sentiment should normally be in agreement with the trend. 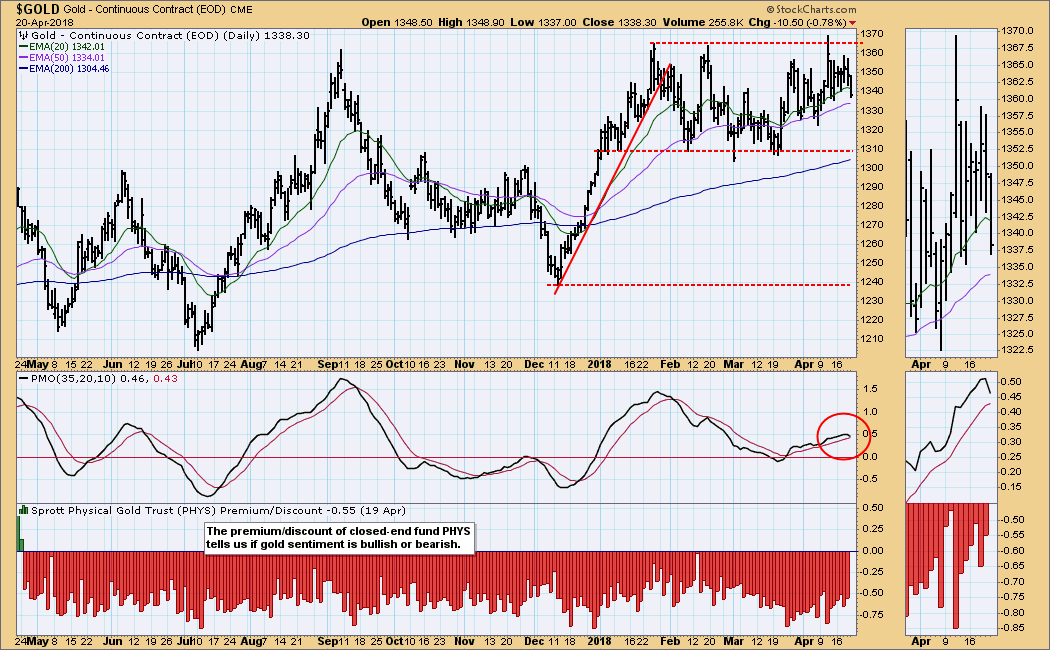 GOLD Weekly Chart: While gold has moved positively from the late-2015 low, it needs to exceed the 2016 top before a long-term rising trend will be official. 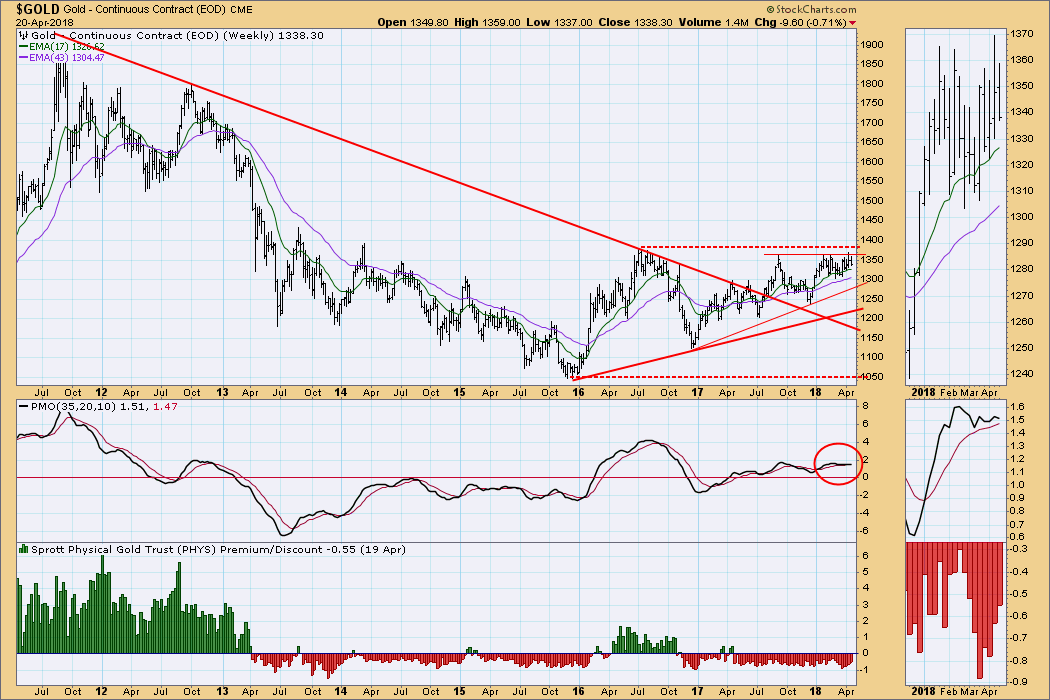 USO Daily Chart: When USO hit 14.00 this week, last week's breakout became decisive. This means on a technical basis we expect the breakout to endure. 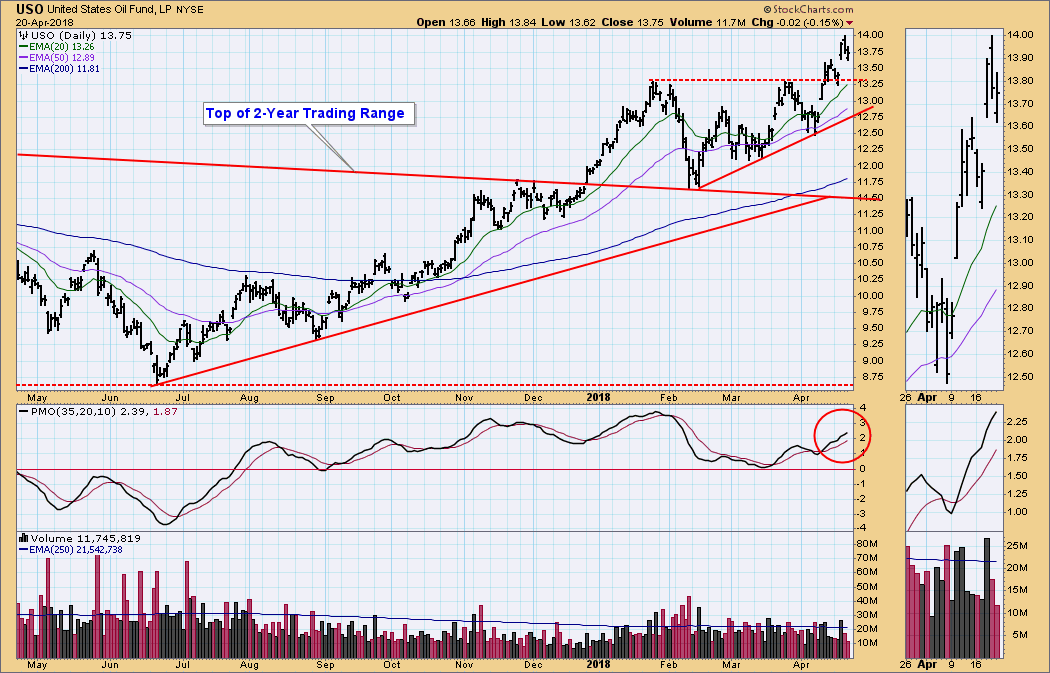 USO Weekly Chart: Both $WTIC and USO have broken out of their four-month trading range, and $WTIC will hit important resistance at $78/bbl. The next resistance for USO is at about 16.00, which is more or less comparable in terms of percentage change. 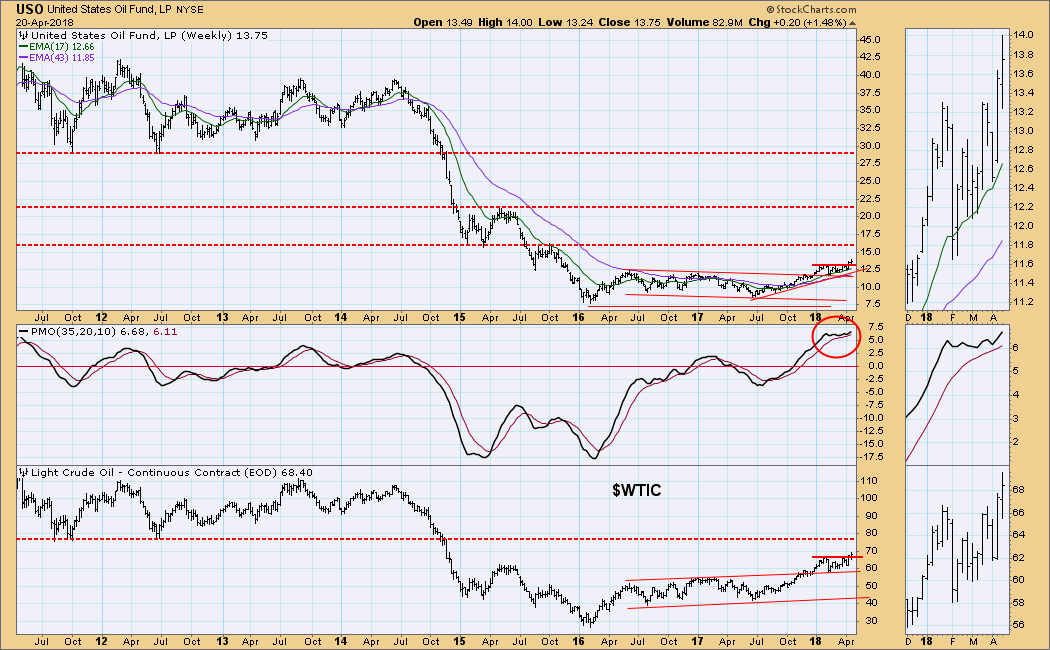 TLT Daily Chart: TLT broke down this week. The daily PMO dropped below its signal line, and the 20EMA dropped below the 50EMA, generating an IT Trend Model SELL signal. 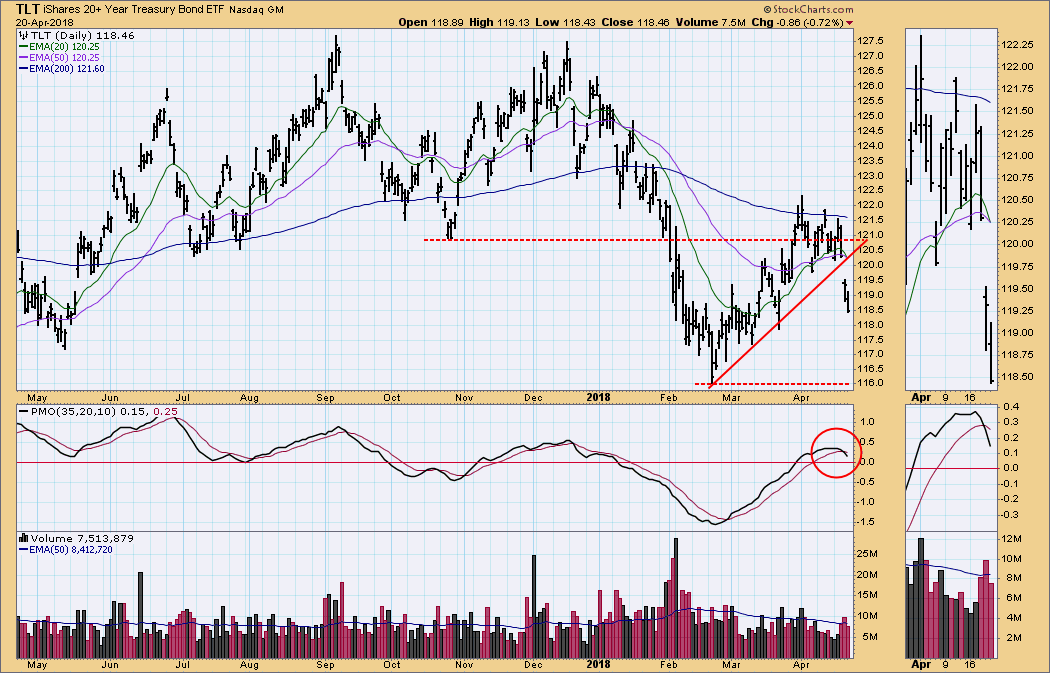 TLT Weekly Chart: When the weekly PMO tops below the signal line, I normally interpret it as very bearish; however, there are two prior occurrences (2015 and 2016) where the outcome was bullish. The difference this time is that the 17EMA is below the 43EMA, making a bearish outcome more likely. 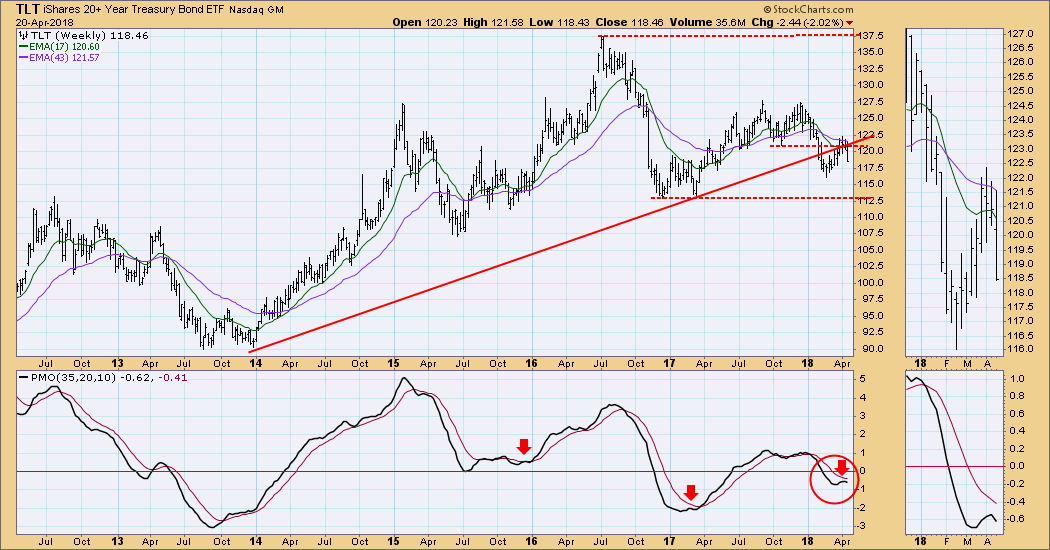