Back in the day, options expiration days were characterized by high volatility and exceptionally high volume; however, in recent years the market stays relatively calm, and the high volume only appears at the end of each quarter. These expectations were not disappointed in today's trading. In fact, the entire week was calm, as price worked sideways into a flag formation. Volume for the last two weeks has been somewhat thin, which implies that market participants are not fully committed to the rally. Nevertheless, from the April low a rising trend has been established (a bottom above a bottom, and a top above a top), and the picture remains positive. 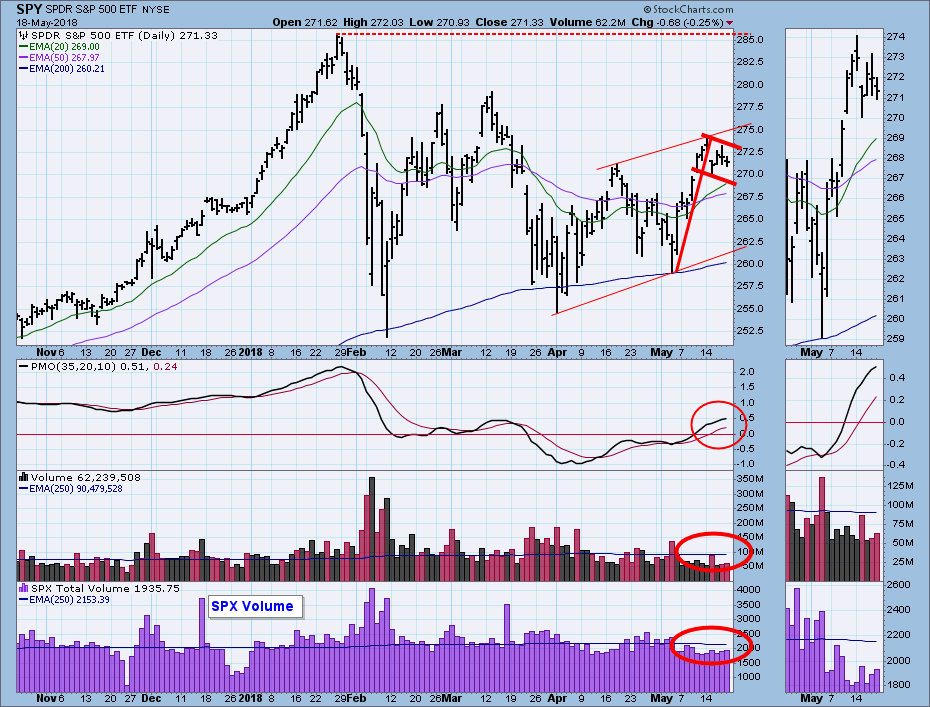 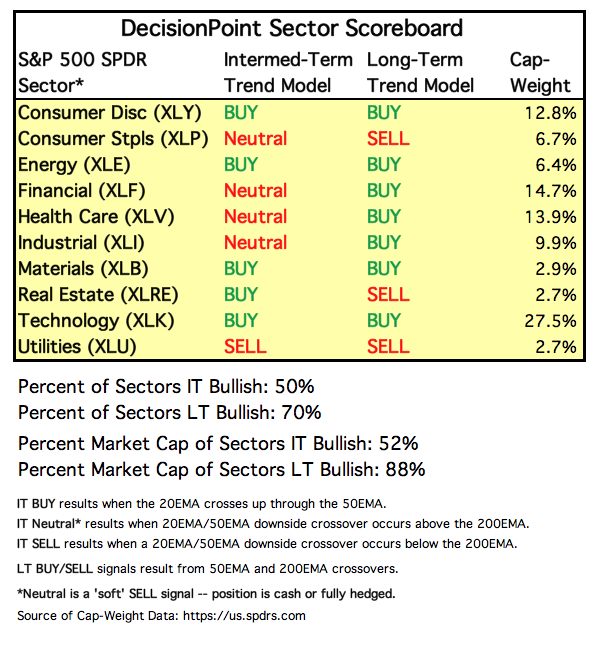 SPY Daily Chart: Another perspective shown on this daily chart is SPY's relationship to the cyclical bull market rising trend line. Also, we can see how SPY has broken out of a symmetrical triangle and is consolidating just above it. If it breaks down from that support, that would be a problem. 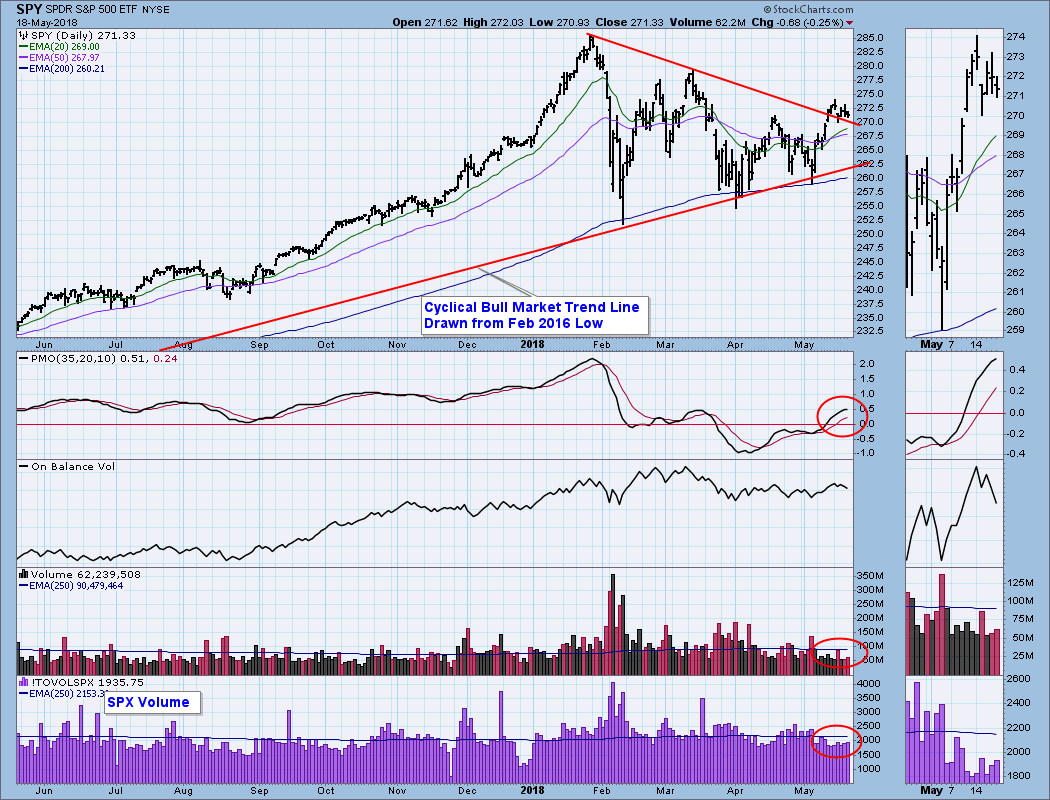 SPY Weekly Chart: SPY is in the middle of the bull market rising trend channel. The weekly PMO is indecisive, having turned up last week, now turning back down this week. 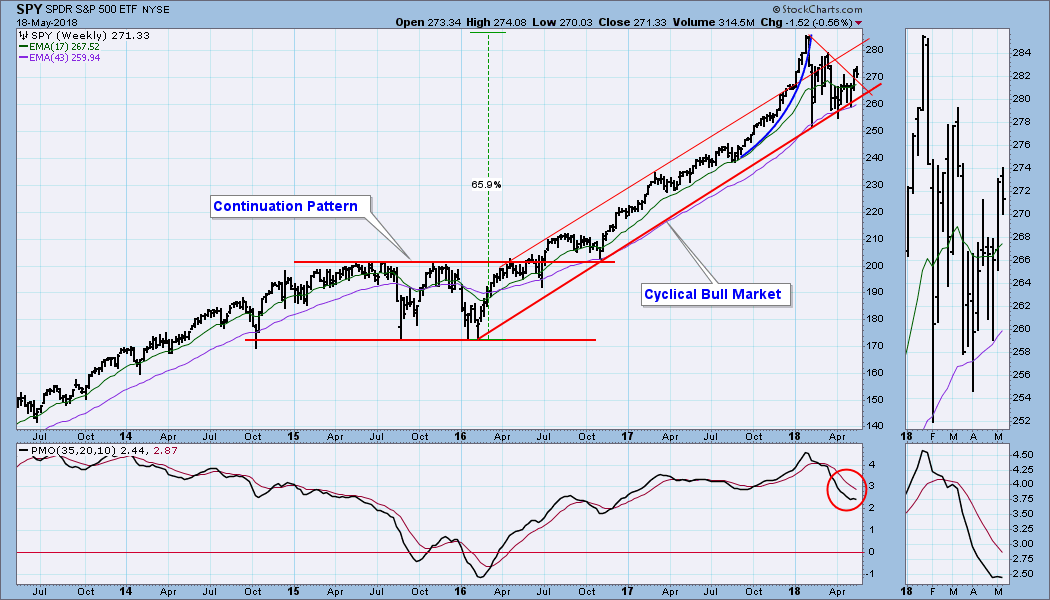 Short-Term Market Indicators: So far the market is behaving bullishly in this time frame. Specifically, the indicators are moving down from overbought readings, while price is holding its ground. 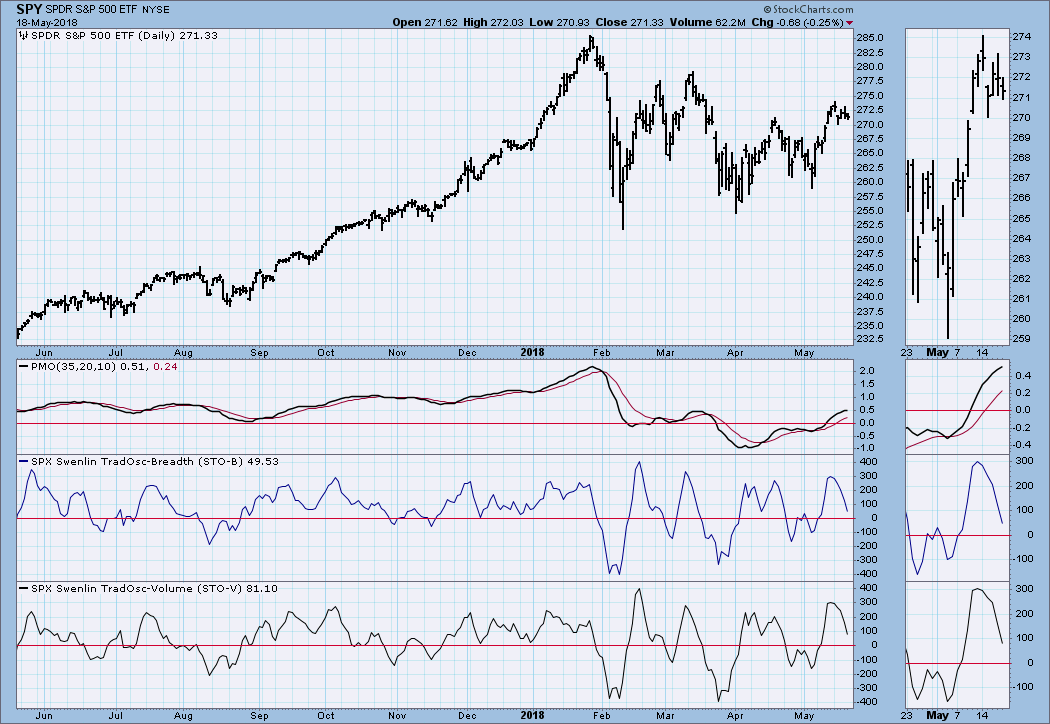 Intermediate-Term Market Indicators: If price continues to consolidate, these indicators will top, which would be a concern. But they are still far from being overbought, and will accommodate higher prices if the rally continues. 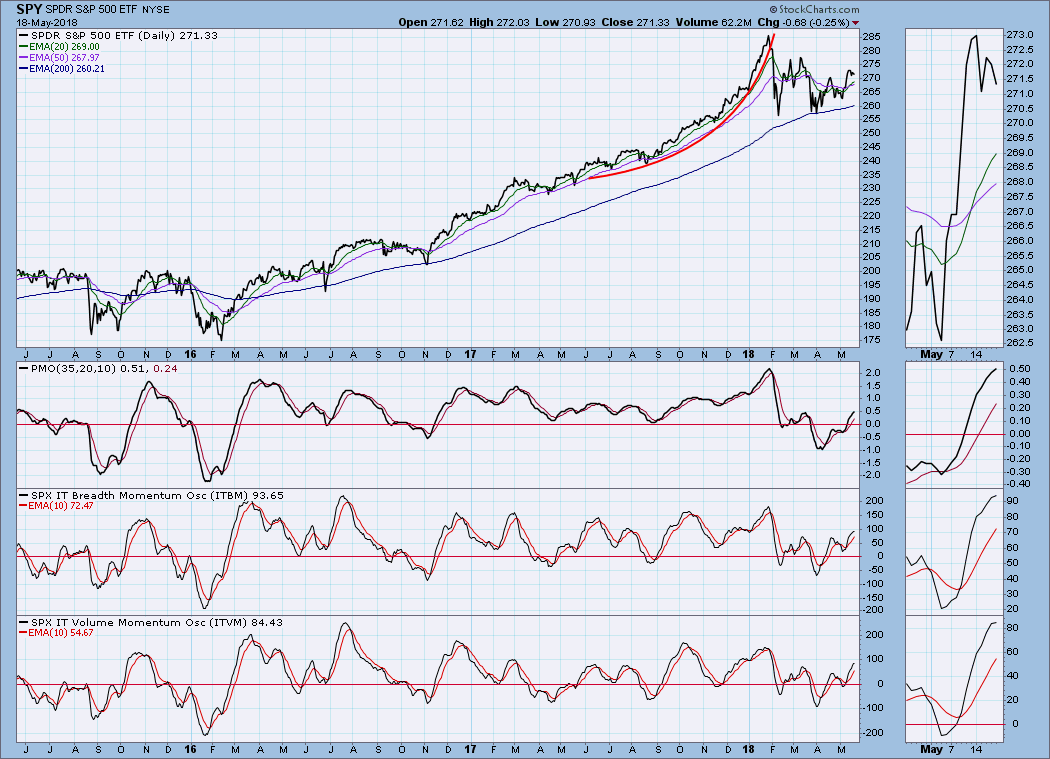 Conclusion: Last week I gave up on the idea that we are in a bear market, and I didn't see anything this week to make me regret that decision. I am particularly encouraged by the fact that short-term overbought conditions are being relieved without significant price deterioration. So far, so good. In spite of conditions having edged toward the positive, I can't say that I'm especially excited about the market's prospects one way or the other. I suppose that is because for almost four months the market has been moving sideways in a range that has become gradually more narrow. And, while the models are on BUY, I still feel mostly NEUTRAL.

UUP Daily Chart: Last week UUP consolidated the up gap from the previous week, and this week UUP gapped up again. At this point price is approaching overhead resistance, and the PMO is overbought and near the top of an eight-year range. 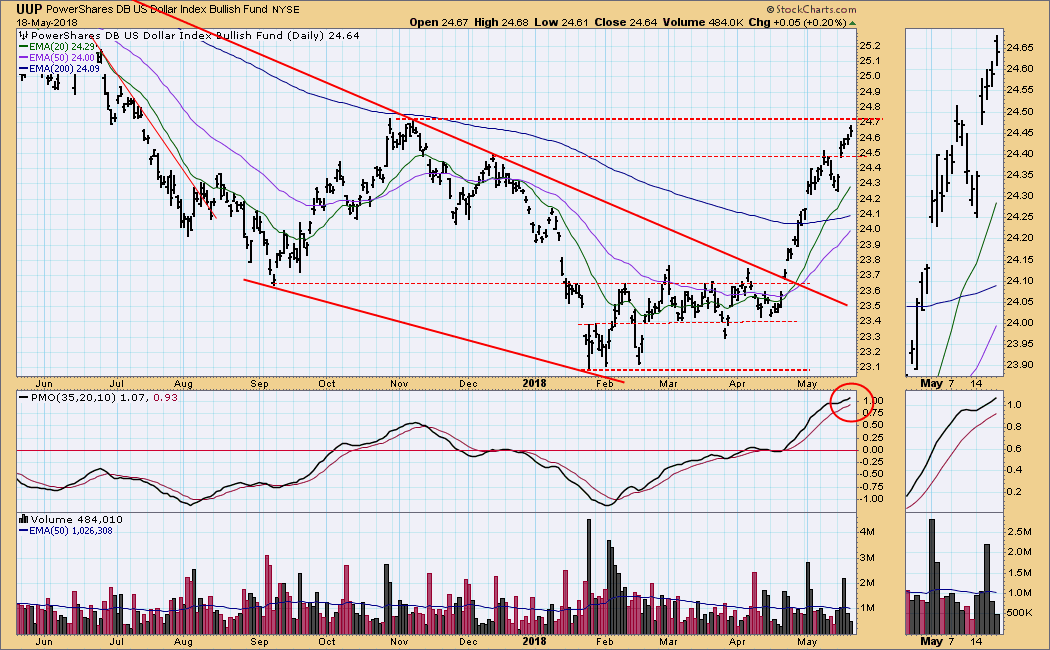 UUP Weekly Chart: We can see a strong breakout from a large falling wedge, and I think this up move will last a while. 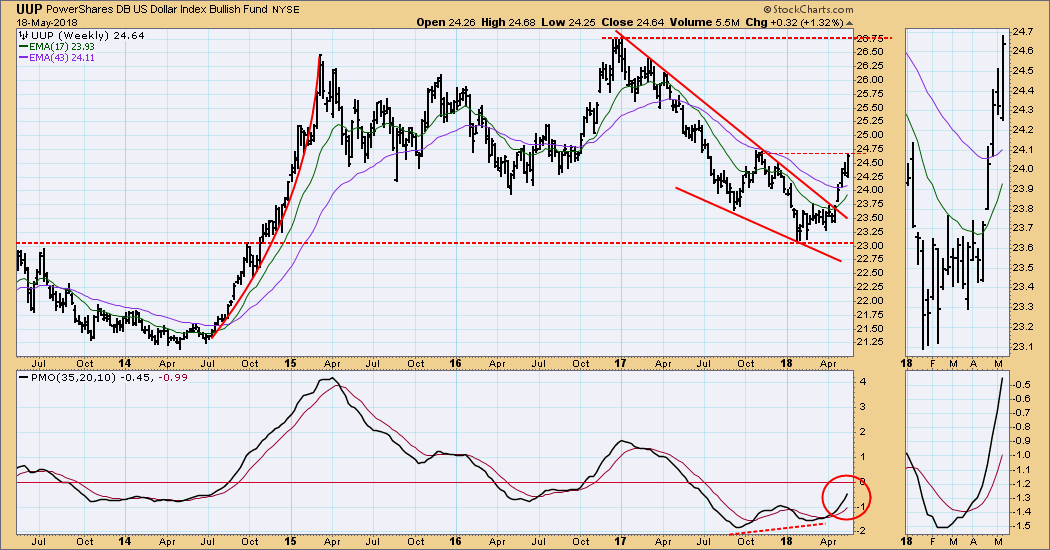 GOLD Daily Chart: Strength in the dollar translated directly into weakness in gold, which broke down through the bottom of the trading range it has maintained all this year. 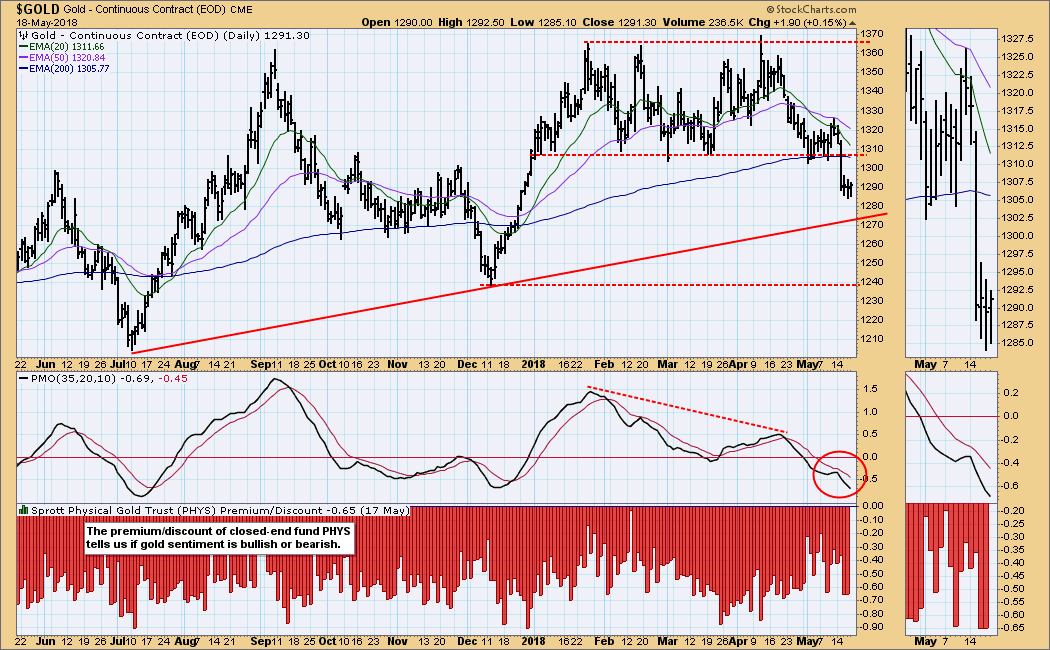 GOLD Weekly Chart: In the last year gold has made numerous attempts to reach line of resistance drawn across the 2016 high, but each attempt failed. Now gold appears to be headed toward a test of one-year rising trend line. Overall gold is modestly positive -- the 17EMA is above the 43EMA, and the PMO is in positive territory -- but the trends are not encouraging. 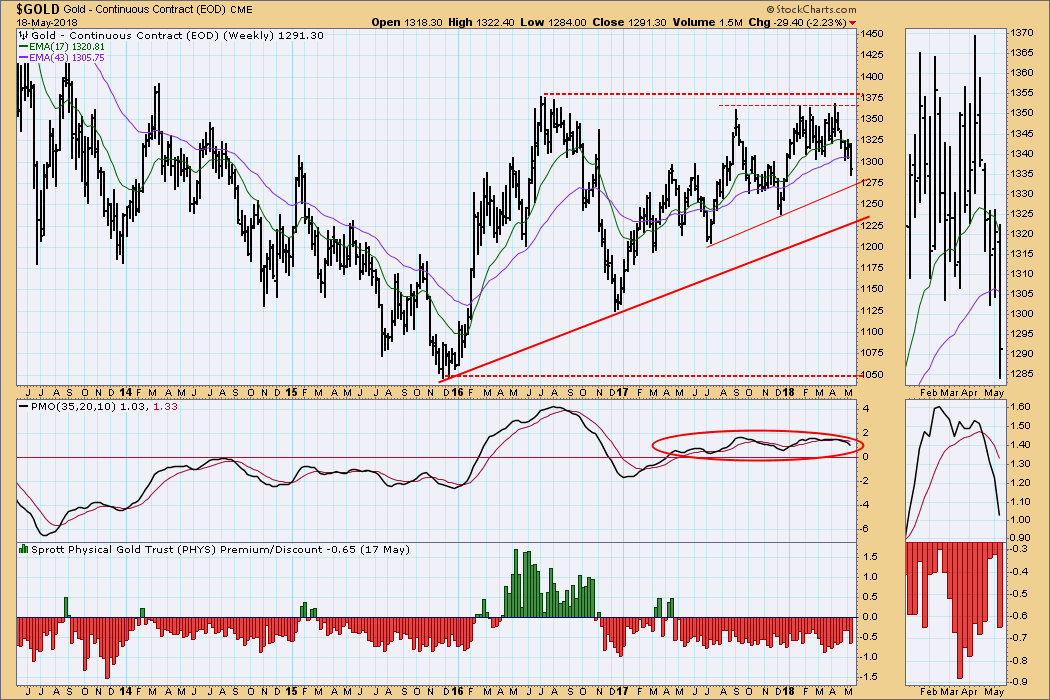 USO Daily Chart: For nearly two weeks USO has been hugging the top of a rising wedge pattern, which gives the impression that the pattern will resolve upward, the opposite of what we normally expect. On the other hand, the daily PMO has topped, so another test of the rising trend line could be in the cards. I continue to note the series of rising trend lines, each steeper than the preceding one, which resembles a parabolic advance. A modest correction would be healthy, but I don't expect anything major to the downside. 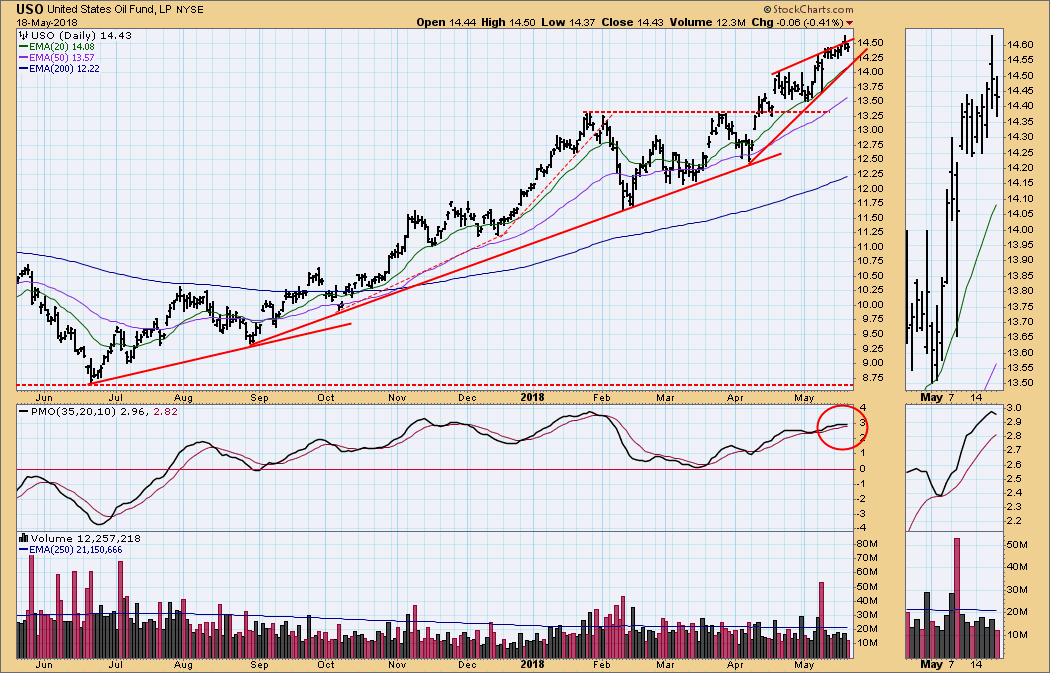 USO Weekly Chart: Again, I see resistance at about 16.00, which would be about $78/bbl for crude. 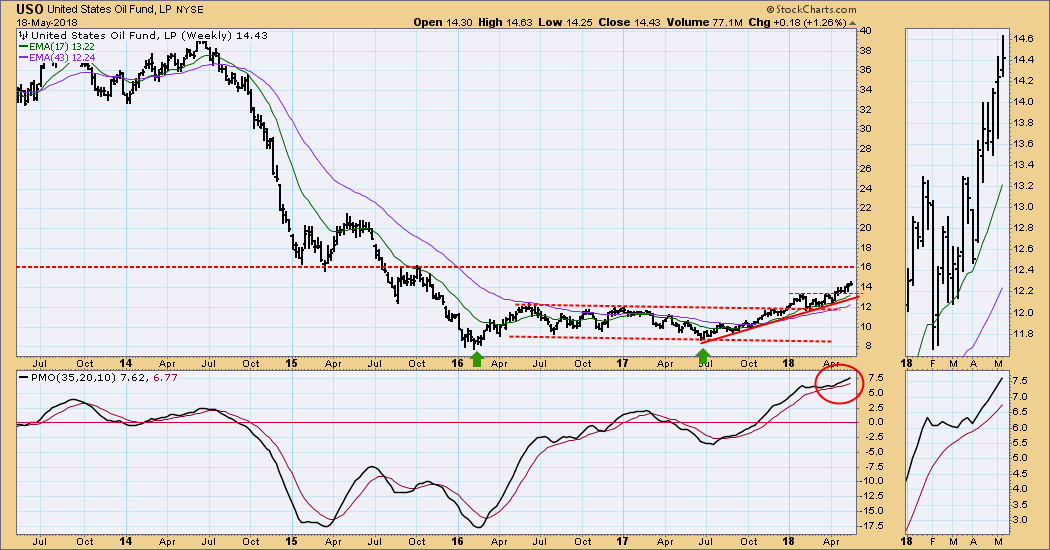 TLT Daily Chart: The rally off the April low became a two-week sideways consolidation in May, but this week TLT broke down sharply. The daily PMO topped below the signal line as well as the zero line, a very negative configuration. The overwhelming negative for the bond market is that the 35-year bull market in bonds is over, and it is a virtual certainty that the long-term direction in bond prices will be down. A part of that down trend will be occasional counter-trend rallies, like the one from the February low, but it is unlikely that we will see new all-time highs for decades. 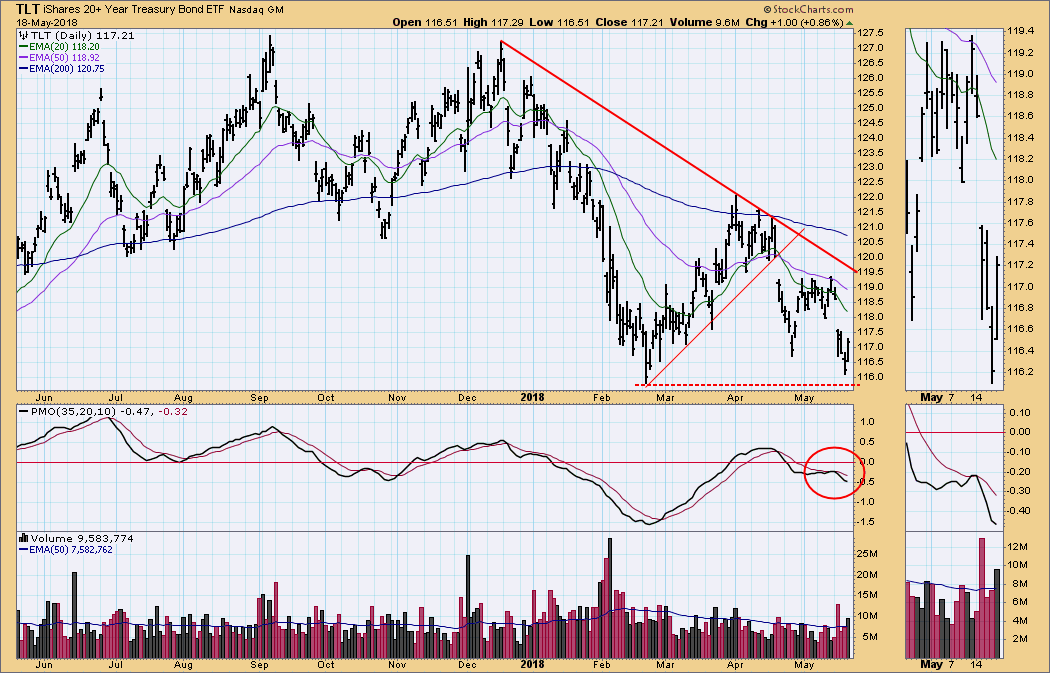 TLT Weekly Chart: The large head and shoulders formation is close to executing, meaning that price is trying to break below the neckline. I fully expect that to happen. 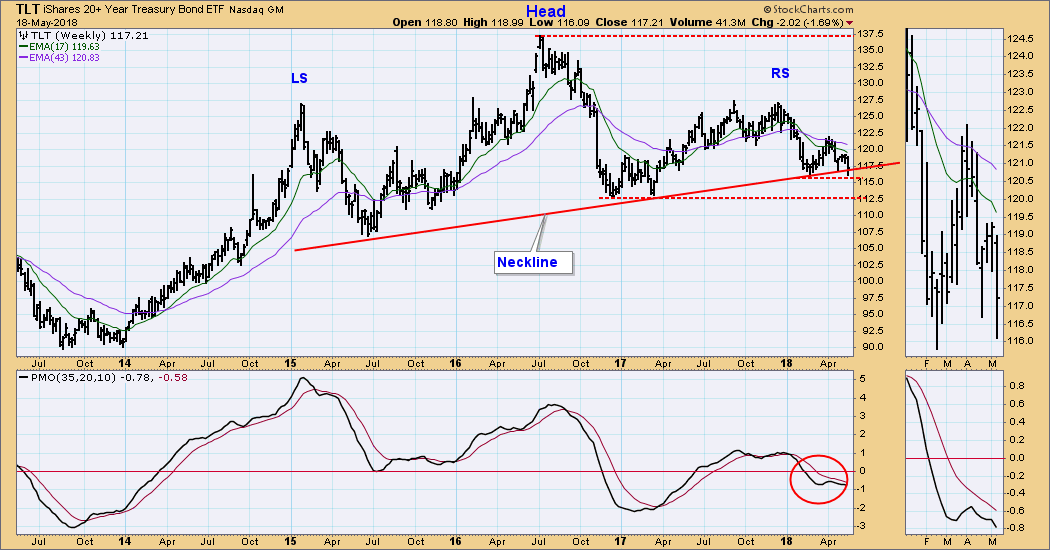