Another day of decline after a head fake at the open when prices gapped up and rallied. The Nasdaq and Russell 2000 never caught a break as they began their decline right out of the gate. These two indexes have shown great relative strength, but are now taking it on the chin. Remember when the Dow was leader of the pack? Well apparently it still is as more Scoreboards lose BUY signals. Looking at the other three indexes, ITTM Neutral signals are not out of the question. 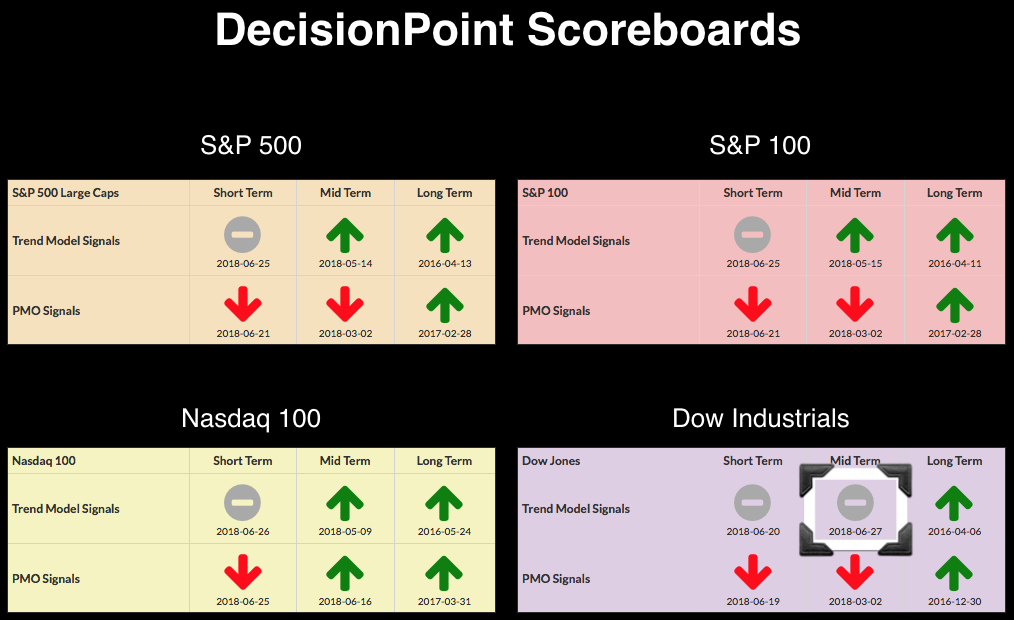 The IT Trend Model Neutral signal was activated when the 20-EMA crossed below the 50-EMA while above the 200-EMA. What strikes me right away is the failure of important support 24200. Price really needs to rally right now as it is sitting precariously above the 200-EMA. This could be the signal that a bottom is coming in, but I don't see any supporting evidence from the indicators. The PMO has lost its rising trend and is showing no interest in even decelerating at this point. I suppose you could point to a rather flat OBV, but I certainly wouldn't be banking on a rally simply based on a flat OBV. 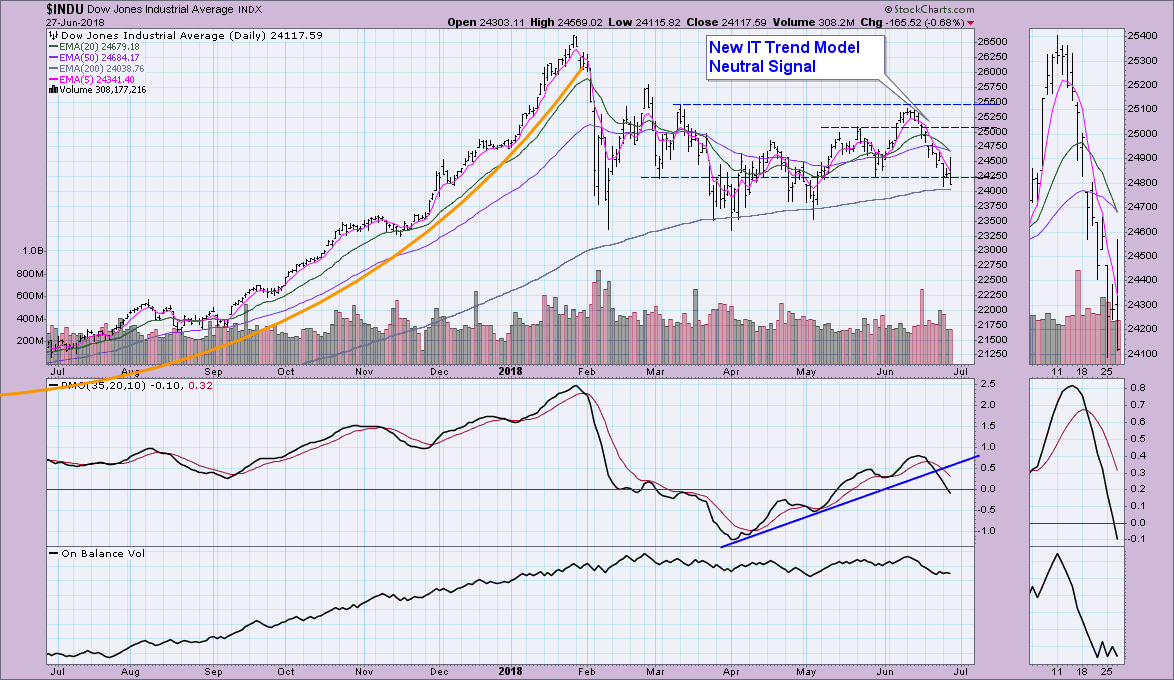 Today XLB switched to an Intermediate-Term Trend Model Neutral signal. This occurs when the 20-EMA crosses below the 50-EMA while above the 200-EMA. If the crossover occurs below the 200-EMA it is a SELL signal. 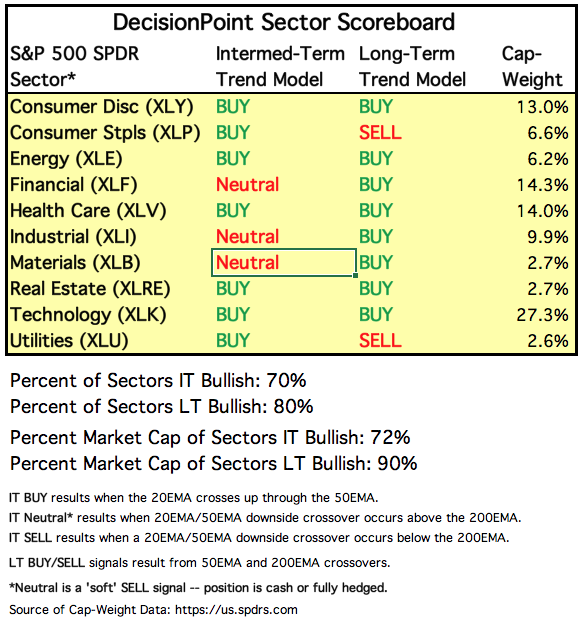 SPY Daily Chart: Unlike the Dow, the SPY is holding well above its 200-EMA. However with internal and relative strength weakening, I'm not so sure that is a good thing. Note the 200-EMA is at about $262.50. That coincides with the March low. Given the breakdown of the rising trend on the PMO, the decline of the OBV and SCTR, I'm afraid this doesn't appear over yet. 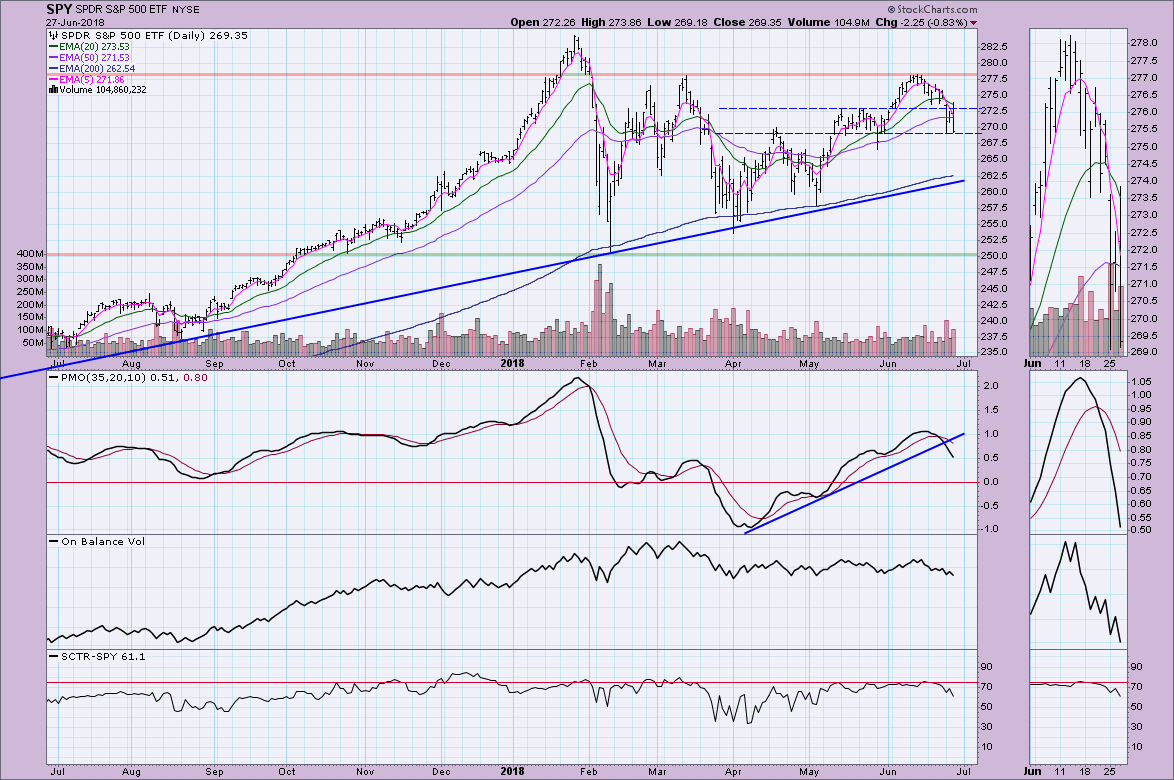 Climactic Market Indicators: On the bright side, we are seeing somewhat climactic readings on breadth combined with a penetration of the lower Bollinger Band on this inverted scale. Typically when combined, you'll see a rally pop. Note that on Monday we saw a similar set up which I called a selling exhaustion. I suspect this one is too. However don't throw a party, today we had a rally pop, but the day finished substantially lower. 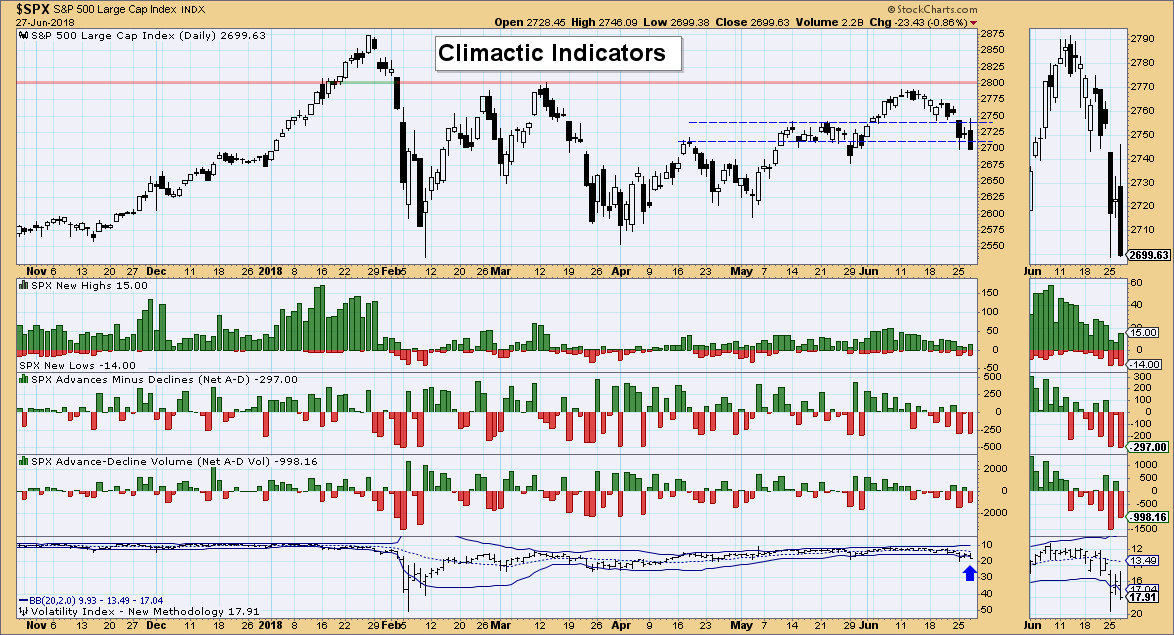 Short-Term Market Indicators: These indicators are near-term oversold. In general I would look at this favorably. However, given the Trend Models and PMO on the SPX, I'm afraid we are looking at confirmation of this decline. Note that the last time we saw readings dip below the bottom of the range, price continued to fall. 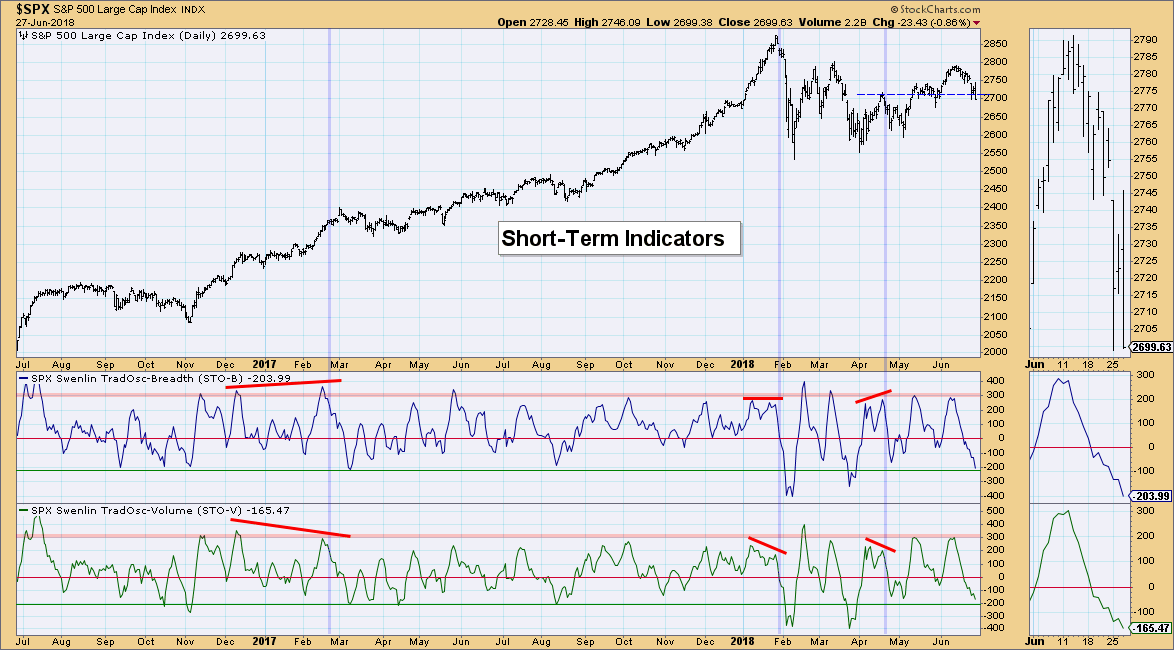 Intermediate-Term Market Indicators: For awhile these indicators were a great security blanket. They were rising and maintaining a nice rising trend. That is no longer the case. They are at least above the zero line, but they are making a bee line toward negative territory. 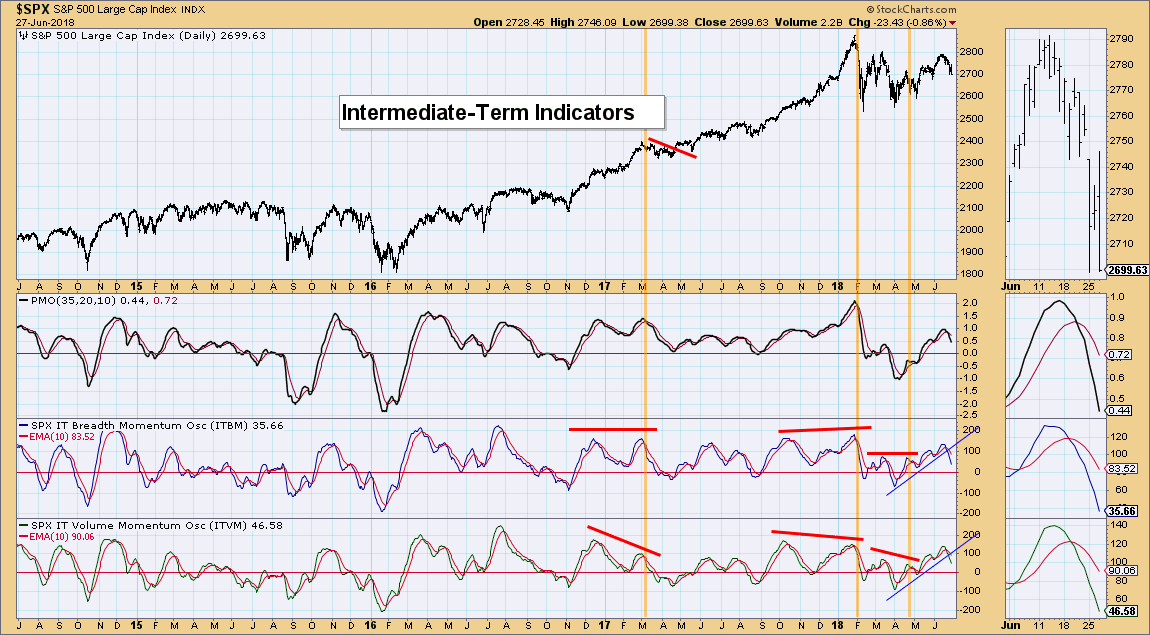 Conclusion: Indicators and Scoreboards are pointing to more downside or at best consolidation. Reevaluate your stops. While this is the perfect time for the market to rally, indicators are not supporting it. It couldn't hurt to err on the side of caution right now.

UUP Daily Chart: The Dollar exploded today with a big breakout to reach another annual price high. This chart is very positive. The PMO turned up today, lining up a bullish confirmation between its bottoms and price bottoms. OBV and SCTR look quite healthy. Let's look at the longer-term picture to seek price targets for UUP. 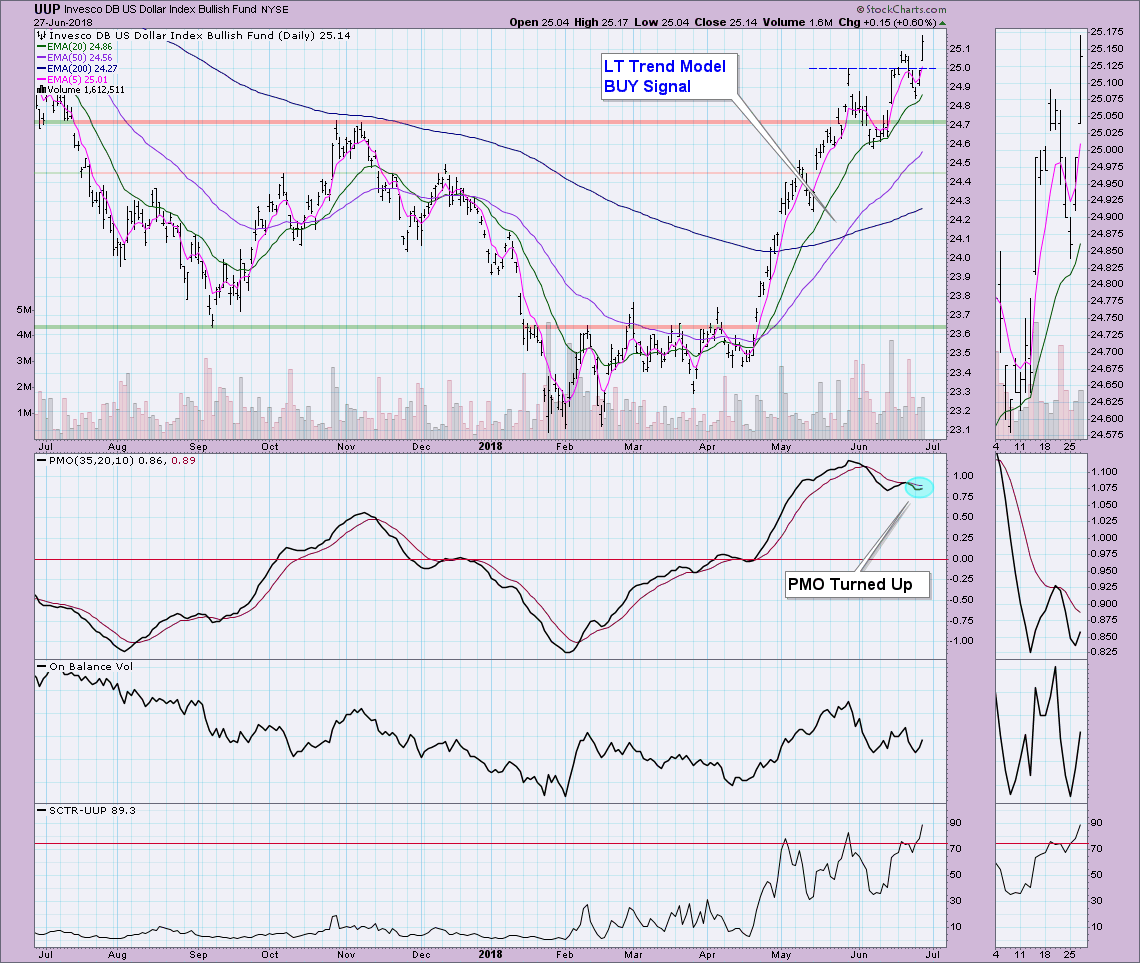 Before we look at price targets, just look at the PMO rising strongly and the 17-week EMA crossing above the 43-week EMA--very bullish configuration. That said, the first are of overhead resistance I would look for is at $25.25. Given the surge this week, I believe price will not have much difficulty in breaking above. The new area of significant resistance would be at the 2010 high. Note that that resistance line matches up with gap resistance. Gaps generally close or are covered by future price action, and I'm looking for this one to close too. 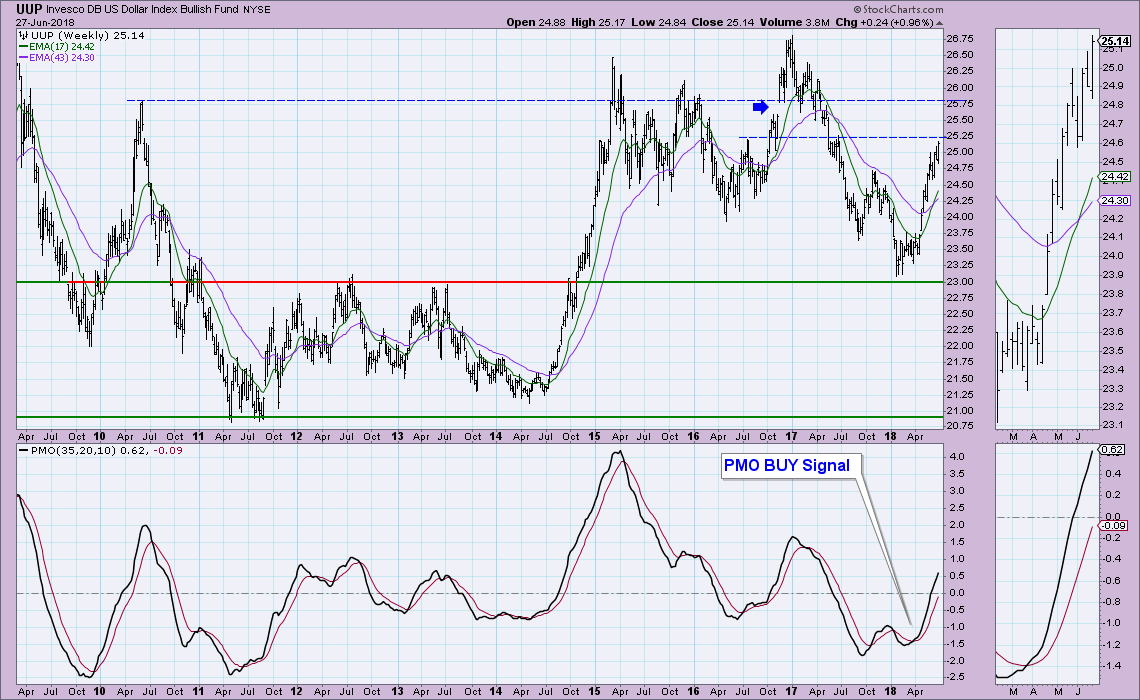 GOLD Daily Chart: The intermediate-term correlation of Gold to the Dollar is very negative. While not a perfect inverse correlation, it is close. I've not been a fan of Gold for some time and I'm not switching that mindset. The Dollar looks very strong and this will not help Gold. The PMO has already overtaken its last bottom and a Long-Term Trend Model SELL signal triggered last week. Trend Model EMAs are configured as negatively as possible. Generally an area of safety in an uncertain market, it hasn't proven itself safe right now. 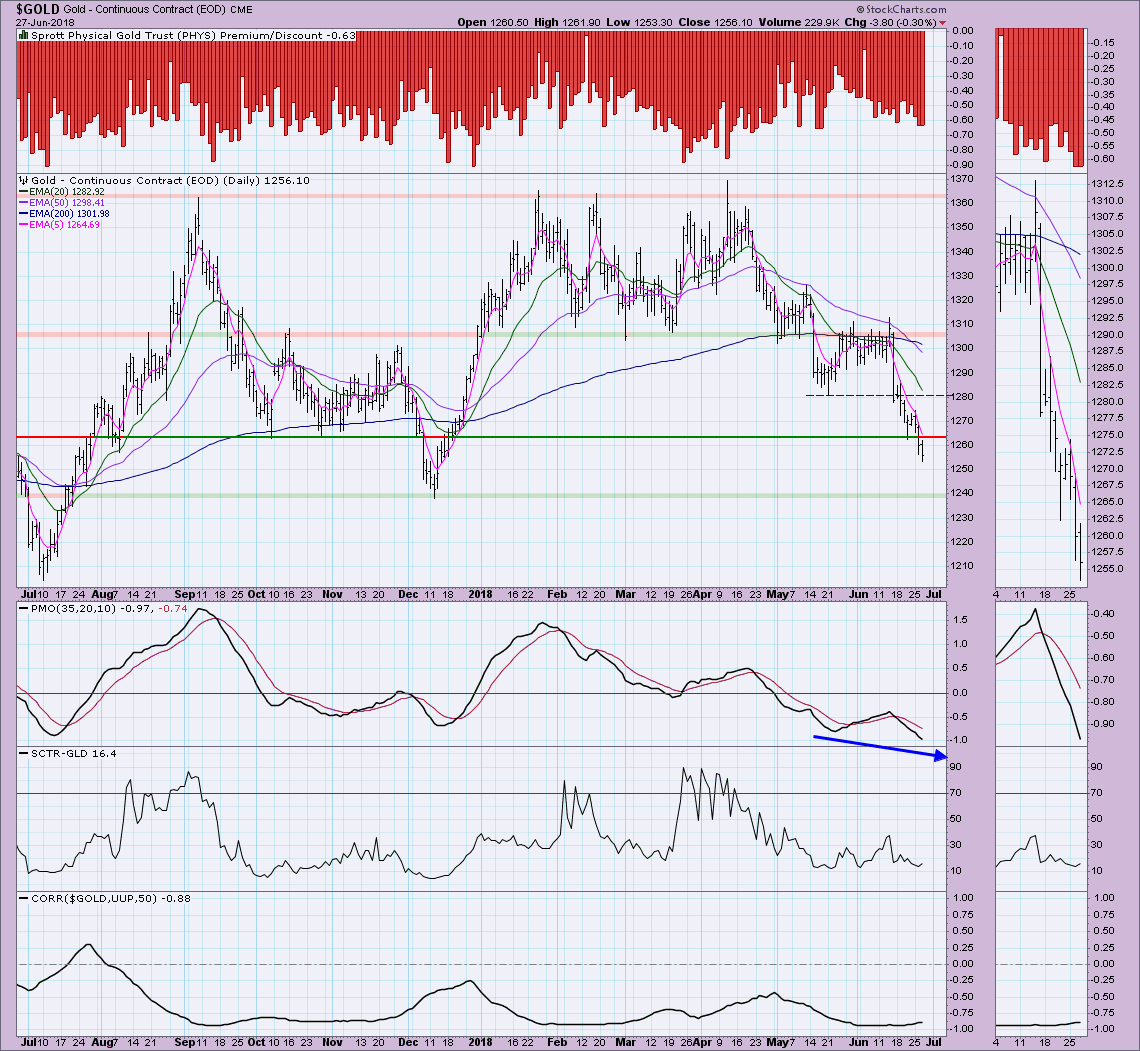 USO Daily Chart: Oil is kicking it! Yesterday's breakout came promptly after Monday's PMO BUY Signal and yesterday's IT Trend Model BUY signal. Price did close below the May top, but it didn't put in another multi-year high. $WTIC closed right on resistance. The indicators are still very bullish, I'd expect this to run higher given today's likely runaway gap on the open. 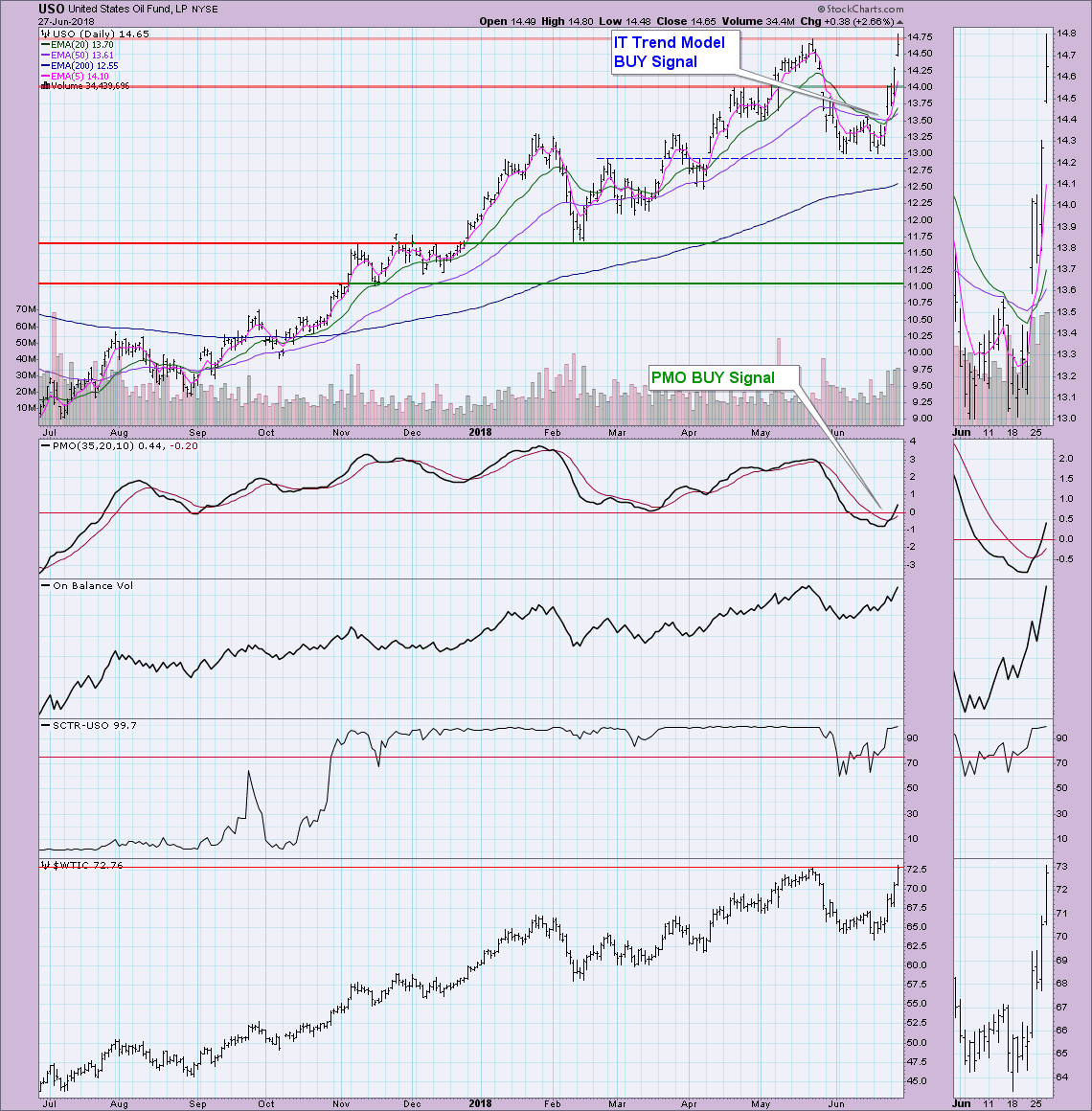 The next area of resistance for USO is at $16.00. The IT PMO hasn't quite triggered a BUY signal but if this rally continues it'll come on Friday. Upside potential for $WTIC is $90/barrel. 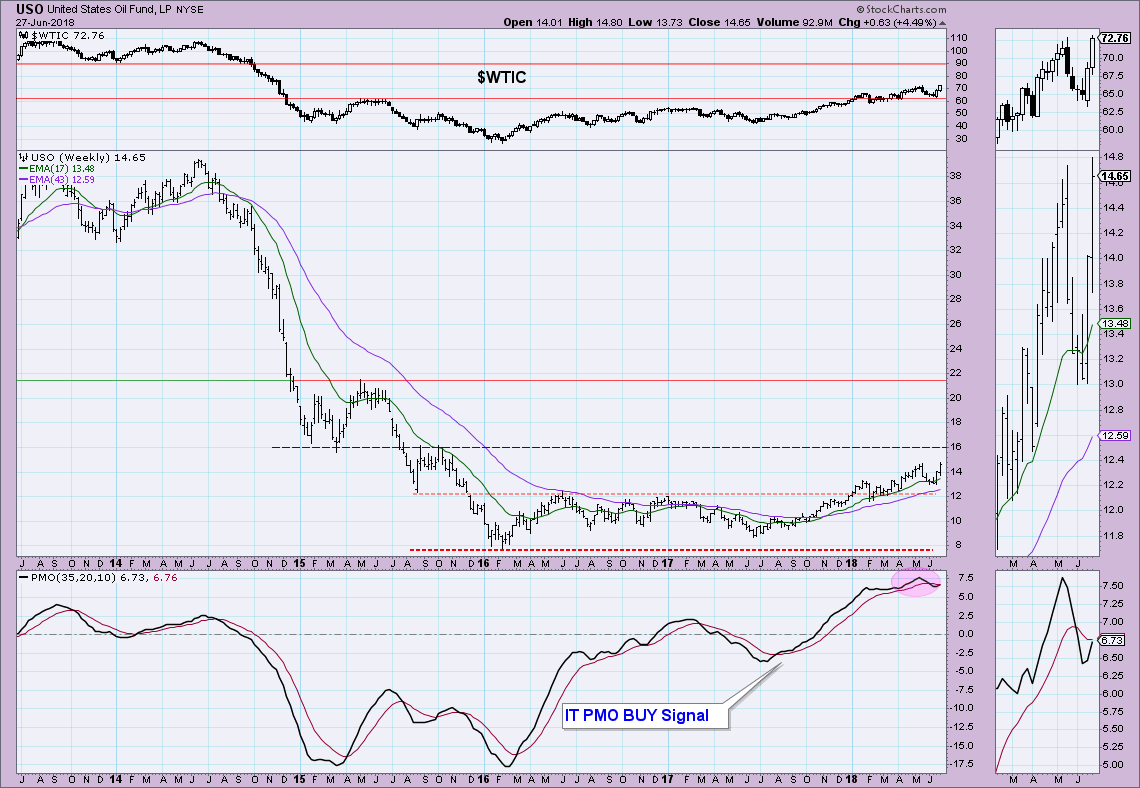 TLT Daily Chart: With treasury yields lower, Bonds enjoyed a big rally. I've adjusted the resistance level based on the previous top in May and bottoms formed in late 2017. The PMO is not overbought. The OBV and SCTR are rising nicely as well. We still are technically in a bear market for Bonds (50-EMA < 200-EMA), so while I would look for a breakout above this resistance level, I can't count on it based on bear market rules which suggest poor probability for bullish conclusions. 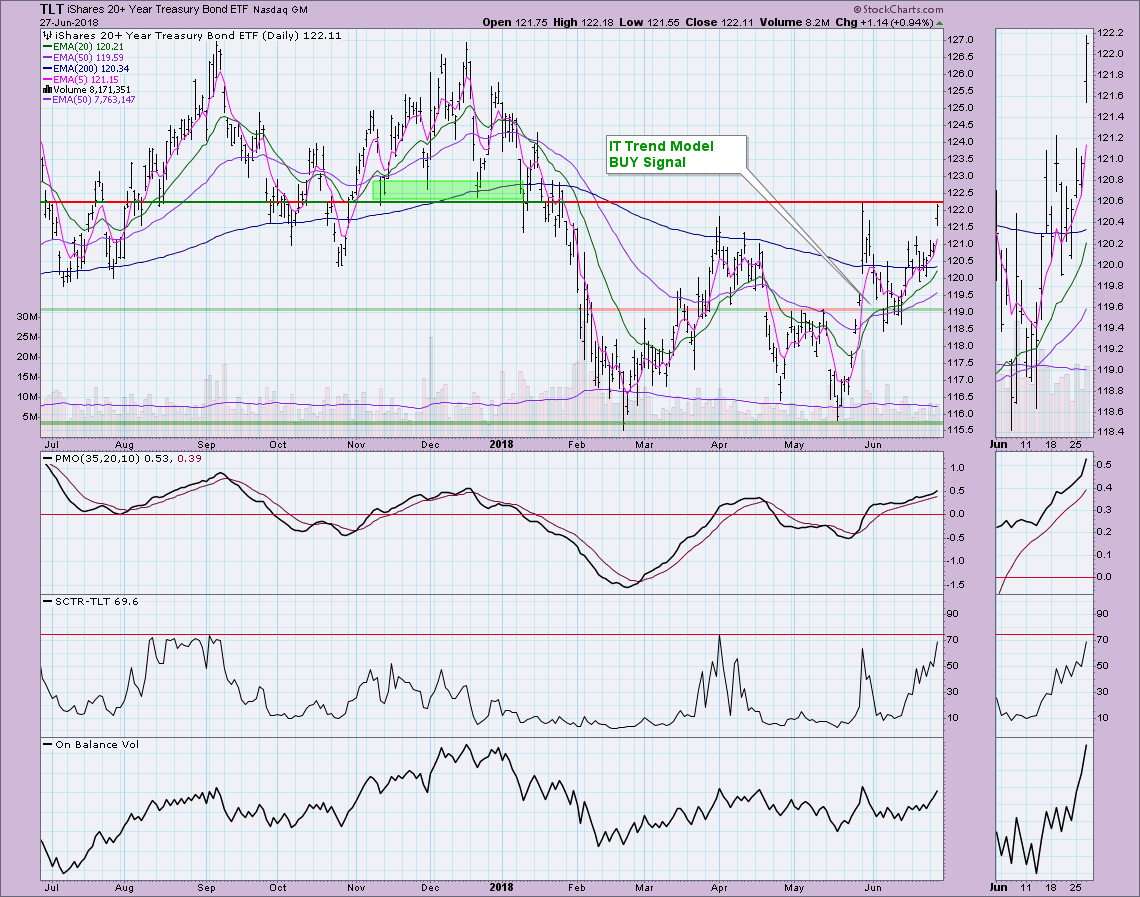