The market has been turned back from the horizontal resistance drawn across the March top, but it has managed to stay above the support drawn across the May tops. However, there is still the mechanism of the bearish rising wedge pattern, which is reinforced by an OBV negative divergence, and the PMO SELL signal. This setup is not immutable, but, as it stands right now, the evidence is saying to look for more downside. Let's see how that might get. 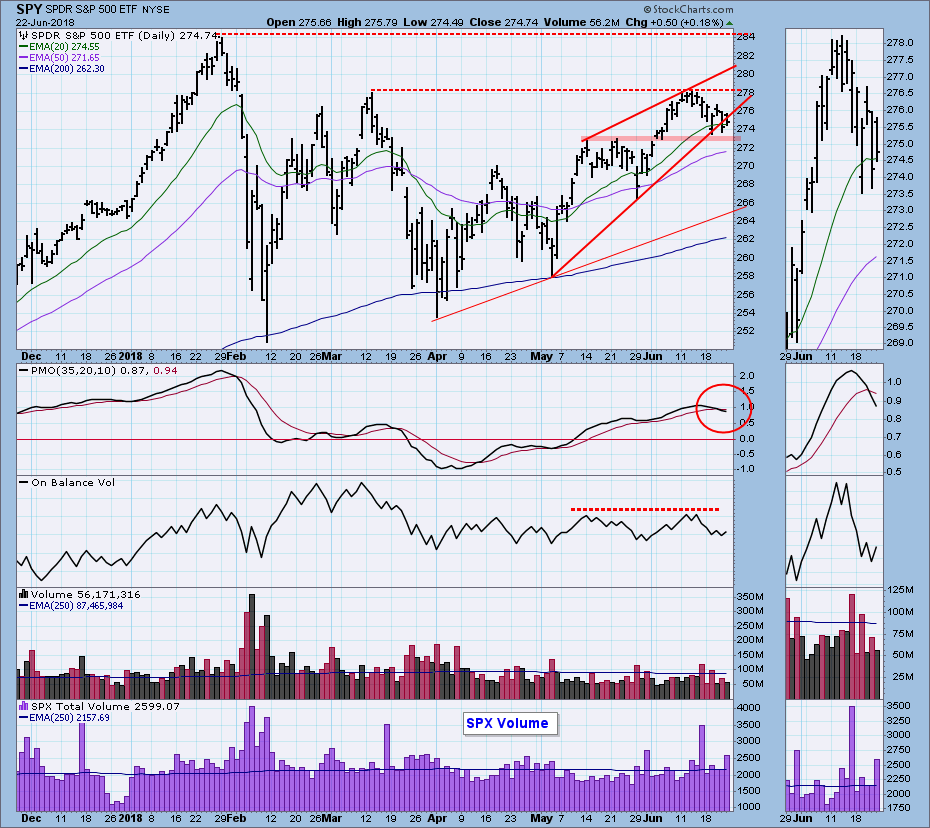 The DecisionPoint Weekly Wrap presents a succinct end-of-week assessment of the trend and condition of the stock market (S&P 500), the U.S. Dollar, Gold, Crude Oil, and Bonds. 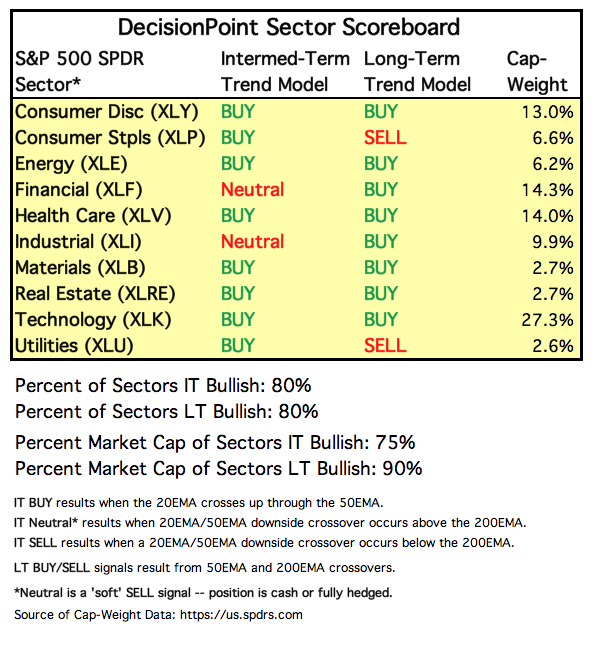 SPY Daily Chart: Not really anything to add to what I said above. 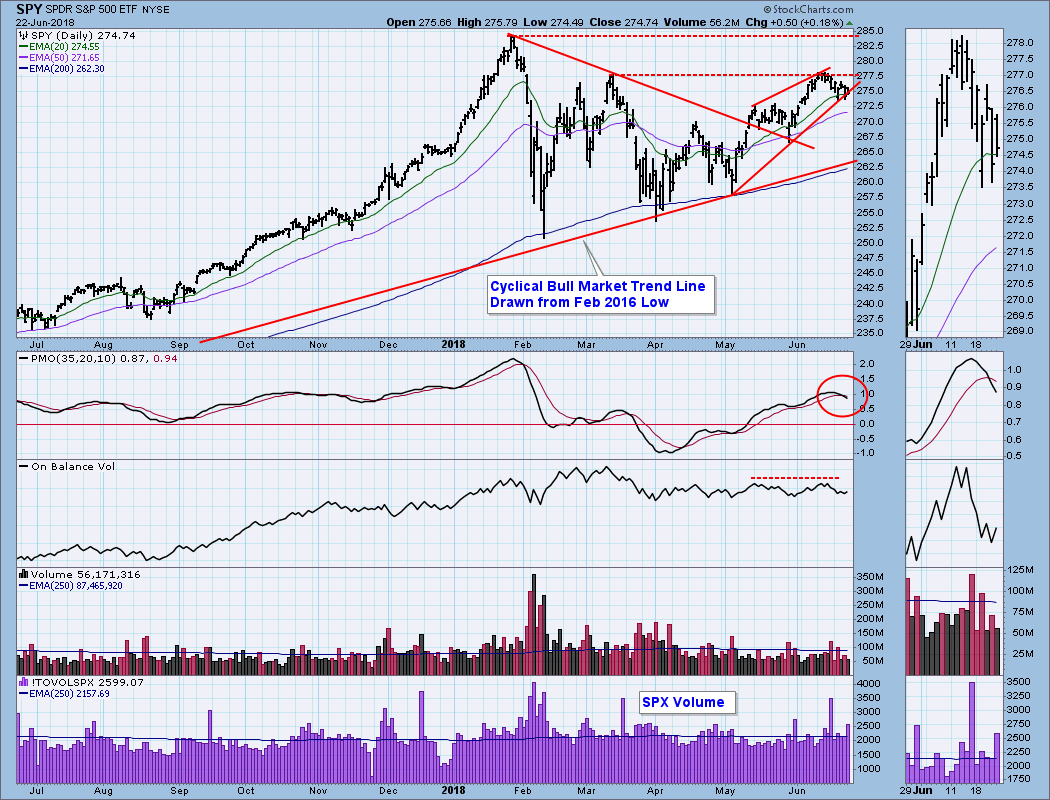 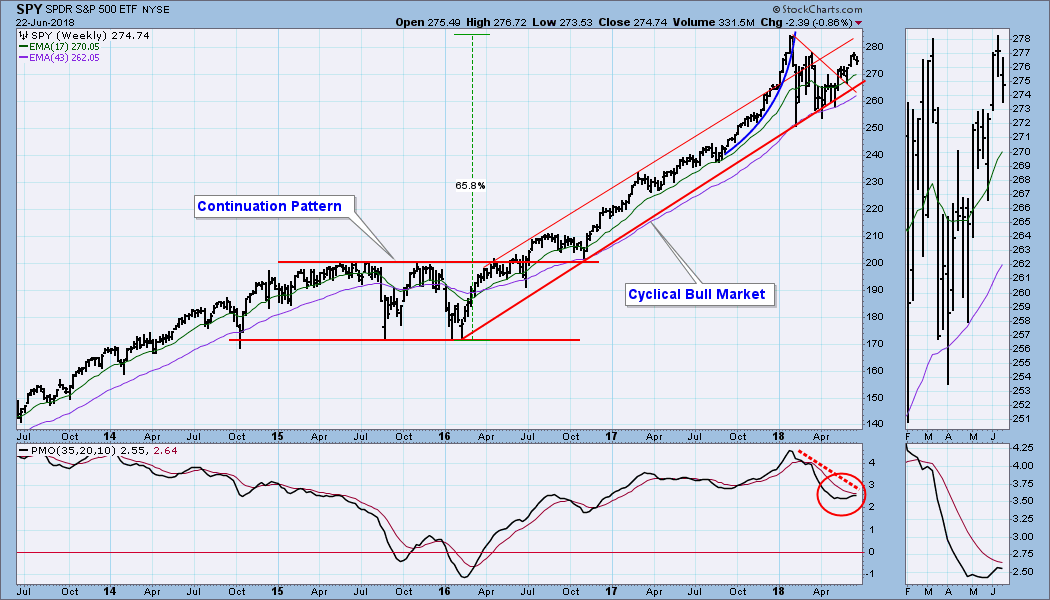 Short-Term Market Indicators: The STO-B and STO-V are slightly oversold, about where they were about a month ago. 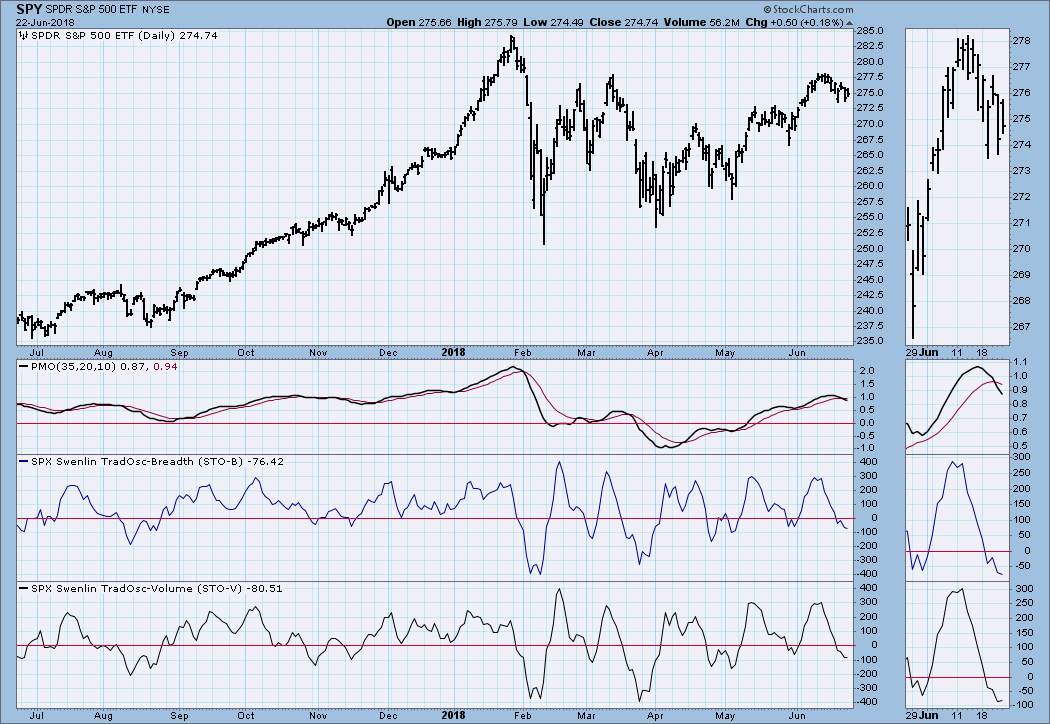 Intermediate-Term Market Indicators: The ITBM and ITVM are below their signal lines and falling. They are somewhat overbought and allow for a good sized price decline; however, they have already declined about the same amount as the declines from the two prior indicator tops, and we could make a case that the current decline has hit a cycle low. 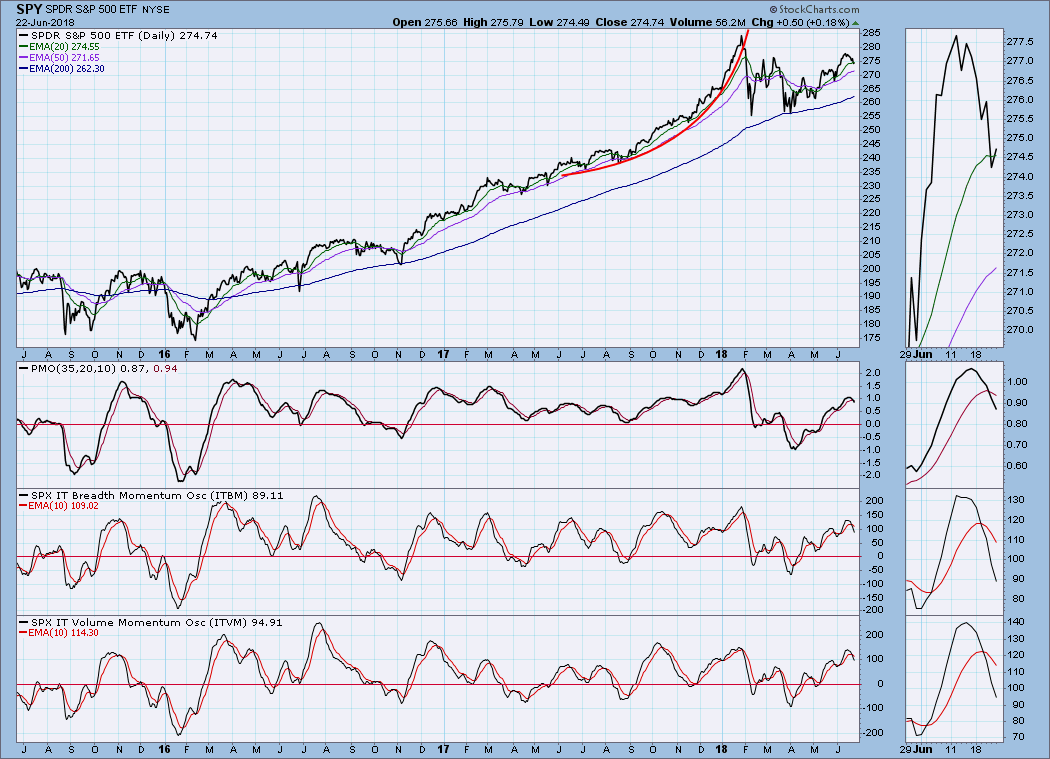 Conclusion: April and May saw short-term tops that resulted in minor pullbacks. Now we have just experienced a pullback that looks a lot like the previous two, and we could make a case for the pullback having run its course. Nevertheless, there is something a little different about this top -- our three primary indicators on the chart above were more overbought this time, so maybe the third time is charmed. If we get a bounce and the daily PMO bottoms, I will assume that the short correction is over. Otherwise, a breakdown from the rising wedge is most likely.

UUP Daily Chart: UUP has topped, and a daily PMO negative divergence has appeared, so I'm looking for the decline to continue for a while. 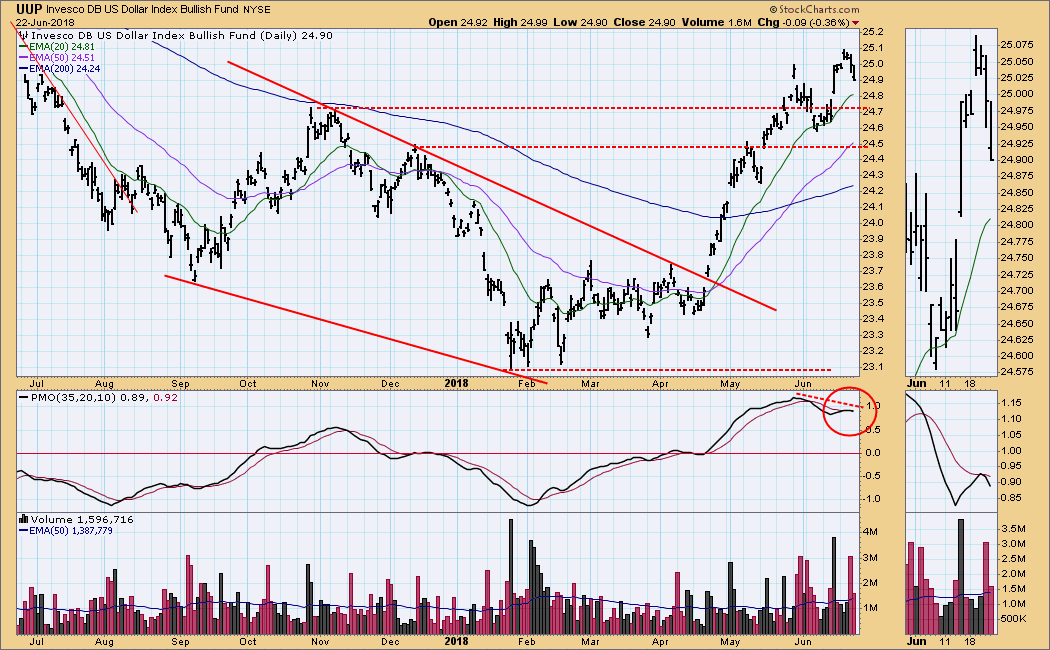 UUP Weekly Chart: This week's reversal is the only negative issue in this time frame. 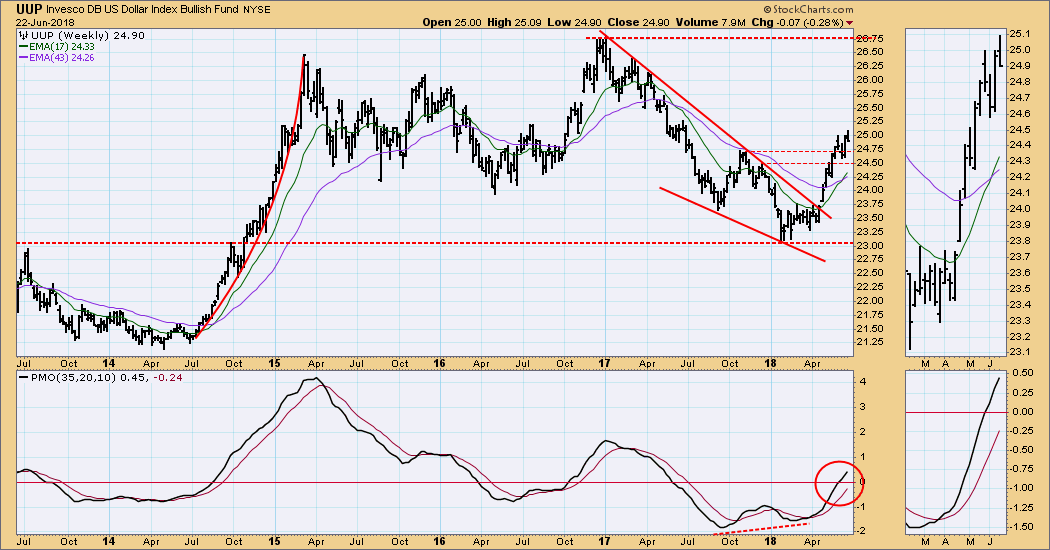 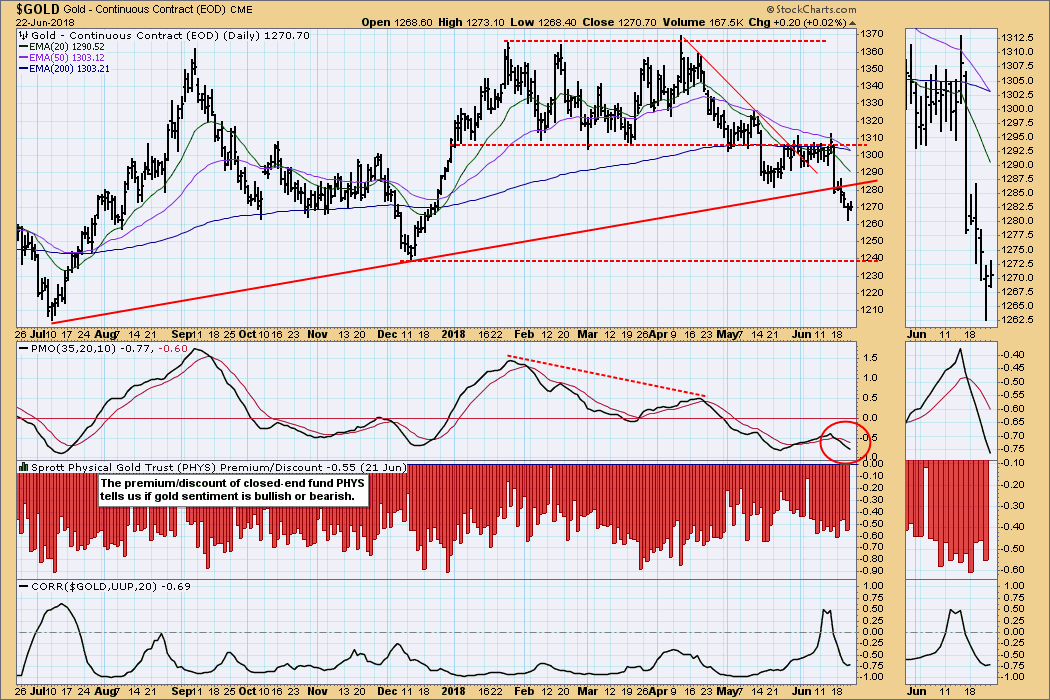 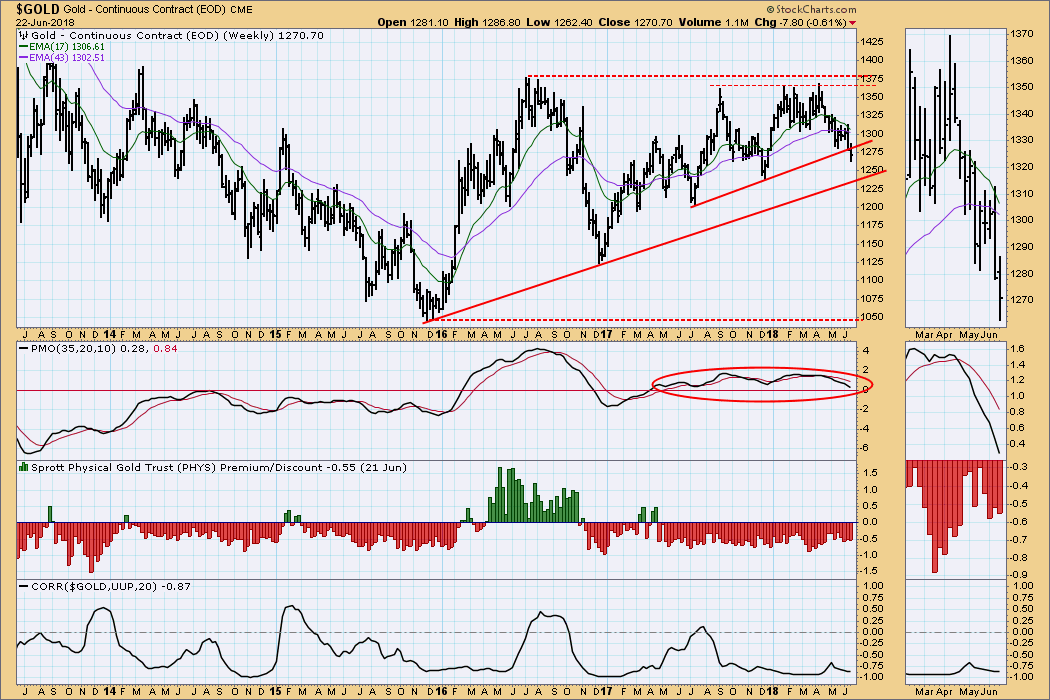 USO Daily Chart: On Friday OPEC announced an increased production target, but it was not as high as expected. As a result, crude decisively shot out of a double bottom formation. If there is follow through next week, a new IT Trend Model should result. Important horizontal resistance is overhead at 16.00. 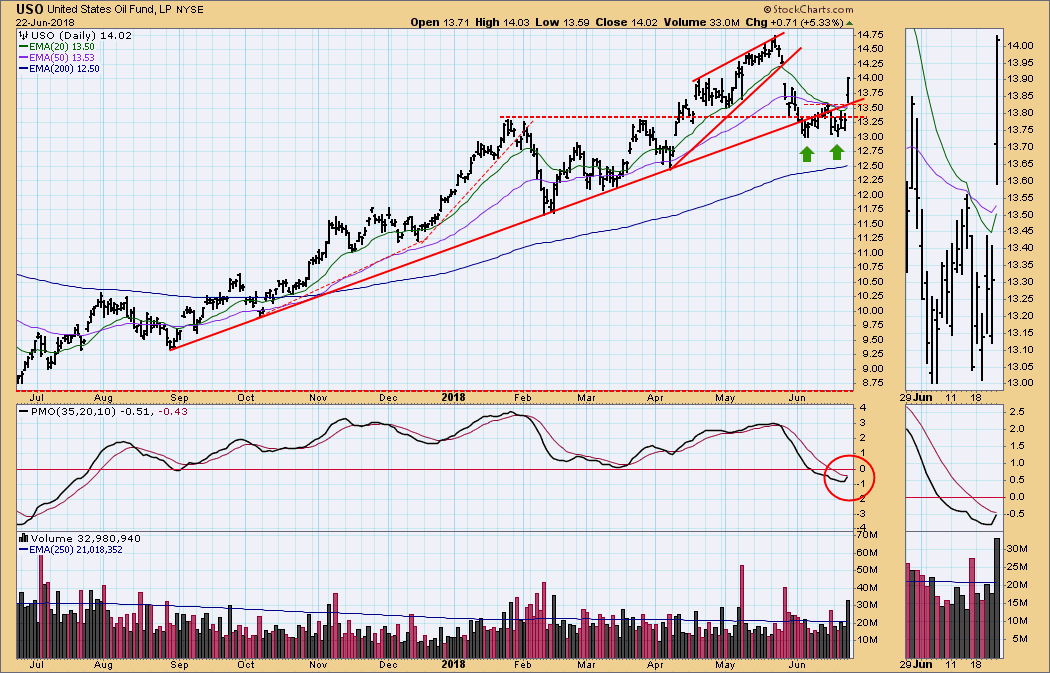 USO Weekly Chart: In this time frame the rising trend channel has been maintained, and the weekly PMO turned up. The fact that the PMO is so overbought makes me wonder it the OPEC effect will persist or if it is just a flash in the pan. 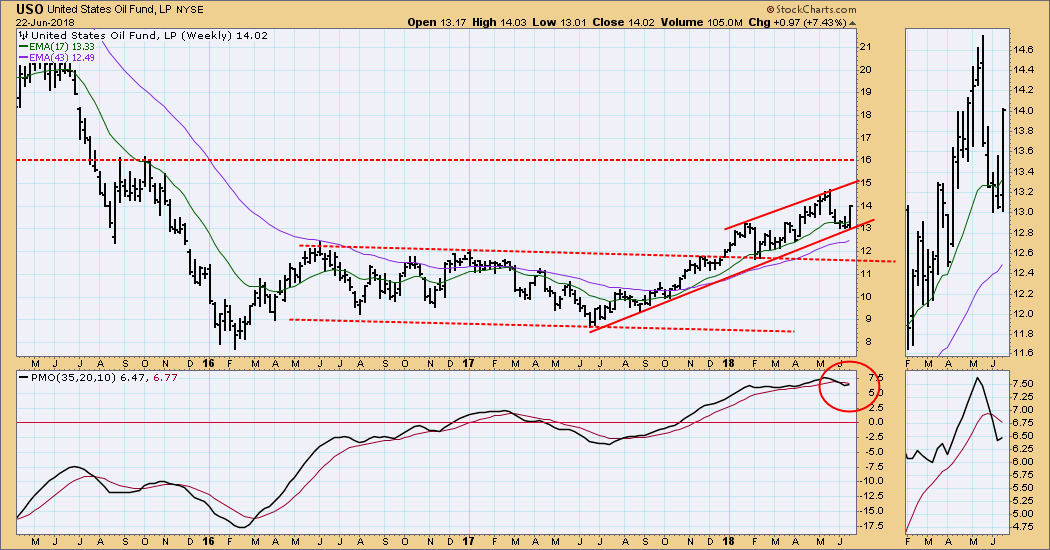 TLT Daily Chart: The rapid advance in May has been followed by a period of churning, and the daily PMO has been flat to slightly rising. 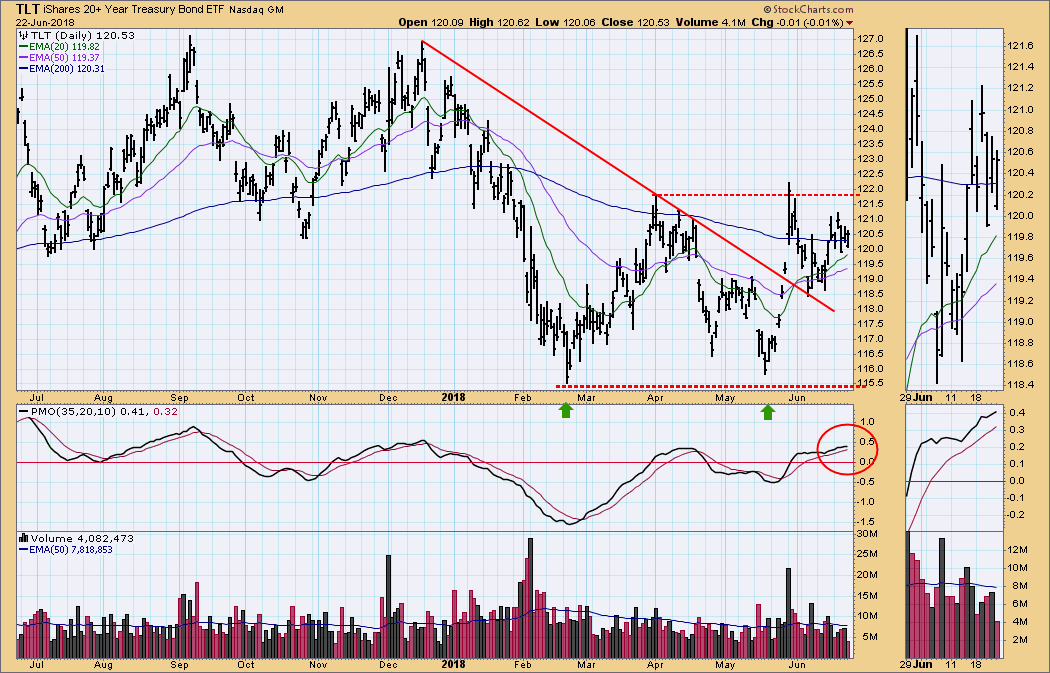 TLT Weekly Chart: The shorter-term double bottom seems about to hijack the longer-term head and shoulders pattern. Primary evidence for this conclusion is that the weekly PMO has crossed up through the signal line. A similar double bottom outcome can be seen in the first part of 2017. Having said that, I must caution that similar setups do not necessarily result in similar outcomes, but it is reasonable to anticipate a similar outcome until evidence to the contrary appears. 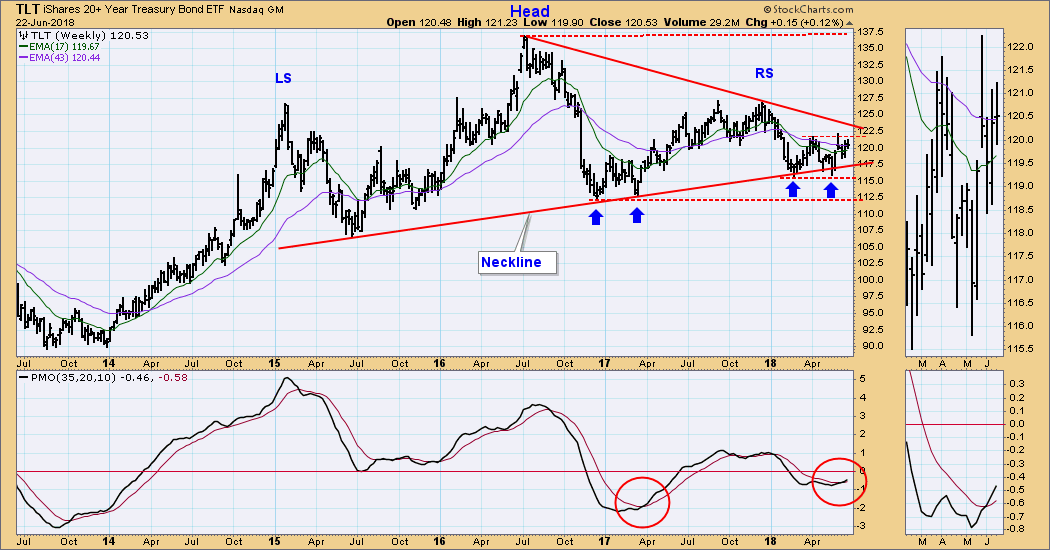