A lot of people are seeing a reverse head and shoulders pattern developing, and it is really not hard to spot. From Friday's close, it will take a rally of a little less than 3% for price to reach the neckline. Add another 4.5% and new, all-time highs will be made. Some indicators favoring a positive resolution are: (1) contracting volume across the head and right shoulder; (2) the OBV reverse divergence; and (3) the PMO is confirming by bottoming above the signal line. Some negative factors are: (1) the bull market trend line has been broken; (2) the formation is too close to the all-time high to represent a trend reversal; and (3) any formation is less likely to resolve favorably in a bear market. 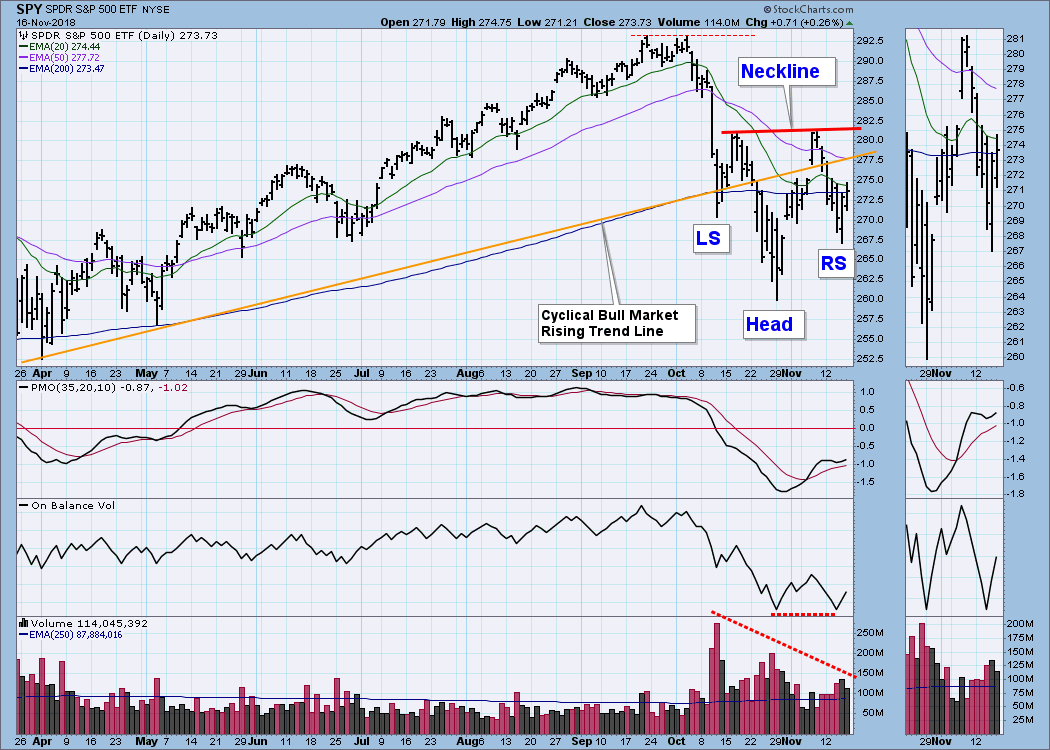 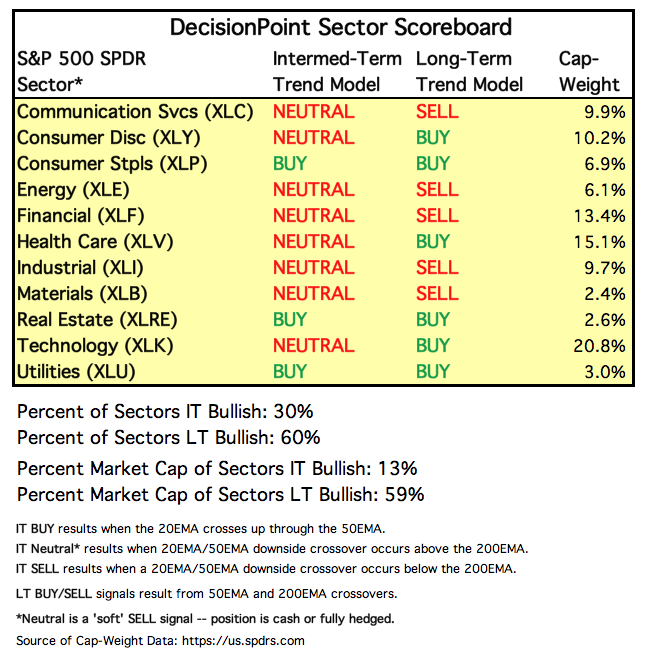 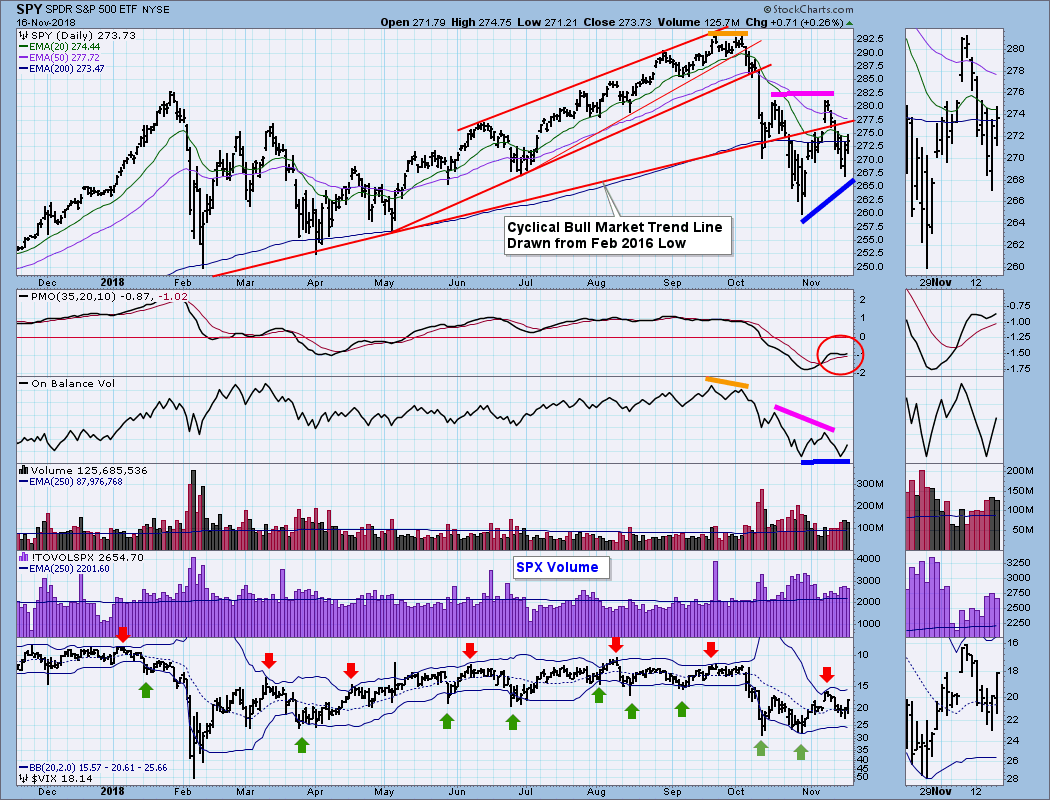 SPY Weekly Chart: This week there was no repeat of last week's failed attempt to recapture the cyclical bull market rising trend line, and the weekly PMO is declining doggedly. 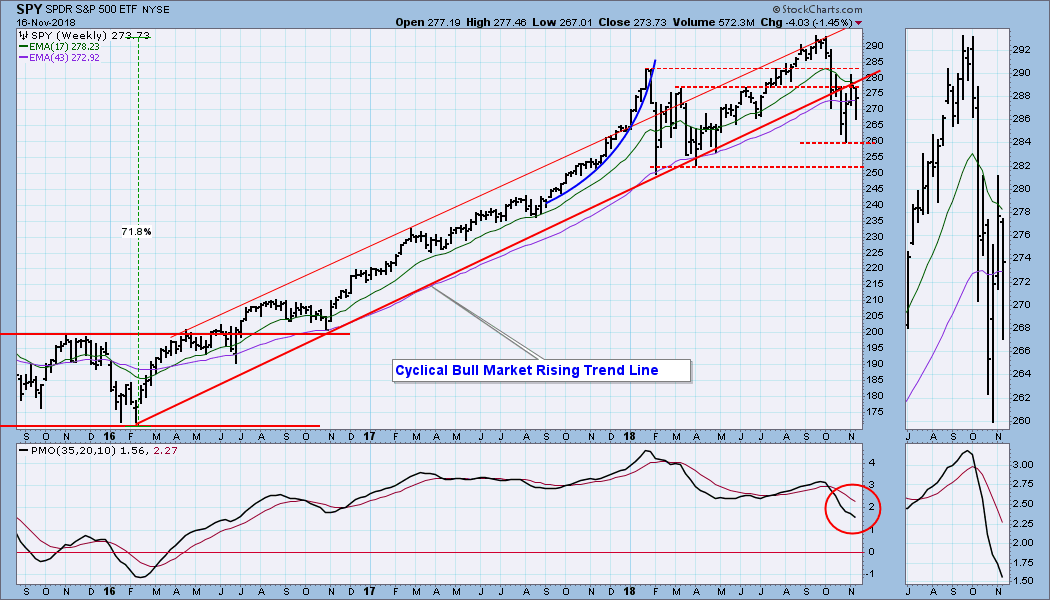 Short-Term Market Indicators: The STO-B and STO-V have bottomed and were sufficiently oversold to accommodate a modest rally.

Intermediate-Term Market Indicators:  I'm expecting another leg down, and there is nothing here that would oppose that outcome. Of course, if you had a the opposite expectation, there's plenty of room for that too. 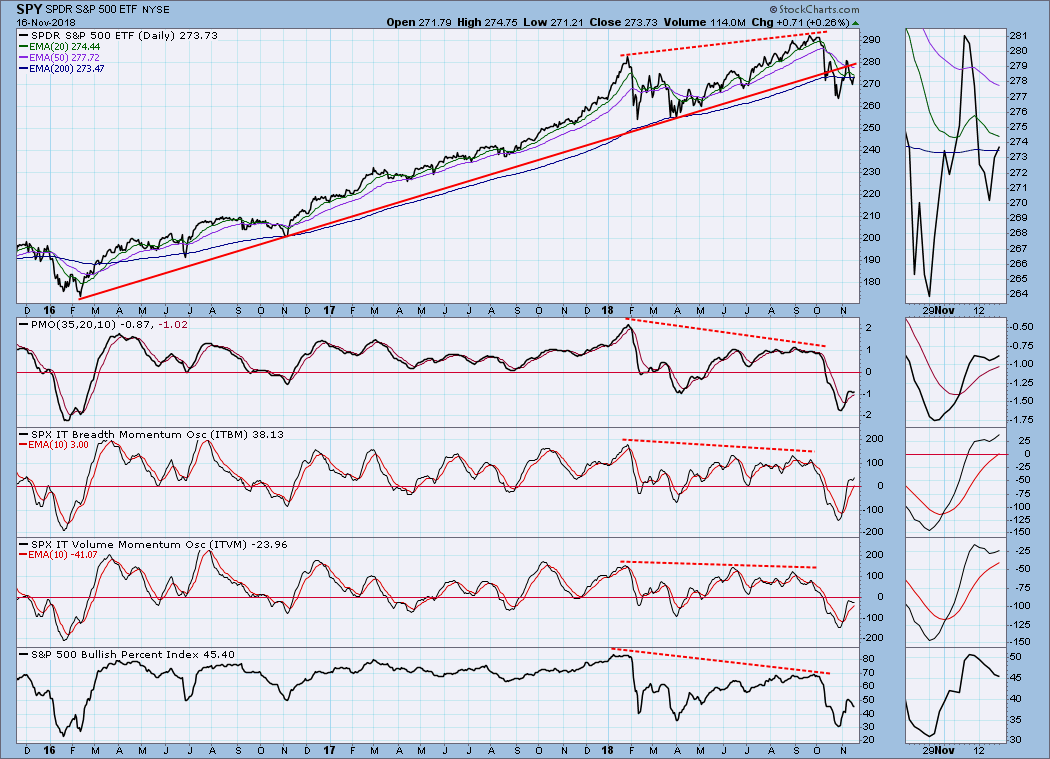 CONCLUSION: The title of a recent Arthur Hill article was The First Death Crosses Appear -- meaning that the 50DMA has crossed down through the 200DMA. He was, of course, referring to some of the major market indexes, but indexes tend to lag most of their component stocks, thanks to their cap-weighting. For example, while the S&P 500 itself is probably weeks away from a death cross, in actual fact, 47% of S&P 500 component stocks have had 50/200EMA death crosses. This is one reason that I believe we're in a bear market. Another is the fact that the bull market rising trend line has been broken.

Bull or bear? Why does it matter? Well, case in point is the reverse head and shoulders pattern we're looking at right now. If we are still in a bull market, chances are that formation will resolve upward. If, as I believe, we are in a bear market, it is more likely that that bullish pattern will fail and resolve downward. The primary trend applies its bias to everything.

Next week is a short one, thanks to Thanksgiving Day and the shortened trading on Friday. 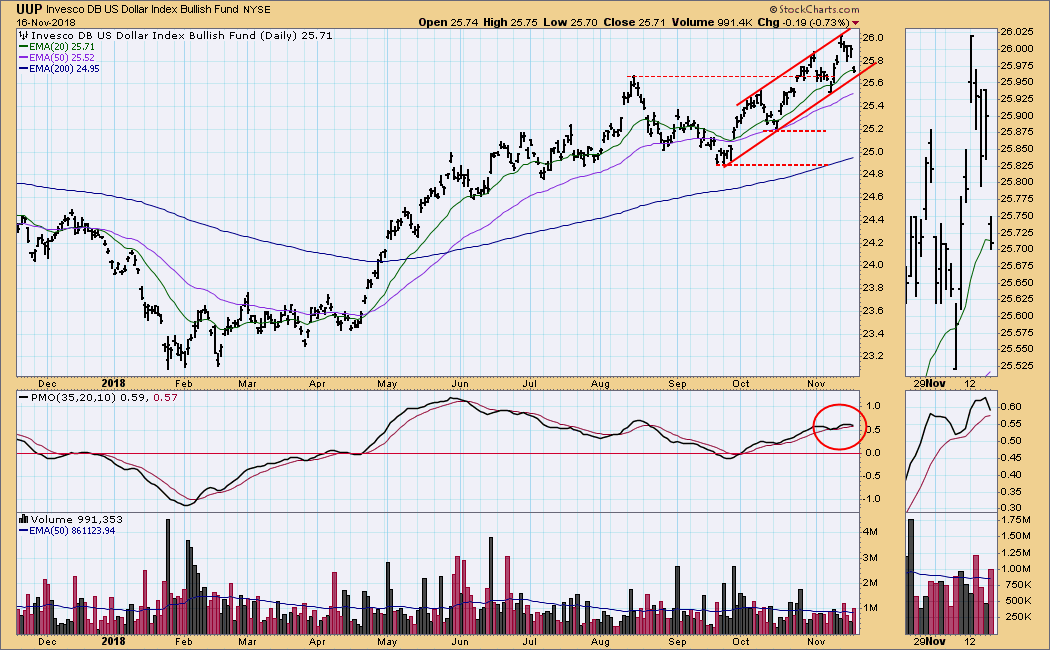 UUP Weekly Chart: The top of the rising wedge was challenged this week, but UUP closed below that line, leaving the wedge dynamics (expectation of a break down) in place. 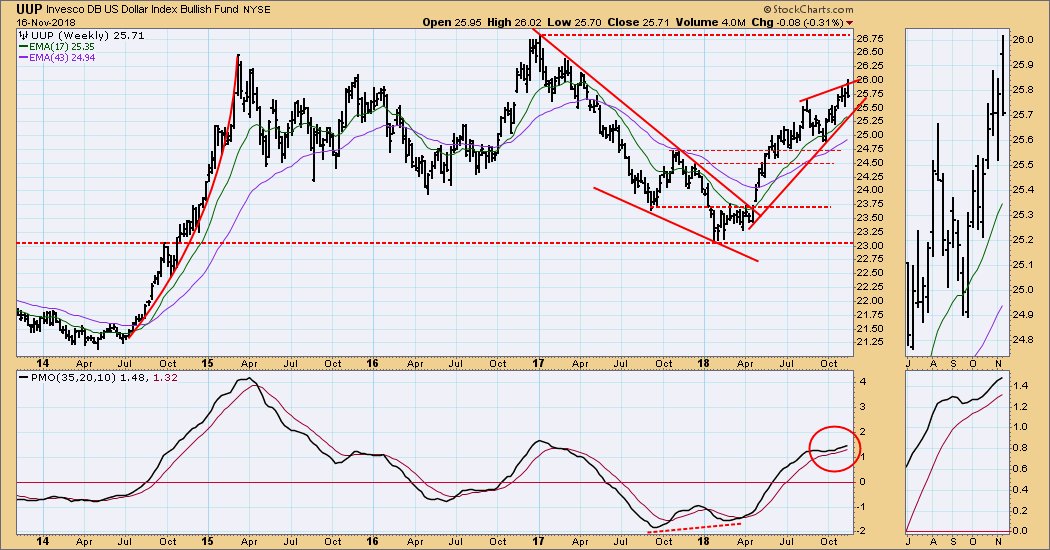 GOLD Daily Chart: As you can see by the recent proximity of the 20EMA and 50EMA, gold came to within a hair of generating a new IT Trend Model SELL signal this week; however, on Friday gold rallied above those EMAs, narrowly missing a possible whipsaw signal. If price remains above the EMAs, they will keep rising and diverging.  Important to note, gold has found support on the rising trend line drawn from the August low. Also, I think there may be reason to get a little more bullish on gold because of sentiment. (See below.) 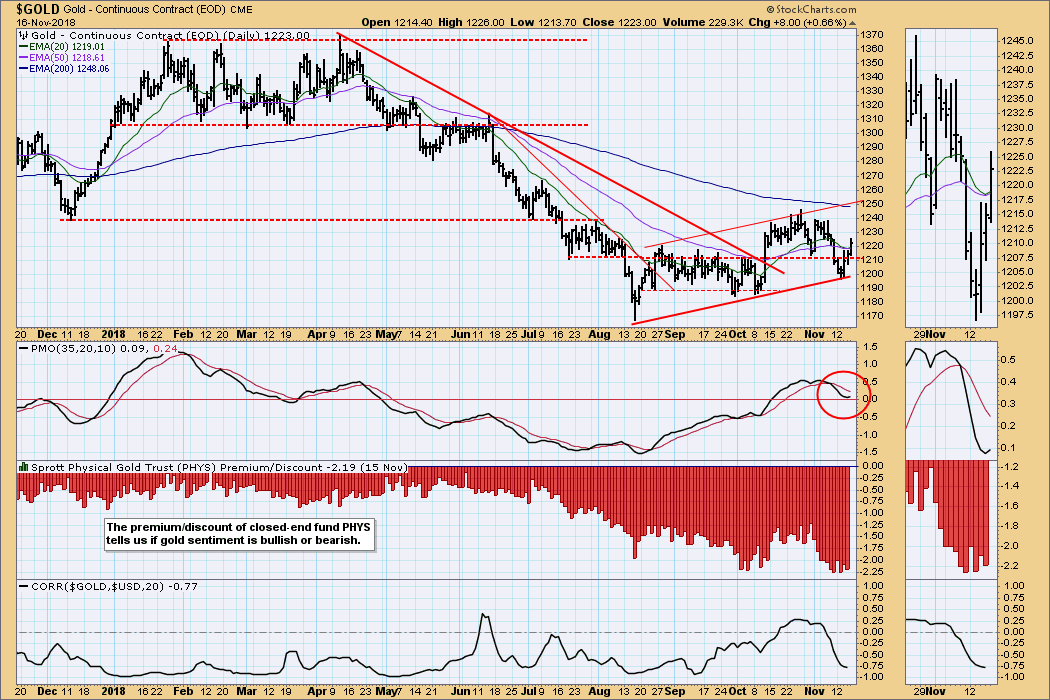 GOLD Weekly Chart: To begin, closed-end funds can sell at a premium or discount to their net asset value (NAV), and we have about nine years of premium/discount data on the closed-end fund Sprott Physical Gold Trust (PHYS). We use that data to gauge gold sentiment -- premium readings show bullish sentiment, and discount readings show bearish sentiment. We are taught to think of sentiment as being a contrary indicator, but that is not always the case. It is only contrary within a certain context. For example, if gold is trending up, we should expect sentiment to be positive, and vice versa. It is when it becomes 'excessively' positive (or negative) that it becomes contrarian. Current conditions provide us with a good example.

Compared to the previous record discounts in 2013, which was well into the gold bear market, discount readings since September are by far the deepest in nine years. Considering the price improvement since the 2016 bear market low, I'm starting to think that bearish sentiment regarding gold is excessive and that it has become a contrary indicator. This is positive for gold. 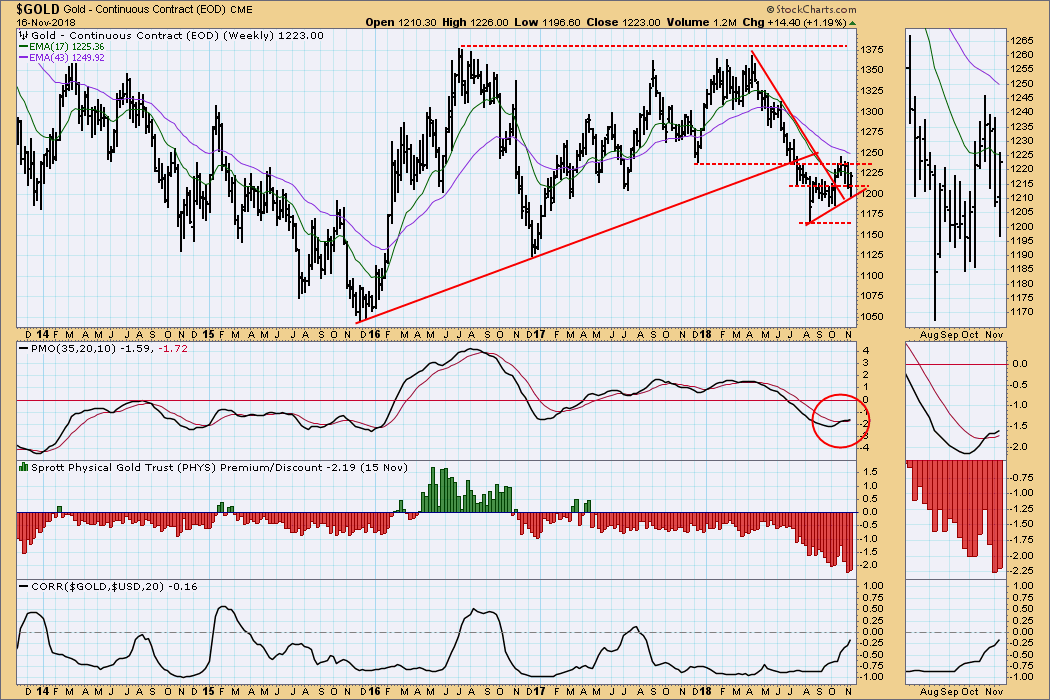 USO Daily Chart: Last week USO broke down through support. On Monday there was a brief snapback to the point of breakdown, but ultimately price dropped down about -10% from the previous support line. The decline from the October top has been about -28%. 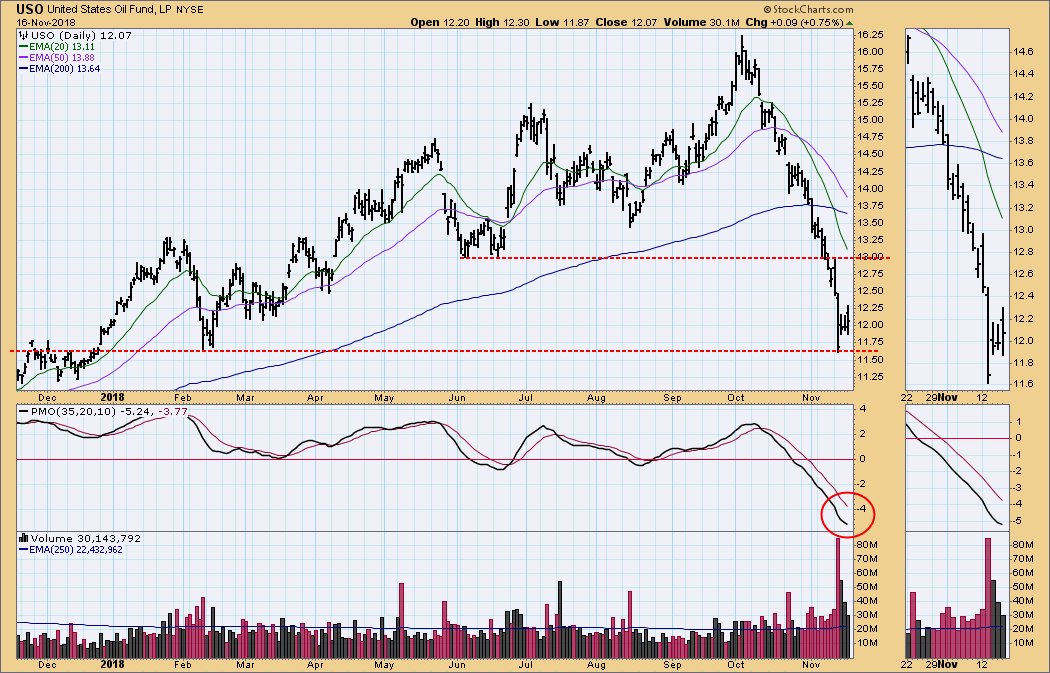 USO Weekly Chart: In this time frame we can see that both USO and $WTIC have reached fairly solid longer-term support lines. For some time I have believed that the range for crude would be about 55 to 76. That is a "best guess" estimate based upon the obvious technical signs. Also, it seemed unreasonable to me that crude would rally back to 100 or higher, given the more than adequate supplies available. 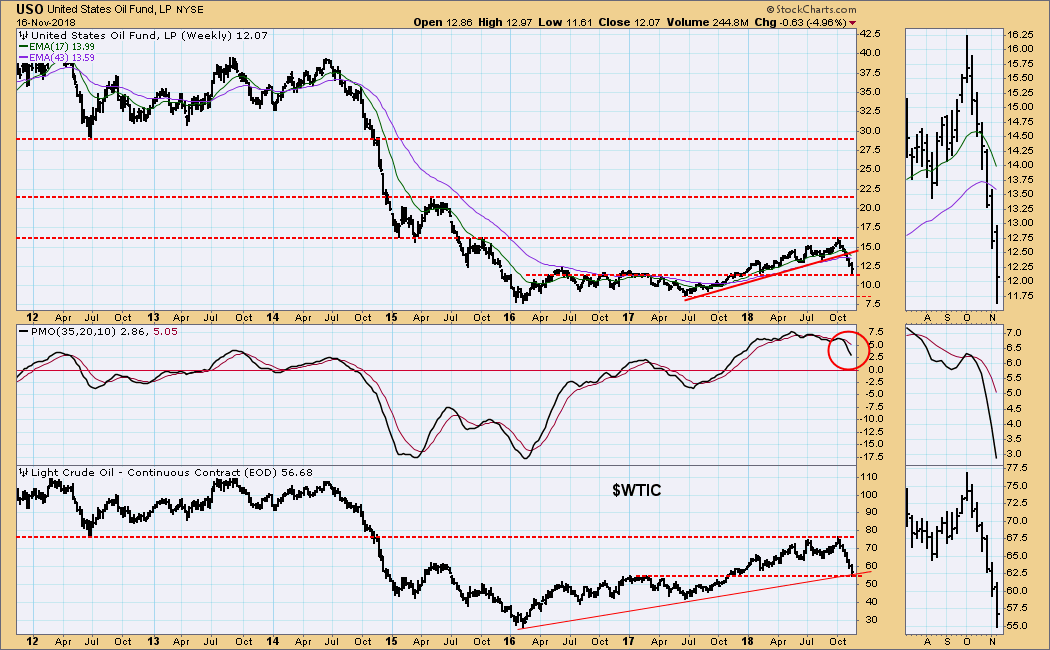 TLT Daily Chart: After breaking down through support in early October, TLT has been consolidating just below that support, which is now resistance. 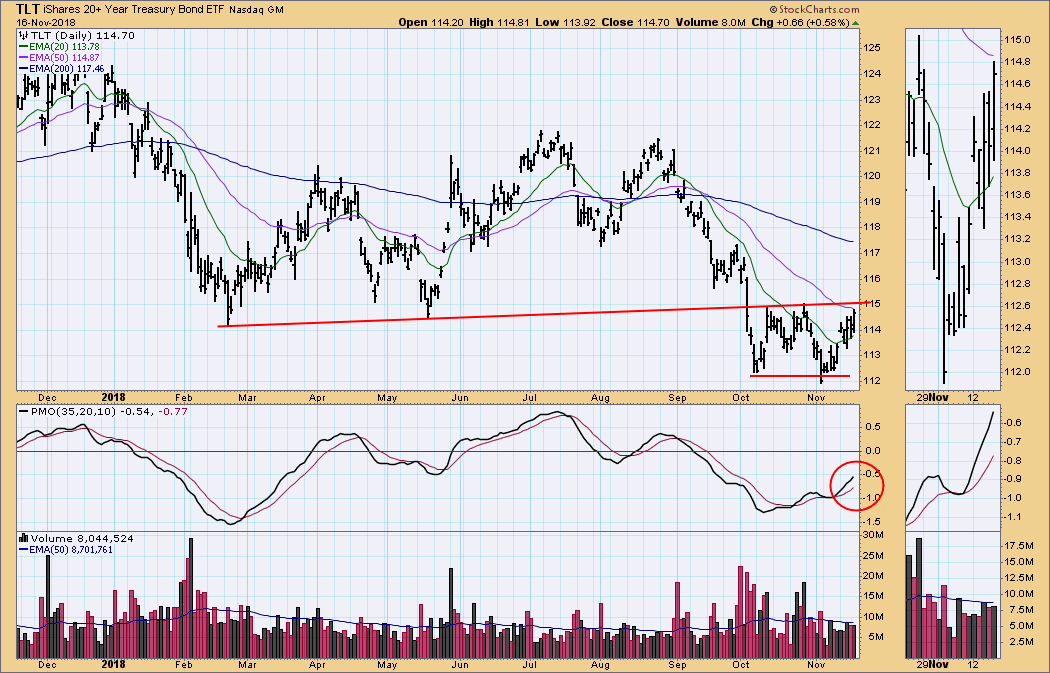 TLT Weekly Chart: A large head and shoulders formation has broken down, and the technical expectation is that price will eventually continue down to at least the minimum downside projection, which is equal to the distance between the top of the head and the neckline. 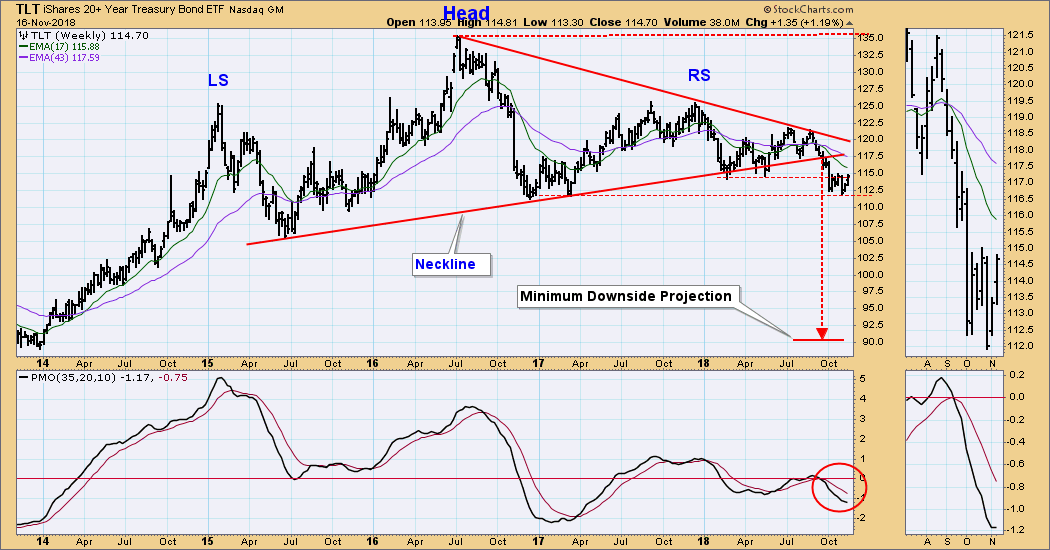