I usually spend my days at my desk noodling on the computer, reading, and casually watching business television with the sound off. (My idea of retirement.) With no sound to distract/annoy me, the most dangerous part of the TV watching is the endless stream of headline banners that announce why the market is doing whatever it is doing at a given moment. The danger comes from my usual eye-rolling reaction to most of the headlines, a reaction which can be so severe as to nearly flip me over the back of my chair. Once in a while there is no doubt that a certain news item, like Fed Chair Powell's remarks on Wednesday of this week, is directly responsible for a sharp market reaction, but most of the time the connections between news and price that the media attempts to make are just ludicrous. In his recent market commentary Dr. John Hussman (hussmanfunds.com) nailed it: "If a market collapse happens to fall on the same day that an organ grinder’s monkey throws a coconut at the bronze bull on Wall Street, they’re going to blame the crash on the monkey." On the chart below I have highlighted three big down moves attributed to things like "trade war fears", "investors concerned with global growth", and "speculation about the G-20". Nah, I think it was the monkey. 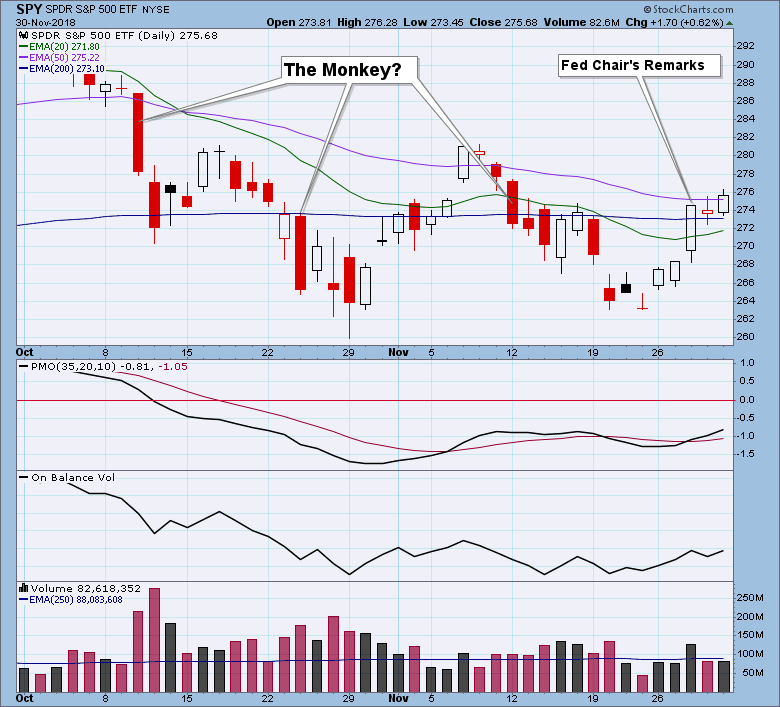 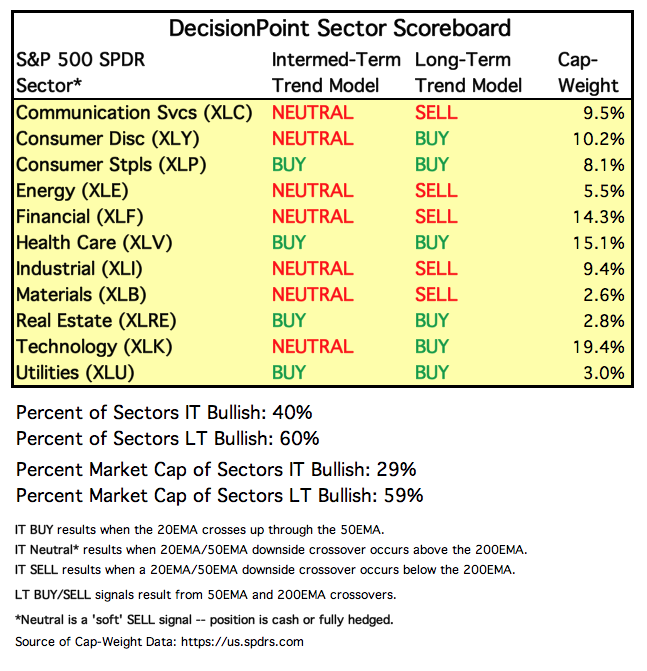 SPY Daily Chart: The market is in the middle of a one-year zone of horizontal congestion, which is obvious but defies clear definition of its limits. The most recent, dominant feature is the double bottom formed by the October and November lows. If we were to make a minimum upside projection implied by this formation, it would take the market to new, all-time highs; however, such a move would require the market to overcome the resistance from the bull market rising trend line, as well as the confirmation line drawn across the November high -- not to mention the October top. 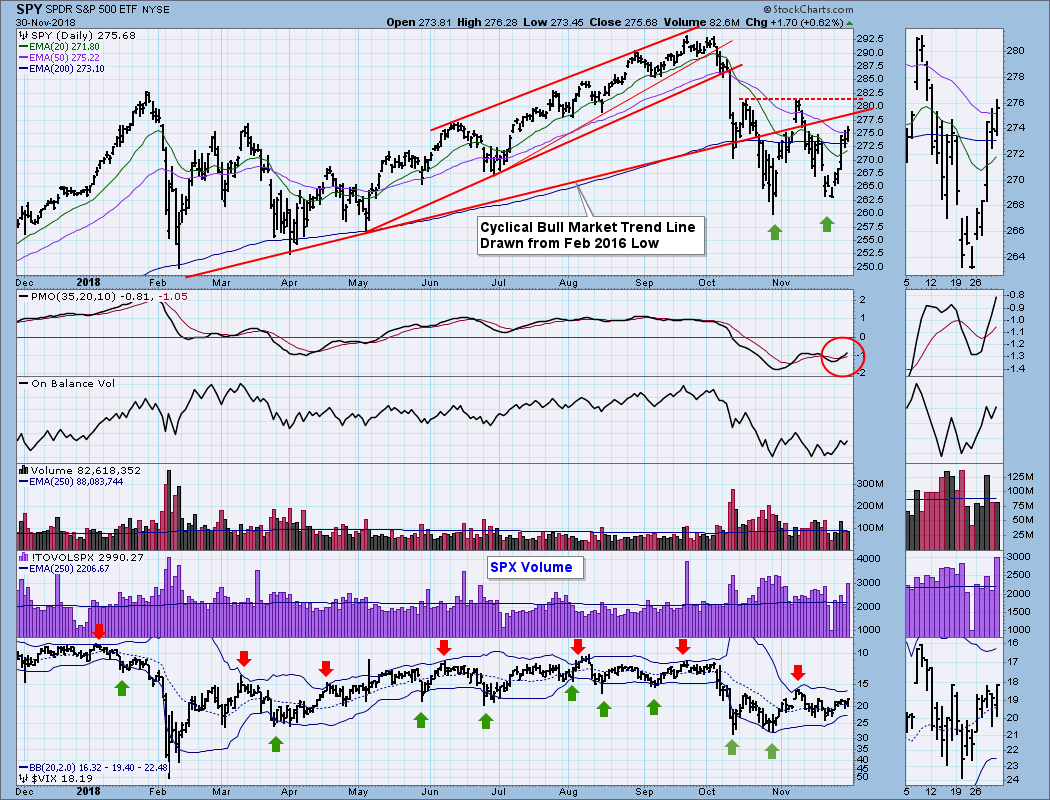 SPY Weekly Chart: The cyclical bull market rising trend line has been broken, and SPY is consolidating below the line. One has to wonder if we're seeing a repeat of the market action earlier this year -- a breakdown, consolidation, and rally to new highs. The decline of the weekly PMO has slowed, and I'll be interested to see it next week. 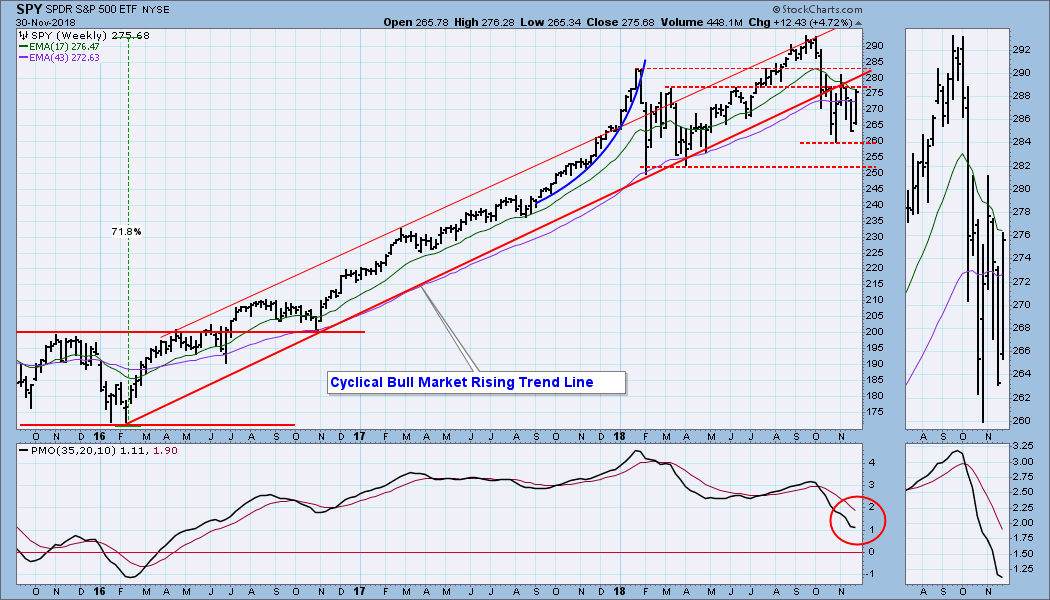 SPY Monthly Chart: SPY's departure from the secular bull market rising trend line reached about +39% this year, as opposed to a departure of only +26% in 2015. That kind of excess begs for a correction. The monthly PMO has topped and crossed down through the signal line. This typically forecasts a lengthy period of decline. 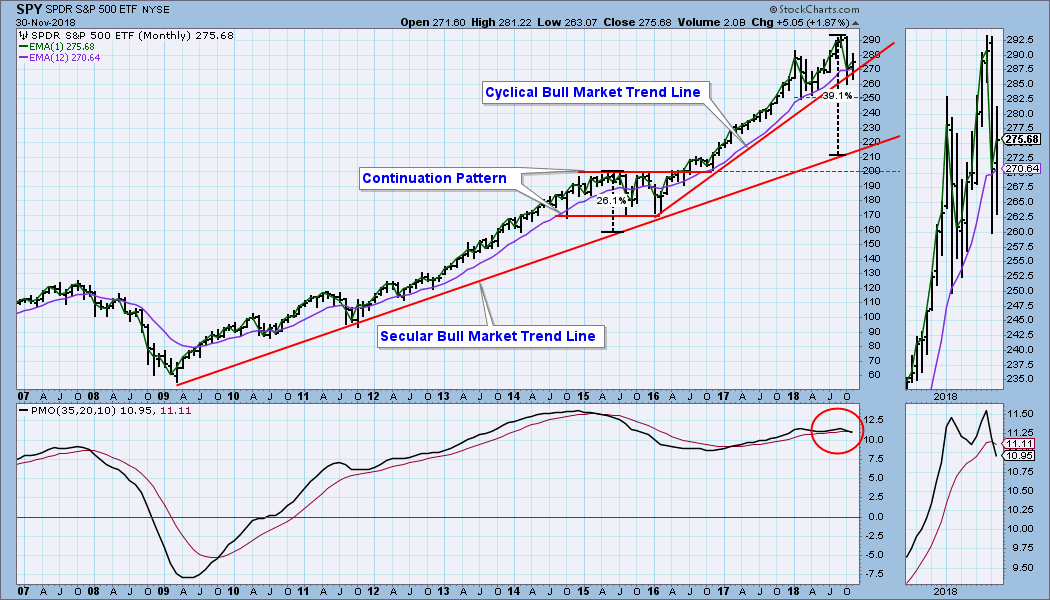 Short-Term Market Indicators: The STO-B and STO-V are overbought. If the market rallies a few more days, they will be very overbought. 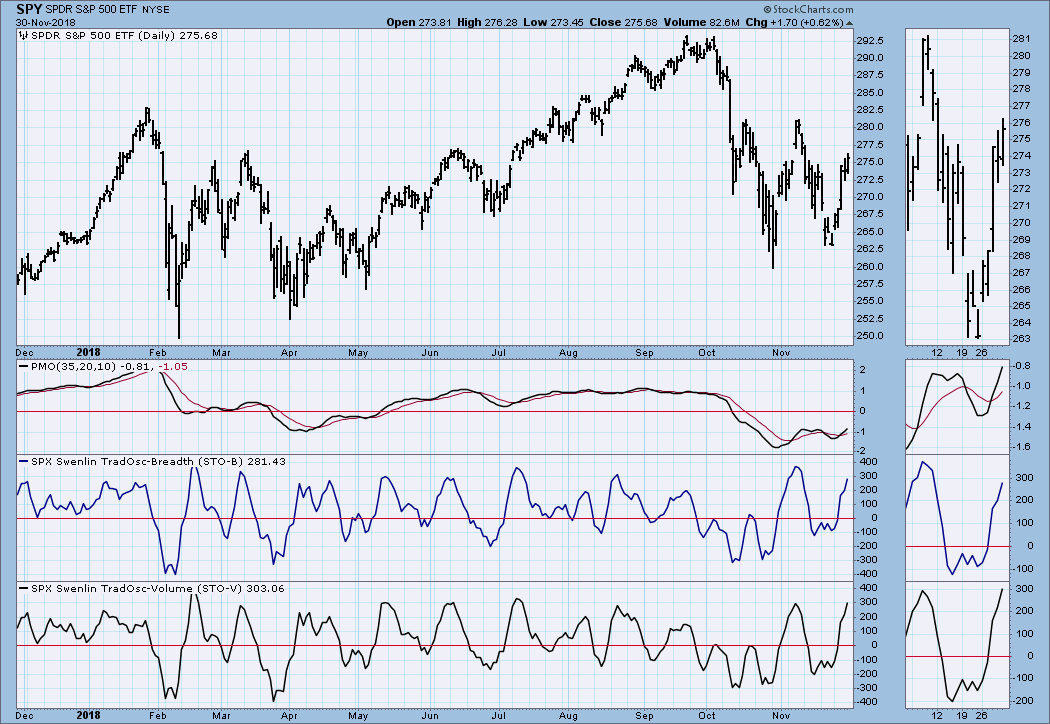 Intermediate-Term Market Indicators: These indicators all have positive divergences against the SPY double bottom. This is definitely a positive picture. The promise of the longer-term negative divergences across the January and September tops has been sufficiently fulfilled by the October decline, but there could be more downside to come. 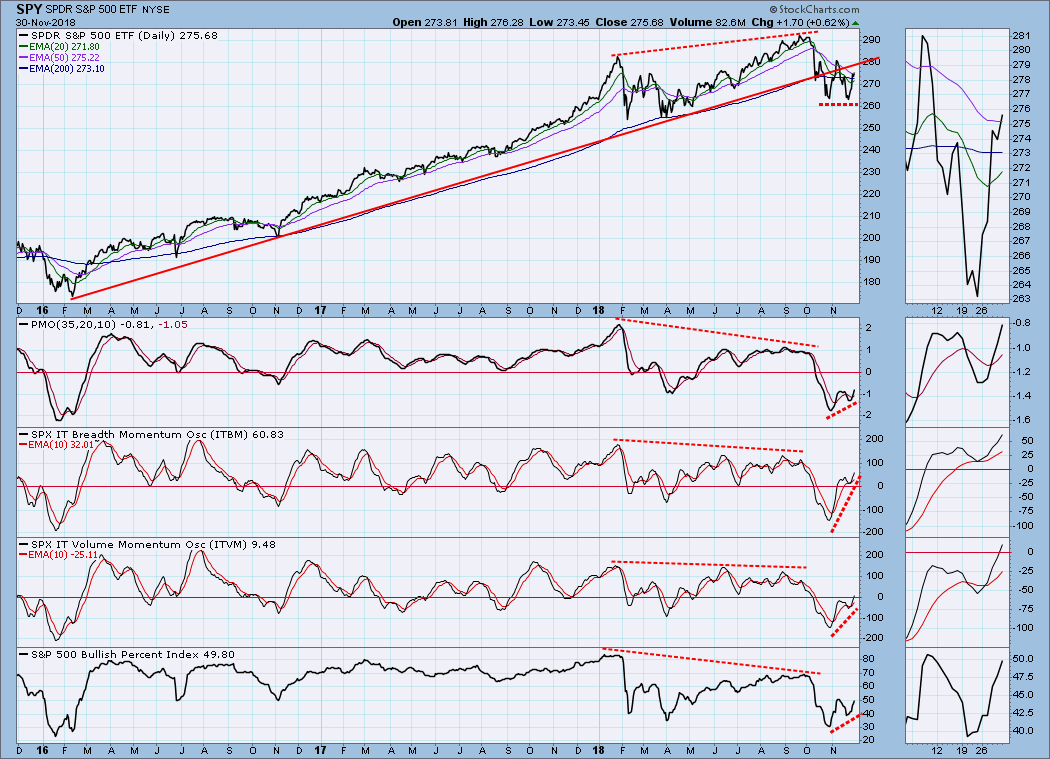 CONCLUSION: The S&P 500 hasn't had a "Death Cross" yet (50EMA passes down through the 200EMA), but 51% of S&P 500 components have. I continue to believe that we are in a bear market; however, recent price action has certainly been encouraging for the bulls. The promise of the positive divergences on the chart just above has been partially fulfilled, but the short-term indicators are becoming overbought, and time could be running out on the rally. It will take an advance of just +6.5% for the market to make new, all-time highs, but, if I am right about the bear, it's not going to happen.

UUP Daily Chart: UUP looks as if it is trying to top. Note that the last rally failed before reaching the top of the rising trend channel. Price fell back to the rising trend line, and I thought the trend line would fail. But UUP is taking another run at that resistance. We shall see. The daily PMO is positive and flat, showing modest strength. 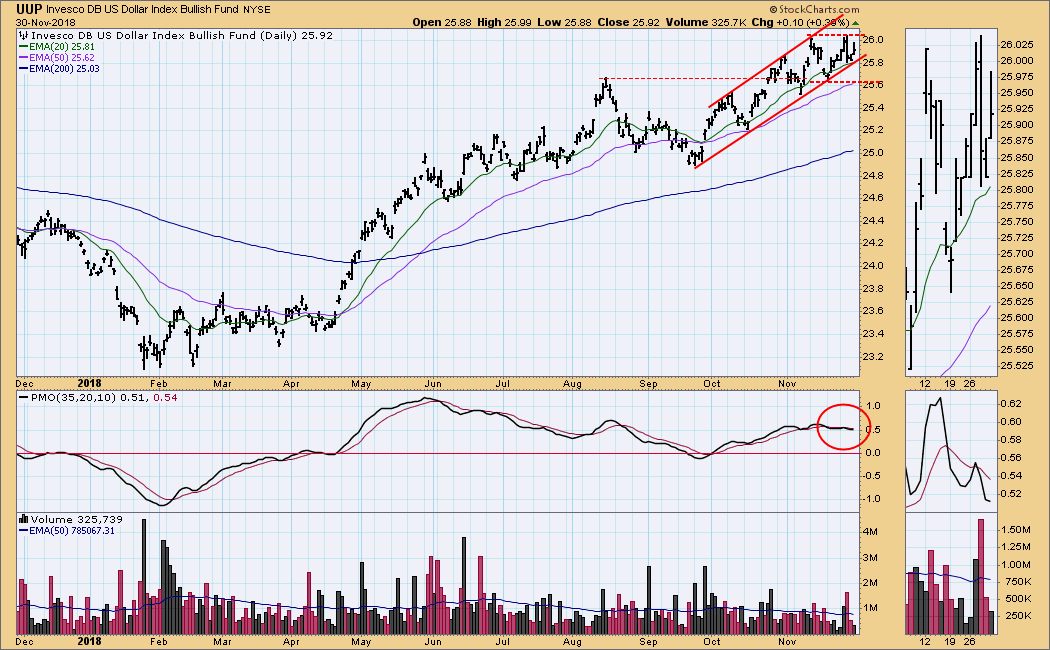 UUP Weekly Chart: The rising wedge formation persists, but price is working hard to get through the top. The weekly PMO is positive. 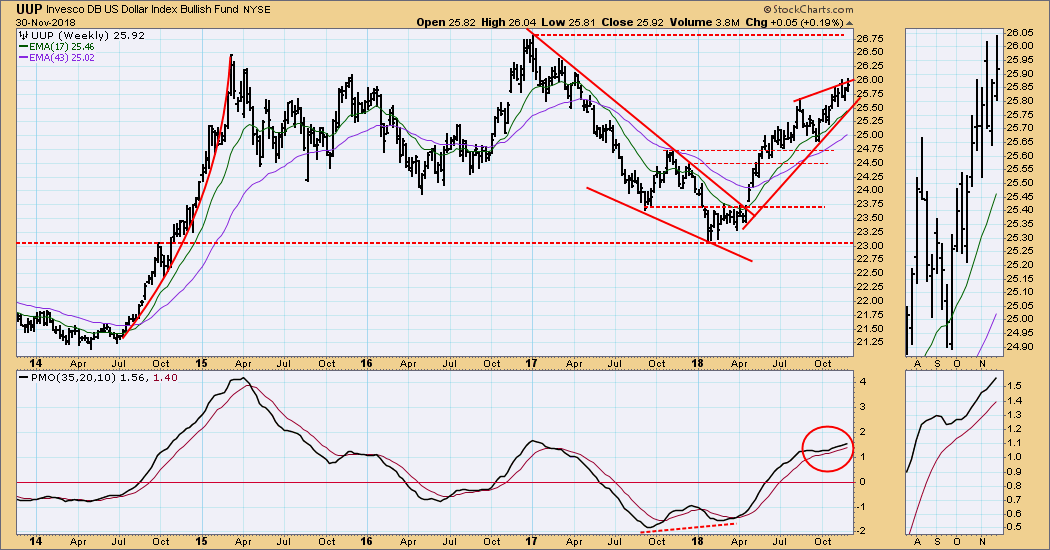 $USD Monthly Chart: The dollar ($USD) is rising above a long-term rising trend line drawn from the 2011 low. Definitely positive in this time frame. 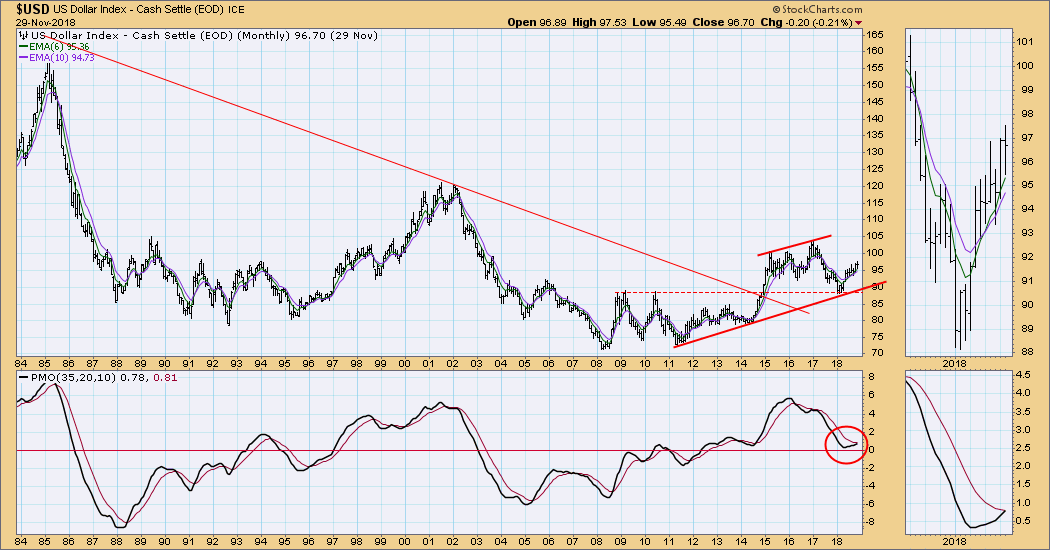 GOLD Daily Chart: Gold is barely positive in this time frame -- the 20EMA and 50EMA are barely maintaining the BUY signal, and the daily PMO is running flat just above the zero line. The one hopeful part of the picture is that the dollar may be topping, and gold is negatively correlated in this time frame. 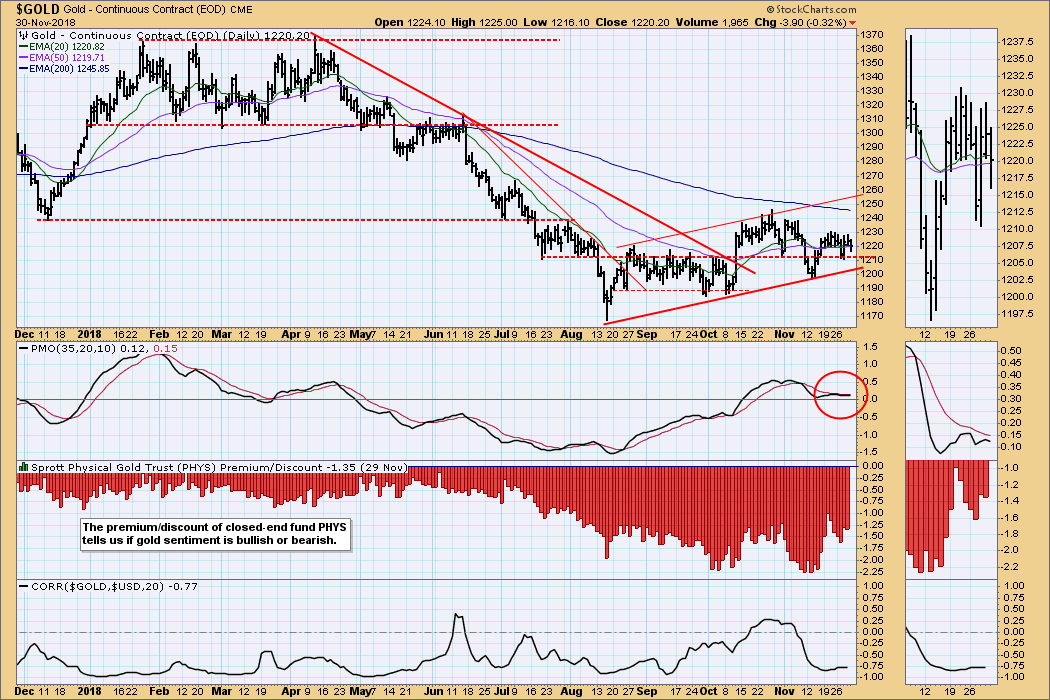 GOLD Weekly Chart: Gold is rallying off the August low, but the bad news is that it has formed a bearish reverse flag. The PMO is above the signal line and rising, but the angle of ascent is very shallow. 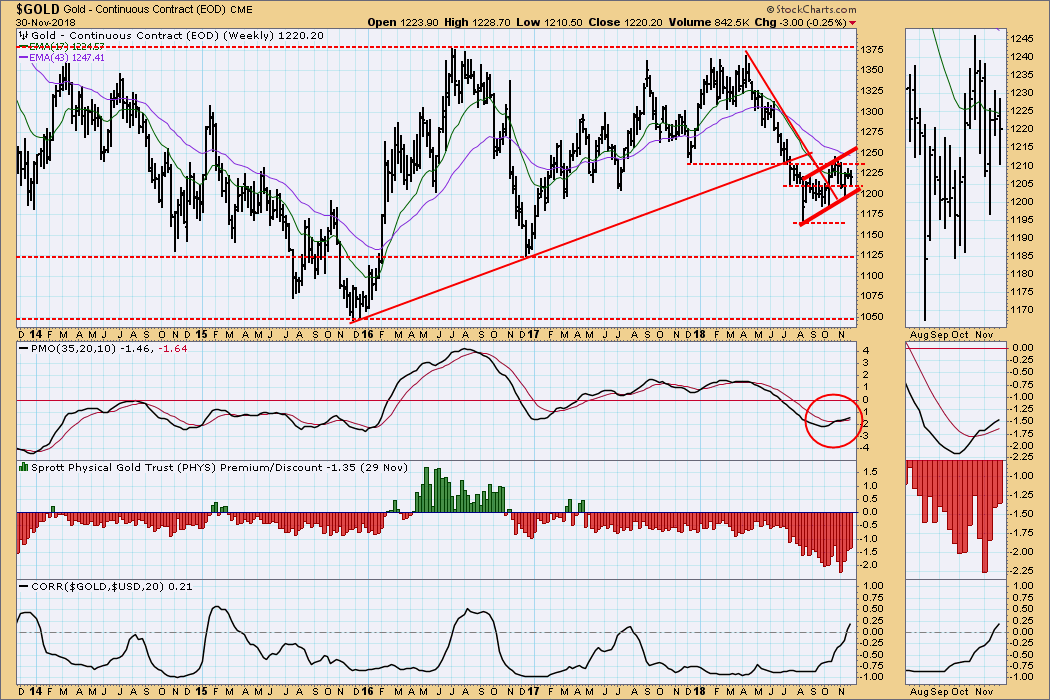 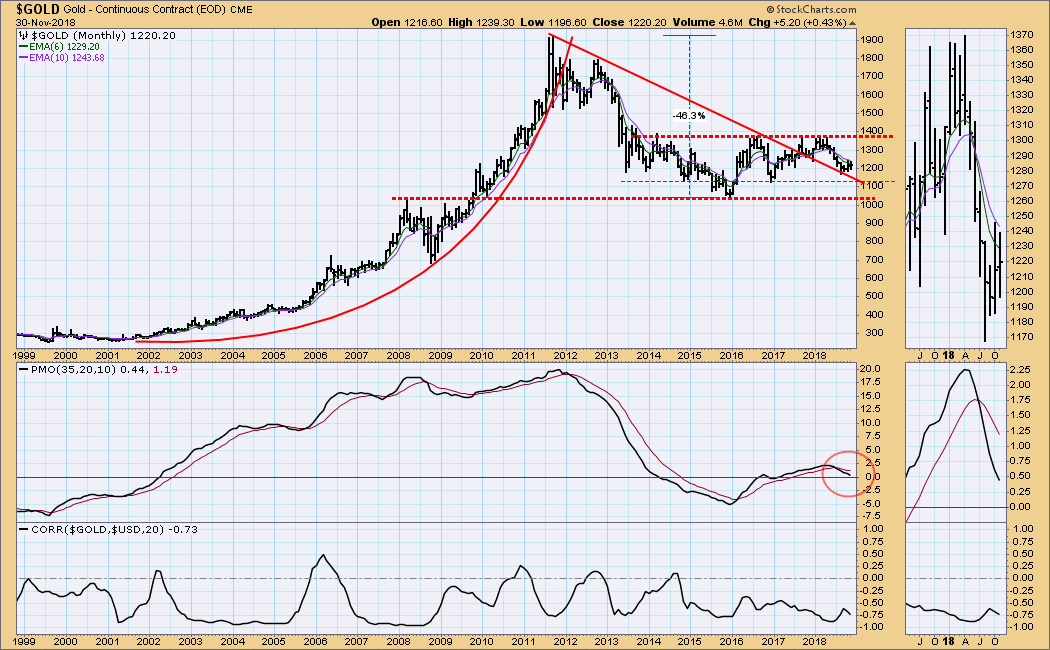 USO Daily Chart: The daily PMO is trying to bottom at its lowest point in almost three years. After a -35% decline from the October top, a PMO bottom could flag at least a short-term buying opportunity. 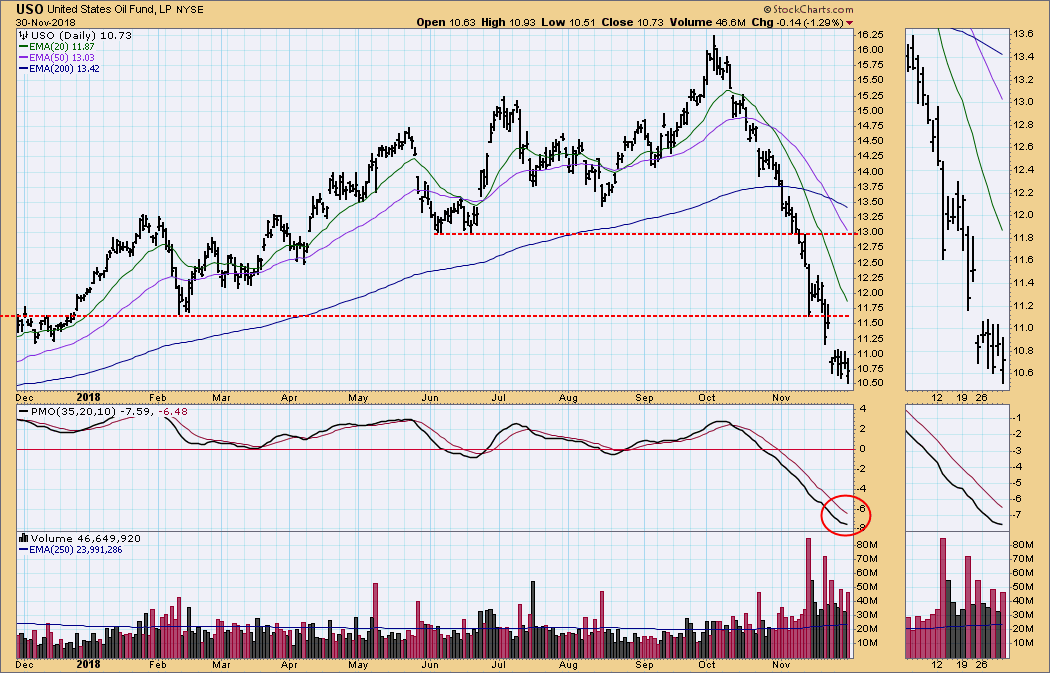 USO Weekly Chart: The weekly PMO has crossed down through the zero line, and the next best looking support for crude is around 40. 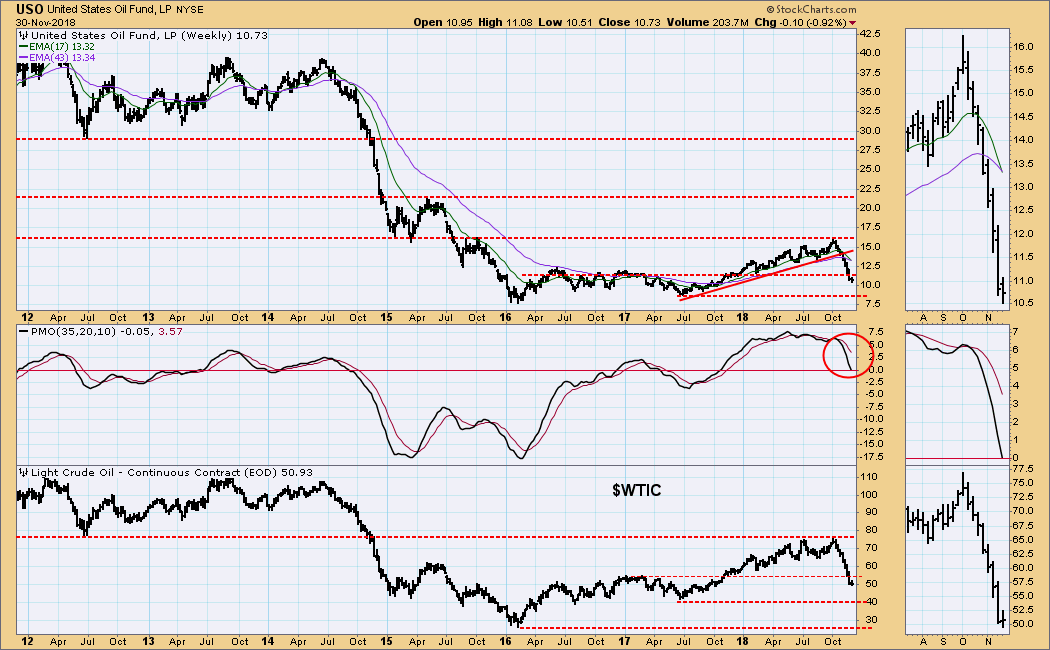 USO Monthly Chart: Crude ($WTIC) has been turned back at the bottom of a broad zone of resistance, as well as the declining tops line drawn from the 2008 top. There is long-term support between 30 and 40, but it could settle somewhere above that zone. The monthly PMO has topped sharply, so the decline may continue. 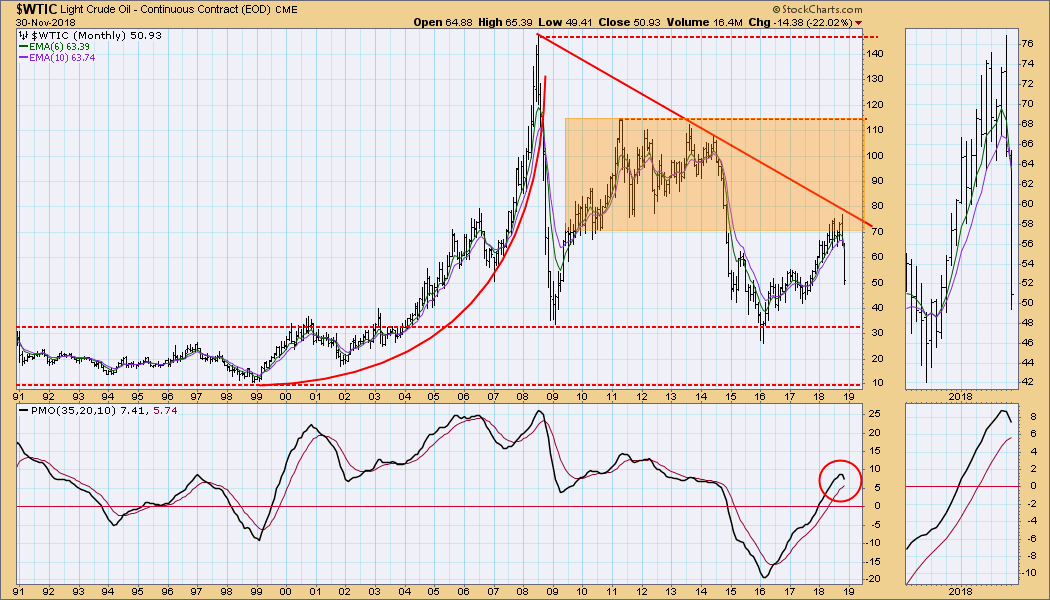 TLT Daily Chart: A rally from the double bottom has stalled at the confirmation line, which is actually an extension of a line of resistance drawn across the February and May lows. TLT is in a bear market (50EMA is below the 200EMA), so I'm expecting the rally to fail. 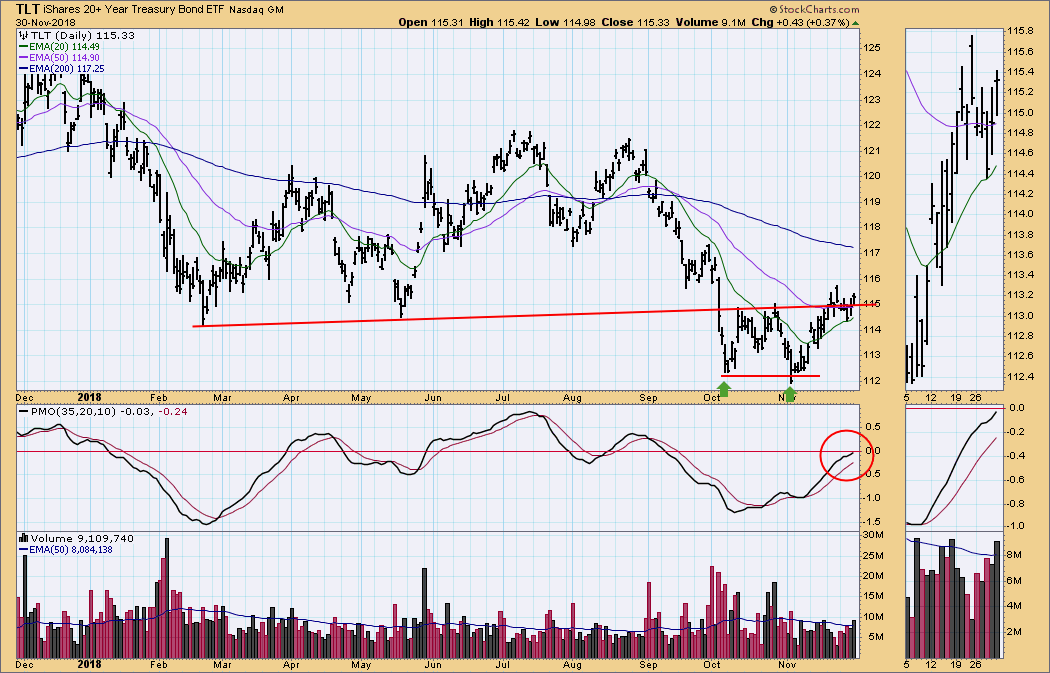 TLT Weekly Chart: The head and shoulders pattern has executed, and I'm still expecting to see a decline toward the minimum downside projection. The weekly PMO has bottomed, but it is on a kind of shallow ascent. I'm looking for the decline to resume. 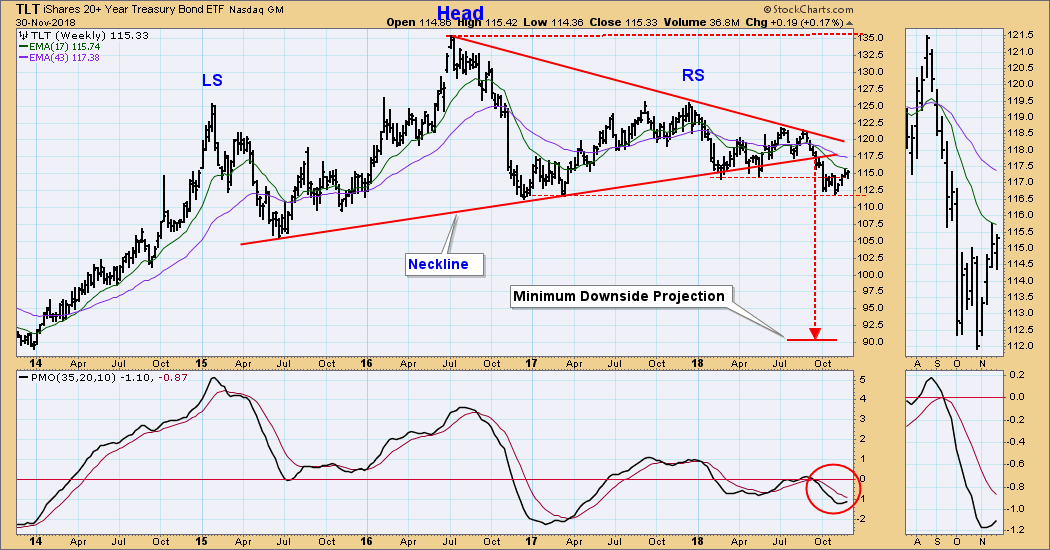 $USB Monthly Chart: Price has reached the bottom of the rising trend channel and has had a small bounce. With the monthly PMO below the zero line and declining, trend line failure is my expectation. 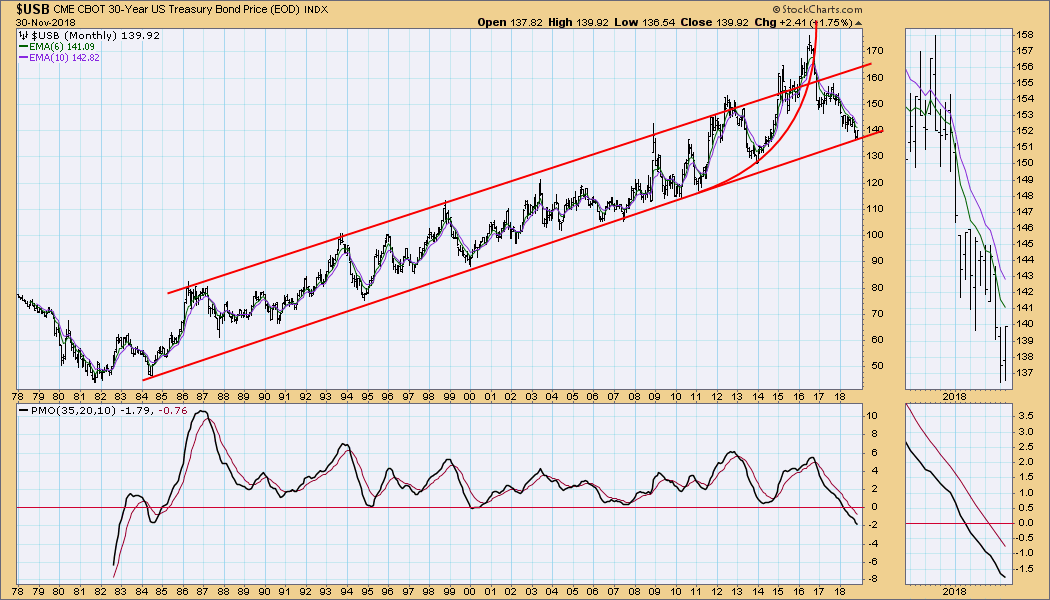