There will probably be a lot of people mentioning that today there was a "Death Cross" on the S&P 500 chart, and this is important because a Death Cross means that the price index has entered a bear market. Specifically, on the $SPX chart (not shown) the 50-day simple moving average crossed down through the 200-day simple moving average (SMA). I don't use SMAs because I believe exponential moving averages (EMAs) behave more rationally. And for signal generation and trading decisions I track SPY instead of $SPX, which can actually be traded. Also, like stocks, SPY is adjusted for distributions, which reflects the total return of the index. As you can see on my chart, there has been no 50/200EMA downside crossover yet. I think that it is inevitable, but it could quickly be avoided if SPY were to rally above the EMAs, because that would cause the EMAs to turn up and begin separating again. That wouldn't necessarily happen with an SMA because of the way they are calculated. (See the Chart School article on moving averages for more info.) 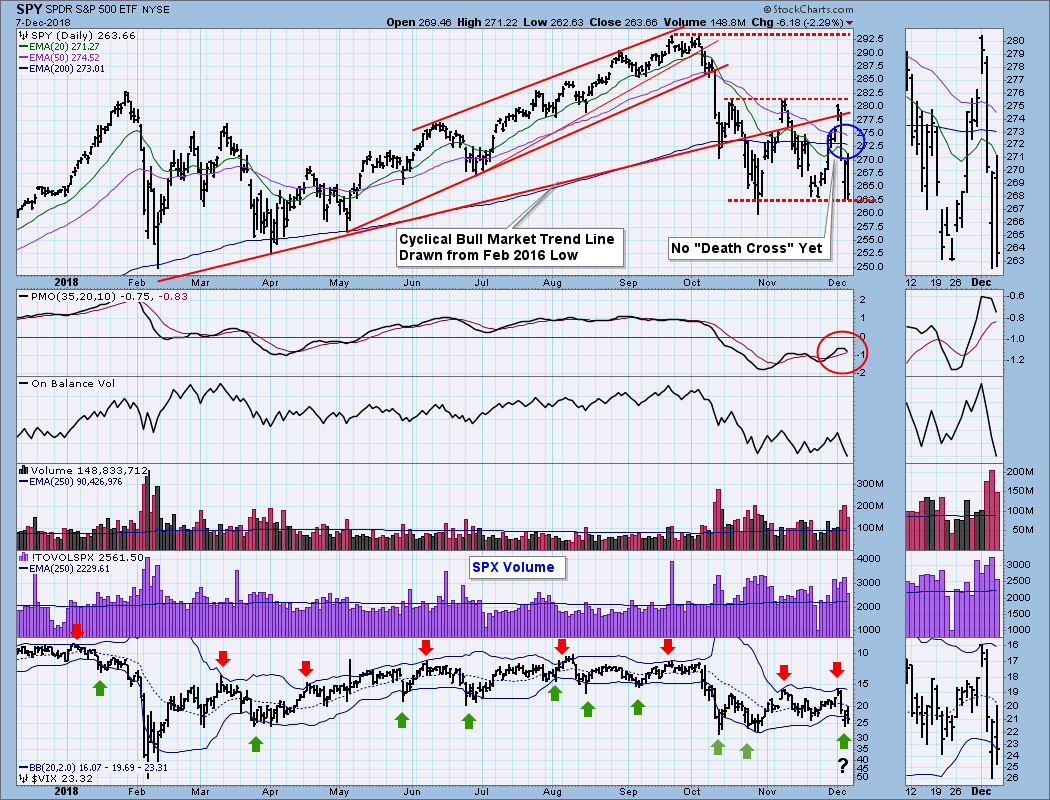 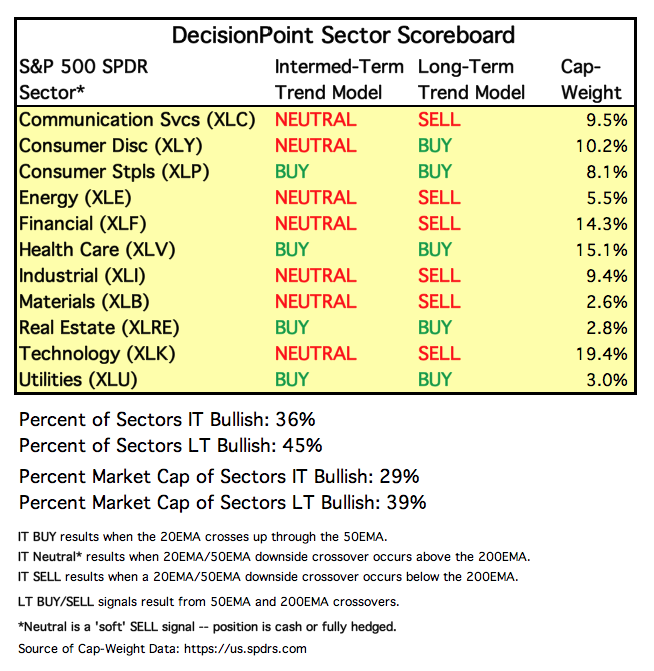 SPY Daily Chart: In addition to my comments in the opening paragraph, there are a few more things worth mentioning. Price remains in a trading range that is nearly two months long and 7% deep. This is referred to as a continuation pattern, which means that price is consolidating prior to resuming the down trend. In the shorter-term, note that volume contracted on today, which could mean that selling has been exhausted. 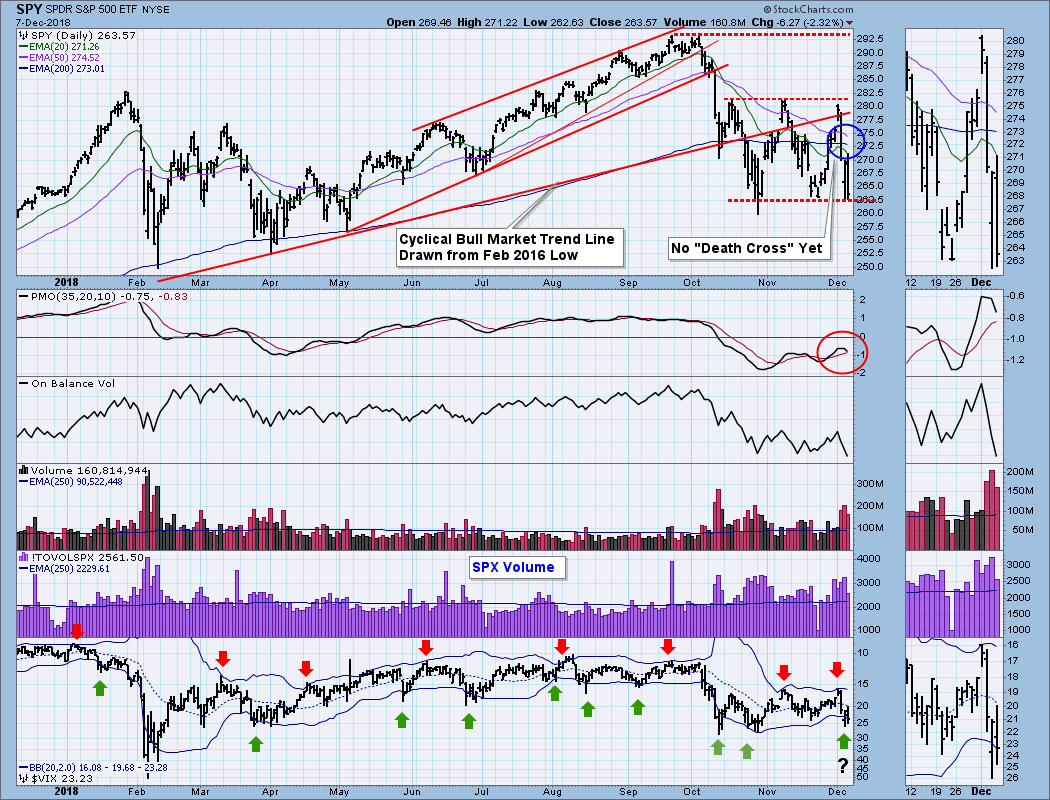 The bottom panel on the above chart is the VIX (inverted). When the VIX touches or penetrates either Bollinger Band, it should alert us to expect a price reversal soon. There are exceptions, like in January/February and again in October. After a period when the bands narrowed, the VIX  made contact with the lower band and pushed it significantly lower. This week we see a similar setup, but I have put a question mark under the last green arrow because, considering recent market action, we need to be alert for possibly another "push down" caused by more selling.

SPY Weekly Chart: While the cyclical bull market rising trend line has been broken, SPY did not continue the decline, but has been consolidating for weeks. 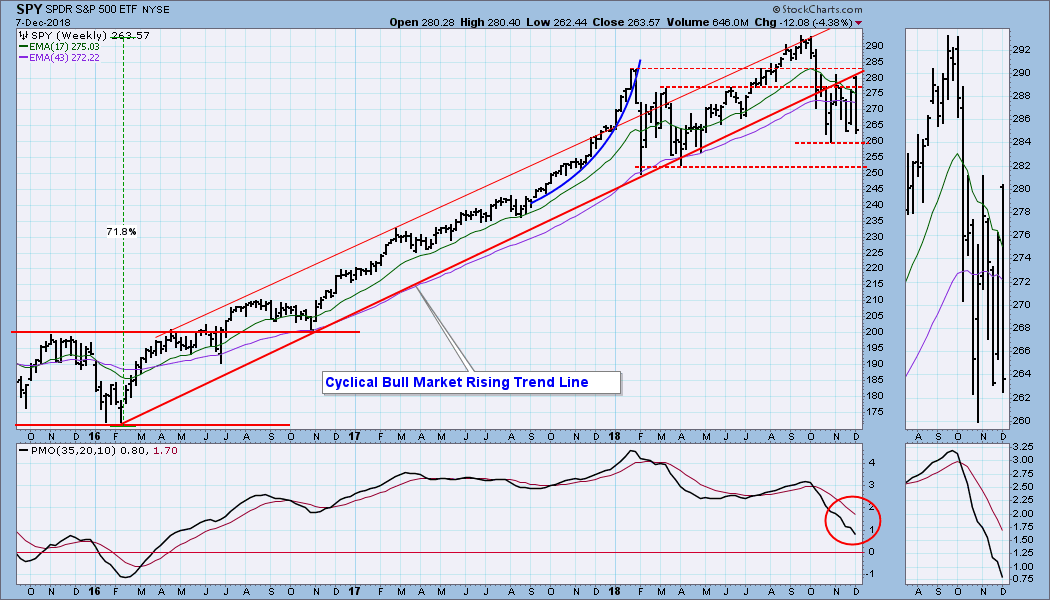 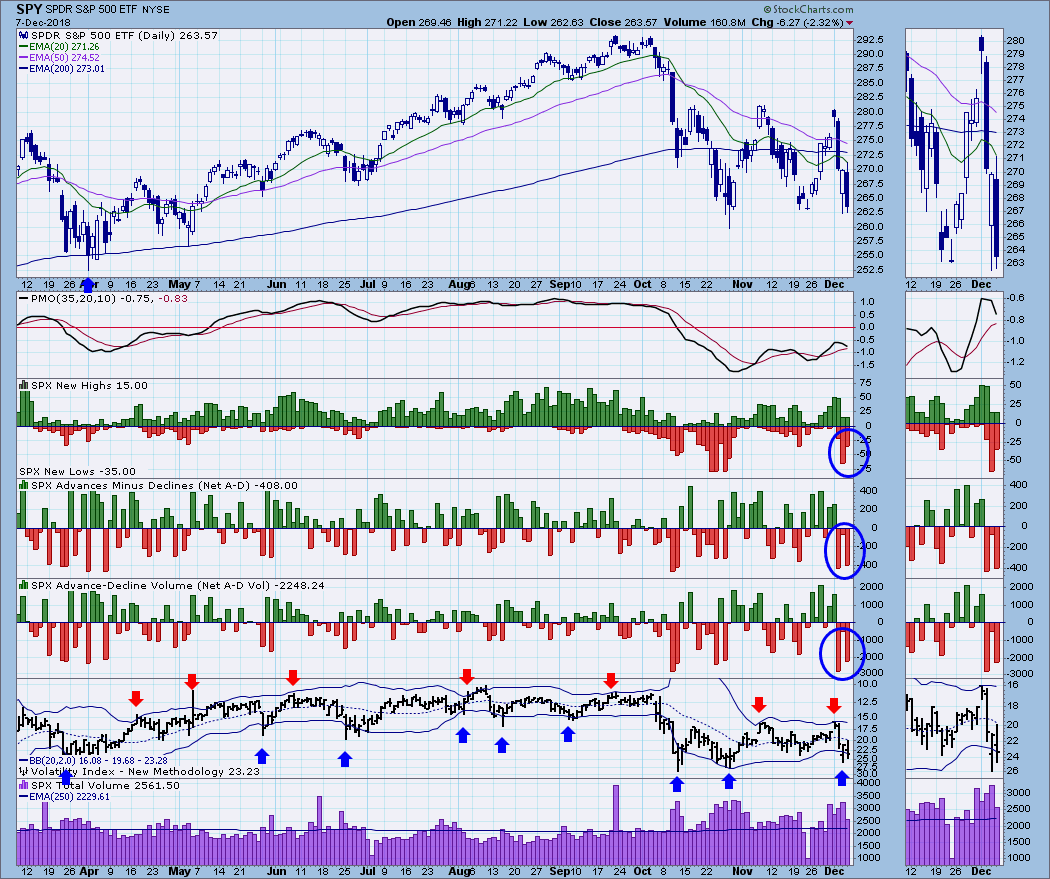 Short-Term Market Indicators: The STO-B and STO-V are neutral, but they are low enough to be considered oversold. If the bear persists next week, they will go lower. 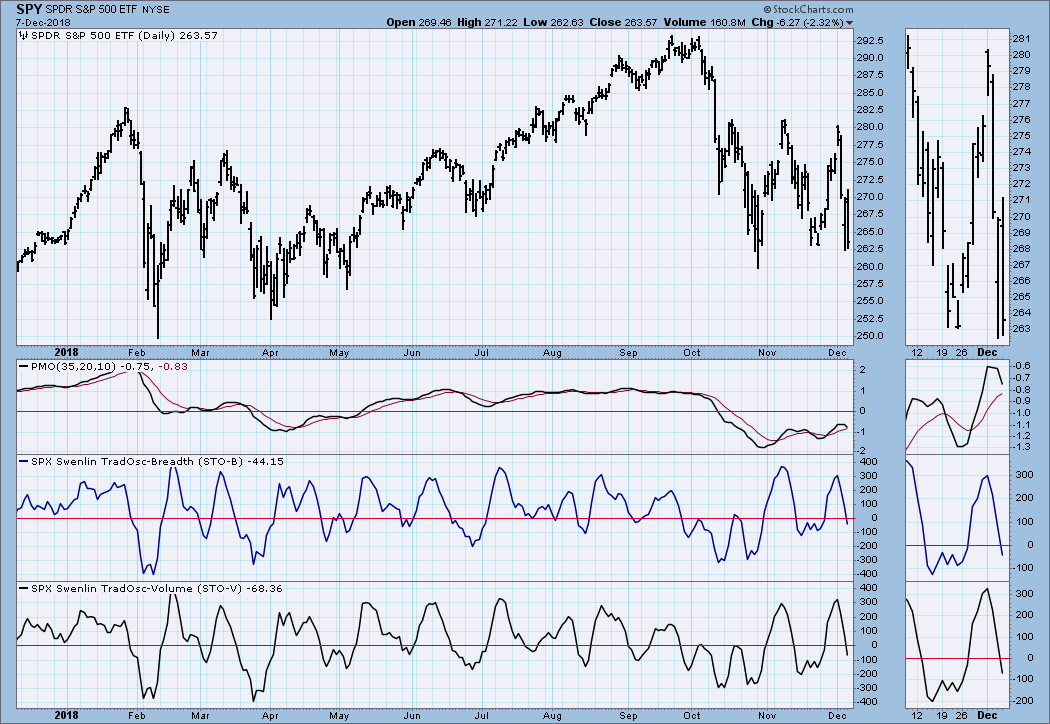 Intermediate-Term Market Indicators: The positive divergences abound, but keep in mind that sideways price movement has permitted these indicators to work their way back to the neutral zone. Instead of a rally from oversold lows to new, all-time highs, we got furious sideways chop. 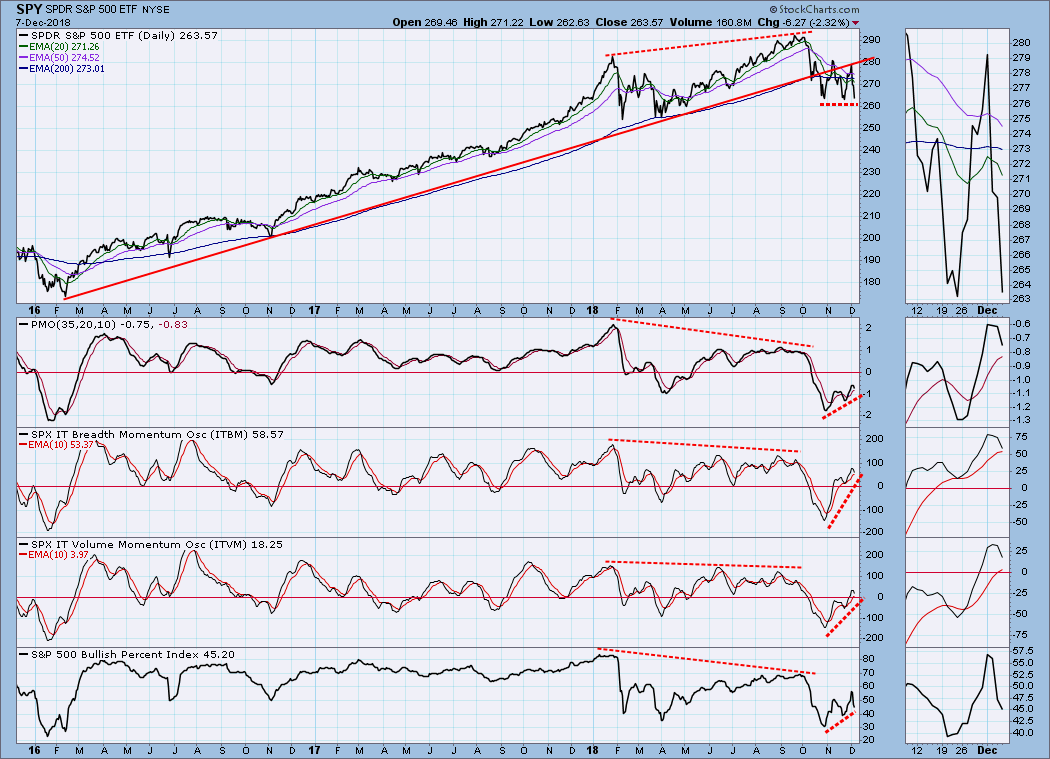 CONCLUSION:  It has really been an interesting two months (interesting as in the Chinese proverb). The market has declined about -11% from the September top, but most of the time, about two months, has been spent in a trading range. Trading ranges can be boring, but the problem with this one is that it is very wide -- about 7%  between the top and bottom, which is a lot of real estate to traverse in the sharp price swings we have experienced. This week was probably the worst.

Once again we are at the bottom of the trading range and wondering if the bottom will hold. Being in a bear market, I have to assume that sooner or later we're headed lower. The ultra-short-term indicators allow for a little bounce next week. The intermediate-term indicators have cleared their oversold conditions of over a month ago, so they could accommodate more selling. Since I believe we're in a bear market, I expect the market is headed lower, although the path it takes will probably prove to be "interesting."

UUP Daily Chart: Price looks as if it will top or begin moving sideways. 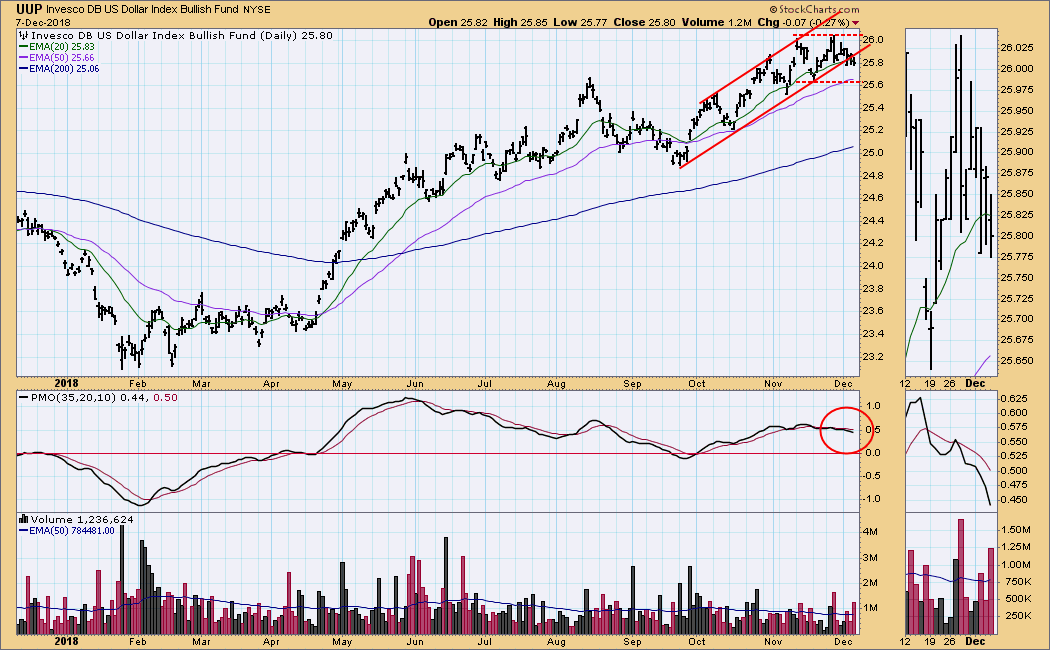 UUP Weekly Chart: We have been watching the bearish rising wedge formation for several weeks. Since the weekly PMO has topped, we could be seeing the wedge break down in the near future. 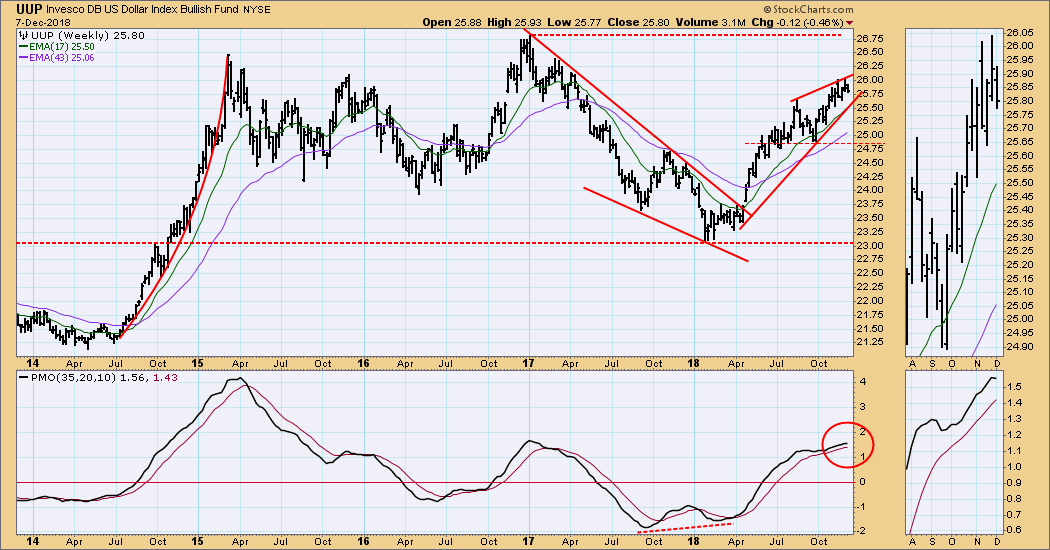 GOLD Daily Chart: Gold has crossed up through its 200EMA, and the daily PMO is positive. Price is close to the top of a rising trend channel, so there my be another pullback on the way. 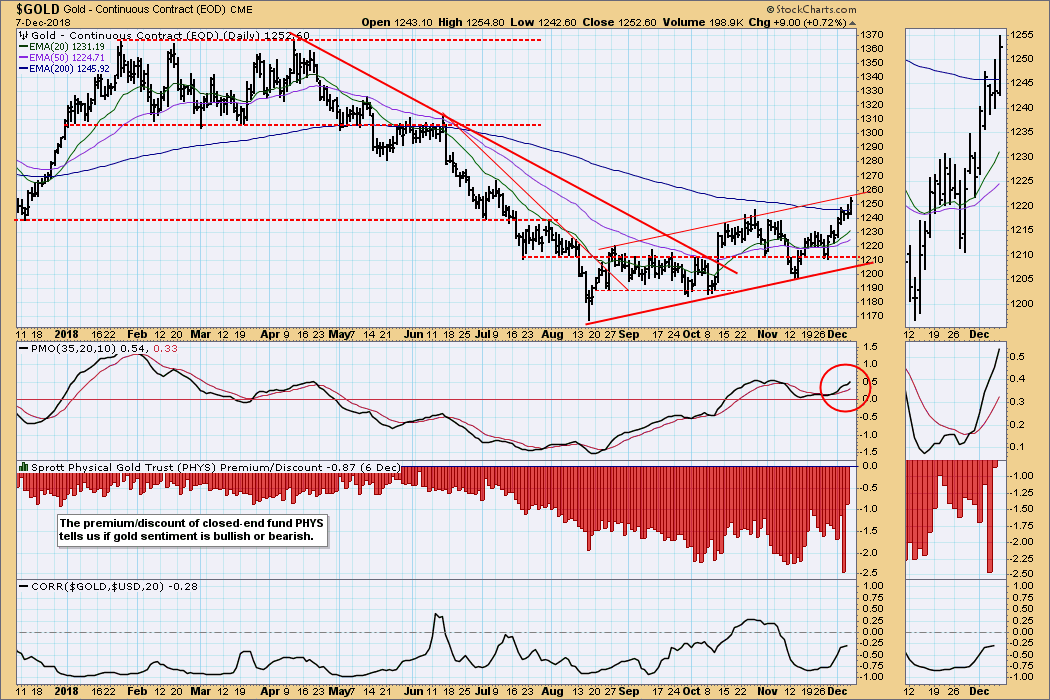 GOLD Weekly Chart: The rising trend channel we noted on the daily chart looks a lot like a reverse flag formation on this weekly chart. The weekly PMO is above the signal line and rising, so I will keep my modestly positive outlook for gold. 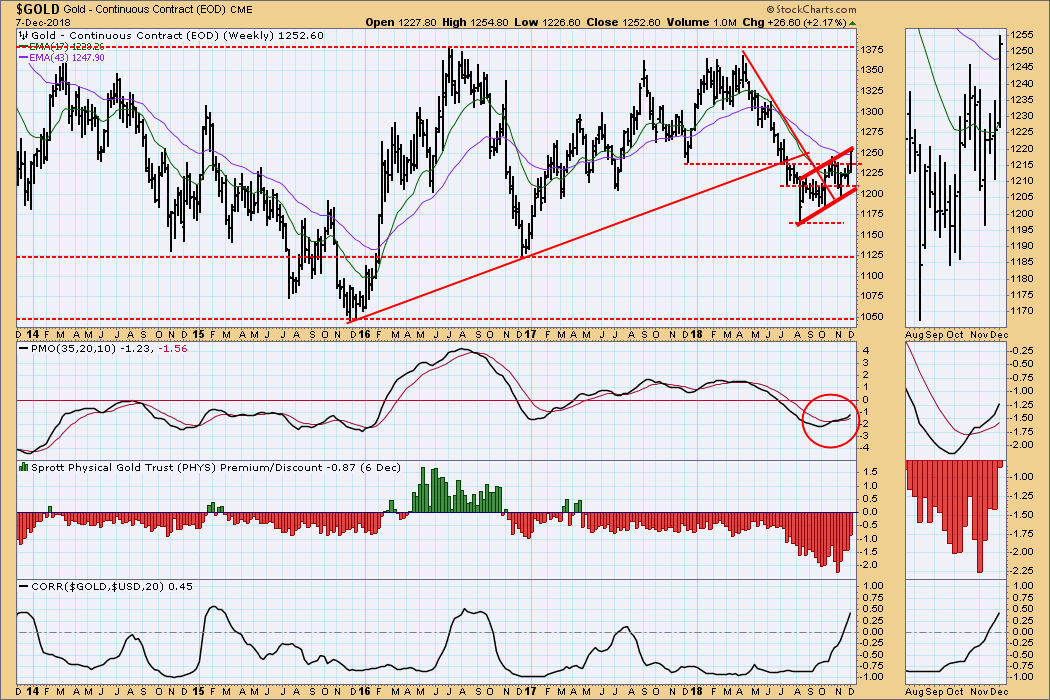 USO Daily Chart: There seems to be good psychological support at 10.50, which is the equivalent of $50 oil. There is a fairly solid looking bottom on the daily PMO, and USO is currently in bounce mode. Horizontal resistance is just ahead, and price has already encountered (and been turned back from) the declining tops line. 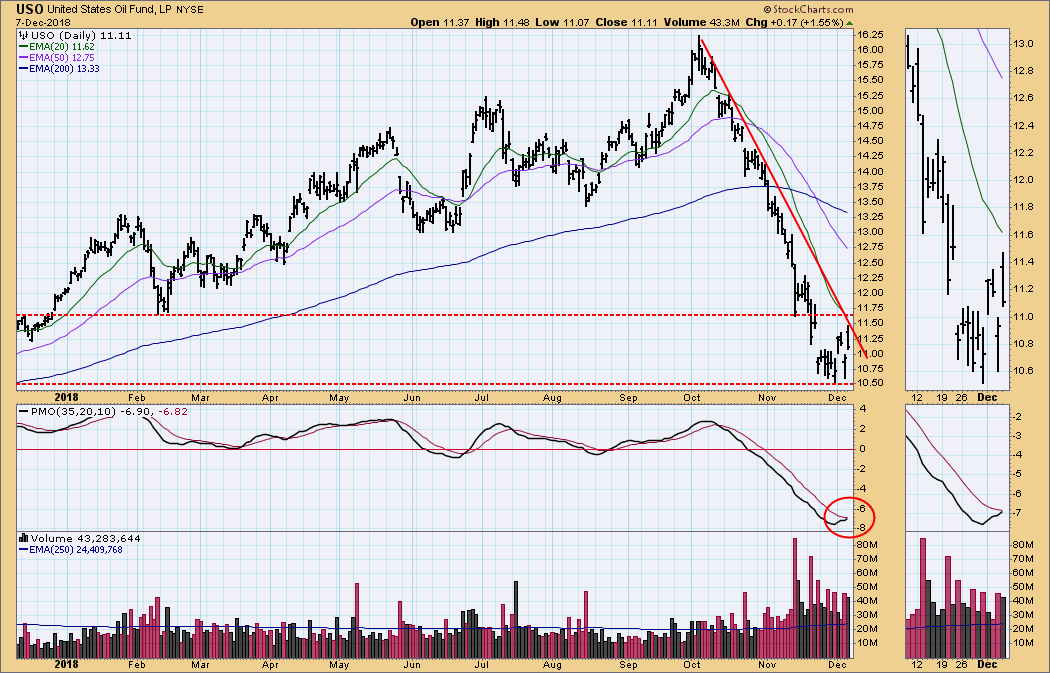 USO Weekly Chart: Crude ($WTIC) has broken down through support drawn across the 2017 tops, and $50 seems to be the current support level, although there seems to be no obvious technical reason for that. Note that the weekly PMO has not even begun to attempt a bottom, so we may be looking at $40 oil in the near future. 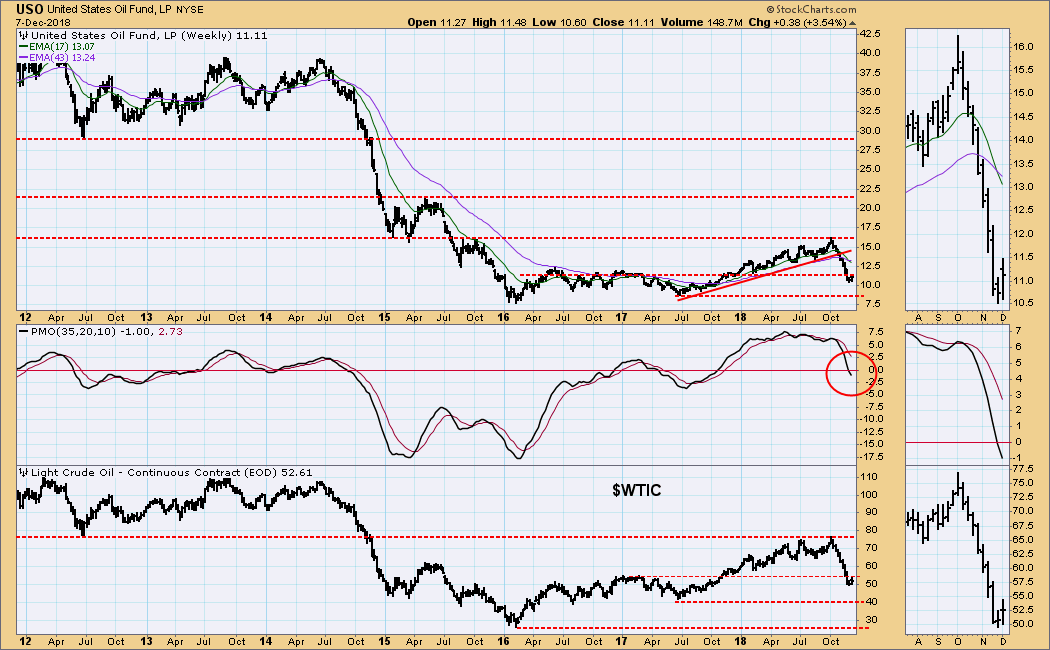 TLT Daily Chart: After some period of struggle with the double bottom confirmation line, TLT had a strong breakout, strong enough to exceed the minimum upside projection and change the IT Trend Model signal to BUY on Thursday (20EMA crossed up through the 50EMA). Even though the LT Trend Model remains on a SELL signal, price is above the 200EMA, so the picture is quite positive. 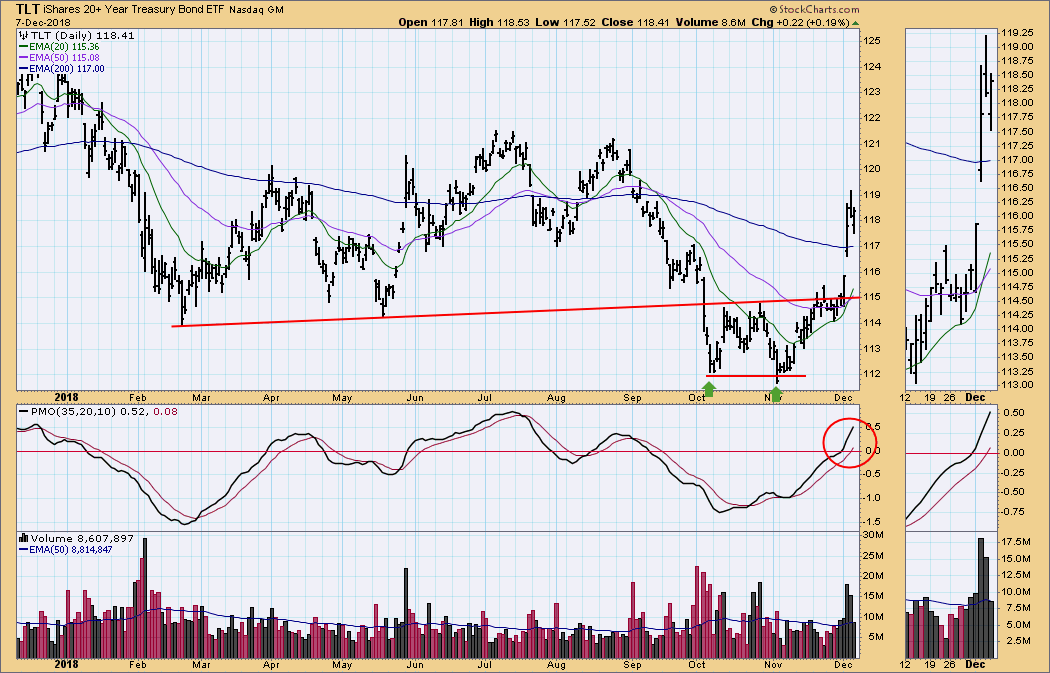 TLT Weekly Chart: Well, this week's rally blew the bearish head and shoulders theory out of the water, but now we see a bearish descending triangle. However, the weekly PMO has bottomed and is just about to cross up through the signal line, so a bullish resolution looks more likely for this setup. 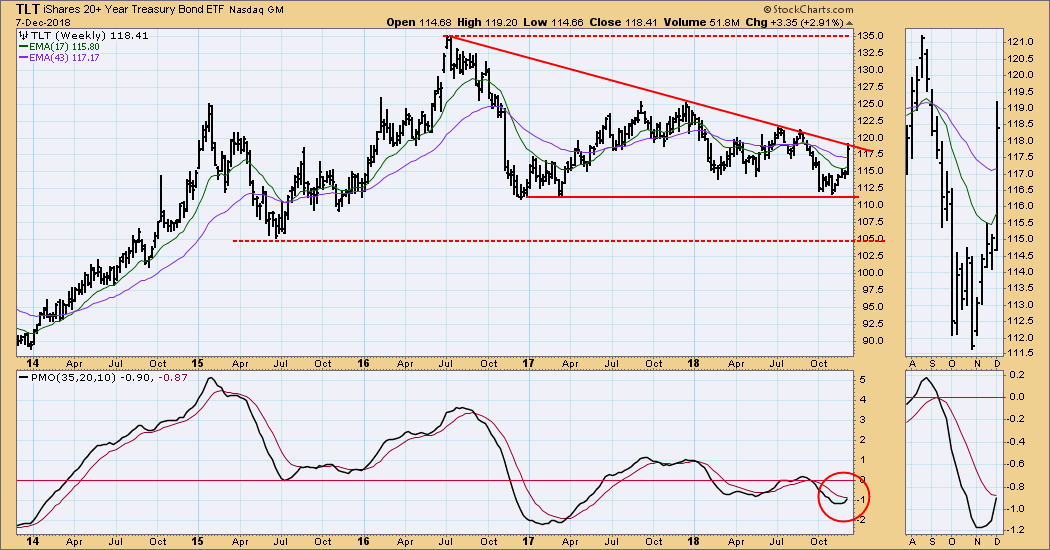