One of the important technical advantages that a technician can use to prevent losses is by studying how parabolic moves fail. Here is a long term chart of the $NIKK in Japan. 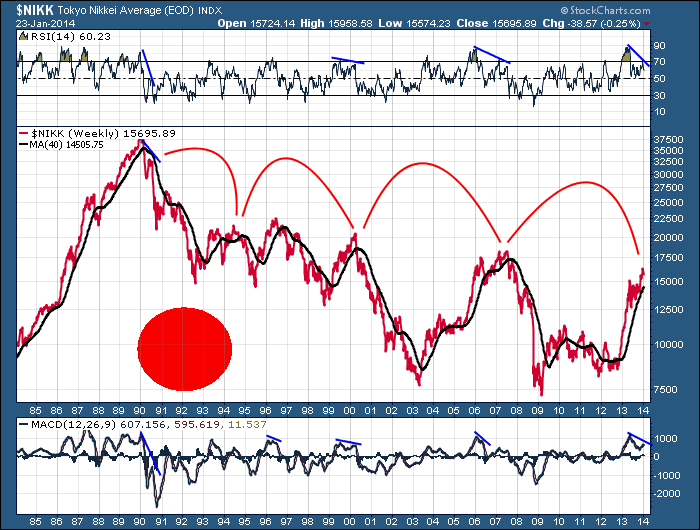 When the MACD and RSI put in a lower high on the second peak or attempt to break through the previous high, investors should be very cautious. It takes time to form, but waiting for the MACD to roll over on the weekly chart is usually better than shorting as it makes a higher high. The $NIKK has been a bouncing ball of lower highs since 1990. The government debt, the demographic issues, the destruction of their energy systems at Fukushima, the closing of the rest of their nuclear facilities for a period of time all weigh on the country.

Last year, as the Yen plummeted, the stock market soared. So we had this sudden move higher in 2013, which I would call parabolic. The background is in place for a swift drop as parabolic moves are usually retraced in a dramatic fashion. I would be very cautious on expecting the $NIKK to go higher here. Let's look at a closer view. 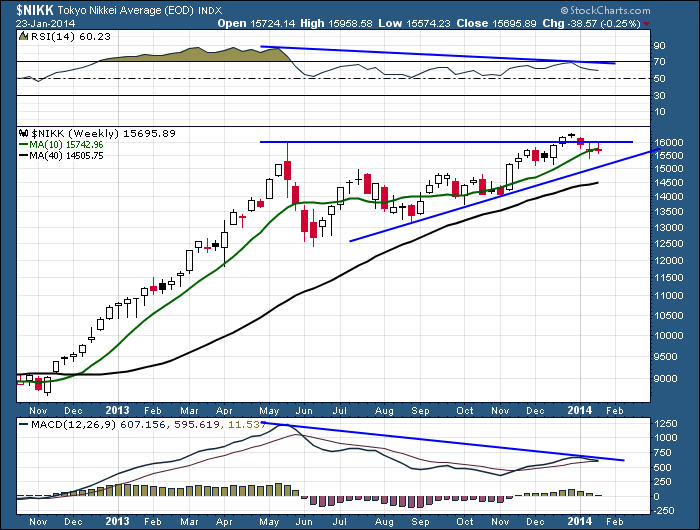 The price of the INDEX soared from 9000 to 16000 in 6 months.Then a quick 20% correction showed up and the $NIKK started to bounce in June.  The market surged above 15000 and then it ran out of momentum as it exceeded the previous highs. Now the $NIKK has jogged higher, but could not stay above the previous high. So at this point we can get very suspicious that this might fail again like it has done the 5 times before on the long term chart.

This morning the $NIKK closed the week out below the 10 WMA shown in green. It closed at 15391. We can see the MACD only needs to move a little lower to actually cross. That should happen when this chart updates later today. The $NIKK was down almost 2% on Friday. It will close the week below the 10 WMA after failing to hold on to a new high. Investors staying long the $NIKK with much lower momentum on this secondary high should be very cautious. Maybe it reverses higher, but stops would be prudent. To quote a floor trader in New York, "Sell with regret, but sell."