Lions Gate Entertainment LGF released Divergent as the first in a 3 part trilogy with Insurgent and Allegiant yet to come. The stock was also divergent.

One of the great qualities of the stock market is the investors try to buy early for a big move up or sell early when they don't see new catalysts for the stock. We would like to see if that behavior reflected in the stock price of Lions Gate Entertainment. Perhaps the title of the movie will be the plot of the stock.

First glance, the investors don't expect the next Harry Potter series here. After being in a strong up trend, the stock made a double top near $38. The importance of the chart information at that time suggested caution. The uptrend line divided the double tops so something might be changing. The longer the trend line and the more touches on the trend line defines the strength of the trend line.

When the stock failed to hold the $34 area, investors knew Divergent was ready to be released. The MACD at the bottom of the chart told us the stock was ready to be released too. The dotted line pointing to the MACD reveals a significantly lower momentum on the final high.  When the stock failed to get back above $34 as the release date approached, this looked more and more ominous. After dropping from $38 to $28 or losing 25% of its market cap, the investors were not hoping for much. 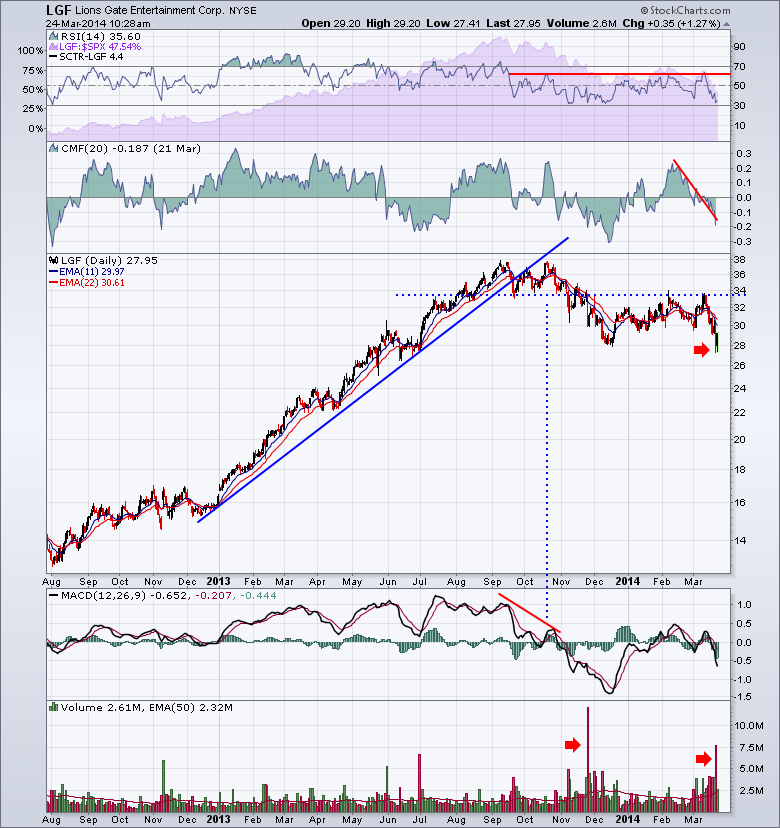 So the movie opened as #1 in the box office this weekend after breaking to new lows on Friday. Look at the recent price action on a 60 minute chart in Chart 2. The CMF or 'Money Flow' is clearly negative for the vast majority of the last 2 months. We probably knew that from the price action as well.

The most interesting part of the chart is the orange circled area the week of March 10. The stock tried to rally to a new high and change from a downtrend to an uptrend. We can see looking left that it got stuck at the same price level as the first week of February move up. You may remember that all stocks surged the first week of February. The important clue for basic technical analysis is: Can the stock make higher highs and higher lows? The right answer is no at this time. 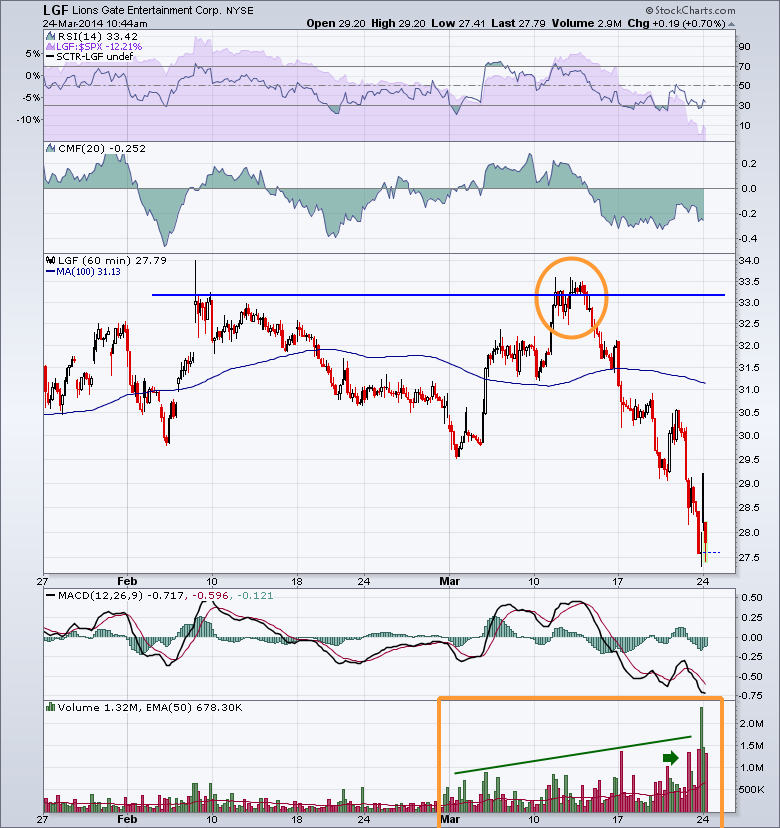 The volume surged through March as investors sold. Today may mark a high volume day and investors could watch for a reversal to the upside as it was a critical date for the stock. At this point I would still be a seller until it can start changing direction. Divergent price action was definitely on display long before Divergent was released.

Deeper pockets may have the courage to pick it up here. The next two movies in the series are Insurgent and Allegiant. We will have to watch for any 'surge' in the stock by new investors and find out if they can get a renewed 'allegiance' to the stock like they had in early 2013. At this point investors are not very enthused by the opening weekend, even though it was #1.